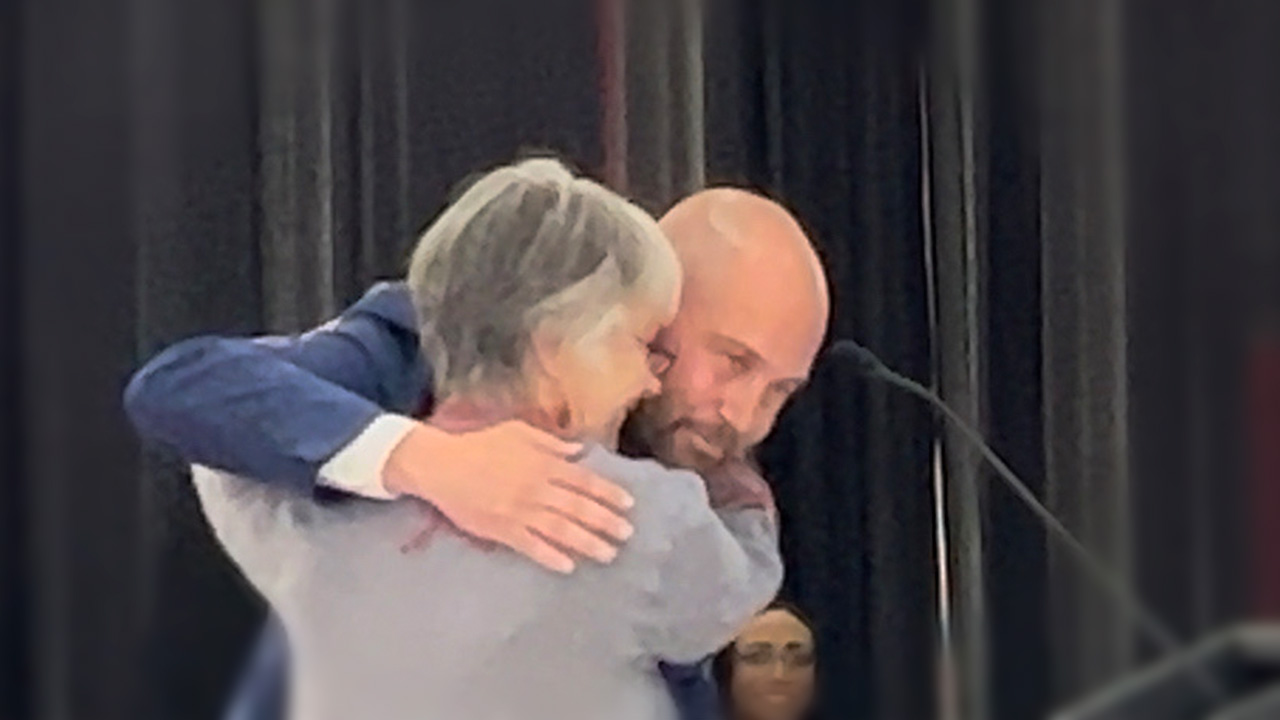 His mother, Trudy Thom, administered the oath of office, which Levine took while holding his “bible” — “A Geography of Time,” a book written by his late father, Fresno State professor emeritus and renowned social psychologist Robert Levine.

Levine told GV Wire afterward that one of his first priorities as a School Board member will be to hold a community meeting for the Fresno High region, which has not had a trustee since the death last July of longtime board member Carol Mills.

“The seat’s been vacant for several months, so I think it’s important for people to hear from me,” he said. “They’ve heard from me one-on-one hopefully, (so) to hear from me in this new role, and for me to hear from them.”

Levine said he’ll need to hit the ground running because high school commencements, including Fresno High’s, are on the near horizon, and the School Board will finish the 2022-23 school year budget by the end of June.

The cafeteria at McLane High School, where the swearing-in and School Board meeting were moved to after a sewer pipe leak closed bathrooms in the downtown Education Center, was crowded with many of Levine’s supporters. Some, he said, have known him since he was a baby and growing up in the Fresno High area.

Thom, who made several large contributions to her son’s campaign, was unable to vote for him because prior redistricting moved the family home into the McLane region. But she’s hoping that the latest redistricting, which will be in effect over the next decade, will let her vote for her son two years from now when the seat is up for election.

Levine was elected to a two-year term that will complete the remainder of Mills’ original four-year term after her reelection in 2020.

A check of the redistricting map that the board approved in January indicates Thom might get her wish — her Old Fig Garden home now sits one block south of the boundary between Areas 5 and 7, putting her back into the Fresno High region.

The local winners are Fresno High student Mandy Yang and Clovis East students Mishaila Peña, Jaylene Peña, and Floreida Uriarte. The topic for both was suicide prevention. Yang’s film is titled “Call Me,” and the Clovis East film is titled “It’s Okay Not To Be Okay.”

The Fresno and Clovis projects, which tied for first place in the regional competition, are advancing to the statewide competition.

Students who created a first-place winning film will be recognized at a virtual ceremony featured at 7 p.m., Tuesday, May 17, in a Facebook Live event: https://fb.me/e/4iB3XD33p.

The program is part of statewide suicide prevention and mental health efforts funded by county agencies and administered by the California Mental Health Services Authority. The annual art and film contest encourages young people to be mindful of their mental health and seek help for themselves and their peers.

Want to see the two local projects? Here they are:

Call Me from Directing Change on Vimeo.

It’s Okay To Not Be Okay from Directing Change on Vimeo.

This Program is Looking for Student Leaders — And Potential Leaders

Ed100 Academy for Student Leaders is looking for high schoolers who will devote three days of their summer vacation to learn more about leadership and civic engagement.

The virtual event is free and will be held June 20-22, but students must register by the June 8 deadline.

Sponsors say attending the Ed100 Academy particularly could benefit students who might become candidates for the State Seal of Civic Engagement, and are urging all high schools to participate and to register at least one freshman, sophomore, and junior student.

So far in Fresno County, only University High and the California Virtual Academy at Fresno in Orange Center have registered students, according to Ed100’s database.

Fresno State’s Eric Rodriguez is one of four undergraduates winning a scholarship provided by the Association of California Water Agencies.

Rodriguez, who won a $3,500 scholarship, is a plant science major. The scholarships were awarded to students pursuing degrees in water-related fields of study.

He and the other three scholarship winners were recognized last week during ACWA’s 2022 Spring Conference and Exhibition in Sacramento.

The PG&E Corporation Foundation is seeking applications for its Better Together STEM Scholarship Program, with a total of $250,000 to be awarded to students studying science, technology, engineering, or math.

As in past years, the program is open to applicants attending California colleges and universities. This year it’s being expanded to include students attending Historically Black Colleges and Universities anywhere in the U.S.

Scholarships will be awarded based on academic achievement, demonstrated participation and leadership in school and community activities, and financial need. Qualifying degrees in STEM disciplines include engineering, computer science/information systems, cybersecurity, and environmental sciences.

High school seniors or graduates, students with a GED certification, current college undergraduates, and nontraditional students and military veterans are eligible to apply. Applicants must live in or be a dependent of a resident in Northern or Central California.

The deadline to apply is June 3, and the awards will be announced in August. For more information and to apply, click here.