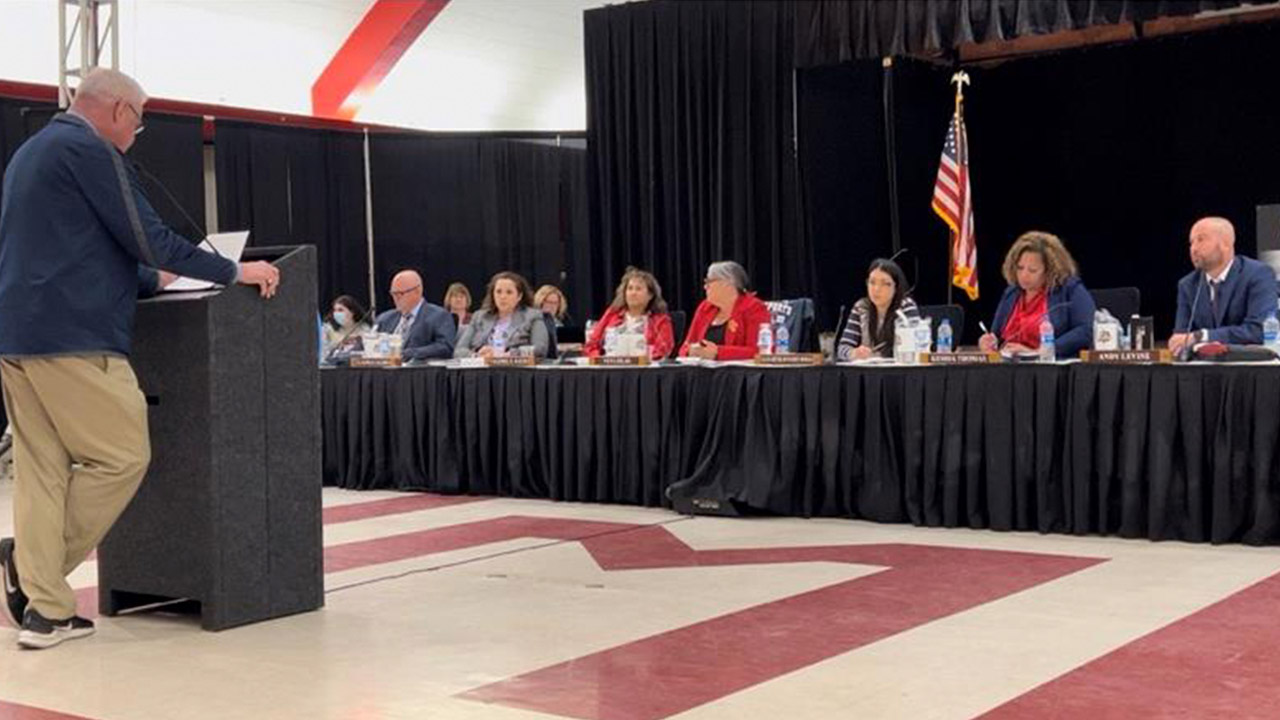 Slatic left the dais at the board meeting to speak at the podium, where members of the public stand to address the board.

“Those following along at home, please note that you are watching an elected board member having to speak at the podium, requesting speaking time as a citizen,” he said. “That’s never happened in the history of California public education as far as I can find, because every one of your 1,000 school boards in this state have periods during meetings for the elected representatives of the people to speak on the record about subject matter, that they, as the elected representatives or the people believe is important to communicate to the public. Except this district, the third largest in the state.”

Up until recently Fresno Unified board meeting agendas had traditionally included time for trustees to raise issues, praise constituents, and make other comments during “board-superintendent communication.”

But after two incidents involving Slatic — his self-described filibuster at an August board meeting and then his refusal to stop talking over a community member who was trying to speak at a chaotic meeting in February — led to the premature and abrupt endings of both board meetings, board president Elizabeth Jonasson Rosas eliminated that part of the agenda.

The unscheduled public comment period, which traditionally had been scheduled near the top of board agendas, is now the final agenda item. That change also was recent and came after multiple meetings at which dozens of speakers showed up to criticize the board over mask and vaccine requirements, poor academic performance, and other topics, delaying the board from considering action items on the agenda.

Yield Time to Next Speaker

Slatic’s extended comments Wednesday were enabled by members of the Duncan family — Edison student Griffin Duncan and his parents — who, one by one, yielded their time to the next speaker. After the Duncans, Slatic was the next speaker.

But by then Jonasson Rosas had conferred with the board’s attorney, who told her she had the discretion of whether to allow each speaker’s three minutes to accumulate or to cap the yielded time. She opted to limit Slatic’s time to six minutes.

Slatic started off by labeling the description by some people of the board’s decision to remove cops from middle schools as a cost-cutting move while schools were closed during the pandemic as a “a bunch of bovine scatology.”

The decision, he said, was in fact a political anti-cop statement that was especially popular among those people “on the political left with aspirations of higher office.”

Slatic noted that there were more police officers (one) monitoring Wednesday night’s board meeting at the McLane High School cafeteria than could be found at any of the district’s 17 middle schools, and he warned that the lack of police presence could leave a Fresno school vulnerable to a mass shooting incident such as have occurred at other schools across the nation.

He cited an example: On June 4, 2021 a man with a gun “and a long criminal record” entered the Cooper Middle School campus.

He said that although he has been asking for months to have the restoration of police on middle school campuses put on a board meeting agenda for a vote, he was told by Jonasson Rosas that it’s not “within her purview.”

When Slatic concluded his remarks, Jonasson Rosas noted that she “briefly” considered responding to him, but “there’s so many inaccuracies that it would take too much of the time.”

The School Board has in recent months had public conversations about restoring police officers on middle school campuses. But Police Chief Paco Balderrama told the board at a previous meeting that the department now does not have sufficient officers on the payroll to provide school resource officers at middle schools.

Although the department is in the process of expanding, it would be a while before the district and police department could sign a new school resource officers contract, he told the board.

The district continues to have a contract with Fresno Police for school resource officers on high school campuses.

How Are the Sheriff’s Candidates Faring in the Fundraising Battle?