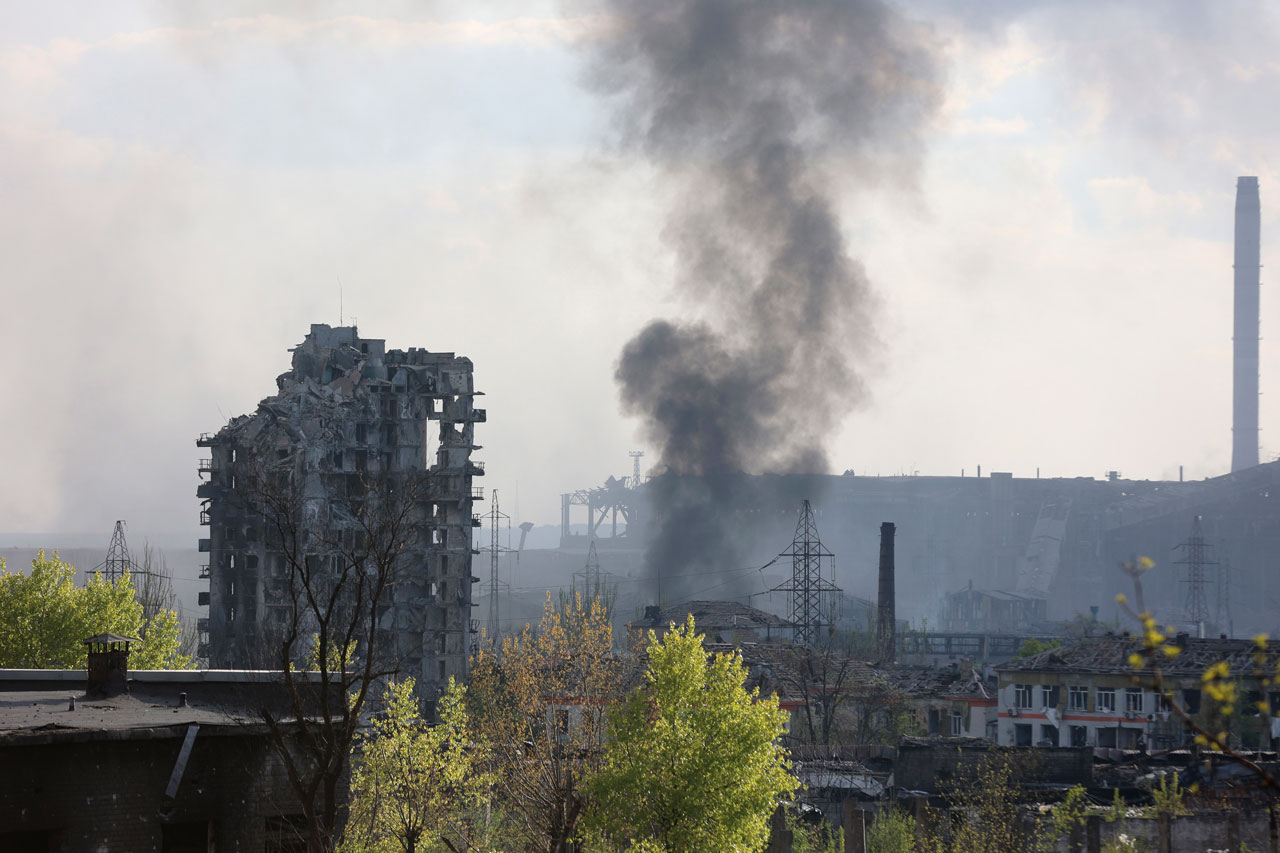 Smoke rises from the besieged steel plant in Mariupol, Ukraine, on Wednesday, May 4, 2022. (AP/Alexei Alexandrov)
Share with friends

MINSK, Belarus — Belarus’ authoritarian President Alexander Lukashenko defended Russia’s invasion of Ukraine in an interview Thursday with The Associated Press, but he said he didn’t expect the 10-week-old conflict to “drag on this way.”

Lukashenko said he and his country stand for peace and repeatedly called for the end of the “war” — a term the Kremlin refuses to use, calling the invasion a “special military operation” instead.

He also spoke out against the use of nuclear weapons in Ukraine but wouldn’t say if Russian President Vladimir Putin had plans to launch such a strike.

Lukashenko said Moscow, which launched the invasion of Ukraine on Feb. 24 — partly from his territory — had to act because Kyiv was “provoking Russia.”

“But I am not immersed in this problem enough to say whether it goes according to plan, like the Russians say, or like I feel it,” he said, speaking at Independence Palace in Minsk. “I want to stress one more time: I feel like this operation has dragged on.”

Lukashenko’s support of the war has prompted international criticism and sanctions against Minsk. Some Russian troops were sent from Belarusian territory into Ukraine, and Lukashenko has publicly stood by his longtime ally, who has pumped billions of dollars into shoring up his Soviet-style, state-controlled economy with cheap energy and loans.

The 67-year-old president struck a calm and more measured tone in the nearly 90-minute interview than in previous media appearances in which he hectored the West over sanctions and lashed out at journalists.

“We categorically do not accept any war. We have done and are doing everything now so that there isn’t a war. Thanks to yours truly, me that is, negotiations between Ukraine and Russia have begun,” he said.

Lukashenko said using nuclear weapons in Ukraine was “unacceptable because it’s right next to us — we are not across the ocean like the United States.”

KYIV, Ukraine — In his nightly video address Thursday, Ukrainian President Volodymyr Zelenskyy described a “catastrophic” lack of access to medical services and medicine in areas of the country under Russian occupation.

In those areas, he said almost no treatment was available for those suffering from cancer and where insulin for diabetics was difficult to find or non-existent. He said antibiotics were in short supply.

Zelenskyy also said that during the course of the war, the Russian military has already fired 2,014 missiles on Ukraine, while 2,682 flights of Russian warplanes have been recorded in Ukrainian skies. He said the destroyed or damaged infrastructure includes nearly 400 hospitals and other medical facilities.

— US announces seizure of superyacht owned by Russian oligarch

— Easy out from steel mill seen as unlikely for Ukraine troops

Follow all AP stories on Russia’s war on Ukraine at https://apnews.com/hub/russia-ukraine

UNITED NATIONS — The United Nations says a third operation is underway to evacuate civilians from Mariupol’s besieged steel plant and the city, which is surrounded by Russian forces.

Secretary-General Antonio Guterres told the U.N. Security Council on Thursday that a third evacuation is taking place and U.N. humanitarian chief Martin Griffiths said its aim is to evacuate more civilians from Mariupol and the sprawling Azovstal steel plant.

The secretary-general negotiated the agreement for civilian evacuations from besieged areas including Mariupol with the presidents of Russia and Ukraine. Guterres expressed hope that continued cooperation with the International Committee of the Red Cross and the two governments “will lead to more humanitarian pauses to allow civilians safe passage from the fighting and aid to reach those in critical need.”

Griffiths told a U.N. pledging conference for Ukraine in Warsaw, Poland, earlier Thursday that a convoy left for Mariupol on Thursday and expects to arrive Friday morning and hopes to evacuate civilians from the Azovstal plant.

KYIV, Ukraine — The Ukrainian army says Russian troops made “unsuccessful” attempts to advance in the eastern Kharkiv and Donetsk regions.

A Facebook post published Thursday afternoon on the official profile of the Ukrainian General Staff says the Russians also continue to launch missile strikes on transport facilities in order to prevent the movement of humanitarian cargo and military-technical assistance. 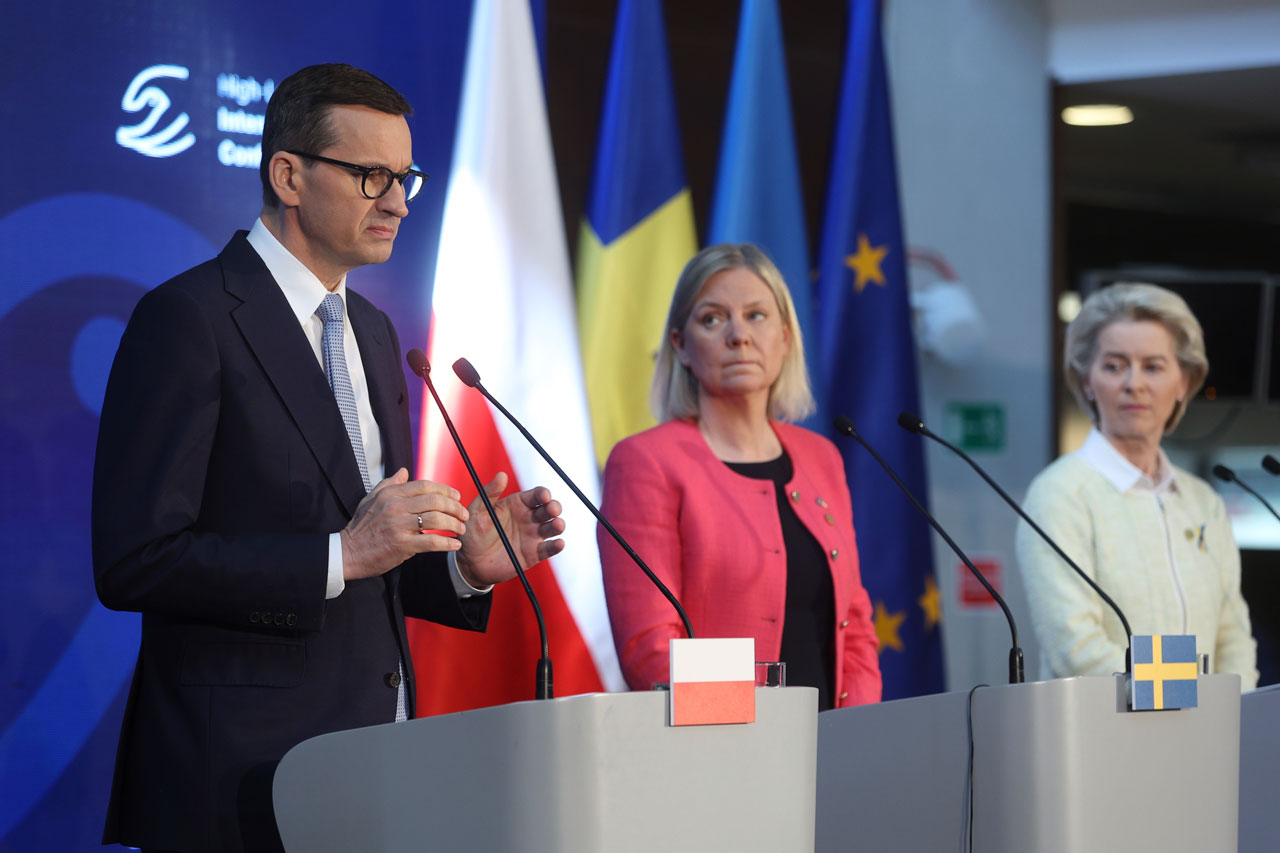 MOSCOW — The Russian military says its air force has destroyed 45 Ukrainian military facilities in the latest series of strikes.

Konashenkov’s claims could not be independently confirmed.

ROME — The United Nations’ food aid agency is appealing for Black Sea ports in Ukraine to be open again to permit shipping of wheat and corn exports, which many poor nations depend on.

The Rome-based World Food Program noted in its appeal Thursday that before the war launched by Russia, 98% of Ukraine’s grain exports had moved through those ports.

It said in a statement that a month after the war began on Feb. 24, export prices for wheat had risen by 22% and maize by 20% — that’s on top of already steep rises in 2021 and earlier this year.

The U.N. agency says the ports, in Ukraine’s south, which have suffered from heavy shelling, must resume operations “to protect Ukrainian agricultural production and enable exports that are critical to Ukraine’s economy and global food security.” It cited war-ravaged, impoverished Yemen, which imports more than half of its wheat from Ukraine or Russia, and which depends on shipping for its food imports.

There was no mention of an apology in the Russian statement on the call.

An Israeli statement says the two leaders spoke by phone Thursday and also discussed plans to evacuate civilians from a besieged steel plant in the port city of Mariupol in southern Ukraine.

A statement from Bennett’s office says Putin “promised to allow the evacuation of civilians, including wounded civilians, through a U.N. and Red Cross humanitarian corridor.”

Bennett spoke to Putin after a call on Wednesday with Ukraine’s President Volodymyr Zelenskyy, as the Israeli leader appeared to renew his role as a mediator in the conflict.

That role was thrown into doubt earlier this week when Russian Foreign Minister Sergey Lavrov suggested Ukraine could have Nazi elements even though Zelenskyy is Jewish, and then suggested Adolf Hitler had “Jewish origins.”

Israelis expressed shock and outrage at the remarks, which appeared to blame the Holocaust on Jews themselves, and the government summoned Russia’s ambassador in protest.

ROME — The Italian government is significantly stepping up its funding to help refugees from Ukraine who arrive in Italy.

Premier Mario Draghi told a high-level donors’ conference, being hosted in Warsaw, Poland, on Thursday by Poland and Sweden, that Italy has already allocated some 500 million euros ($550 million) to help the refugees, but now it has increased that funding to more than 800 million euros.

As of this week, more than 107,000 people, most of them women or children, have fled the war in Ukraine for Italy. In addition to aid already earmarked for Ukraine’s general budget, Italy also plans to lend the war-ravaged country some 200 million euros more, Draghi said.

In addition, Italy has spent some 26 million euros on humanitarian aid such as tents, ambulances, and medicine.

“We will increase the amount of defense materiel assistance that we send to Ukraine,” Finnish Defense Minister Antti Kaikkonen said in a statement.

No details on what types of defense equipment will be sent were released.

Finland, a member of the EU but not of NATO, earlier sent Ukraine bulletproof vests, composite helmets, stretchers, as well as assault rifles, anti-tank weapons, and combat ration packages.

The conference on Thursday was co-hosted by Poland and Sweden and attended by prime ministers and ambassadors representing many European countries, as well as countries further afield and some businesses.

Much of the world has responded to the war in Ukraine with an outpouring of humanitarian support. But as the war drags on for weeks, the humanitarian needs in Ukraine have grown more acute. In addition to the thousands killed, millions of people have been displaced, and there are increasing reports of people being tortured and raped. 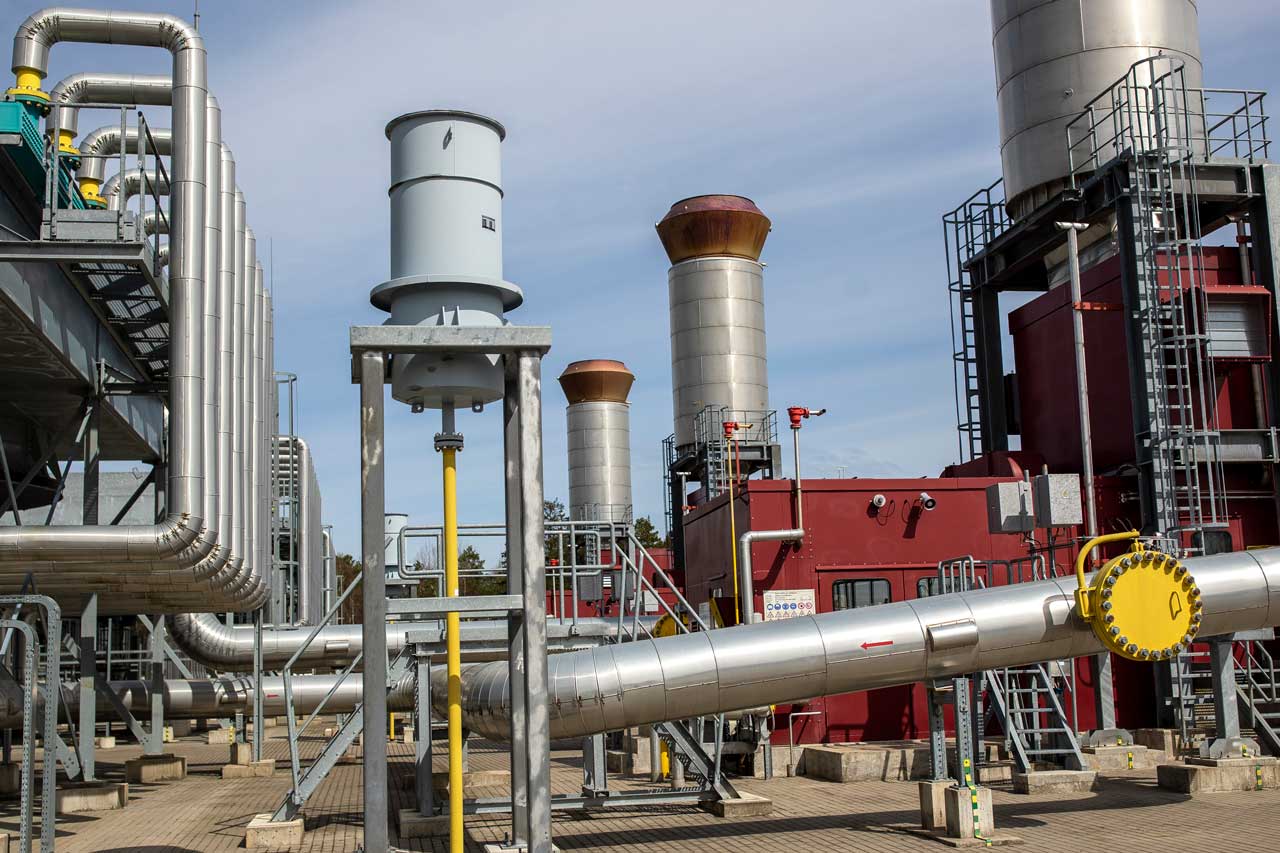 The Gas Interconnection Poland-Lithuania pipeline, which is 310 miles long, comes “at a time when Russia has once again tried to blackmail us using gas,” Polish President Andrzej Duda said at the inauguration.

Lithuania’s Prime Minister Ingridas Simonyte added that “any reduction or disappearance of this source of funding would have a very significant impact on the Russian economy and the ability to continue financing the war in Ukraine.”

The Lithuania-Poland leg is integrated with pipelines in the other two Baltic states — Estonia and Latvia — and Finland, and into the European Union gas transmission system. Before the pipeline was built, the four countries could only receive pipeline gas from Russia.