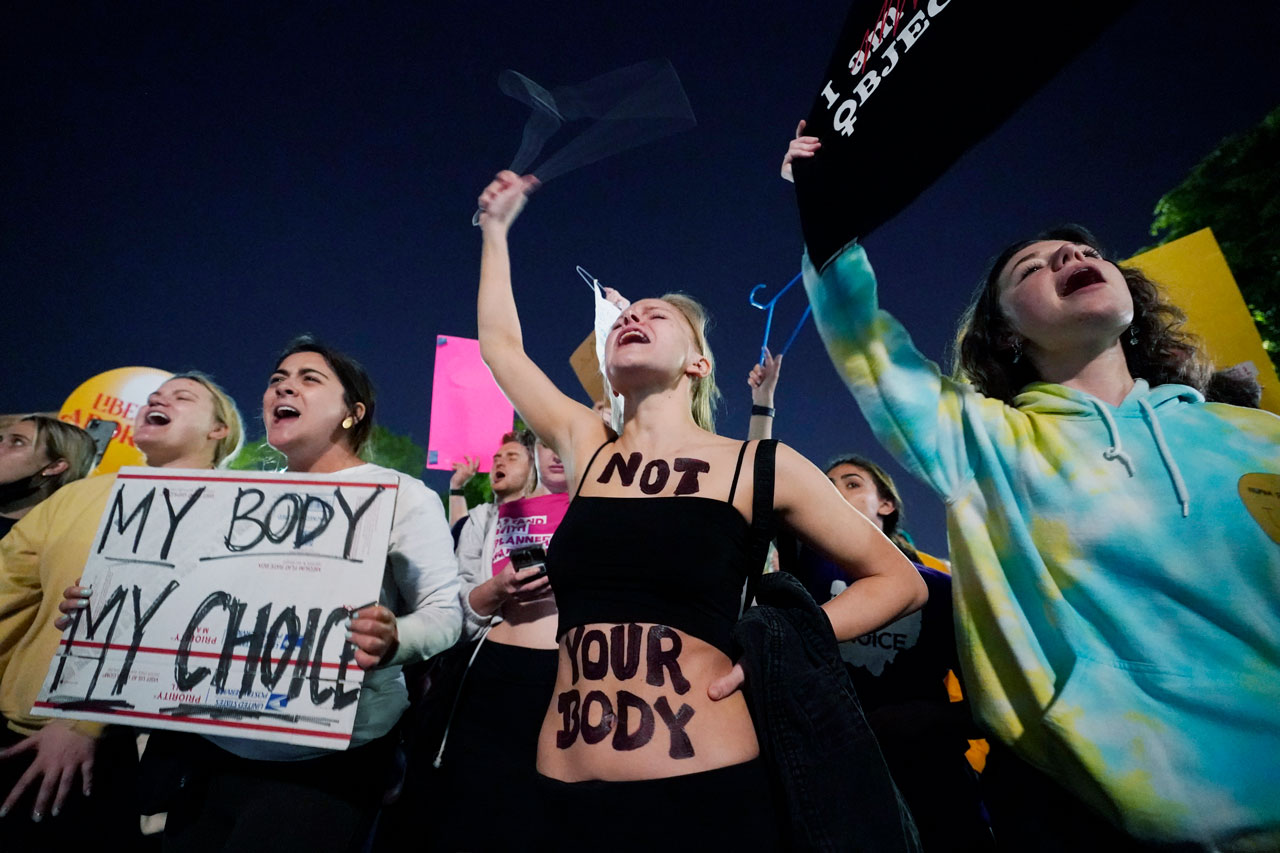 If the U.S. Supreme Court follows through on overturning the landmark 1973 Roe v. Wade case that legalized abortion nationwide, it would immediately split the country into states with abortion access and those that outlaw it.

Some states had already been preparing for the potential that the high court could weaken or overturn Roe, but the bombshell leak of the draft opinion appeared to accelerate that drive Tuesday, setting the country on course for an even more jumbled landscape of abortion rights even before the court actually issues its ruling.

Almost immediately after Politico released the draft Monday night, Republicans who had fostered a decades-long push to end abortion rights cheered the prospect while Democrats vowed to fight the possible overturning of a constitutional right that has been in place for nearly a half-century.

In California, Democrats who wield control of the state Legislature and the governor’s office issued a joint statement late Monday announcing they would seek to amend the state’s constitution to enshrine abortion rights.

“California will not stand idly by as women across America are stripped of their rights and the progress so many have fought for gets erased,” California Democrats said. “We know we can’t trust the Supreme Court to protect reproductive rights, so California will build a firewall around this right in our state constitution. Women will remain protected here.”

About half of U.S. states are already expected to ban abortion if Roe falls, according to the abortion-rights think tank Guttmacher Institute. Twenty-two states, largely in the South and Midwest, already have total or near-total bans on the books. Aside from Texas, all are now blocked in court because of Roe.

Thirteen states have so-called trigger laws, which would immediately ban abortion if Roe is overturned and would presumably go into effect if the Supreme Court majority votes for the draft in late June or early July.

One is Arkansas, where Republican Gov. Asa Hutchinson called the leak “reprehensible” and called for an investigation while backing the draft opinion. Alabama Gov. Kay Ivey said the leak was an “outrageous” attempt to manipulate the court and called for prayer that the justices would “remain steadfast.” In Texas, Attorney General Ken Paxton said he’d continue to “pray for the end of abortion access across our nation.”

If Roe Is Overturned, Missippippi’s Only Abortion Clinic Will Close

Mississippi would also automatically ban abortion and the owner of the state’s only clinic said she’d close if the draft opinion is adopted. “You put four people on the court who said they’re going to overturn Roe — that’s why they were put on. When you do that, I don’t know how you’re surprised when that’s going to happen,” said Diane Derzis.

A few states still have pre-Roe bans on the books, including Michigan, where Democratic Gov. Gretchen Whitmer has sued to remove it and pledged on Twitter Monday to “fight like hell to make sure abortion remains safe, legal, and accessible.”

Polling shows relatively few Americans want to see Roe overturned. In 2020, AP VoteCast found that 69% of voters in the presidential election said the Supreme Court should leave the Roe v. Wade decision as is; just 29% said the court should overturn the decision. In general, AP-NORC polling finds a majority of the public favors abortion being legal in most or all cases.

While pointing out that abortion is still a legal right now, Alexis McGill Johnson, president and CEO of Planned Parenthood Federation of America, said the draft is “horrifying and unprecedented.” The burden of losing access to abortion will fall most heavily on low-income women and people of color, advocates have said.

“Banning abortions does not stop abortions,” tweeted Democratic Kansas Rep. Christina Haswood, one of three Native American lawmakers there. “The poor and us colored folks will suffer. I’m furious.”

The Kansas Supreme Court in 2019 declared that the state constitution protects abortion rights, but Republican lawmakers placed on the August primary ballot an initiative to overturn it. 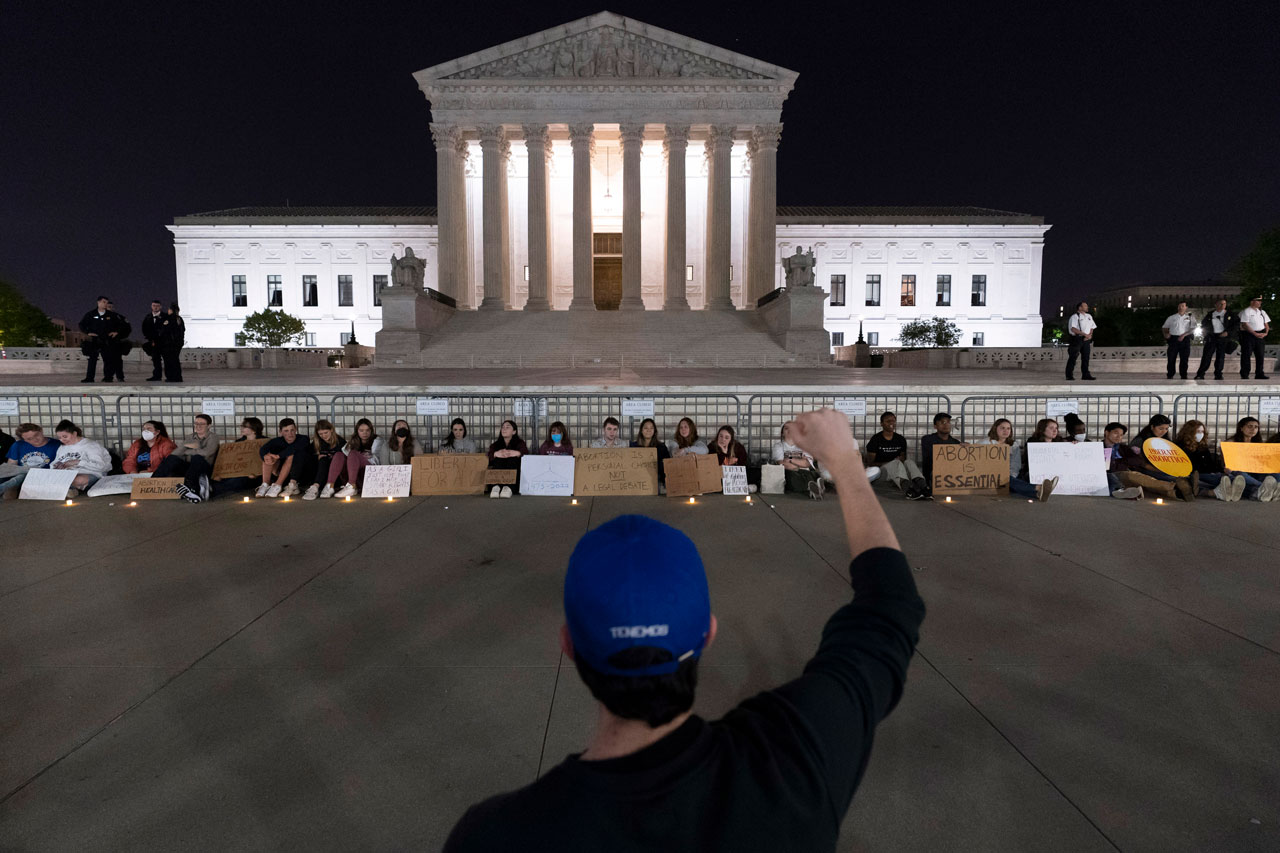 A crowd of people gathers outside the Supreme Court early Tuesday, May 3, 2022, in Washington. A draft opinion suggests the U.S. Supreme Court could be poised to overturn the landmark 1973 Roe v. Wade case that legalized abortion nationwide, according to a Politico report released Monday. Whatever the outcome, the Politico report represents an extremely rare breach of the court’s secretive deliberation process, and on a case of surpassing importance. (AP/Alex Brandon)

Eight GOP-led states have already passed new restrictions this year, expecting change from the conservative majority on the high court. Arizona and Florida banned the procedure after 15 weeks, without exceptions for rape or incest. Others, like Oklahoma, went further and made it a felony as of this summer to perform an abortion, with an exception only for the life of the mother.

Idaho followed Texas and allowed people to sue over abortions — including potential family members of the embryo.

“Decades of steadfast prayer and unwavering legislative efforts to protect the lives of the unborn are finally on the doorsteps of success,” Oklahoma House Speaker Charles McCall, a Republican, said Tuesday. “The seemingly imminent overturning of Roe v. Wade justifies the long battle by Oklahoma House Republicans and pro-life allies nationwide to return this matter to the duly elected representatives of state legislatures to decide.”

Sixteen states and the District of Columbia, meanwhile, have protected access to abortion in state law, and eight states moved to expand or strengthen those protections this year.

States like Washington and Connecticut, meanwhile, have protected abortion providers in their states from lawsuits.

The Democratic leaders in Connecticut’s statehouse, which over the weekend sent legislation to that state’s governor that would protect abortion providers, said in a joint statement Monday night they had feared a proposed decision like the one in the draft opinion and “now this nightmare appears to be all too real.”

Democratic New York Gov. Kathy Hochul said her state would “welcome with open arms” those who need access to abortion.

In Hawaii, state Sen. Roz Baker, a Democrat, questioned what more the ruling, if supported, could bring.

In some cases, abortion laws may divide states as well.

GOP-led Tennessee also has a trigger law banning abortion if Roe is overturned, but Nashville’s district attorney on Monday tweeted that he would not prosecute any doctor who performed an abortion.