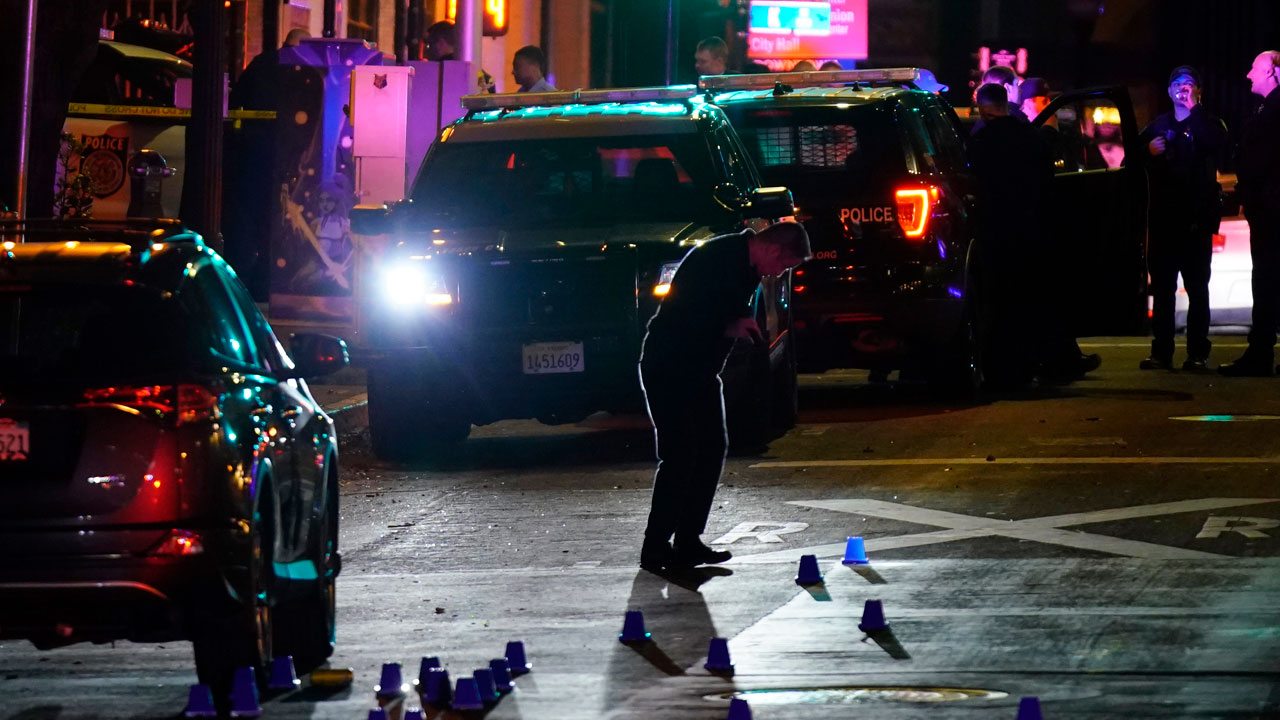 Investigators search for evidence in the area of a mass shooting In Sacramento, April 3, 2022. (AP/Rich Pedroncelli)
Share with friends

It’s an election year and crime has emerged as a major campaign issue, so it’s no wonder that the horrendous shootout between two gang factions in downtown Sacramento that left six people dead has led to much political fingerpointing.

Republicans, who have become virtually powerless in California, quickly pointed the finger of blame at Gov. Gavin Newsom because one of the alleged shooters, Smiley Martin, had served just five years of a 10-year prison term for spousal abuse due to the state’s recently loosened parole standards.

“In California, you can do the crime and skip the time. Criminals see little to no consequences for crime, and that needs to change,” said Senate Republican leader Scott Wilk. “If we are to restore order and safety to our communities, a good place to start is ensuring early release credits are not given to violent and dangerous felons for simply breathing.”

In response, Newsom’s office has said the state prison system was merely implementing authority to grant more generous “good time” credits to inmates that voters authorized when they passed Proposition 57 in 2016.

Prison authorities had adopted the new rules on an expedited basis without the chance for public input, but after a lawsuit was filed and a judge tentatively ruled against the process, they reversed themselves and allowed a period for comment.

The politician who should bear the onus for allowing the alleged shooter and other violent criminals to serve only portions of their sentences is former Gov. Jerry Brown, who wrote Proposition 57 and more or less tricked voters into believing that it would benefit only felons who committed non-violent crimes.

Brown’s stated aim was to undo some of the tough sentencing laws he signed during his first stint as governor nearly four decades earlier, saying they had not worked.

He closely guarded details of the “Public Safety and Rehabilitation Act of 2016” until just before submitting it as an amendment to a pending ballot measure dealing with juvenile justice, thereby virtually eliminating any chance for opponents to influence “title and summary” processing by the Department of Justice.

The measure, a constitutional amendment, declares that “any person convicted of a non-violent felony offense and sentenced to state prison shall be eligible for parole consideration after completing the full term for his or her primary offense” and made it easier for them to reduce the “full term” with more generous credits for good behavior.

However, it did not define or list “non-violent felony offenses.” Instead, Brown’s campaign referred to a section of the Penal Code that listed 23 particularly violent offenses, such as murder. Any crime not on the list would be considered non-violent for purposes of parole.

Indirectly, therefore, dozens of serious crimes would be considered non-violent for parole purposes. They include assault with a deadly weapon, soliciting murder, intimidating or harming a crime victim or witness, resisting arrest that injures a police officer, violent elder or child abuse, arson with injury, human trafficking, and several forms of manslaughter.

Ironically, as Proposition 57 was being debated, Kamala Harris, then the attorney general, released a report revealing that violent crime had increased by 10% in 2015 and she counted several crimes considered to be non-violent under Brown’s measure.

Nevertheless, Brown’s campaign for Proposition 57 continued to insist that only non-violent felons would benefit and voters passed the measure handily. Two years ago, voters also rejected a measure that would have added a number of obviously violent crimes to the 23 that Proposition 57 had specified.