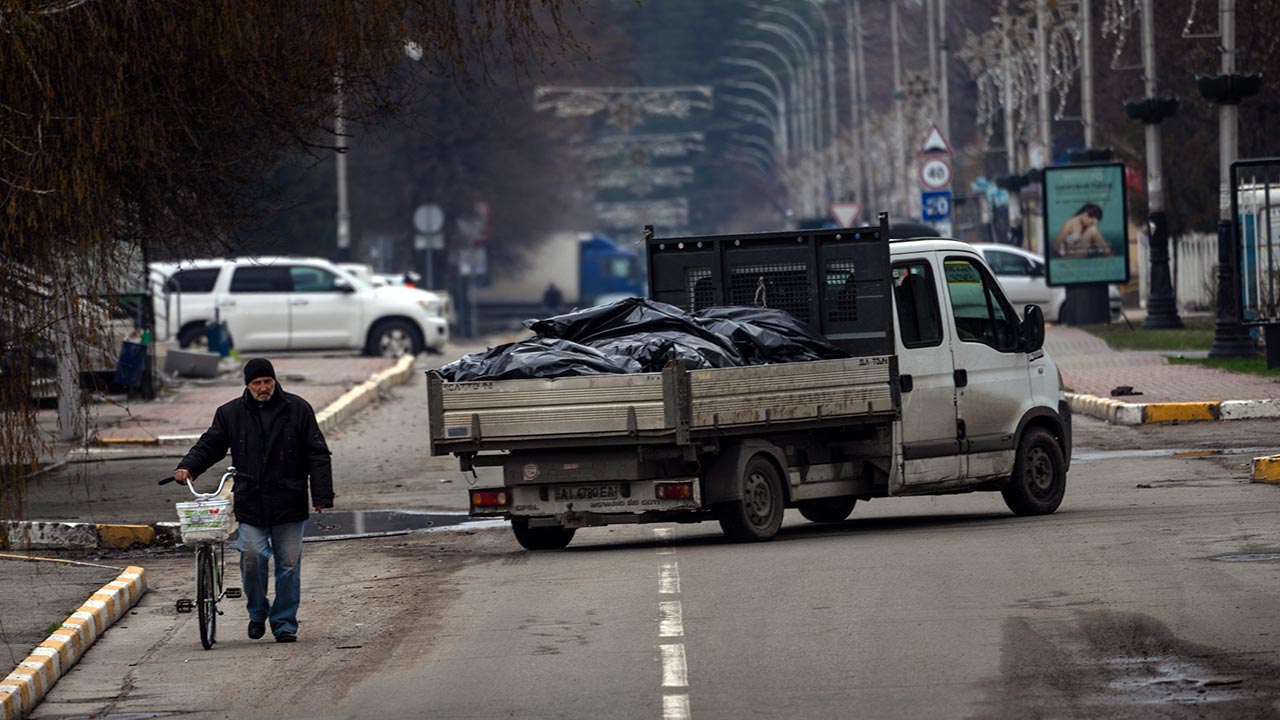 A man walks with a bicycle next to a truck carrying corpses exhumed from a mass grave in Bucha, Ukraine, Monday, April 11, 2022. (AP/Rodrigo Abd)
Share with friends

KYIV, Ukraine — The mayor of the Ukrainian port city of Mariupol said Monday that more than 10,000 civilians have died in the Russian siege of his city and that the death toll could surpass 20,000, with corpses that were “carpeted through the streets.”

Speaking by phone Monday to The Associated Press, Mayor Vadym Boychenko also said Russian forces brought mobile cremation equipment to the city to dispose of the bodies, and he accused Russian forces of refusing to allow humanitarian convoys into the city in an attempt to conceal the carnage.

The mayor’s comments emerged as Russia claimed that it destroyed several Ukrainian air-defense systems in what appeared to be a renewed push to gain air superiority and take out weapons Kyiv has described as crucial ahead of an expected broad new offensive in the east.

Related Story: Zakaria: Right-Wing Populists Are Thriving — Even When They’re Friends of ...

In one strike, Moscow said it hit four S-300 launchers near the central city of Dnipro that had been provided by a European country it did not name. Slovakia gave Ukraine just such a system last week but denied it had been destroyed. Russia previously reported two strikes on similar systems in other places.

Moscow’s initial invasion stalled on several fronts as it met stiff resistance from Ukrainian forces, who prevented the Russians from taking the capital and other cities. The failure to win full control of Ukraine’s skies has hampered Moscow’s ability to provide air cover for troops on the ground, limiting their advances and likely exposing them to greater losses.

With their offensive in many parts of the country thwarted, Russian forces have relied increasingly on bombarding cities — a strategy that has left many urban areas flattened and killed thousands of people. The war has also shattered Ukraine’s economy, with the World Bank estimating it will shrink by more than 45% this year.

Ukrainian authorities accuse Russian forces of committing atrocities, including a massacre in the town of Bucha, outside Kyiv, airstrikes on hospitals and a missile attack that killed at least 57 people last week at a train station.

Exhumation of Dead in Bucha Continues

In Bucha on Monday, the work of exhuming bodies from a mass grave in a churchyard resumed.

Galyna Feoktistova waited for hours in the cold and rain in hopes of identifying her 50-year-old son, who was shot and killed more than a month ago, but eventually she went home for some warmth. “He’s still there,” her surviving son, Andriy, said.

Meanwhile, the U.N. children’s agency said that nearly two-thirds of all Ukrainian children have fled their homes in the six weeks since Russia’s invasion began, and the United Nations has verified that 142 children have been killed and 229 injured, though the actual numbers are likely much higher.

In a statement released by his office, Nehammer said his primary message to Putin was “that this war needs to end, because in war both sides can only lose.” Nehammer said he also raised the issue of war crimes committed by the Russian military and said those responsible “will be held to account.”

Austria is a member of the European Union and has backed the 27-nation bloc’s sanctions against Russia, though it so far has opposed cutting off deliveries of Russian gas. The country is militarily neutral and is not a member of NATO. 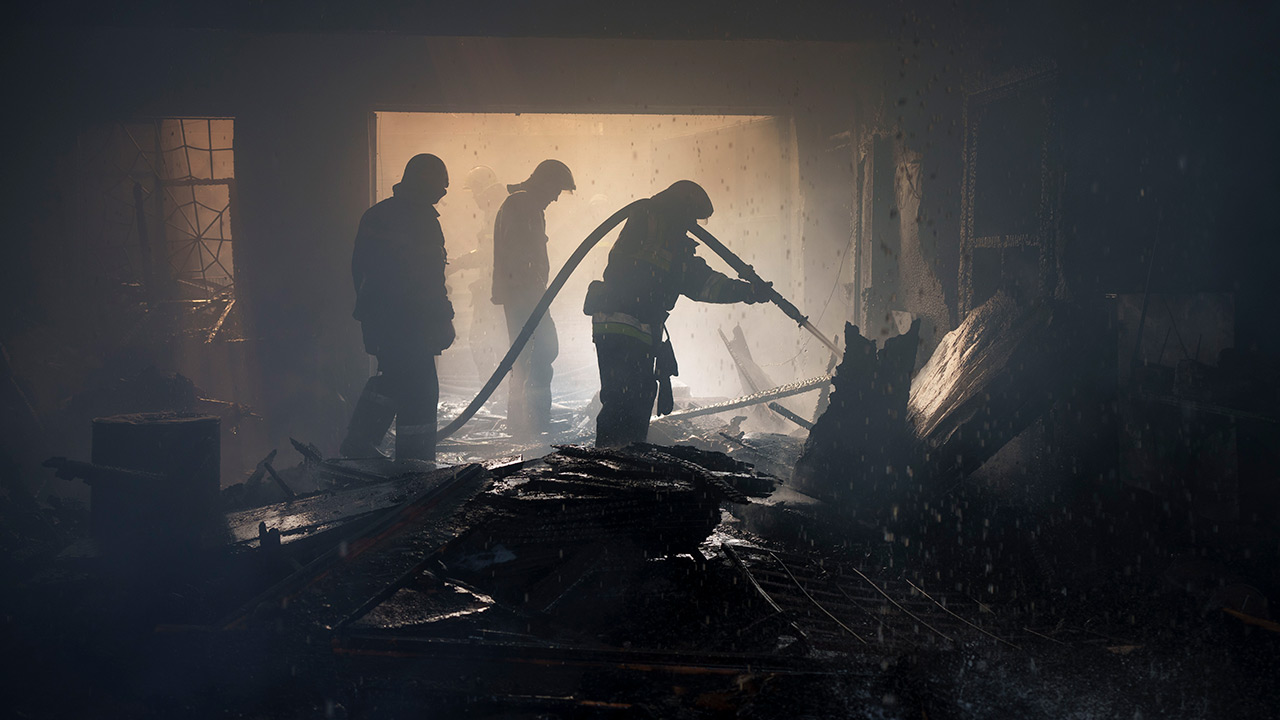 Firefighters work to extinguish a fire at a house after a Russian attack in Kharkiv, Ukraine, Monday, April 11, 2022. (AP/Felipe Dana)

In other developments, the head of the separatist rebel government in Donetsk said Ukrainian forces have lost control of the port area of Mariupol.

“Regarding the port of Mariupol, it is now under our control,” Denis Pushilin, president of the Donetsk People’s Republic, told Russian state television, according to Russian news agencies. The claim could not immediately be confirmed.

Russia has appointed a seasoned general to lead its renewed push in the eastern Donbas region, where Moscow-backed separatists have been battling Ukrainian forces since 2014 and have declared independent states. Both sides are digging in for what could be a devastating war of attrition.

Ukrainian President Volodymyr Zelenskyy pleaded for more Western aid, saying his forces need heavier firepower to resist the coming onslaught and push Russian forces back. Echoing his remarks in an AP interview, Zelenskyy said Sunday that the coming week could be crucial and that Western support — or the lack thereof — may prove decisive.

“To be honest, whether we will be able to (survive) depends on this,” Zelenskyy said in a “60 Minutes” interview. “Unfortunately, I don’t have the confidence that we will be receiving everything we need.” In a video address to South Korean lawmakers on Monday, he specifically requested equipment that can shoot down Russian missiles.

But those armaments could increasingly come under attack as Russia looks to shift the balance in the 6-week-old war.

Russian Defense Ministry spokesman Maj. Gen. Igor Konashenkov said the military used cruise missiles to destroy the four launchers Sunday on the southern outskirts of Dnipro. He said the military also hit such systems in the Mykolaiv and Kharkiv regions.

The Russian claims could not be independently verified.

The Pentagon said it had seen no evidence to support Russia’s claims. A senior U.S. defense official said Russia did conduct an airstrike Sunday on the airport in Dnipro, destroying some equipment, but the official said the U.S. has seen no indication that an air-defense system was knocked out.

Lubica Janikova, spokeswoman for Slovakia’s prime minister, denied Monday that the S-300 system it sent Ukraine had been destroyed. She said any other claim is not true.

Ukraine has specifically asked for more S-300s in recent months, though it already had a number of the Soviet-built systems and other long-range air-defense systems. It also has received batches of portable, shoulder-fired Western anti-aircraft weapons like Stingers, which are efficient against low-flying aircraft.

Questions remain about the ability of depleted and demoralized Russian forces to conquer much ground after their advance on Kyiv was repelled by determined Ukrainian defenders.

Britain’s Defense Ministry said Monday that Ukraine has already beaten back several assaults by Russian forces in the eastern Donetsk and Luhansk regions — which make up the Donbas — resulting in the destruction of Russian tanks, vehicles, and artillery. 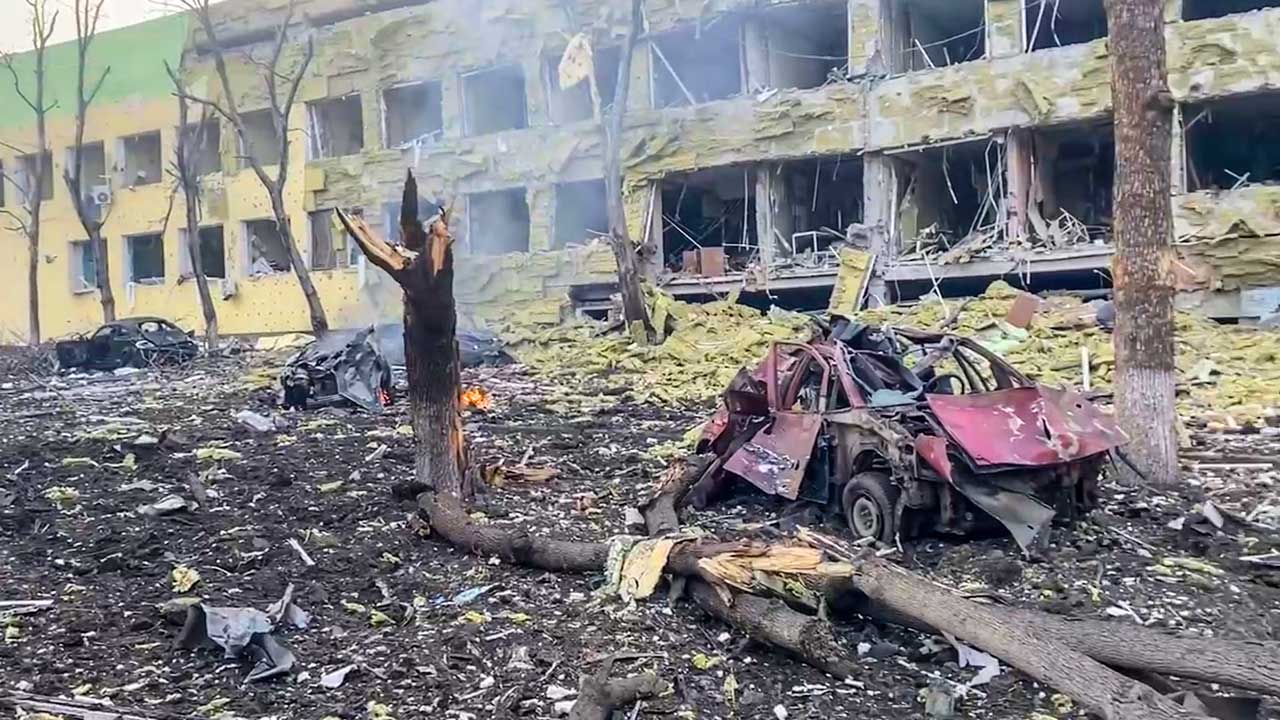 This image taken from video provided by the Mariupol City Council shows the aftermath of Mariupol Hospital after an attack, in Mariupol, Ukraine, Wednesday, March 9, 2022. A Russian attack severely damaged the children’s hospital and maternity ward in the besieged port city of Mariupol, Ukrainian officials said. (Via AP)

Russian Assault Focuses on Area Between Kharkiv and Kherson

Western military analysts say Russia’s assault increasingly is focusing on an arc of territory stretching from Kharkiv, Ukraine’s second-largest city, in the north, to Kherson in the south.

On Sunday, Russian forces shelled government-controlled Kharkiv and sent reinforcements toward Izyum to the southeast to try to break Ukraine’s defenses, the Ukrainian military said.

A residential area in Kharkiv was struck by incoming fire on Monday afternoon. Associated Press journalists saw firefighters putting out the fire and checking for victims following the attack, and saw that at least five people were killed, including a child.

Oleh Synyehubov, the regional governor of Kharkiv, said earlier Monday that Russian shelling had killed 11 people over the last 24 hours.

In Mariupol, Russia deployed Chechen fighters, reputed to be particularly fierce. Capturing the city on the Sea of Azov would give Russia a land bridge to the Crimean Peninsula, which Russia seized from Ukraine and annexed eight years ago.

Vladislav Usovich, an 18-year-old conscript serving in Russia-backed separatist forces, advanced slowly with other fighters through residential areas around a factory Sunday in Mariupol.