$200 Million Is Flowing to the Valley to Fix Sinking Canals 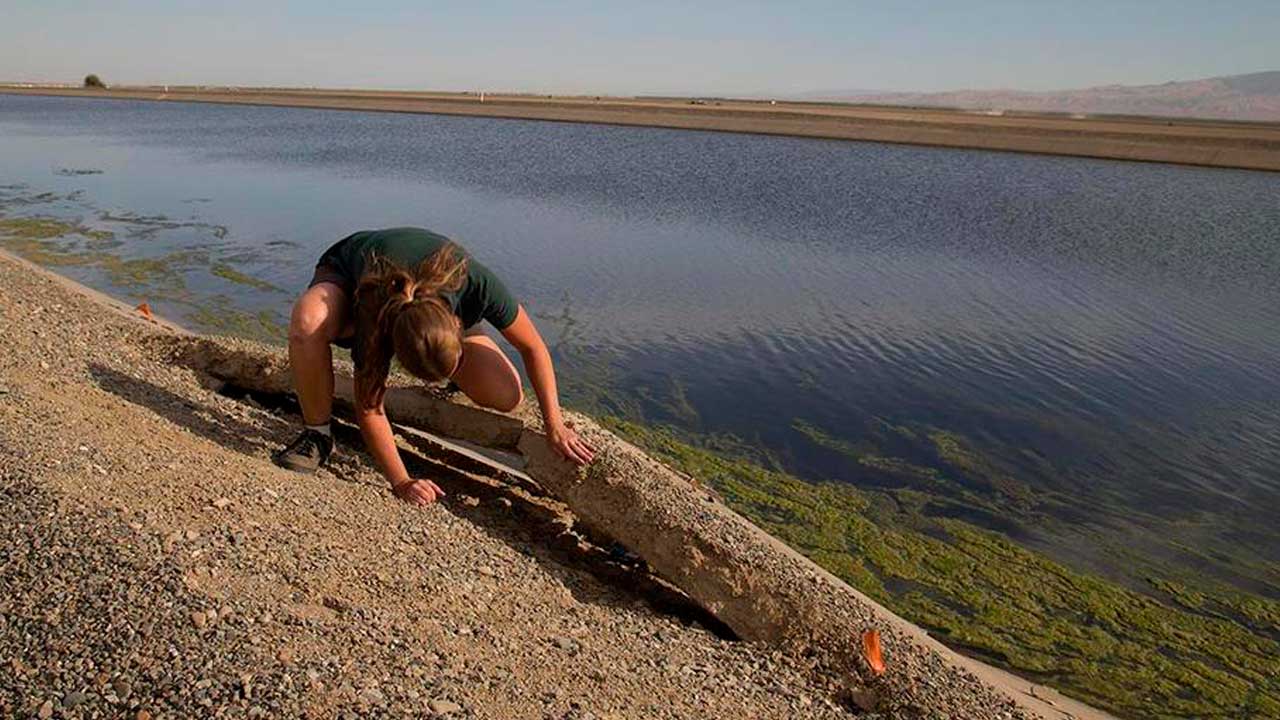 Subsidence is examined on the Delta-Mendota Canal, which is sinking because of drought and aquifer overdraft. (USGS/Claudia Faunt)
Share with friends

The first releases from a two-year, $200 million state initiative are flowing to the San Joaquin Valley to repair sinking leaky canals.

The 116-mile Delta-Mendota Canal, which has been damaged by land subsidence, will receive $3.3 million for fixes from the state Department of Water Resources.

“Investing in water infrastructure and restoring key water conveyance systems to protect California’s water supply is crucial to climate resiliency,” said DWR Director Karla Nemeth in a news release Thursday. “With California in a third year of drought, this local, federal, and state collaboration is an important step to improving California’s water system.”

The Delta-Mendota Canal is one of four projects that will receive funding from the state’s intensified effort to improve water conveyance in the Valley.

DWR is also working on agreements for projects on the San Luis Canal and the California Aqueduct. And, it recently announced the release of $29.8 million to fix segments of the sinking Friant-Kern Canal.

“This is the first of many steps to help California modernize and repair our water infrastructure,” said state Sen. Melissa Hurtado (D-Bakersfield). “As California’s climate changes, we must find ways to adapt—and fixing our broken canals is one such way towards resiliency. Another way is modernizing California’s water management, which is why I have decided to move forward with SB 1219, which will ensure we move our water planning into the 21st century and prepare for our water future.”

The state’s plan calls for $100 million to be distributed this year and $100 million next year. Agencies receiving state help for these repairs must supply additional funding from other sources and devise ways to avoid future subsidence, according to DWR.

The Delta-Mendota Canal, which carries water from its headworks in Byron to its outlet in Mendota, helps deliver water to 1.2 million acres of farmland in the San Joaquin, San Benito, and Santa Clara valleys. It also carries water to more than two million Californians and approximately 150,000 acres of managed wetlands important to the Pacific Flyway.

“This initial funding award is a positive step forward to begin to mitigate the impacts of subsidence on the Delta-Mendota Canal,” said Federico Barajas, executive director of the San Luis and Delta-Mendota Water Authority.

“We appreciate the leadership and commitment demonstrated by the Newsom Administration, our Congressional and California Legislative delegations, and the Authority member agencies, to advance this project to increase water resilience to the communities and ecosystems served by the water delivered through the Delta-Mendota Canal.”

Drought and extensive groundwater pumping have caused canals to sink and leak, resulting in the need for expensive repairs.

For example, fixes for the 152-mile Friant-Kern Canal, which stretches from Millerton Lake to Kern Kern County, are estimated at $250 million to $500 million.

Turkey to Move Trial of Khashoggi Suspects to Saudi Arabia