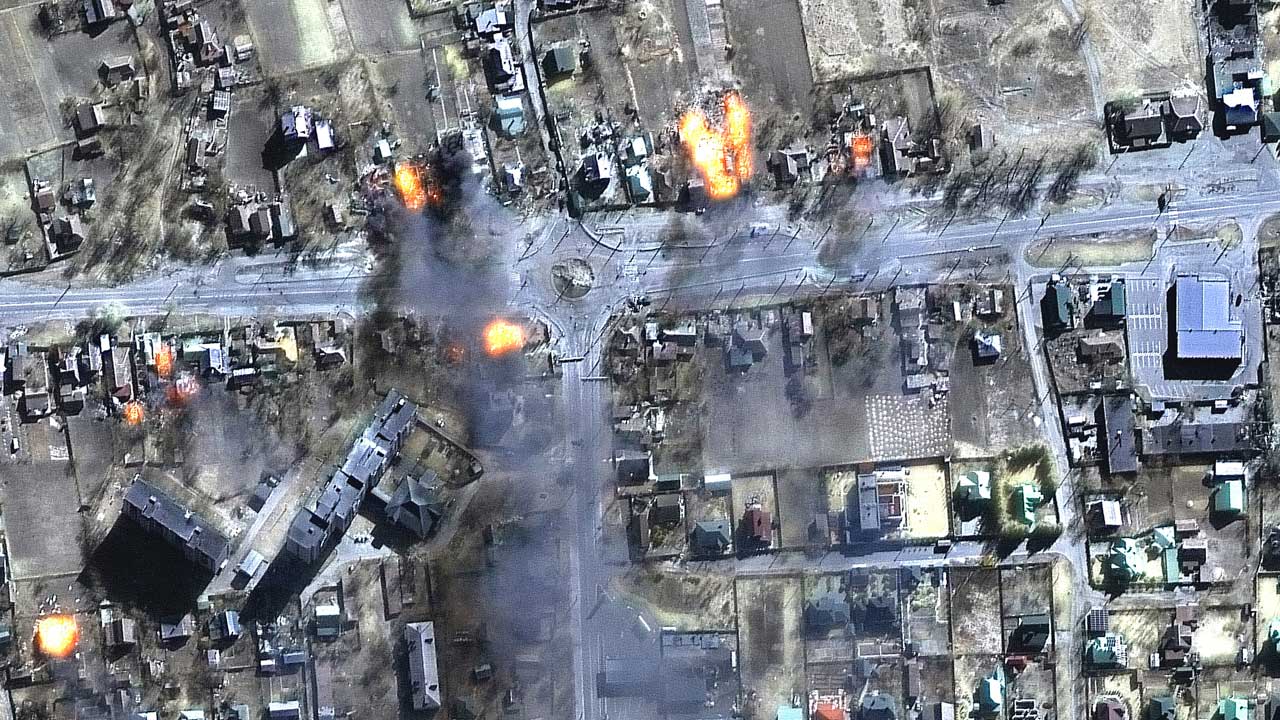 KYIV, Ukraine — Rescuers searched for survivors Thursday in the ruins of a theater blown apart by a Russian airstrike in the besieged city of Mariupol, while a ferocious bombardment left dozens dead in a northern city over the past day, authorities said.

Hundreds of civilians had been taking shelter in the grand, columned theater in central Mariupol after their homes were destroyed in three weeks of fighting in the southern port city.

Nearly a day after the airstrike, there were no reports of deaths. With much of the city cut off from the flow of information, there were also conflicting reports on whether anyone had emerged from the rubble.

“We hope and we think that some people who stayed in the shelter under the theater could survive,” Petro Andrushchenko, an official with the mayor’s office, told The Associated Press. He said the building had a relatively modern basement bomb shelter designed to withstand airstrikes.

Other officials had said earlier that some people had gotten out. Ukraine’s ombudswoman, Ludmyla Denisova, said on the Telegram messaging app that the shelter had held up.

Satellite imagery on Monday from Maxar technology showed huge white letters on the pavement in front of and behind the theater spelling out “CHILDREN” in Russian — “DETI” — to alert warplanes that children were inside.

Russia’s military denied bombing the theater or anyplace else in Mariupol on Wednesday.

The strike against the theater was part of a furious bombardment of civilian sites in multiple cities over the past few days.

In the northern city of Chernihiv, at least 53 people had been brought to morgues over the past 24 hours, killed amid heavy Russian air attacks and ground fire, the local governor, Viacheslav Chaus, told Ukrainian TV on Thursday.

Ukraine’s emergency services said a mother, father, and three of their children, including 3-year-old twins, were killed when a Chernihiv hostel was shelled.

Civilians were hiding in basements and shelters across the embattled city of 280,000,

“The city has never known such nightmarish, colossal losses and destruction,” Chaus said.

At least 21 people were killed when Russian artillery destroyed a school and a community center before dawn in Merefa, near the northeast city of Kharkiv, according to Mayor Veniamin Sitov. The region has seen heavy bombardment in a bid by stalled Russian forces to advance. 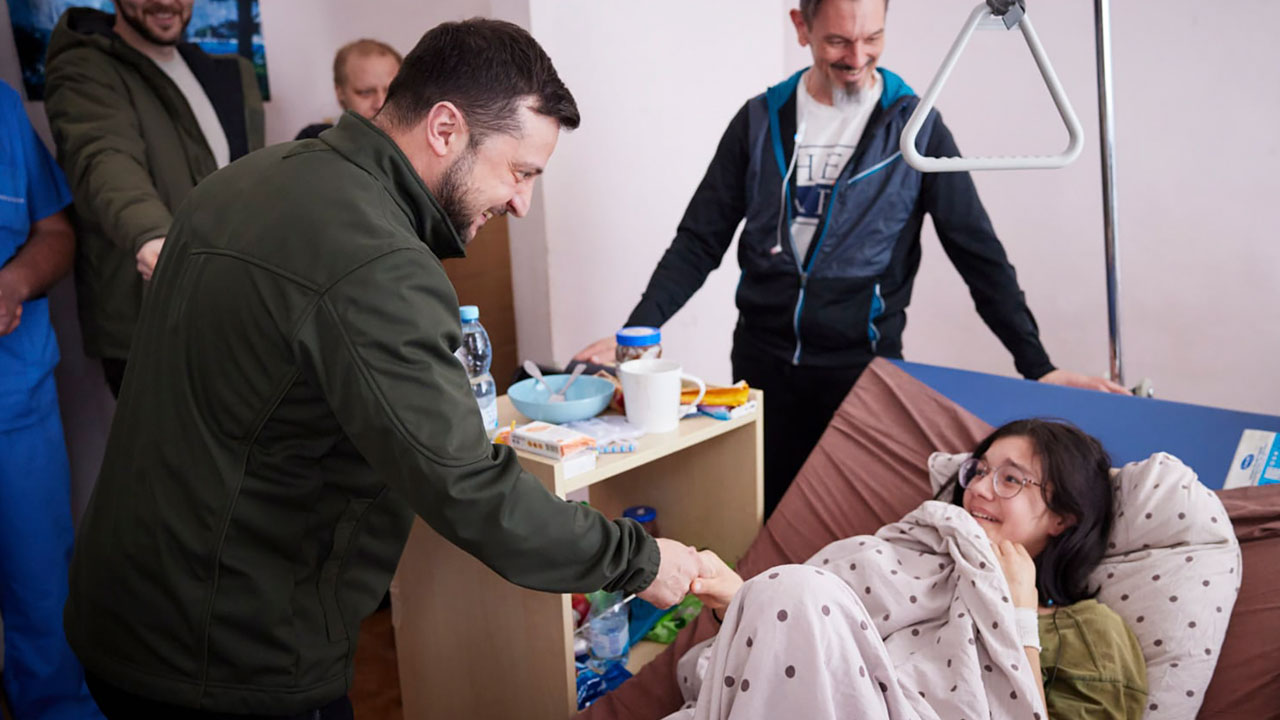 President Volodymyr Zelenskyy, shakes hands with a wounded Kateryna Vlasenko, 16, a refugee from Vorzel who covered her younger brother with her body during Russian shelling, in a Kyiv hospital on Thursday, March 17, 2022, (Ukrainian Presidential Press Office via AP)

How to Get the Latest Ukraine News

Go to this link for continually updated news on the war in Ukraine.

“Putin’s brutality and what his troops are doing in Ukraine is just inhumane,” Biden said.

The meeting on St. Patrick’s Day was supposed to be held in person in the Oval Office, but it occurred virtually because Martin tested positive for COVID-19 on Wednesday evening. The positive result forced him to leave early from a gala where he had already interacted with Biden and House Speaker Nancy Pelosi.

During their conversation, Martin thanked Biden for “your capacity to marshal like-minded democracies,” which he said are “coming together to respond in an unprecedented way.”

Related Story: Why the World’s Biggest Democracy Is Silent on Russia’s Invasion of Ukraine

HELSINKI — Estonia’s defense ministry says the United States has earmarked $180 million in military assistance to the Baltic NATO members of Estonia, Latvia, and Lithuania this year under a scheme entitled the Baltic Security Initiative.

The ministry said on Thursday that a budget package approved by the U.S. Congress represents an increase of more than $10 million from last year in security assistance to the three former Soviet republics which all border Russia and have assisted Ukraine with arms and material help after the start of Moscow’s invasion.

“The United States has demonstrated clear initiative in the current security crisis, both in supporting its NATO Allies in the East, as well as Ukraine, and in bringing the actions of Russia to the attention of the international community,” Estonian Defense Minister Kalle Laanet said.

Last week, U.S. Secretary of State Antony Blinken visited the region and assured the three Baltic states of NATO protection and American support as they are increasingly on edge as Russia presses ahead with its invasion of Ukraine. 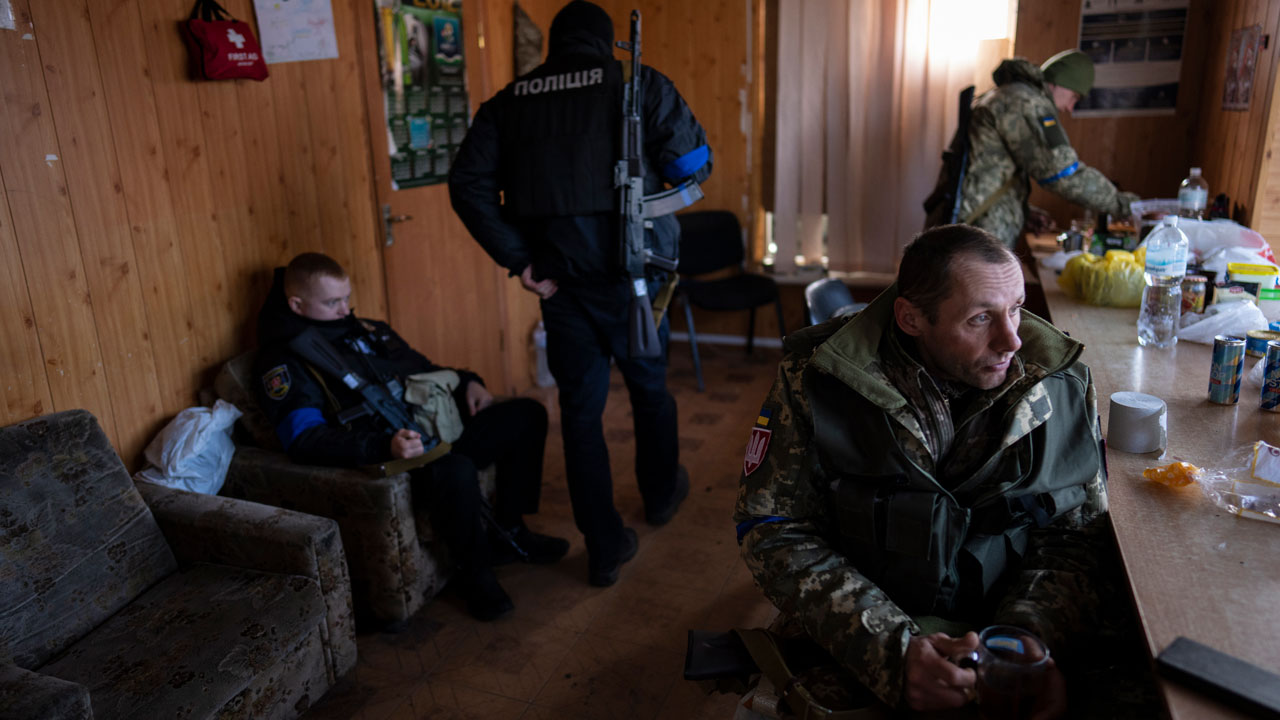 A soldier drinks tea during a break at a military check point, in Lityn, Ukraine, Wednesday, March 16, 2022. (AP/Rodrigo Abd)

Hayashi praised ambassadors from Hungary, Czechoslovakia, Poland and Slovakia for their countries’ support for Ukrainian refugees, and pledged to provide $100 million in humanitarian aid. He repeated Japan’s condemnation against Russian invasion as a serious violation to international law and promised to impose tough sanctions against Moscow.

Visegrad Group, launched in 1991 as a regional framework, is increasingly cooperating with Japan as “V4 plus Japan” through meetings of leaders, foreign ministers and working level dialogue, according to the foreign ministry.

MEREFA, Ukraine — Twenty-one people have been killed by Russian artillery that destroyed a school and a community center in Merefa, near the northeast city of Kharkiv, officials said.

The Kharkiv region has seen heavy bombardment as stalled Russian forces try to advance in the area. 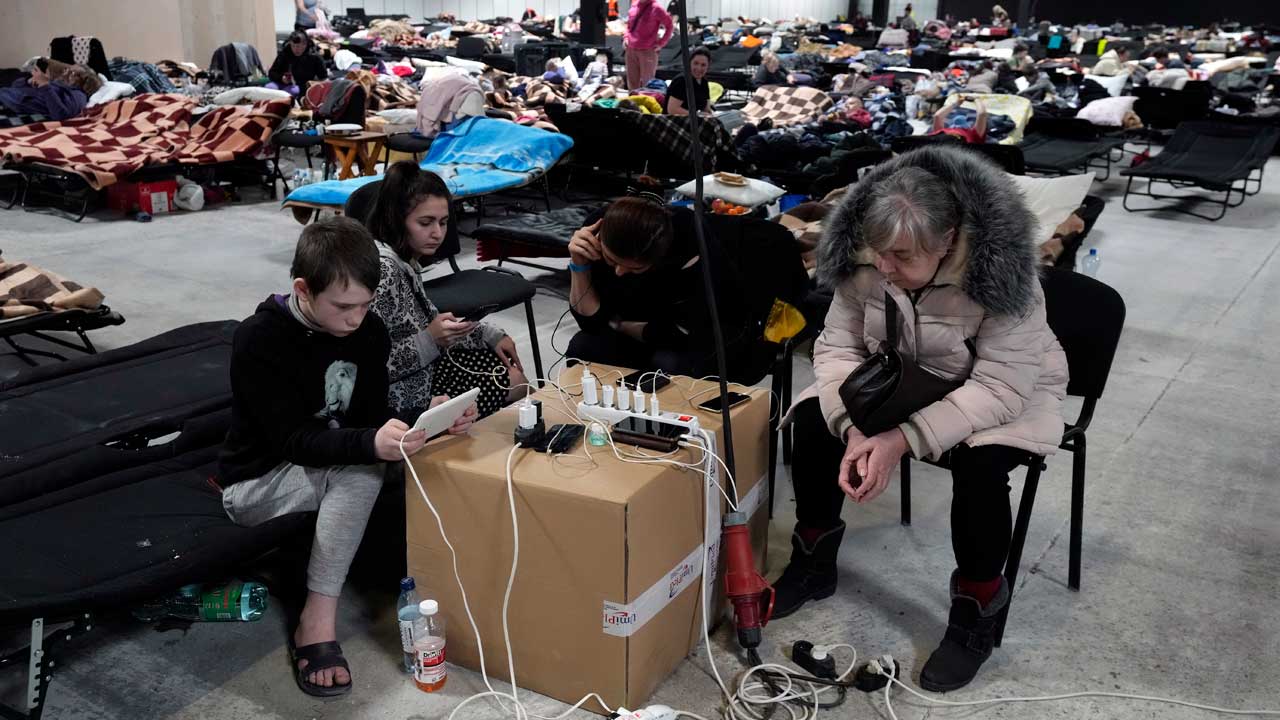 The address Sunday is part of his drive to rally popular and official support for Ukraine against Russia’s three-week invasion.

Tel Aviv Mayor Ron Huldai tweeted that he offered to link the speech to Habima Square in the heart of Tel Aviv “so that the entire public can listen to the president’s words live.”

Israel’s ties with both Russia and Ukraine run deep. Israeli Prime Minister Naftali Bennett has managed to leverage Israel’s good relations with both countries and his personal rapport with their leaders to turn himself into an unexpected mediator, one of the few world leaders to speak regularly to both sides.

And Zelenskyy, who is Jewish and has tailored his speeches to various audiences, appears to have an affinity for Israel. More than 1 million Jews from the region have moved to Israel since the collapse of the Soviet Union three decades ago. The Israeli and Russian militaries have maintained close communications in recent years to prevent clashes in the sky over Syria.

During a visit to the Polish capital, Defense Secretary Ben Wallace said the United Kingdom is sending the Sky Sabre medium-range anti-air missile system to Poland with about 100 personnel. He said the move is “to make sure that we stand alongside Poland in protecting her airspace from any further aggression from Russia.”

The decision comes days after Russian missiles struck a military base in Yavoriv, Ukraine, just a few miles from the border with Poland.

The British promise of military support also comes as nearly 2 million of the more than 3 million refugees to flee Ukraine have arrived in Poland.

“As a NATO ally and a very old ally, it is very right that Britain stands by Poland as Poland carries much of the burden of the consequence of this war and stands tall and brave to stand up to the threats from Russia,” Wallace said.

Parent Café Is a Life-Saver for Stressed Fresno Families