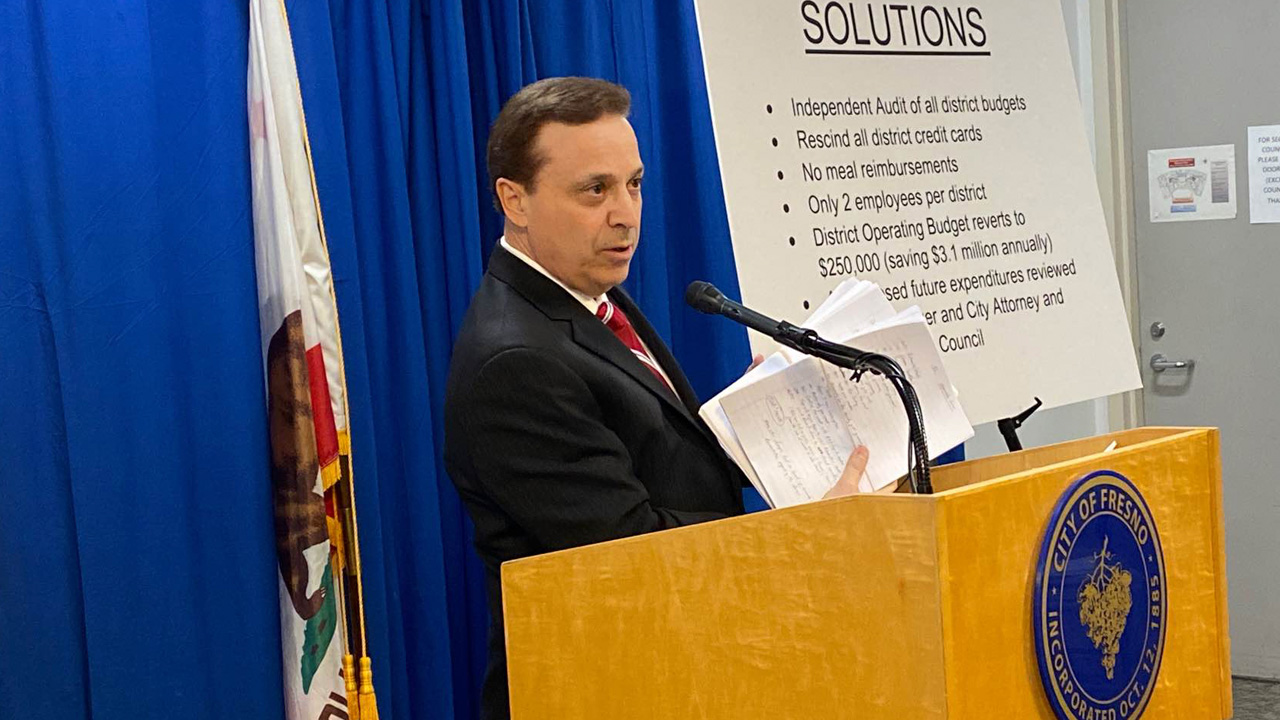 Some of it is going to pay for questionable items that might surprise city residents, says Fresno City Councilmember Garry Bredefeld.

Bredefeld blasted four of his fellow councilmembers for wasteful spending from “slush funds” at a news conference at City Hall on Thursday. Many thousands of taxpayer dollars have been spent without documentation such as receipts, he alleged.

“It’s not a pretty picture,” Bredefeld said. “I think what they’re doing is outrageous.”

He focused on four members — Miguel Arias, Nelson Esparza, Tyler Maxwell, and Esmeralda Soria. Bredefeld and the other four have been at political odds on several issues debated in council chambers.

Asked if he scrutinized the spending of councilmembers Mike Karbassi and Luis Chavez, Bredefeld said that he did. But, said Bredefeld, he wasn’t highlighting their expenditures because “they weren’t as egregious.”

Esparza and Maxwell, the council president and vice president respectively, dismissed Bredefeld’s accusations both in a joint news release and in separate interviews with GV Wire.

“What we have here is the opinion of one council member, one irrelevant council member and a fundamental difference in values,” Esparza said.

Both councilmen say spending money on food and equipment for events is justifiable reinvestment in the community. They rejected Bredefeld’s assertion that such funds should come from out-of-pocket or campaign accounts.

“We are utilizing city resources. When we are campaigning in an election, we are utilizing campaign resources and there is a very clear line there that I do not think is appropriate that be crossed,” Esparza said.

Maxwell said giveaways at community events are for those in need.

“I find it extremely disingenuous and ironic that the councilmember criticizing me for purchasing a few bicycles for little girls in my district to get to school safely is the same councilmember that has spent over $200,000 taxpayer dollars on employing a domestic violence felon in his office for two years,” Maxwell said, referring to former Bredefeld staffer Daniel Gai — who was arrested and convicted for domestic violence and eventually fired.

One of the items singled out for criticism by Bredefeld: Maxwell spent $60.94 at Spencer’s for an “ugly Christmas sweater.” 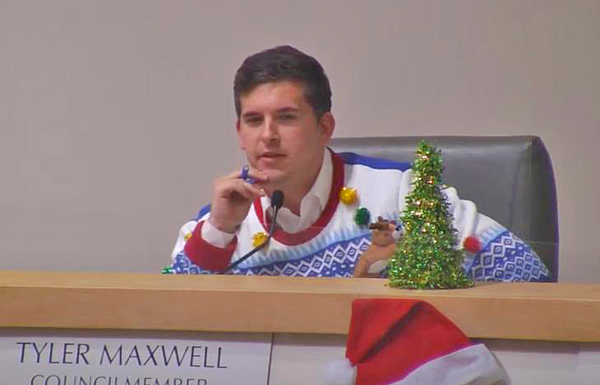 Councilman Tyler Maxwell wears an “ugly sweater” during the Dec. 9, 2021 Fresno City Council meeting, the same day he invoiced for the item.

Each Councilmember Gets $700,000 District Budget

The budget passed by the council last year allots $700,000 in carte blanche spending per councilmember — with an additional $60,000 for the council president, currently Esparza. Each councilmember also receives $500,000 for district infrastructure projects such as sidewalks and street repairs.

These two accounts are separate from the $5,000 annual stipend each councilmember receives for meals and mileage. Councilmembers are paid $80,000 a year, with the council president receiving $85,000.

Several items in the financial documents provided by Bredefeld show the power of incumbency. All of those banners, snacks, and booths that councilmembers display at community events are from district funds. Mailers, magnets, and brochures — from designing to printing — are also paid for from these accounts.

“(The spending is) the power of dishonest and unethical incumbents using taxpayer money as district slush funds for their own personal and political gain, and to promote themselves often attempting to buy votes through festivals and events they put together,” Bredefeld said. 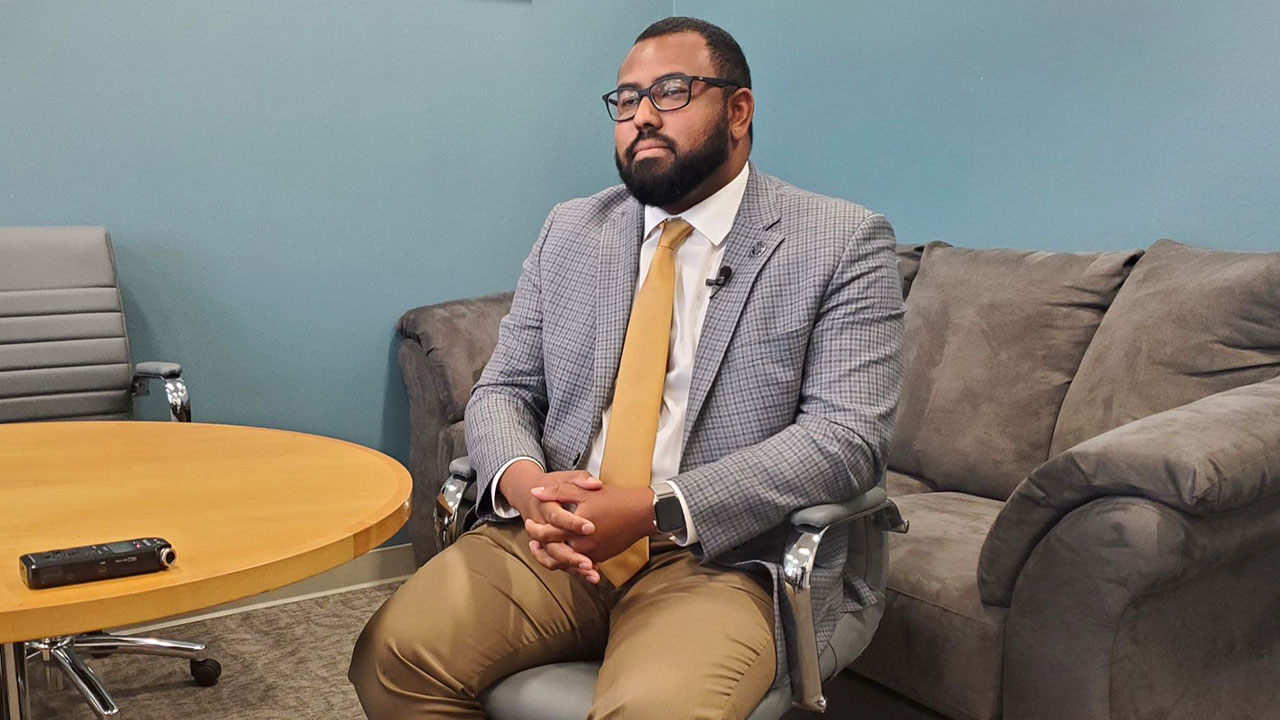 Among his solutions, Bredefeld wants to hire a forensic auditor to go through the city council spending accounts. He plans to introduce his motion at the March 24 city council meeting.

“The City Manager and I will be discussing the appropriate level of review to include an independent external audit. This is to ensure that expenditures by all City of Fresno credit cardholders comply with current policies and to identify best practices,” Dyer said in an email statement.

“Councilman Bredefeld is … not an effective municipal legislator and (it is) unlikely that we would take his suggestions too seriously. But you know, again, if we as a council then identified an issue, then that’s a conversation we probably would have,” Esparza said.

Esparza continued to criticize Bredefeld’s methods, saying that is one reason he removed him from the council finance and audit committee.

“If I thought it was warranted, absolutely. I think this is disingenuous,” Maxwell said.

Bredefeld’s other suggestions to eliminate what he called “waste, fraud, and abuse,” include rescinding district credit cards.

He also wants each councilmember to be limited to two aides and for the district operating budgets slashed from $700,000 to $250,000 — an annual savings of $3.1 million.

In addition, he would like all future district expenditures reviewed by the city manager and city attorney before being brought before the council.

“I think the mayor can do a lot of good by calling attention to this,” Bredefeld said. “He has a big megaphone.”

Bredefeld noted that members of the Fresno County Board of Supervisors are subject to tight controls on discretionary district funds.

He also said that councilmembers should be using privately raised campaign funds for donations to nonprofits instead of taxpayer funds.

Financial documents show councilmembers spent their district funds throughout the community. From COVID mask distributions to Beat the Heat parties, councilmembers put funds back into their neighborhoods.

Many thousands of dollars were spent at local restaurants. And the charges were not unique to any one councilmember. Only Bredefeld appeared not to spend his funds on food.

Esparza said it is OK to feed his staff with public funds.

“Our staff works really around the clock. If they’re working, we’re making them work, they’re going to be fed,” Esparza said.

Examining the documents provided, Soria spent $991 for meals at Max’s Bistro, one of Fresno’s finer dining establishments. Bredefeld said it was for a staff appreciation lunch.

Mike Karbassi, representing northwest Fresno, was not on Bredefeld’s target list. But, his spending ledger shows $1,000 spent at Mariscos El Patron in 2021 and more than $2,200 in a three-year span at Mediterranean Grill. Karbassi also has several charges with Uber Eats.

In an email to GV Wire, Karbassi said the Uber Eats charges were accrued in the early stages of the pandemic. He said he may have been exposed to COVID at City Hall, and staying at home was not an option because his elderly father lived with him.

Esparza spent nearly $2,300 for catering his reception held at City Hall by invitation only after he assumed the council presidency. He called it a legitimate expense.

Bredefeld accused the four councilmembers of wasting public money on catering at Grizzlies games. As part of the team’s lease of city-owned Chukchansi Park, the city has rights to a luxury box. Each councilmember (and members of the public) can request use of the box, but food is not included.

Esparza says most of his nights are used by nonprofits, especially those that serve children.

“We will on occasion cover the catering for those groups,” Esparza said.

Maxwell says he might be entertaining business owners who are considering coming to Fresno.

“We host different out-of-town folks, to show them this is Fresno. This is what we have to offer you … trying to sell the idea of Fresno to a lot of folks that might not be familiar with the city. And sometimes we do that by showing off some of our major assets, including the Grizzly stadium,” Maxwell said.

Bredefeld used his 45-minute news conference to also attack Maxwell for producing a slick, 16-page brochure for constituents. Costs are estimated at around $10,000.

By having his staff deliver them personally to constituents, Maxwell was breaking mass mailing laws, Bredefeld said.

Maxwell said Bredefeld calling him out is “ironic and disingenuous.”

“There are certain things you can and can’t do, obviously when you’re communicating with your district. I wanted to be very sensitive of that, and I’ve worked from very early on with our city attorney’s office to make sure that we were never in any violation of any city code or policies along the way,” Maxwell said.

Maxwell said there is a limit of how many they can hand-deliver per month. They can also be distributed at community events.

Money for Charities and Events

Councilmembers gave generously to local nonprofits and sponsored their events.

The Fresno Police Chaplaincy has appeared often on council spending ledgers, with donations ranging from $500 to $1,000.

Soria and Arias, who share representation of the Tower District, funded several events in the area including beatification events and the Gay Pride parade.

Documents show that Arias paid for at least two parking tickets in 2019 at $36.95 each from his district funds. Of that amount, $3.95 was to use a credit card. The parking office is just two floors above the city council offices.

Arias declined to comment. Soria did not return a text.

Esparza said he needs more staff to reach the community, especially now that his District 7 has more constituents after redistricting. A recent example of 70 people attending a community meeting is a successful result, Esparza said.

“I won’t apologize for doing all that outreach,” Esparza said.

Financial records show that Arias spent more than $55,000 for consulting work by Kimberly Tapscott-Munson, a marketing professional who is a Fresno County Office of Education board trustee. Invoices show Tapscott-Munson performed a variety of services including community meetings, picking up supplies, and organizing events. She charged $25 an hour.

Valley Pastor Reflects on His Life or Death Battle With COVID