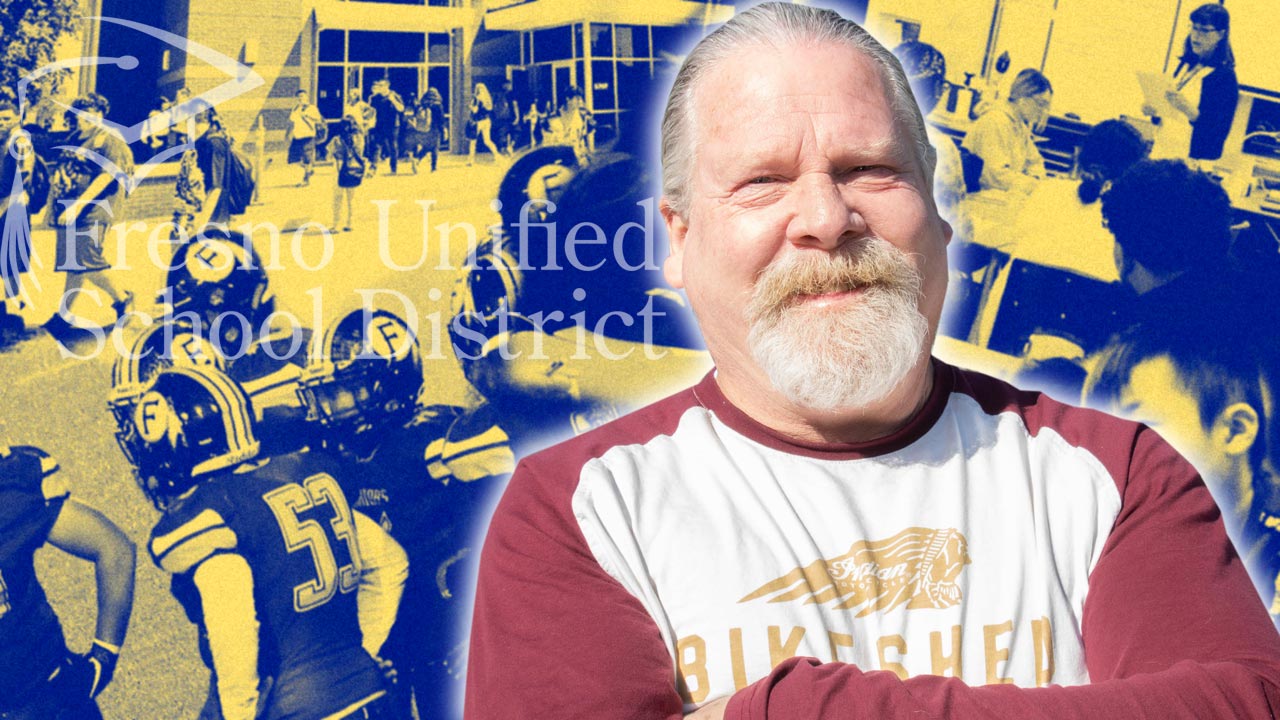 Allen is one of two Fresno High alumni seeking election to the Area 5 seat that was held by Trustee Carol Mills until her death last July. The other candidates in the April 12 special election are retired firefighter Andrew Fabela, community organizer/teacher Andy Levine, and retired parole administrator Daniel Renteria.

Allen retired from a long teaching career in February 2021, giving him more time for his family, taking care of several rental properties in his central neighborhood, and riding his motorcycle, a 2020 Indian Chieftain.

He seems to cultivate a rebel image — with his goatee and long gray hair pulled back in a short plait, Allen looks the part of the biker. But motorcycling is more Zen for him.

“One of the best forms of mental therapy there is, is motorcycle therapy for some of us,” he said. “And you know, we can be feeling dark and angry about things, go out for a beautiful ride and come back and it’s all behind us. I’ve found that this kind of therapy is very good.”

Growing up, Allen said, he struggled with misshapen legs and deafness in his left ear. His mother decided not to put him in “Forrest Gump-like” leg braces, so it took him decades of learning how to adjust his gait. His deafness sometimes created difficulty in hearing properly and led to some schoolhouse bullying. 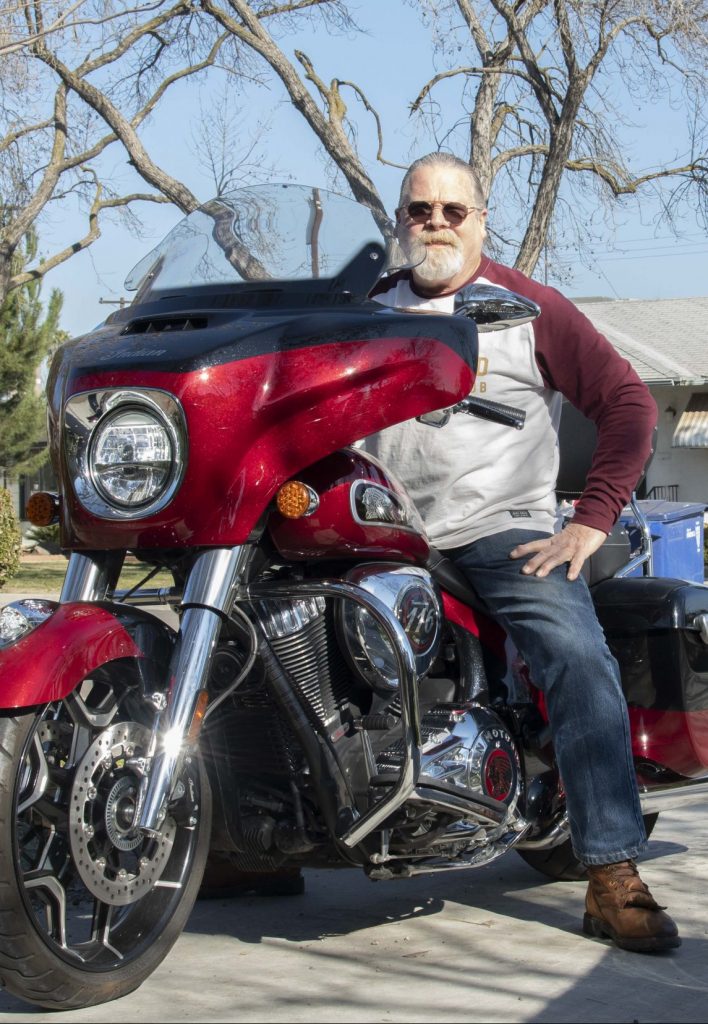 Questions about his disabilities and adverse education experiences turned him into a self-described “very angry young man” who was determined to do things his way.

His father, who he said turned to teaching after he was fired as a minister, told him he’d make a good teacher. Allen attended and graduated from Fresno High, as did two of his brothers and three of his five kids in his blended family.

But Allen decided that he didn’t want to go to college and instead went into manual trades after high school. After seven years that included several lengthy layoffs between jobs, “I realized dad was right.”

So he enrolled at National University, first earning an associate’s degree and then a bachelor’s of business administration with a minor in psychology. His goal was to become an organizational psychologist, but since there were no programs in Fresno and he didn’t want to relocate from his family to another part of the state, he headed in a different direction — teaching.

“The only door that opened for me in a professional manner was that of being a teacher, and I found that I loved the job,” he said. “I absolutely loved hearing a kid squeal with delight when they got it.”

Teachers don’t always realize their impact immediately, but they can change the course of students’ trajectories with their interaction, Allen said. He recounted how a former Scandinavian student returned to the school after graduation to tell Allen how much he had “hated” having Allen as his teacher.

“What kind of value can you put on a kid coming back? And the fact that he made the trek to Scandinavian to tell me that, that it was important enough to him.”

As much as he loved teaching, Allen said he decided it was time to retire after the pandemic closed schools to in-person instruction. He said he felt virtual instruction wasn’t giving students a good education, and he didn’t want to continue to draw a paycheck under those circumstances.

He keeps busy working on several rental properties he owns in central Fresno neighborhoods and spending time with family, including his 10 grandkids. But he still has plenty of time to devote to serving on the School Board. His campaign is self-financed — “Campaign donations imply I will do favors” — with some yard signs, leaflets, and other materials. He has a campaign website.

Schools Need to Connect with Kids

He’s got some ideas about what he thinks it will take to turn around student performance in Fresno Unified, which historically underperforms the state average on standardized tests. His own grandson is an example of how kids can flourish, or flounder, depending on their circumstances.

At Yokomi Elementary, his grandson struggled academically, but that all changed when he enrolled at Bullard TALENT, a K-8 Elementary magnet school where he has gotten involved with mariachi, jazz band, and dance. He made the merit list for the first time in his academic career, Allen said.

“Why? Because he is so engaged and excited about his learning,” he said. “It’s what makes a difference, that the students actually feel that they have something that’s truly for them in their learning. And they’re not just being forced to regurgitate a bunch of lessons that are irrelevant to them and their life.”

Nelson said that as much as he loved teaching and working for Fresno Unified, the politics that can sift to the classroom level made the job less enjoyable. And what kind of a job does he think Superintendent Bob Nelson and district managers have done?

Compared to his predecessor, former Superintendent Michael Hanson, Allen said, Nelson is doing much better. Allen says he’s limited in information about some facets of the district administration and has “much learning to do, but I am optimistic that he truly is giving Fresno Unified his very best and keeping things positive in these difficult days.”

As for the controversial Fresno High mascot change, Allen says he knows that the old mascot image of an American Indian was troublesome for some people. But the manner in which the school and school district went about making the change was even more troublesome for him and many others, he said.

“They did not involve their community,” he said. “And no, I, for one, do not appreciate their hasty removal of a longstanding emblem.”

Allen says he’s also not in favor of a proposed COVID-19 vaccine mandate for students or staff. Gov. Gavin Newsom has proposed adding it to the inoculations that students are required to have before enrolling once the vaccine has full FDA approval.