Biden's State of the Union Address Comes Amid War Abroad, US Discord 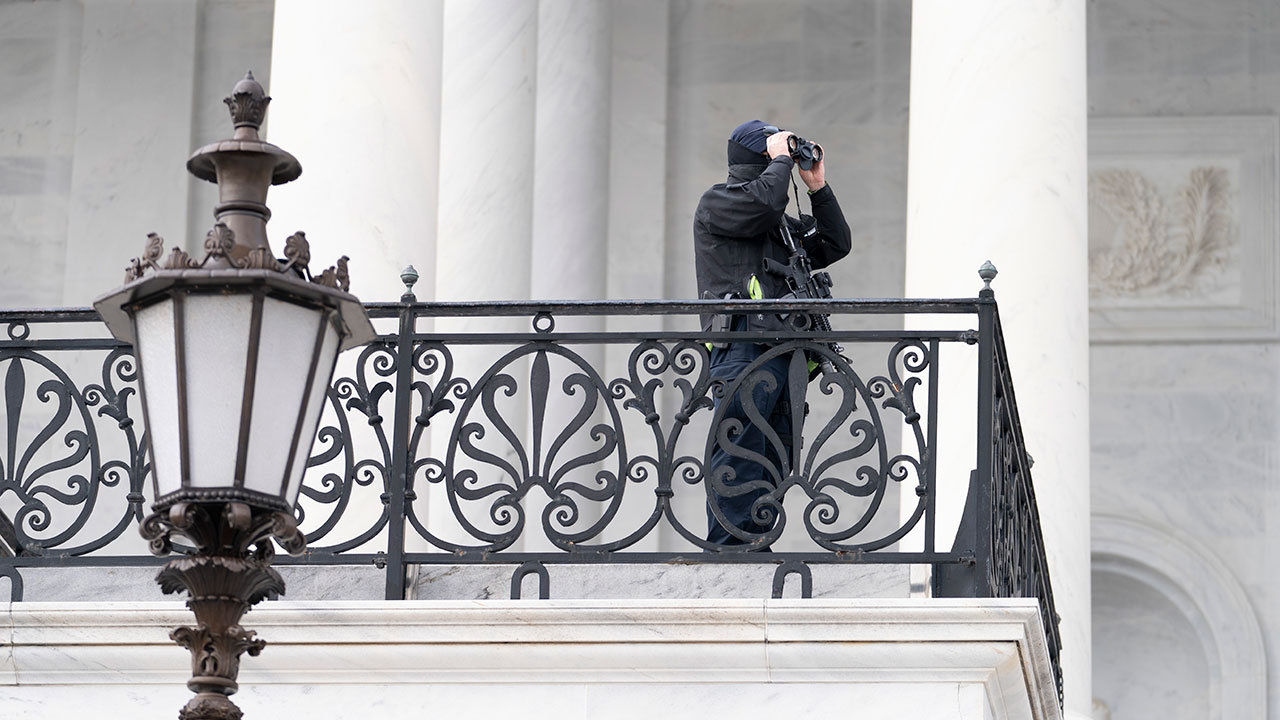 A police officer checks outside of the Capitol building, Tuesday, March 1, 2022 ahead of the State of the Union address. (AP/Mariam Zuhaib)
Share with friends

WASHINGTON — Facing disquiet at home and danger abroad, President Joe Biden will deliver his first State of the Union address at a steeply challenging moment for the nation, aiming to navigate out of the pandemic, reboot his stalled domestic agenda and confront Russian aggression.

The White House had conceived Tuesday night’s speech as an opportunity to highlight the improving coronavirus outlook, rebrand Biden’s domestic policy priorities, and show a path to lower costs for families grappling with soaring inflation. But it has taken on new significance with Russia’s invasion of Ukraine and nuclear saber-rattling by Vladimir Putin.

Biden planned in his remarks to highlight the bravery of Ukrainian defenders and the resolve of a newly reinvigorated Western alliance that has worked to rearm the Ukrainian military and cripple Russia’s economy through sanctions.

He will speak to “the importance of the United States as a leader in the world, standing up for values, standing up for global norms,” press secretary Jen Psaki said. Biden spoke with Ukrainian President Volodymyr Zelenskyy by phone a few hours before his speech at the Capitol.

In an interview with CNN and Reuters, Zelenskyy said he urged Biden to deliver a strong and “useful” message about Russia’s invasion. Ahead of the speech, the White House announced that Ukrainian Ambassador to the U.S. Oksana Markarova would join first lady Jill Biden in the galleries to watch Biden’s address.

Biden will address a mask-optional crowd in the House chamber, one sign of the easing coronavirus threat. But he’ll also speak from within a newly fenced Capitol due to renewed security concerns after last year’s insurrection.

Rising energy prices as a result of Russia’s war in Ukraine risk exacerbating inflation in the U.S., which is already at the highest level in 40 years, eating into people’s earnings and threatening the economic recovery from the pandemic. And while the geopolitical crisis in Eastern Europe may have helped to cool partisan tensions in Washington, it can’t erase the political and cultural discord that is casting doubt on Biden’s ability to deliver on his pledge to promote national unity.

Biden is speaking to an American public that is frustrated with his performance. A February AP-NORC poll found that more people disapproved than approved of how Biden is handling his job, 55% to 44%. That’s down from a 60% favorable rating last July.

White House officials acknowledge the mood of the country is “sour,” citing the lingering pandemic and inflation. Biden, in his speech, will highlight progress from a year ago — with the majority of the U.S. population now vaccinated and millions more people at work — but also acknowledge that the job is not yet done, a recognition of American discontent.

Biden aides say they believe the national psyche is a “trailing indicator” that will improve with time. But time is running short for the president, who needs to salvage his first-term agenda to revive the political fortunes of his party before November’s midterm elections.

House Republicans say the word “crisis” describes the state of the union under Biden and Democrats — from an energy policy that lets Russia sell oil abroad to challenges at home over jobs and immigration.

At least a half dozen lawmakers, including Reps. Jamie Raskin and Pete Aguilar, both members of the committee investigating last year’s Capitol riot, and Sen. Alex Padilla, D-Calif., had tested positive for COVID-19 and were not expected at the Capitol for the speech.

Where his speech to Congress last year saw the rollout of a massive social spending package, Biden plans this year to repackage past proposals in search of achievable measures he hopes can win bipartisan support in a bitterly divided Congress before the elections.

The president was to highlight investments in everything from internet broadband access to bridge construction from November’s $1.2 trillion bipartisan infrastructure law as an example of government reaching consensus and delivering change for the nation.

He also planned to appeal to lawmakers to compromise on rival competitiveness bills that have passed the House and Senate, both meant to revitalize high-tech American manufacturing and supply chains in the face of growing geopolitical threats from China.

The speech comes as progress on many of Biden’s other legislative priorities remains stalled on Capitol Hill, after Democratic Sen. Joe Manchin scuttled the sweeping “Build Back Better” spending bill that Biden championed last fall.

As part of his pitch to voters, Biden was to resurrect components of the legislation, but with a new emphasis on how proposals like extending the child tax credit and bringing down child care costs could bring relief to families as prices rise. He was also to outline how his climate change proposals would cut costs for lower- and middle-income families and create new jobs.

Psaki said Biden “will absolutely use the word inflation” in the speech, but emphasized that he was focused on “how people experience it” rather than looking at it as a statistic.

As part of that push, Biden was expected to call for lowering health care costs, pitching his plan to authorize Medicare to negotiate prescription drug prices, as well as an extension of more generous health insurance subsidies now temporarily available through the Affordable Care Act marketplaces where 14.5 million people get coverage.

He planned to propose new initiatives on mental health that dovetail with growing bipartisan interest in Congress amid evidence that the pandemic has damaged the national psyche, and discuss new ways to improve access to health benefits for veterans sickened by exposure to the burning of waste during their service, officials said.

Will Appeal for Action on Gun Control

Biden also was to appeal for action on voting rights, gun control, and police reform, which have failed to win significant Republican backing.

The president was also to push the Senate to confirm federal judge Ketanji Brown Jackson to be the first Black woman on the Supreme Court. He nominated her last week.

The physician’s office for Congress recently ended the House’s face-covering requirement after the government eased its mask-wearing guidelines. Mask wearing is now optional in the House chamber, which will be open to all members of Congress but not their guests. Attendees are required to take COVID-19 tests before the speech.

Seating for Biden’s address to a joint session of Congress last April was capped at about 200, about 20% of the usual capacity for a presidential speech. White House aides fretted that a repeat Tuesday would spoil the message the president aimed to deliver.