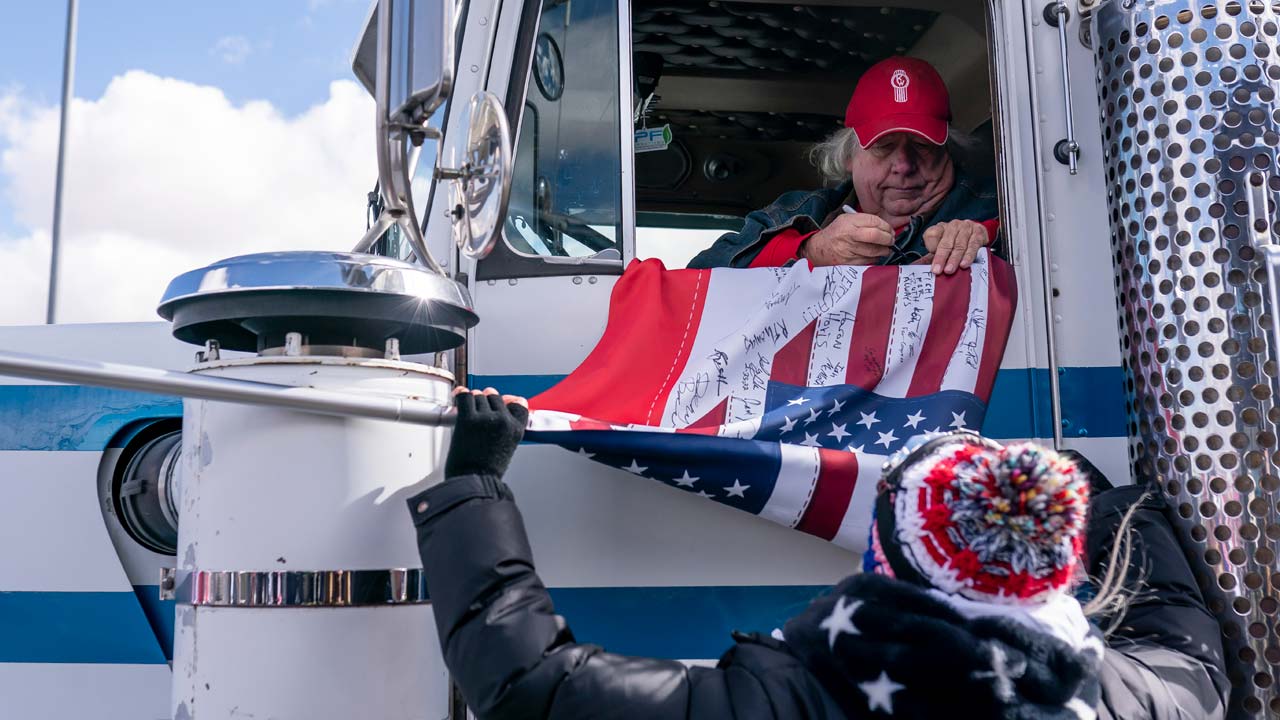 A truck driver signs an American flag at the beginning of a trucker caravan to Washington, D.C., called The People's Convoy on Wednesday. (AP Photo/Nathan Howard)
Share with friends

A small convoy of truckers demanding an end to coronavirus mandates began a cross-country drive from California to the Washington, D.C., area on Wednesday.

Several hundred people rallied in a parking lot in the cold, windswept Mojave Desert town of Adelanto before about two dozen trucks and a number of other vehicles hit the road. It wasn’t clear how many intended to go all the way.

Convoy vehicles carried signs with slogans such as “Legalize freedom” and “Let them breathe.”

It was one of several U.S. convoys organized online and modeled on the recent Canadian truckers’ protests that shut down U.S.-Canadian border crossings and besieged the streets of the capital, Ottawa, for weeks. The convoys all have different starting points, departure dates and routes.

A statement issued by organizers of the Adelanto group called it “The People’s Convoy” and said it was multicultural and nonpartisan, although there were Trump flags at the rally.

The statement said “COVID is well-in-hand now, and Americans need to get back to work in a free and unrestricted manner.”

It pledged a “100% safe, lawful and peaceful journey” that will “terminate in the vicinity of the DC area, but will NOT be going into DC proper.” Arrival was scheduled for March 5.

Truck driver Dallas Hughbanks, 61, said his message is freedom of choice, and he specifically noted that he doesn’t want to wear a mask.

The Pentagon has approved the deployment of 700 unarmed National Guard troops to the nation’s capital as it prepares for multiple trucker convoys. The troops would be used to assist with traffic control during demonstrations expected in the city in the coming days, the Pentagon said.

The protest comes as average daily COVID-19 cases and hospitalizations are continuing to fall in the U.S., an indicator that the omicron variant’s hold is weakening across the country, and mandates are being loosened or lifted.

Public health experts say they feel hopeful that more declines are ahead, but many worry U.S. vaccinations remain below expectations, concerns that are exacerbated by the lifting of COVID-19 restrictions.

Rhapsody’s in Fresno Serves up Comfort Food with Southern Soul