Rents Go 'Insane' Across US With No End in Sight 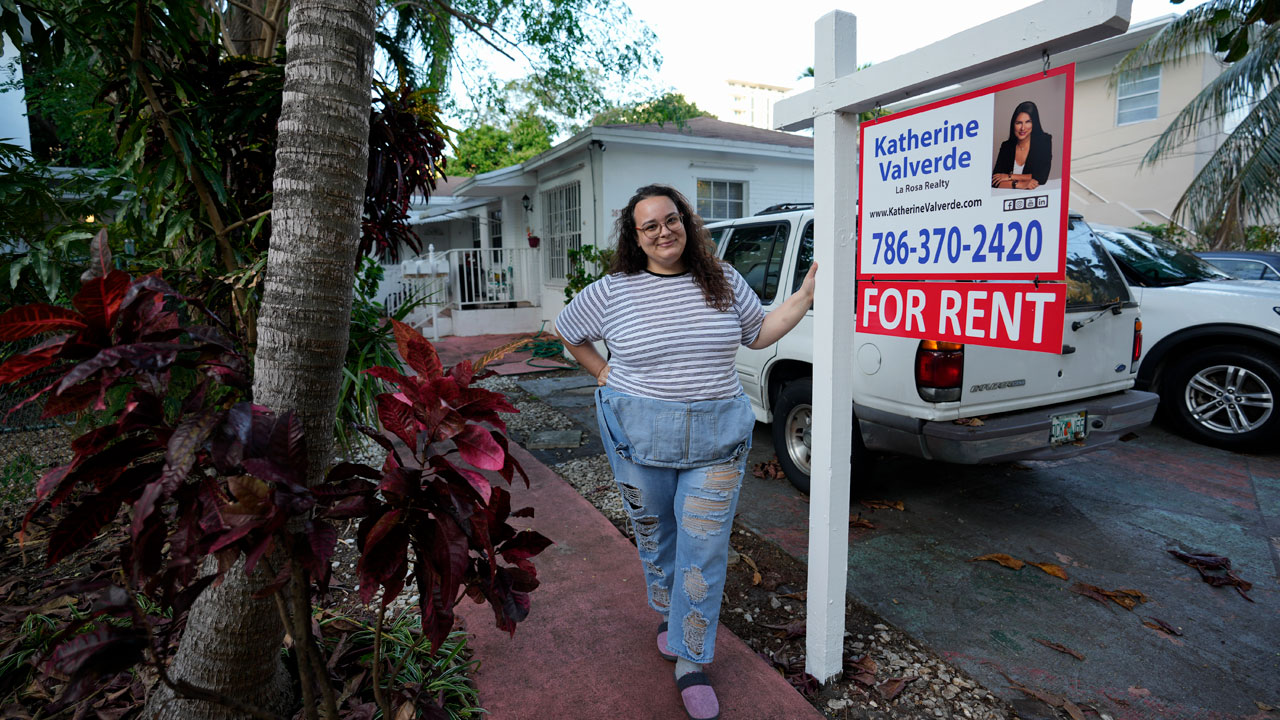 Krystal Guerra, 32, was forced to leave her Miami area apartment after 26% rent increase by a new landlord. (AP/Rebecca Blackwell)
Share with friends

Experts say many factors are responsible for astronomical rents, including a nationwide housing shortage, extremely low rental vacancies, and unrelenting demand as young adults continue to enter the crowded market.

But Guerra was fine with the apartment’s shortcomings. It was all part of being a 32-year-old graduate student in South Florida, she reasoned, and she was happy to live there for a few more years as she finished her marketing degree.

That was until a new owner bought the property and told her he was raising the rent from $1,550 to $1,950, a 26% increase that Guerra said meant her rent would account for the majority of her take-home pay from the University of Miami.

“I thought that was insane,” said Guerra, who decided to move out. “Am I supposed to stop paying for everything else I have going on in my life just so I can pay rent? That’s unsustainable.”

Guerra is hardly alone. Rents have exploded across the country, causing many to dig deep into their savings, downsize to subpar units or fall behind on payments, and risk eviction now that a federal moratorium has ended.

In the 50 largest U.S. metro areas, median rent rose an astounding 19.3% from December 2020 to December 2021, according to a Realtor.com analysis of properties with two or fewer bedrooms. And nowhere was the jump bigger than in the Miami metro area, where the median rent exploded to $2,850, 49.8% higher than the previous year.

Other cities across Florida — Tampa, Orlando, and Jacksonville — and the Sun Belt destinations of San Diego, Las Vegas, Austin, Texas, and Memphis, Tennessee, all saw spikes of more than 25% during that time period.

Rising rents are an increasing driver of high inflation that has become one of the nation’s top economic problems. Labor Department data, which covers existing rents as well as new listings, shows much smaller increases, but these are also picking up. Rental costs rose 0.5% in January from December, the Labor Department said last week. That may seem small, but it was the biggest increase in 20 years, and will likely accelerate.

Economists worry about the impact of rent increases on inflation because the big jumps in new leases feed into the U.S. consumer price index, which is used to measure inflation.

Inflation jumped 7.5% in January from a year earlier, the biggest increase in four decades. While many economists expect that to decrease as pandemic-disrupted supply chains unravel, rising rents could keep inflation high through the end of the year since housing costs make up one-third of the consumer price index.

Things have gotten so bad in Boston, which has nearly overtaken San Francisco as the nation’s second-most expensive rental market, that one resident went viral for jokingly putting an igloo on the market for $2,700 a month. “Heat/ hot water not included,” Jonathan Berk tweeted.

Experts say many factors are responsible for astronomical rents, including a nationwide housing shortage, extremely low rental vacancies, and unrelenting demand as young adults continue to enter the crowded market.

According to the U.S. Census Bureau, rental vacancy rates during the fourth quarter of 2021 fell to 5.6%, the lowest since 1984.

Whitney Airgood-Obrycki, lead author of a recent report from Harvard University’s Joint Center for Housing Studies, said there was a lot of “pent-up demand” after the initial months of the pandemic, when many young people moved back home with their parents. Starting last year, as the economy opened up and young people moved out, “rents really took off,” she said.

According to the U.S. Census Bureau, rental vacancy rates during the fourth quarter of 2021 fell to 5.6%, the lowest since 1984.

“Without a lot of rental vacancy that landlords are accustomed to having, that gives them some pricing power because they’re not sitting on empty units that they need to fill,” said Danielle Hale, Realtor.com’s chief economist.

Homes for Sale at Record Low

Meanwhile, the number of homes for sale have been at a record low, contributing to ballooning home prices that have caused many higher-income households to remain renters, further upping demand.

Construction crews are also trying to bounce back from material and labor shortages that at the start of the pandemic made a preexisting shortage of new homes even worse, leaving an estimated shortfall of 5.8 million single-family homes, a 51% leap from the end of 2019, Realtor.com said.

And potentially compounding all of this is the increasing presence of investors.

A record 18.2% of U.S home purchases in the third quarter of 2021 were made by businesses or institutions, according to Redfin, as investors targeted Atlanta, Phoenix, Miami, Charlotte, North Carolina, and Jacksonville, Florida — popular destinations for people relocating from pricier cities.

Hale said the increasing presence of investors is a factor in rent hikes, but only because they have pricing power due to low vacancies. “I don’t think that’s the only driver,” she said.

Most investors aren’t tied down by rent control. Only two states, California and Oregon, have statewide rent control laws, while three others – New York, New Jersey, and Maryland – have laws allowing local governments to pass rent control ordinances, according to the National Multifamily Housing Council.

In Tucson, Arizona, the mayor’s office said it has been deluged with calls from residents worried about rent hikes after a California developer recently bought an apartment complex that catered to older people and raised rents by more than 50%, forcing out many on fixed incomes.

And laws in some states like Arizona actually restrict local jurisdictions from limiting what landlords can charge tenants.

In Tucson, Arizona, the mayor’s office said it has been deluged with calls from residents worried about rent hikes after a California developer recently bought an apartment complex that catered to older people and raised rents by more than 50%, forcing out many on fixed incomes.

The rent on a one-bedroom apartment in the complex went from $579 to $880 a month, an increase legal under Arizona state law.

Arizona Sen. Kyrsten Sinema decried the increases during a recent Senate Banking Committee hearing, saying Arizona’s rapidly growing housing costs have been a “major concern” of hers for years.

Nationally, Hale, the Realtor.com economist, expects rents to continue to rise this year, but at a slower pace, thanks to increased construction.

“Improving supply growth should help create more balance in the market,” said Hale, who forecasts rents to rise 7.1% in 2022.

In Miami, Guerra has started packing her belongings ahead of her March move-out date. She spent weeks frantically looking for places in her budget but said she couldn’t find anything that wasn’t “either incredibly small, incredibly broken down or an hour away from work and everyone I know.”

Her plan now is to put her things in storage and move in with her boyfriend, even though the timing isn’t ideal.

“We didn’t want to have the decision of moving in together forced upon us,” Guerra said. “We wanted it to be something we agreed to, but it’s happening before we wanted it to happen.”