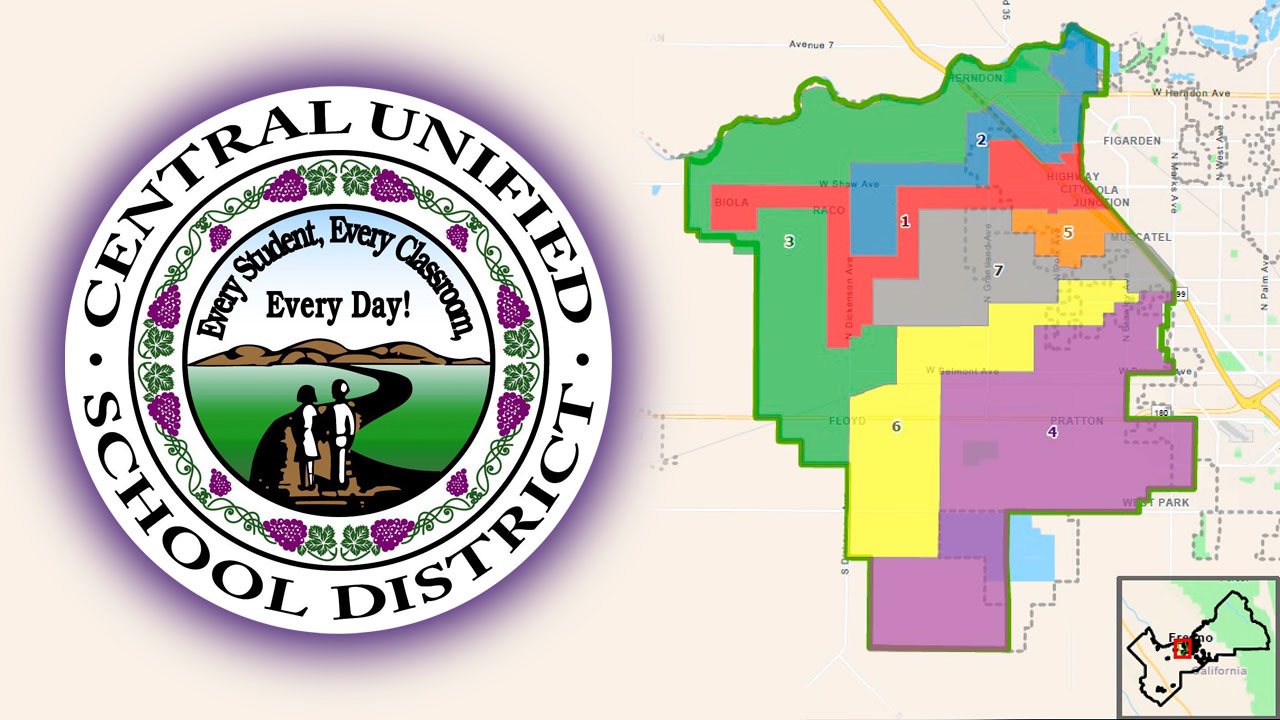 Update to earlier story: The Central Unified School Board voted 6-0 on Tuesday to approve map 104.1, a citizen-produced redistricting map for trustee areas that supporters said would leave neighborhoods intact. The board also voted unanimously to approve a new teacher contract. 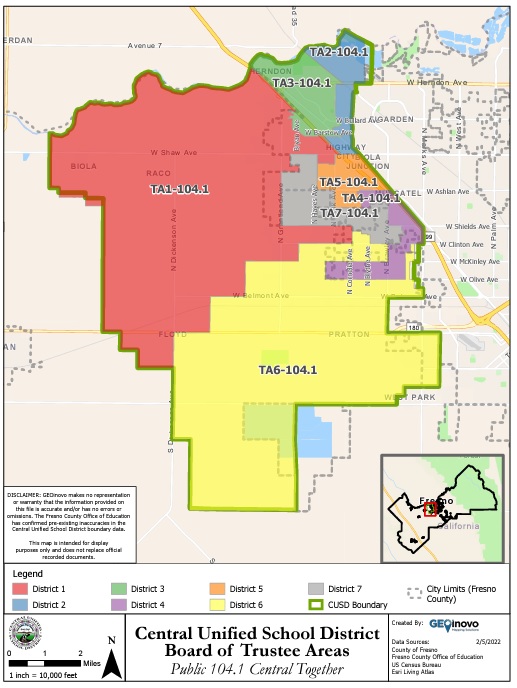 Central Unified School District teachers could soon get a big pay bump. The Board of Trustees is scheduled to consider at tonight’s meeting a new three-year labor contract with a 5.5% pay raise retroactive to July 1, 2021, and a one-time payment of $1,350, also retroactive to last July.

The board also is scheduled to vote on a new redistricting map for trustee areas. By state law the district must approve the new map by Feb. 28. It will not affect student attendance areas.

Trustees will consider the new labor contract and redistricting proposals at tonight’s School Board meeting. The open session is scheduled to start at 7 p.m. and will be held at Central East High School, 3535 N. Cornelia Ave.

According to the staff report, the Central Unified Teachers Association has already approved the tentative contract. In addition to the pay bumps, it would lower class sizes in secondary schools from 38 to 36 students, although class sizes could be larger in emergency conditions. The contract acknowledges that the lowered class sizes are contingent on staffing, and Central has faced the same challenges in staffing as other school districts.

The contract will cover the period through June 2024.

Central’s one-time stipend is somewhat smaller than the one-time payments that Fresno and Clovis unified school districts paid their employees last year. After Clovis Unified approved a $4,000 payment for teachers, Fresno teachers lobbied for a $3,200 payment. In addition to a one-time payment, Fresno Unified also agreed to compensate teachers for taking on extra classes or extra students to compensate for teacher absences.

A Handful of Redistricting Proposals

Also tonight the Central Unified trustees are scheduled to conduct a public hearing on six proposed redistricting maps, three of which were prepared by the district demographer and the other three submitted by the public.

The three demographer maps are comparatively more contiguous than the current map. Each of the six maps proposes markedly different geographic areas for the trustee areas.

For example, in the current map Trustee Area 6 is surrounded on the south by Trustee Area 4, but in the three demographer maps labeled A through C and citizen map 104.1 Area 6 encompasses the southern portion of the district. In the citizen-proposed maps 105.1 and 108.1, Area 6 occupies a smaller footprint and is surrounded by other trustee areas.

The goal of redistricting is to rebalance trustee areas that are out of balance because of population growth since the last redistricting 10 years ago. The new districts must maintain demographic balance and communities of interest and follow geographic boundaries. 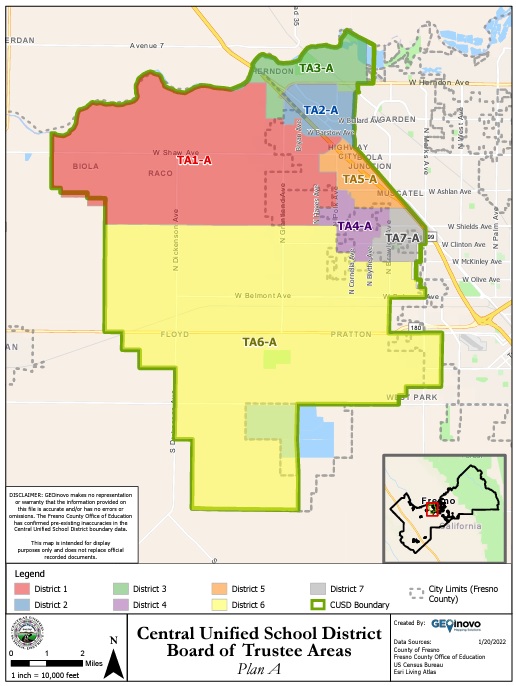 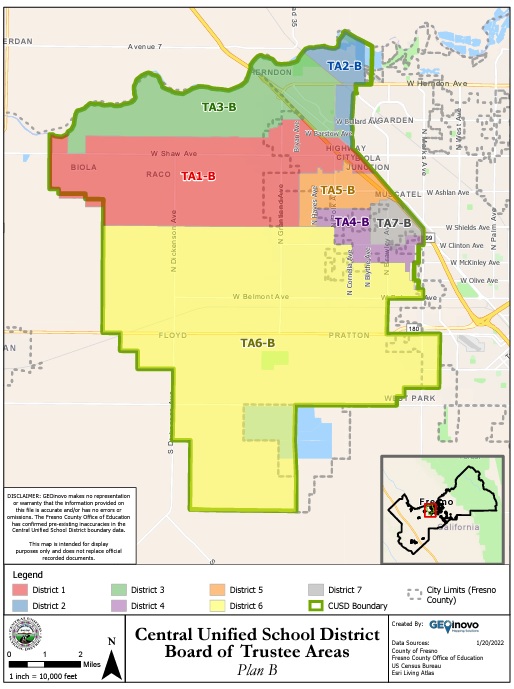 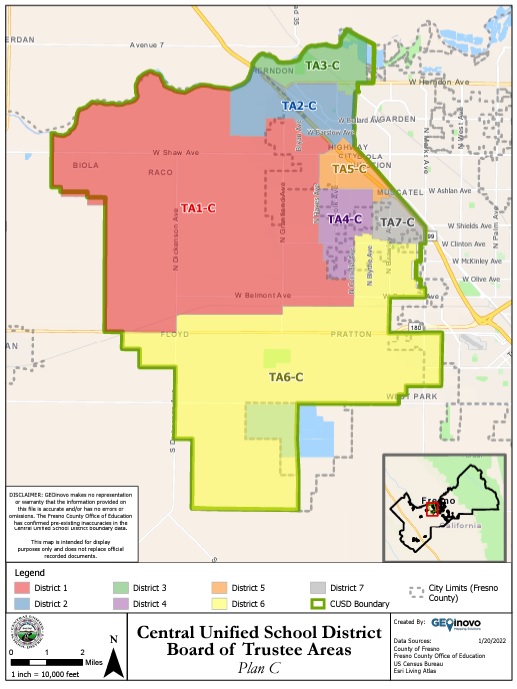 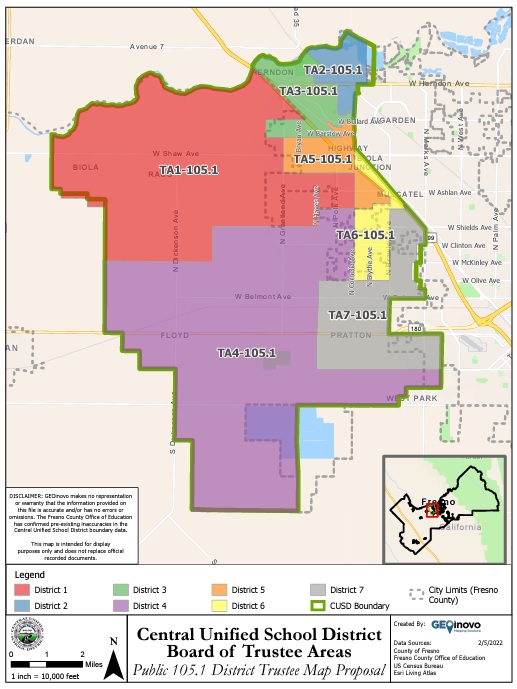 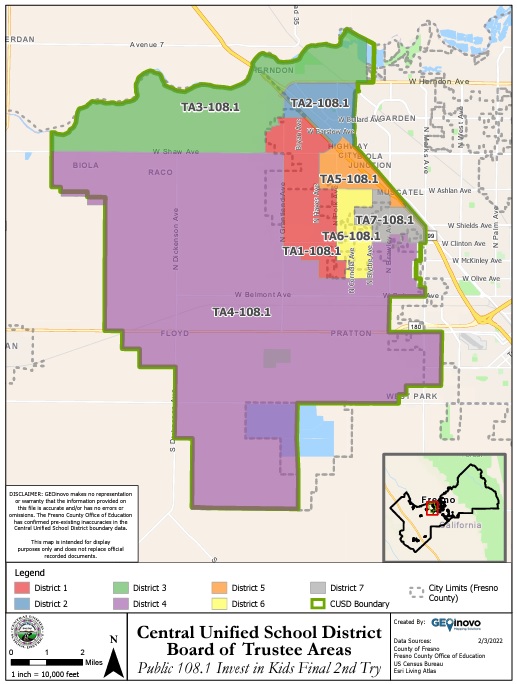 Related Topics:Central Unified School Board
Up Next

RIP, Dr. Paul Farmer, 62. He Healed the Poor Around the World.