Clovis School Trustee Offers Up His Own Redistricting Map 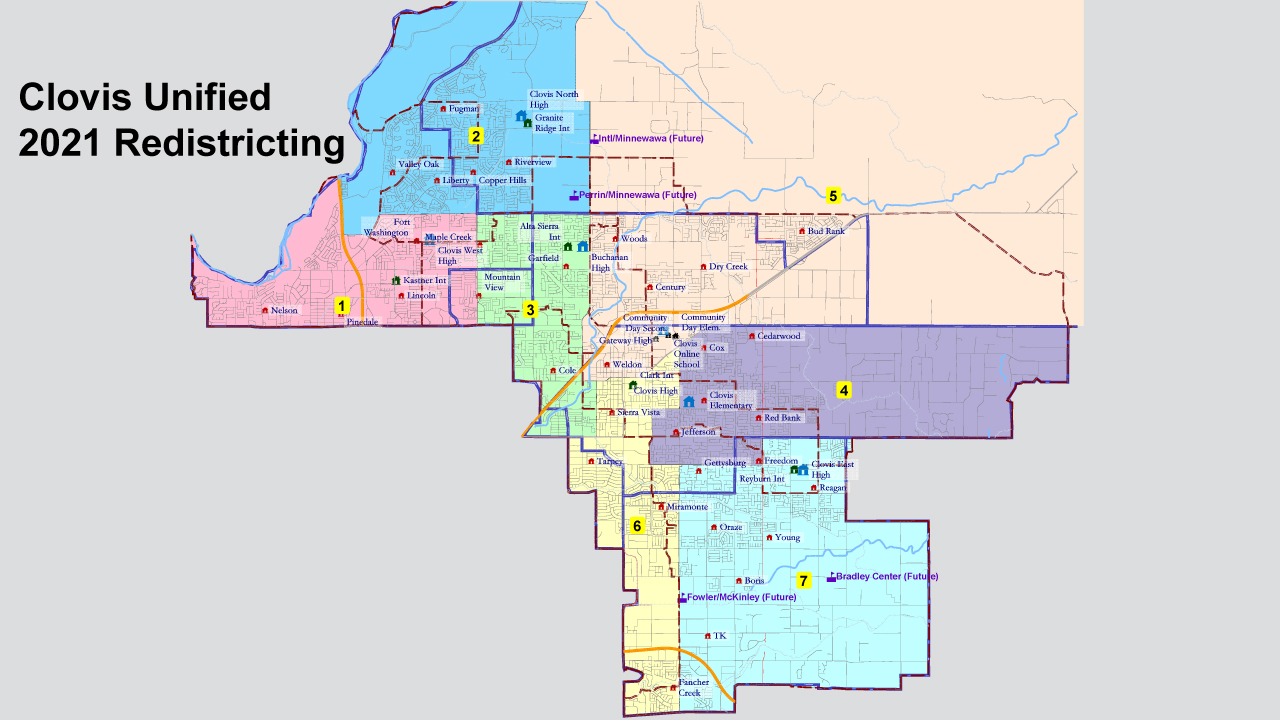 The Clovis Unified School Board will consider five redistricting map proposals, four prepared by the district’s hired demographer and a fifth put forward by Trustee Dr. Steven Fogg that also was drawn up by the demographer.

Fogg’s “Map 5b” would radically change the look of the trustee areas, pushing Area 5 that Fogg represents from a central spot on the district map up to the northeast and rearranging other trustee areas.

Some question whether Fogg is pitching a redistricting alternative that would corral some of his property in the northeast part of the district into Area 5.

He acknowledged that he owns a small ranch in the rural Appaloosa Acres neighborhood, but he says that’s not the reason he put forward a fifth option. Fogg said he may not even seek re-election in 2024.

District officials hasten to note that the trustee area boundary lines will not affect current school boundaries, a concern raised by some parents.

How to Redistrict Trustee Areas

One of the goals in prior redistricting years was to adhere more closely to the original boundary lines of the seven smaller districts that combined to form Clovis Unified, deputy superintendent Norm Anderson told the board this month.

Other goals include having at least two high schools served by each trustee area and maintaining current trustee residences in their areas, Anderson said.

After the last redistricting in 2012, the variance among the trustee area population was 1.28%, but population growth in the southeast and northeast have caused the variance to skyrocket to nearly 44%, he said.

The plans put forward by the demographer would leave room for future growth in trustee areas that are continuing to expand. The district staff was recommending Map 4 for board approval.

Map 5B would leave Area 1, which is not growing as fast as other areas, underpopulated while overpopulating Area 7, even though strong growth is forecast there.

The trustee areas also were being drawn to include the homes of the current board members. But the abrupt resignation earlier this month of Area 1 Trustee Susan Hatmaker gives the board more latitude now on where to draw the lines, Fogg said.

Area 6 Trustee Betsy Sandoval says she’s not in favor of Fogg’s proposal and questioned why he would want to make such a radical change to the trustee areas.

Just because the district historically followed the approximate lines of the seven original school districts doesn’t mean it always has to, he said.

Fogg says he has a hard time now describing Area 5, which takes in neighborhoods that serve Buchanan, Clovis, and Clovis East high schools. Fogg said he’s more familiar with the northeast area than Clovis East, although since he’s elected districtwide “I am responsible to everyone in the district.”

Area 6 Trustee Betsy Sandoval says she’s not in favor of Fogg’s proposal and questioned why he would want to make such a radical change to the trustee areas.

“I know he has property up in that area,” she said.

Sandoval said she supports the Map 4 recommendation of the district administration.

Fogg and interim Board President Tiffany Stoker Madsen both agreed at the last board meeting that it’s important for the School Board to make the best redistricting decision possible as the trustee areas will remain in place for the next 10 years.

Board Doesn’t Get the Last Word

The redistricting map must be approved by the School Board by Feb. 28, under California law.

The item is on the agenda for Wednesday’s board meeting, which starts at 6:30 p.m. and will be held in the district boardroom at 1680 David E. Cook Way in Clovis. The district is seeking public feedback on the map proposals at the redistricting website.

The School Board’s vote won’t be the last word on the redistricting plan. Because Clovis Unified is a “hybrid” district — trustees run in their home area but are elected by all Clovis Unified voters, not just those in their area — the plan will need approval from the Fresno County Committee on School District Reorganization, which is operated through the Office of the Superintendent of Schools. 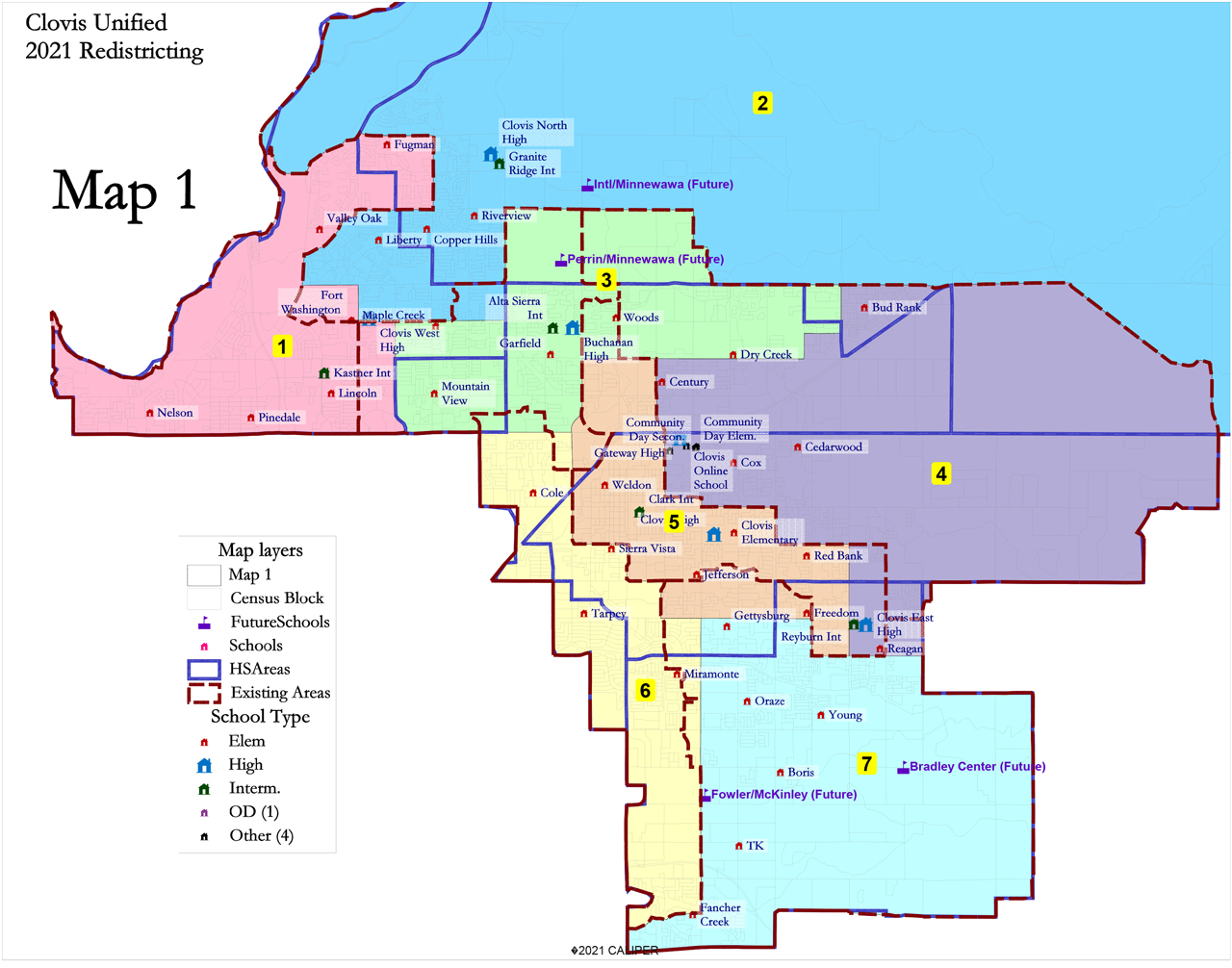 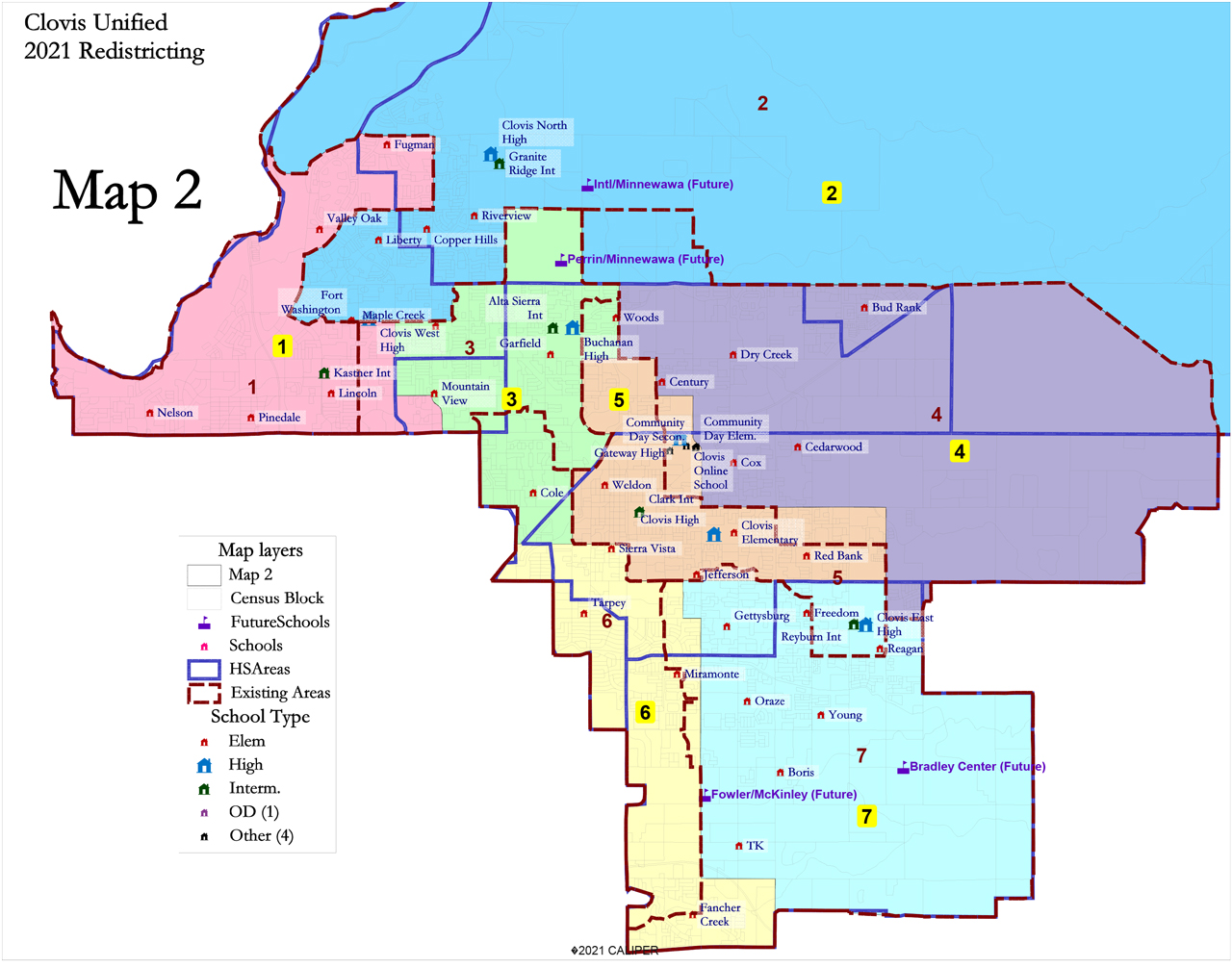 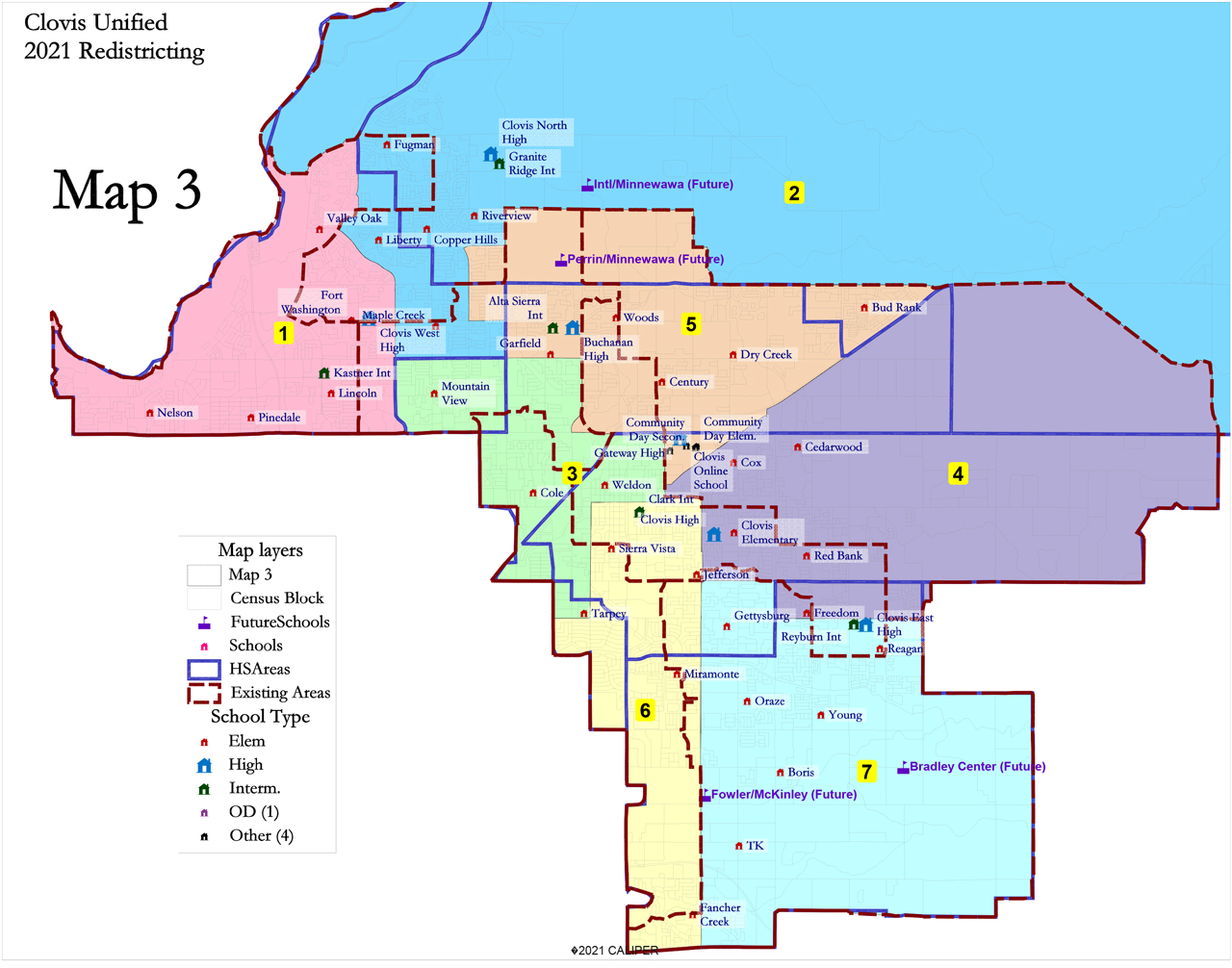 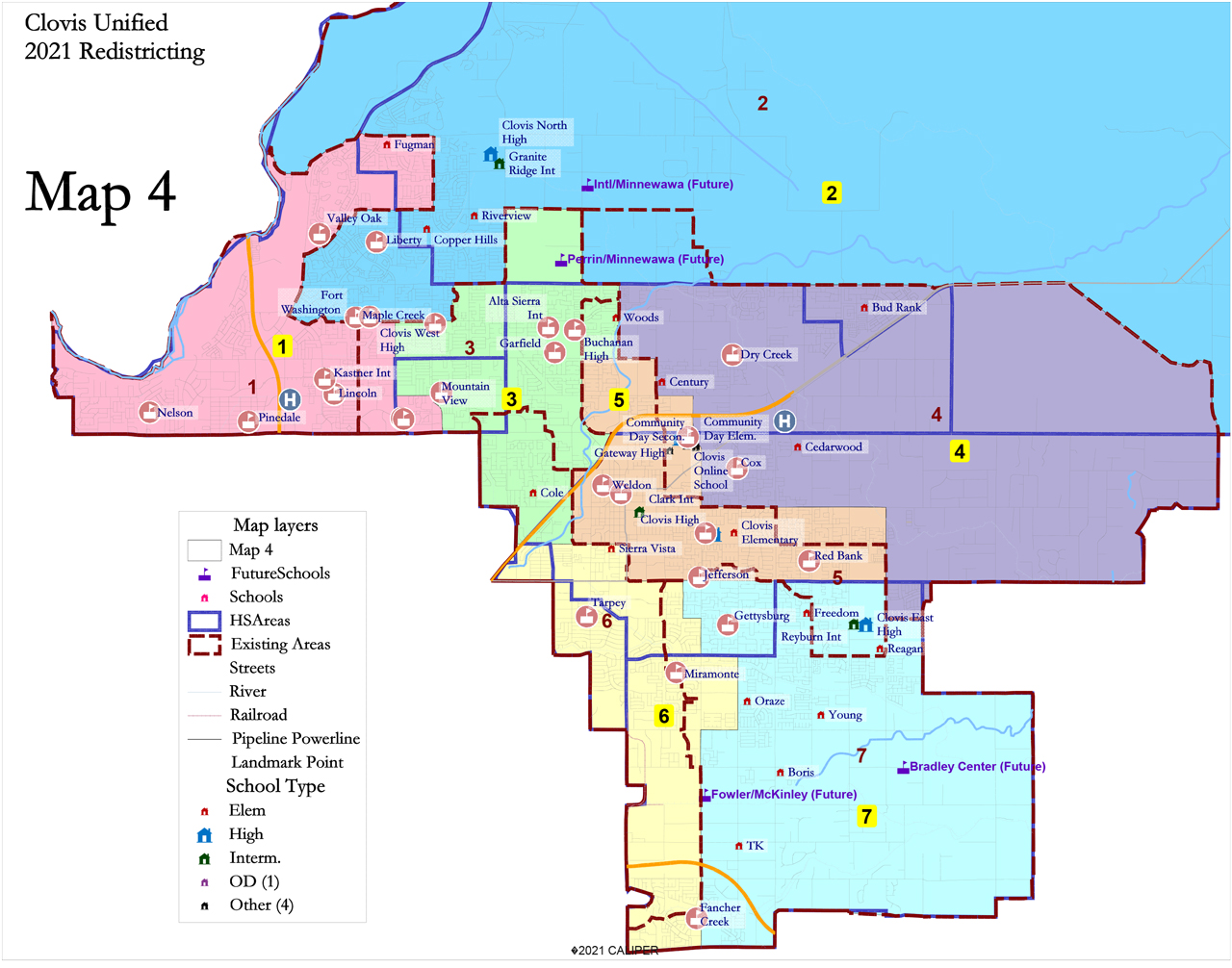 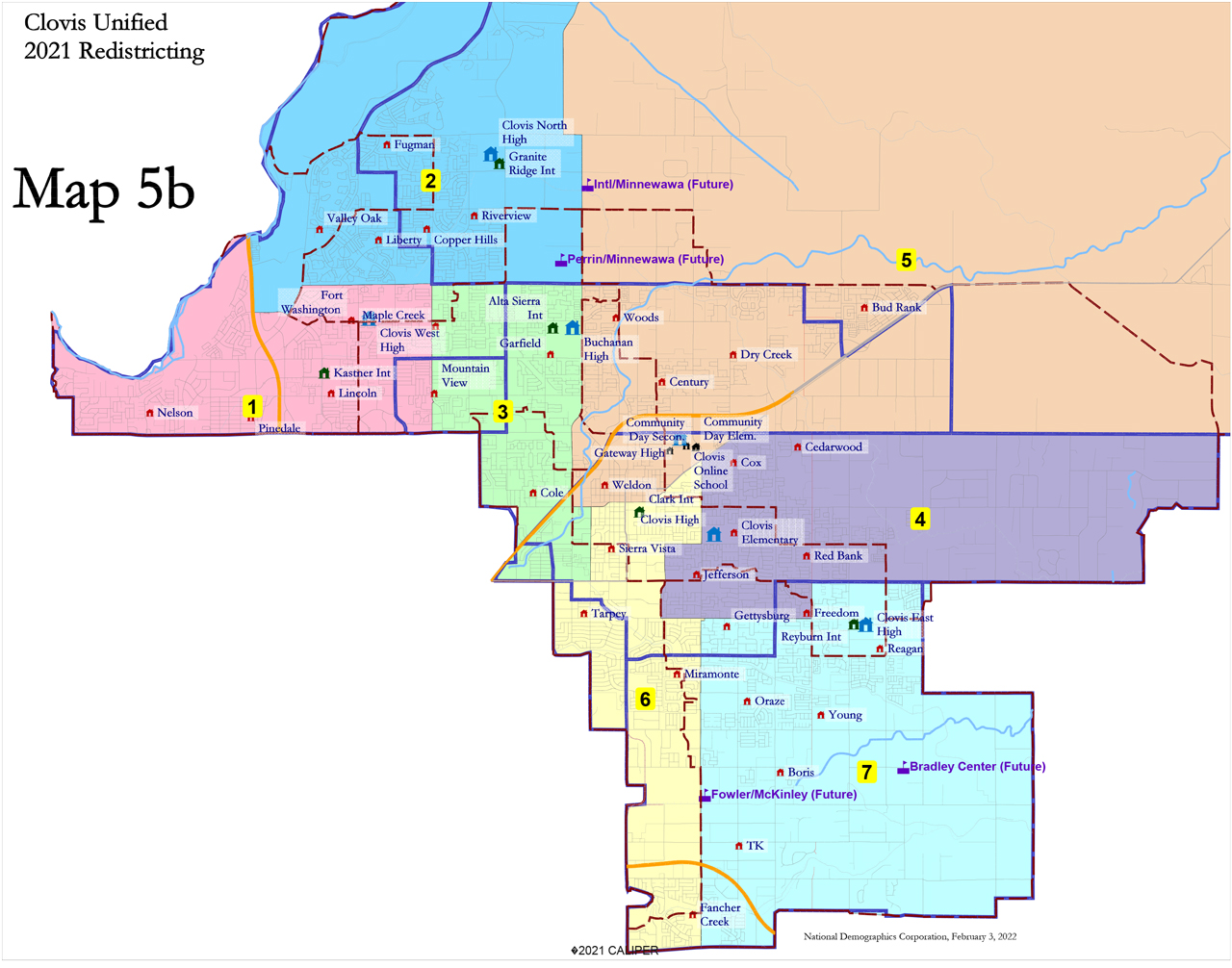