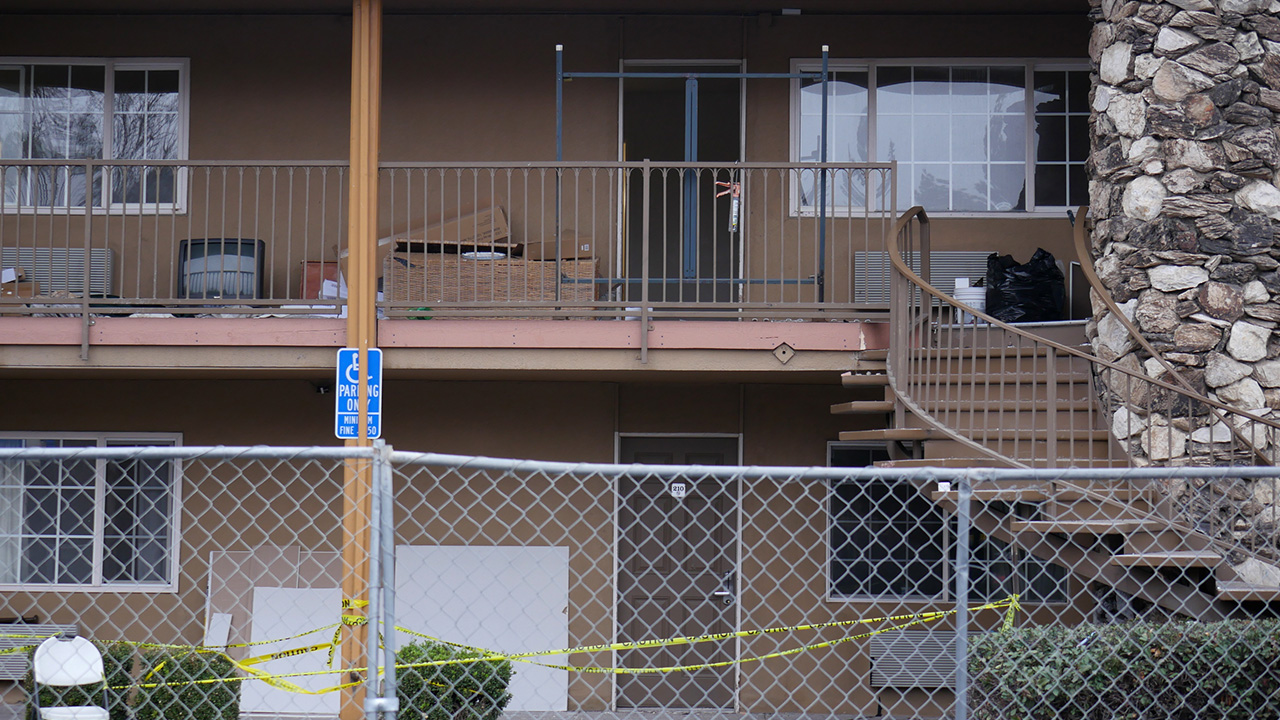 The Fresno City Council will be briefed on 15 housing policies that could go to the city council this month, with the goal of making Fresno housing more affordable, and easing homelessness.

Among these 15 policies, rent control, fair chance housing, and establishing a community land trust have been the most debated across the city.

“The housing crisis is a crisis because it’s extremely complex to solve, and now no one solution is going to solve the issue before us,” said councilmember Miguel Arias. “It’s going to be critically important for us to have a full and complete debate about every potential solution to address this crisis because it’s not going away anytime soon.”

What Are The Policies?

Initially, a report commissioned by the city in partnership with the Thrivance Group, an equitable land-use agency, recommended 46 policies for the city to implement.

That list was then narrowed to 15, and at least three other policies within the initial report have been supported by Mayor Jerry Dyer. 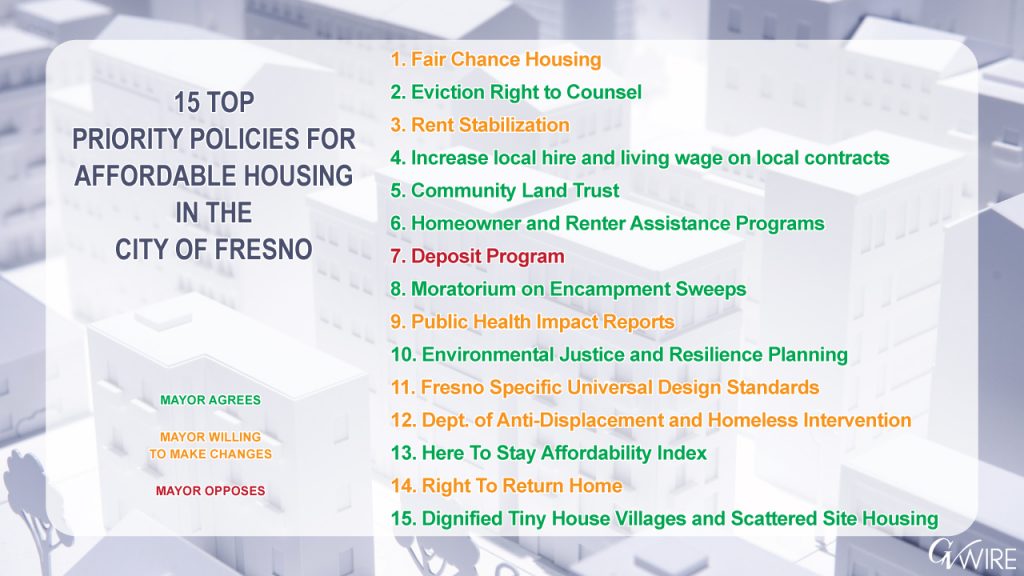 These 15 policy recommendations from the Thrivance Group will go to the Fresno City Council on Feb. 10 for approval. Mayor Dyer fully supports eight of them. (GV Wire/Paul Marshall)

Among the policies, citywide rent control is perhaps the most controversial. The policy has gained steam among renters, who have seen big rent hikes over the past five years.

“In Fresno, we have had the highest rent increases in the country without the increases in wages to justify that,” said Arias.

At a city council meeting on Thursday, Jan. 27, a woman named Fransisca said that she and her family lived like sardines in a tiny apartment.

Fransisca said that during the summer months, the air conditioner does not work and the landlord told her he could not fix it.

“One day I had a conversation with Mr. Arias and I told him that the rent in the apartments where I live is too high,” said Fransisca. “My husband works in construction and we still don’t make enough to live somewhere dignified.”

A 2021 report by the National Low Income Housing Coalition, stated that millions of renter households lost employment income and millions fell behind on their rent during the pandemic.

And, while the city has disbursed about $20 million in federal funds to protect residents from being evicted for failure to pay rent during the pandemic, it seems that help has not been enough.

According to Arias, the city has invested $144 million dollars to deal with the homeless crisis over the last three months, but rent increases are still causing people to become homeless.

“The homeless population has increased by a thousand people a year, the majority coming from individuals who are on fixed incomes and retired who don’t have the means to pay the additional 30% or 40% cost (of rent hikes),” said Arias.

The Fresno housing crisis is well-documented, but there is a critical divide among politicians, advocates, developers, and investors on how to increase affordable housing.

While Dyer has been open to accepting many of the policies presented by the Thrivance Group, the mayor has reservations about a citywide rent control program.

Dyer would only support rent control if the city is able to subsidize rent for a specific group of landlords under the condition that their units remain affordable for a specific period of time.

“I see a local environment that is conducive to increasing supply. And I see housing equity for all city residents,” said Dyer.

Where Do City Councilmembers Stand On Rent Control?

Councilmember Luis Chavez says he wants to analyze the policies more closely once they are presented to the council.

“On rent control, I want to see how that’s going to be structured,” said Chavez.

Councilman Garry Bredefeld acknowledged that while Fresno needs more housing, he said that a rent stabilization program was not the answer.

“Rent control is destructive to the industry,” said Bredefeld. “What is the solution? Getting rid of regulations and artificial barriers.”

Bredefeld explained that Fresno needed to increase its housing stock rather than implement policies that could stunt further development.

“My worry is that even talking about rent control scares investors away,” said Karbassi. “We do have a problem. That’s the reason why we’re here today having this discussion and part of that problem is the city is not working fast enough to actually construct market-rate housing.”

Karbassi said that without new investment in housing, Fresno would continue to experience a housing shortage.

“Then that’s going to naturally increase the price and it becomes a self-fulfilling prophecy,” said Karbassi.

Should City Focus on Slumlords?

Arias says that fixing the housing shortage and improving affordability isn’t easy because the stakeholders have different perspectives.

He says landlords will often increase rent by 30% and not have a justifiable reason for doing it. In fact, he says he often hears from tenants who will complain about their rents going up even though there have been no improvements to their property.

All the while, renters are now having to keep up with the pace of inflation and with the cost of living.

“So yeah, everybody has a genuine perspective, a legitimate lived experience that makes any of these potential solutions a challenge,” said Arias.

Karbasssi says that local governments have the resources at their disposal to fix the housing crisis.

“When it comes to slumlords, we actually have quite a few tools in our box.,” said Karbassi. “I think our government has a big responsibility to make sure we prevent slumlords and people living in those conditions, no matter how much money you have or don’t have, that you have a right to standard housing.”

Dyer promised he would recommend allocating $1 million in ARPA funding to bring affordable housing to Fresno on the condition that these funds can be accessed by landlords and used for property improvements.

These rental properties could then become more affordable for tenants, the mayor said.

GV Wire reached out to councilmembers Esmeralda Soria, Tyler Maxwell, and Council President Nelson Esparza for this story, but they were unavailable for comment.

Related Story: Why Is Fresno One of the Nation’s Hottest Housing Markets?

Who Impressed, Who Bailed at Forum for Nunes Seat Hopefuls