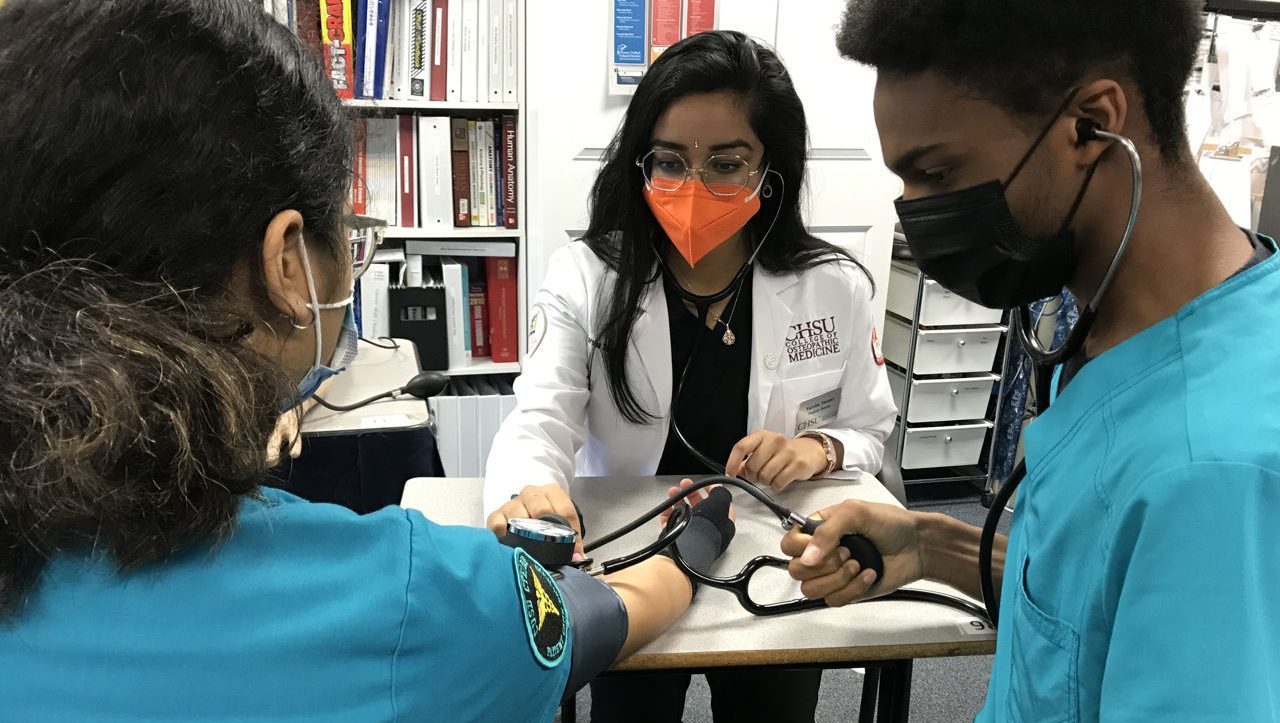 Two classrooms at Clovis East High School were crowded on Tuesday morning with students who are learning about medicine and healthcare. The ones in the white coats were medical students from California Health Sciences University in Clovis, while the younger ones in teal scrubs were the juniors in Dr. Kelly Eichmann’s patient care pathway program.

The learning, as it turned out, was two-way. Varsha Swamy, who is in her second year at CHSU, said she learned something new on Tuesday.

“The students here are so curious, and they’re really engaged with what we’re teaching them,” she said. “So we get a lot of great questions that sometimes we need to research ourselves. And actually, one of the students just taught me this neat trick for finding the radial pulse that I had not known before. So we’re constantly learning things.”

On Tuesday Clovis East juniors watched as the CHSU students demonstrated medical skills, including taking vital signs like blood pressure, listening to heart and lung sounds, and doing various assessments such as EKG and eyes and ear, and then gave the younger students the opportunity to perform the skills. 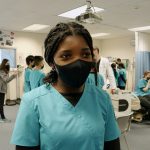 JaDan Rohrbach, 17, said she was already focusing on a future career as a pediatrician when her school counselor suggested she enroll in the patient care pathway. She said it has opened her eyes to a wide variety of healthcare careers.

Since the class is “very hands-on,” JaDan said, students get the opportunity to learn CPR and be certified, take vital signs, and do “all the things you would find in an actual hospital.”

On Tuesday, she said, “I learned a lot of different ways to treat patients, like how to deal with them if they’re in pain and stuff and you want to check them. Also, during the EKG I did learn the different heart rates that I didn’t know before, and with the orthopedic station, I learned how to put on a cast with this hard cast thing that I didn’t know how to use before. So that was very informational and that helped me know if I even wanted to do those things in my career.”

The two classrooms are designed to resemble hospital rooms and areas, with mannequins in hospital beds, medical equipment, and even X-rays taped high to one window.

The CHSU medical students bring along teaching devices, such as heads, knee and elbow joints, and other body parts from the university’s simulation lab, but the Clovis East classrooms are already fairly well equipped with teaching tools, they said. 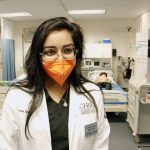 The medical students are members of a CHSU student organization that commits time to visiting classrooms such as those at Clovis East, Swamy said.

Although medical school takes up a significant amount of the CHSU students’ bandwidth, “it’s just about making the time for it (visiting classrooms),” she said. “We all are really passionate about the idea of giving back and helping out the community and trying to work with kids. So we just make the time when we can.”

The classroom lessons also reinforce what the medical students are themselves learning, Swamy said.

“I truly believe that the best way to learn a skill is to teach it. And so being able to take the skills we learned in class and teach them at a basic level to these high school students is really better for our knowledge,” she said.

Swamy said she wanted to help found the student organization because as a youngster growing up in Cupertino, she benefited personally from similar programs that gave her exposure to the medical field and helped her make the decision to study medicine instead of computer science. 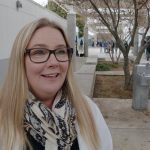 With such a small gap in age between the medical school students and the high schoolers, the older students “can relate really well,” Eichmann said. Tuesday’s visit was the fourth so far this year by the CHSU students, she said.

Her junior class, which meets for two hours each school day, has 34 students and is slightly larger than most, but Eichmann said the students are all committed to learning.

“I am over my cap, and I don’t mind keeping over the cap as long as I have good students who want to learn, who follow the rules, who do their homework, all those things, then I can handle an extra load,” she said. “And I want to give as many students an opportunity as I possibly can, within reason. And, you know, help students, help young people figure out what they want to do with their life.” 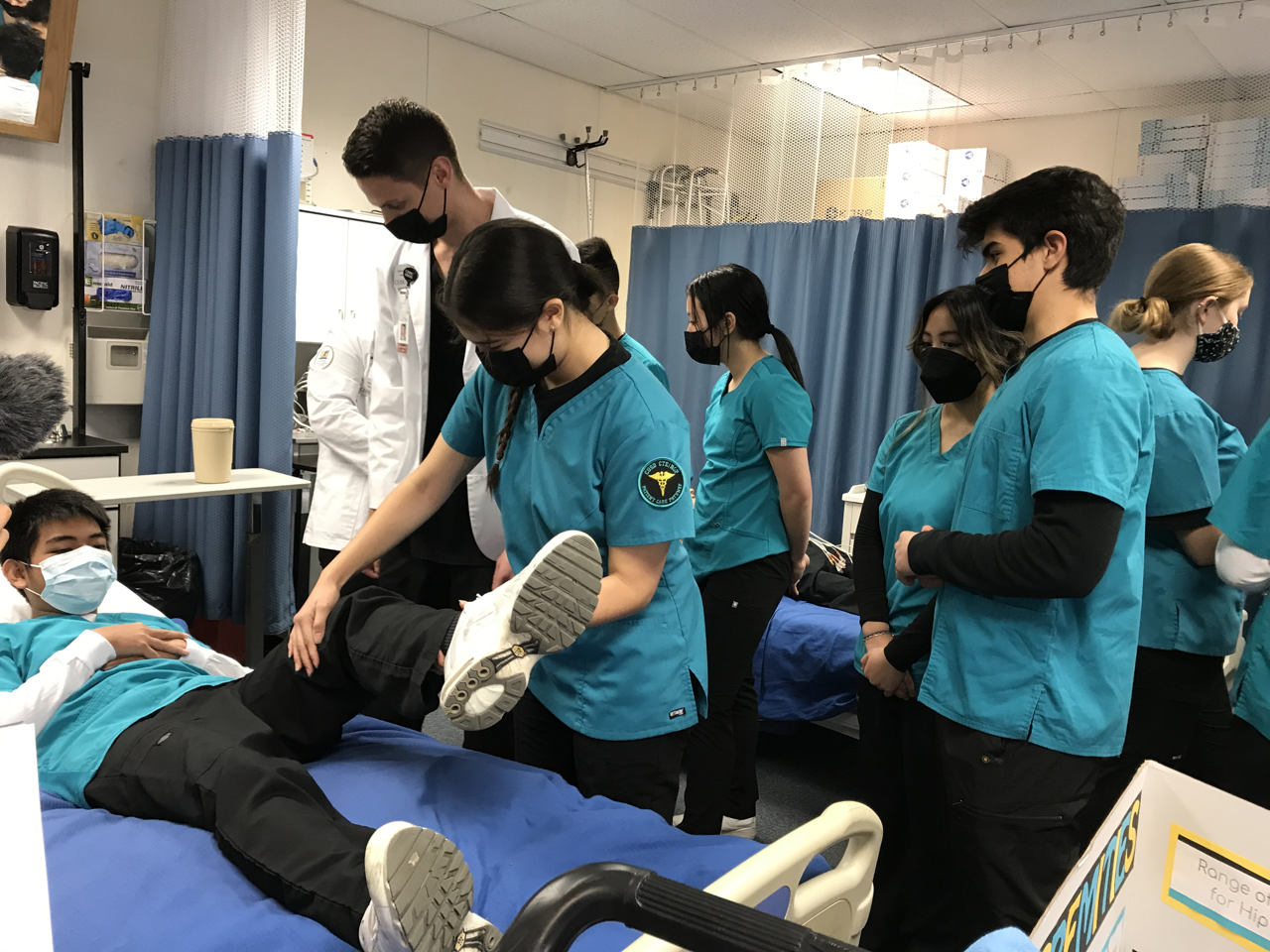