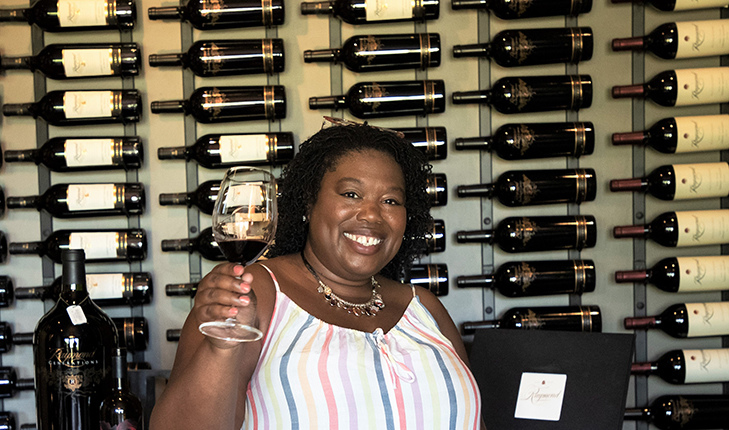 Dr. Monique Bell envisioned herself frolicking in the vineyards of California’s Black-owned wineries while conducting research in fall 2020, but the COVID-19 pandemic had her settle for Zoom calls instead.

Editor’s Note: This story is provided by Fresno State News

That unexpected change might have worked better for the newly-tenured Fresno State marketing professor who traveled virtually from Napa Valley to the vineyards of Germany and South Africa to study Black wine entrepreneurs and the business challenges they face.

“Not only did I see Black people consuming wine and enjoying it, but I got to meet Black owners of vineyards and wine brands,” Bell said. “It never connected for me that there are people who look like me, who owned vineyards, and who were importers and exporters, and so I was just fascinated, and I wanted to know everything I could about it.”

It is estimated that less than 1% of the 11,000 wineries in the United States are Black-owned, Bell said. Fewer than 2% of the 3,100 beverage professionals surveyed by SevenFifty, an online marketplace and communications platform that helps importers, producers, distributors, and retail buyers connect, identified as Black or African compared to 84% who identified as white or Caucasian.

After making tenure, Bell applied for a sabbatical to take on this new passion project. She surveyed more than 100 Black winemakers and professionals, and personally interviewed more than 40, over one semester. By the end of one year, she wrote and published “Terroir Noir: 2020 Study of Black Wine Entrepreneurs.”

Terroir is the natural environment in which wine is produced and includes soil, climate, and topography.

Her findings showed that some 43% of Black wine businesspeople said access to capital is their main roadblock in the business, while 20% said bias and/or racism was their biggest challenge. This past year proved to be both positive and negative for their businesses, she said. Black wine entrepreneurs saw increased attention and awareness for Black-owned businesses after the death of George Floyd and amid the racial injustice protests, Bell said.

“Having that awareness is very important. Consumers need to know that they have the power to support these brands and support these entrepreneurs, but also for young people to know there are career opportunities within this industry,” Bell said.

After Bell completed her research, she joined forces with media company and lifestyle brand Uncorked & Cultured to compile the Sip Consciously Directory, an online resource of Black-owned wine businesses. It houses over 100 Black-owned businesses — wine producers, distributors, and retailers — across the United States and Africa.

What surprised her the most during her research? Winery owners were responsive and helpful in the midst of a pandemic, while California was battling wildfires and as the country was electing a new president, she said. Bell joked that she also conducted the interviews at the worst time — fall, which is harvest season for wineries.

“I was thankful that people were sharing their stories,” Bell said. “It inspired me on a personal level. There’s such a beautiful industry and beautiful aspects to it that I want people [of color] to know they do have a place in it. People are going to welcome you if you show the desire to learn and your passion for it.”

After Bell completed her research, she joined forces with media company and lifestyle brand Uncorked & Cultured to compile the Sip Consciously Directory, an online resource of Black-owned wine businesses. It houses over 100 Black-owned businesses — wine producers, distributors, and retailers — across the United States and Africa.

Her research and efforts to help elevate awareness of Black-owned wine businesses earned her an unexpected nomination as social visionary of the year in Wine Enthusiast’s 22nd annual Wine Star Awards this past October.

Bell would like to do more consulting work in the wine industry as well as marketing to reach communities of color. Her goal is to open a wine bar that features underrepresented winemakers, including Black, Indigenous, LGBTQ+, and women. By engaging with the Fresno Metro Black Chamber of Commerce, Bell is a step closer to her dream and will graduate from its Betting Big on Black Businesses pilot cohort in January.

She has also connected with the Department of Viticulture and Enology at Fresno State to talk about ideas for increasing minority representation in the program, and she is working with the Lyles Center for Innovation and Entrepreneurship on a speaker’s event.

Throughout her wine journey, Bell has earned scholarships to continue her studies. She earned the Wine and Spirit Education Trust Level 1 Award and Asia Pacific Wine and Spirits Institute USA wines specialist certification. Additionally, Bell was awarded a Fuel Your Dreams grant by the Women of the Vines and Spirits Foundation that will allow her to take wine business courses.

Bell was a panelist at the Unified Wine and Grape Symposium in Sacramento on Jan. 25 to discuss sustainability as it relates to people, planet and profits.

But what about her wine palate? She admits that she isn’t a big wine drinker, even after all her research. Bell recently had her first taste of Prosecco and said she likes anything with bubbles. Albariño is good too, she said.

“Wine, as it always does, brings people together. It has allowed me to form new relationships outside of my siloed world,” Bell said.

“I just want to do everything that I can to amplify these stories so others are aware and [students are] not in their 30s, 40s, or 50s before they realize that this is an industry they can go into as a career.”