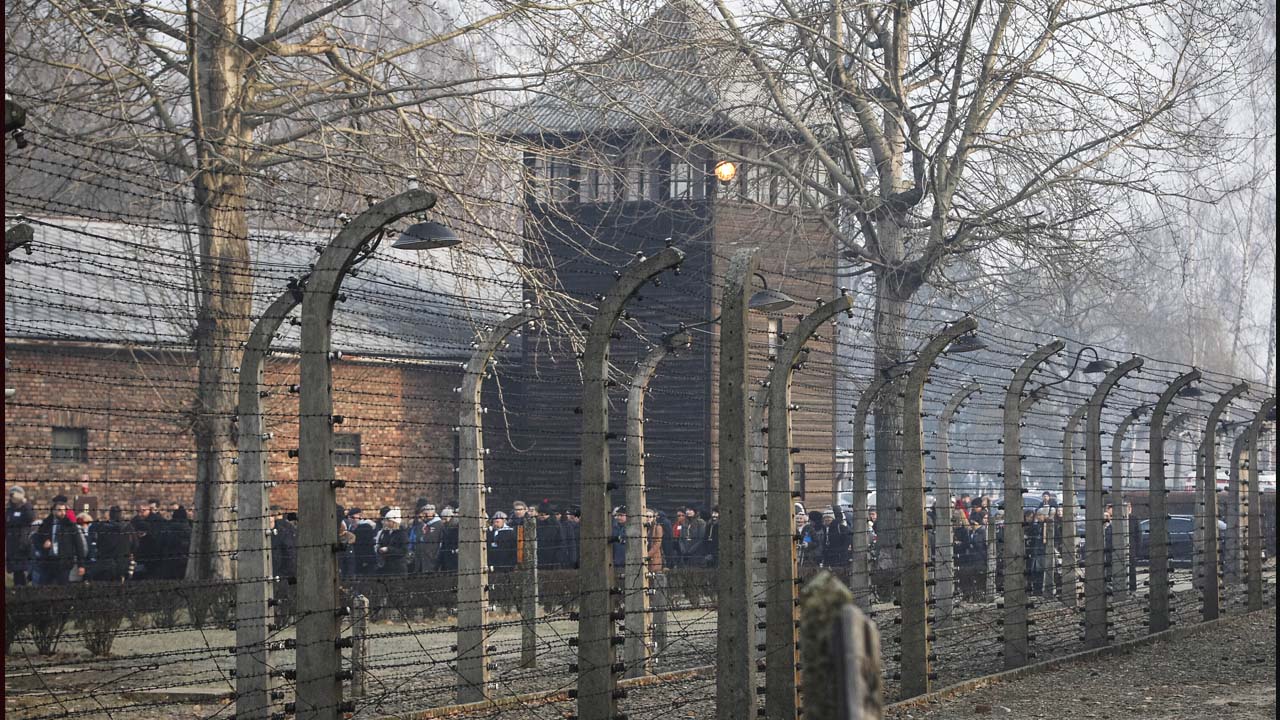 Nazi German forces killed 1.1 million people at Auschwitz, most of them Jews, but also Poles, Roma and others. (AP Photo/Czarek Sokolowski, File)
Share with friends

Survivors recalled their agony to a world they fear is forgetting, Israel’s parliamentary speaker wept in the German parliament and politicians warned of a resurgence of antisemitism on Thursday’s International Holocaust Remembrance Day.

The day falls on the anniversary of the liberation of Auschwitz-Birkenau, the most notorious of the death camps where Nazi Germany carried out its Final Solution seeking to murder the Jewish people of Europe.

At the memorial site in Poland, which was subjected to a brutal German occupation during World War II, a small number of survivors gathered in an auditorium. Attendance at the yearly event was sharply curtailed amid Europe’s coronavirus surge. Others joined online.

Nazi German forces killed 1.1 million people at Auschwitz, most of them Jews, but also Poles, Roma and others, and the site today stands as a powerful symbol of how hatred and indifference led to the Holocaust.

Halina Birenbaum, a 92-year-old Polish-born poet who lives in Israel, recalled her suffering remotely. She was 10 when the Germans invaded and occupied Poland in September 1939, and was 13 when she was taken to Auschwitz-Birkenau after being led out of the gas chamber of the Majdanek camp thanks to a malfunction.

“I saw masses of the powerful but arrogant army of Nazi Germany as they marched cruelly, victoriously, into the devastated and burning streets of Warsaw,” she recalled.

“The countless experiences of infinite suffering on the brink of death are already a distant, unimaginable story for new generations,” she said.

Commemorations Around the World

Commemorations everywhere took place amid a rise of antisemitism that gained traction during lockdowns as the coronavirus pandemic has exacerbated hatred online.

German parliament speaker Baerbel Bas noted that the coronavirus pandemic has acted “like an accelerant” to already burgeoning antisemitism.

“Antisemitism is here — it isn’t just on the extreme fringe, not just among the eternally incorrigible and a few antisemitic trolls on the net,” she said. “It is a problem of our society — all of society.”

In recent days alone, a 12-year-old Jewish boy in Italy was attacked and subjected to antisemitic slurs while two men were attacked in London.

“I have lived in New York for 75 years, but I still remember well the terrible time of horror and hatred,” survivor Inge Auerbacher, 87, told the German parliament. “Unfortunately, this cancer has reawakened and hatred of Jews is commonplace again in many countries in the world, including Germany.”

The U.N. General Assembly adopted a resolution in 2005 establishing International Holocaust Remembrance Day as an annual commemoration, and chose January 27 — the day Auschwitz-Birkenau was liberated by Soviet troops in 1945.

About 6 Million European Jews and Others Killed by Nazis

In all, about 6 million European Jews and millions of other people were killed by the Nazis and their collaborators during the Holocaust. Some 1.5 million were children.

“Our country bears a special responsibility — the genocide against the European Jews is a German crime,” Bas said in the German parliament, the Bundestag.

Israel’s parliamentary speaker, Mickey Levy, broke down in tears in the Bundestag while reciting the Jewish mourner’s prayer from a prayer book that belonged to a German Jewish boy who celebrated his bar mitzvah on the eve of Kristallnacht, an outburst of anti-Jewish violence in 1938.

Levy said that Israel and Germany experienced “an exceptional journey on the way to reconciliation and establishing relations and brave friendship between us.”

In Austria, Israeli Foreign Minister Yair Lapid paid an emotional visit to the Mauthausen concentration camp, where his grandfather, Bela Lampel, was murdered in 1945.

“Grandpa Bela, a quiet man whose family nickname was ‘Bela the Wise,’ sent me here today to say on his behalf, that the Jews have not surrendered,” Lapid said.

“The Nazis thought they were the future, and that Jews would be something you only find in a museum. Instead, the Jewish state is the future, and Mauthausen is a museum. Rest in peace, grandfather, you won,” he said.

He was joined by Austrian Chancellor Karl Nehammer. The two men hugged each other during the memorial service.

“I apologize, on behalf of the republic of Austria, for the crimes committed here. I apologize that your grandfather was murdered here,” Nehammer said.

Gathered at the European Parliament, EU lawmakers listened to 100-year-old Holocaust survivor Margot Friedlander’s ordeal. She was arrested in 1944 while on the run and brought to Theresienstadt, in what is now the Czech Republic. A year before, her mother and brother were deported to Auschwitz, where they were both killed.

“We must be vigilant and not look the other way as we did then,” she said. “Hatred, racism and antisemitism must not be the last word in history.”

Charles Michel, the head of the EU Council bringing together leaders of the 27 EU member countries, insisted on the importance of commemorating the Shoah as the number of survivors diminishes every year.

“With each passing year, the Shoah inches towards becoming a historical event,” Michel said. “More and more distant, more and more abstract. Especially in the eyes of the younger generations of Europeans. This is why, paradoxically, the more the years go by, the more important the commemoration becomes. The more essential.”

To tackle Holocaust denial, UNESCO and the World Jewish Congress launched a partnership Thursday with the online platform TikTok popular with youngsters. They say it will allow users to be oriented toward verified information when searching for terms related to the Shoah.

According to the U.N., 17% of content related to the Holocaust on TikTok either denied or distorted the Holocaust.

“All online platforms must take responsibility for the spread of hate speech by promoting reliable sources of information,” said UNESCO Director-General Audrey Azoulay.

In Italy, members of the Jewish community and lawmakers gathered in Rome’s Ghetto to lay a wreath where more than 1,000 people were rounded up and deported to Auschwitz on Oct. 16, 1943.

In Albania, Foreign Minister Olta Xhacka honored the millions of victims while taking pride in his country’s role in sheltering Jews.

Zakaria: Not Everything Is Going Putin’s Way on Ukraine