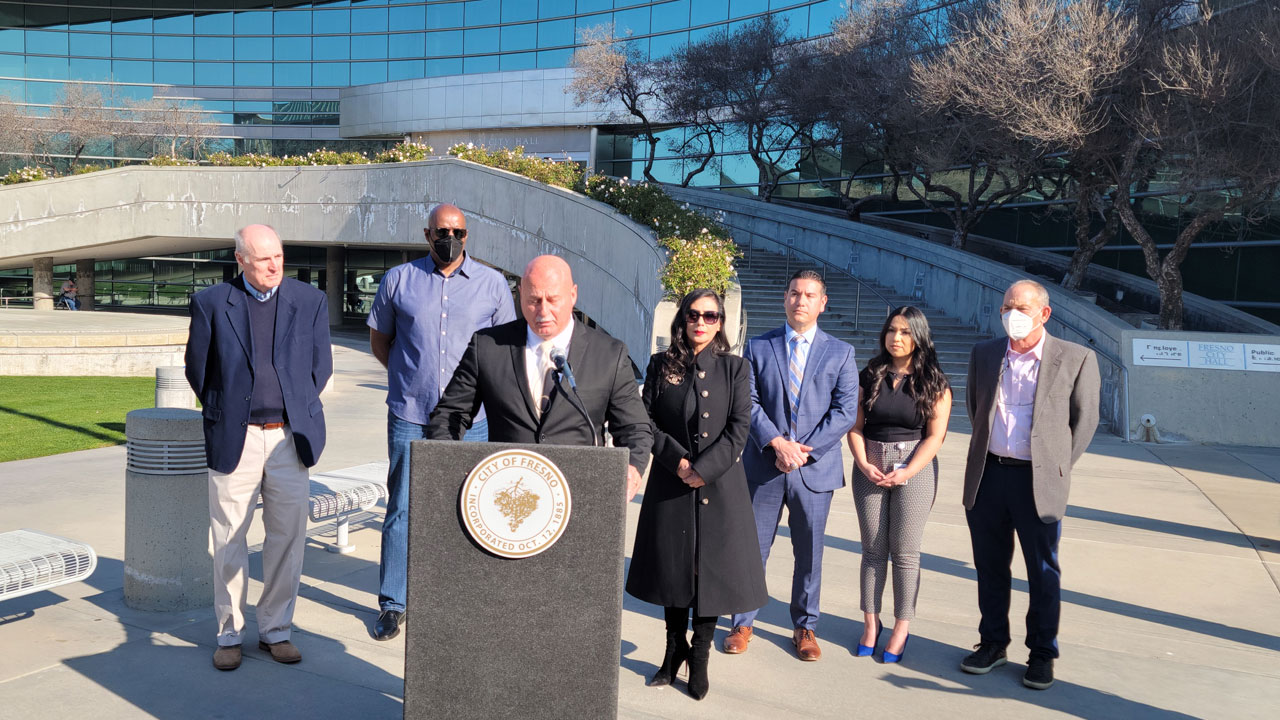 Armed with a letter from the state’s political watchdog clearing him of wrongdoing, Mayor Jerry Dyer turned a negative story published last week by The Fresno Bee into a showcase for his One Fresno Foundation’s efforts on behalf of disadvantaged youth.

Speaking at a Wednesday morning news conference, Dyer — without mentioning The Bee by name — criticized the story and pointed out that it was based on anonymous allegations made to the state Fair Political Practices Commission.

He characterized the motives of those behind the complaint as “purely political.”

After the news conference, the mayor’s press secretary handed out copies of the FPPC letter. “The Enforcement Division will not pursue this matter further,” stated the letter dated Jan. 25, 2022.

Flanked by foundation board members in front of City Hall, Dyer said, “We’re a good foundation. … and we’ve filled out all the records. Everything is available online and easy to access.”

The anonymous complaint focused on so-called behested payments. One example of a behested payment is a donation solicited by public officials on behalf of a nonprofit. The FPPC states that “officials must report the behested payments within 30 days of the date on which the payment meets or exceeds $5,000 from a single source. ”

Behested payments are common in California. Earlier this month, the Associated Press reported that “Gov. Gavin Newsom solicited donations totaling nearly $227 million from Facebook, Google, Blue Shield, and other private California companies and organizations to combat the coronavirus pandemic and help run parts of his administration (according to the FPPC).”

Where did that money go?

Much of the $27 million from Facebook went to gift cards for nursing home workers. In another example, Blue Shield of California gave $20 million for state homeless programs.

Donations to the One Fresno Foundation have been much more modest.

Dyer said that in 2021 the nonprofit took in about $210,000. Those contributions enabled 408 disadvantaged youth to attend Camp Fresno at Dinkey Creek and 9,000 youth and family members to visit the Fresno Chaffee Zoo, he said. The foundation also supported Dyer’s signature Beautify Fresno efforts.

Dyer said that he began formulating his vision for the nonprofit even before he decided to run for mayor.

“I wanted to bring together people who care about Fresno and who could help our youth, particularly our disadvantaged youth,” he said. “I wanted to give them a chance to experience things that they normally don’t get to have.

“Too often, youth get involved in the criminal justice system and we ask, ‘What happened?’ Our goal is to expose them to a different way of life.”

The mayor said that One Fresno would like to raise $1 million in 2022 and send more youngsters to Camp Fresno and the zoo.

In addition, he envisions awarding scholarships for high school graduates that would help pay for college or technical school. Another goal: expanding summer mentorship programs.

Some believe such contributions “are the devil’s work, and they’re clearly a loophole around contribution limits and people just give them to curry favor with elected officials,” Levinson said.

However, Levinson said that she belongs to the camp that believes money will inevitably flow through politics and would otherwise go to campaign accounts or independent expenditure committees.

“So if people are going to try and curry favor with elected officials, which they will, then let’s at least have that money go to a good cause,” she said.