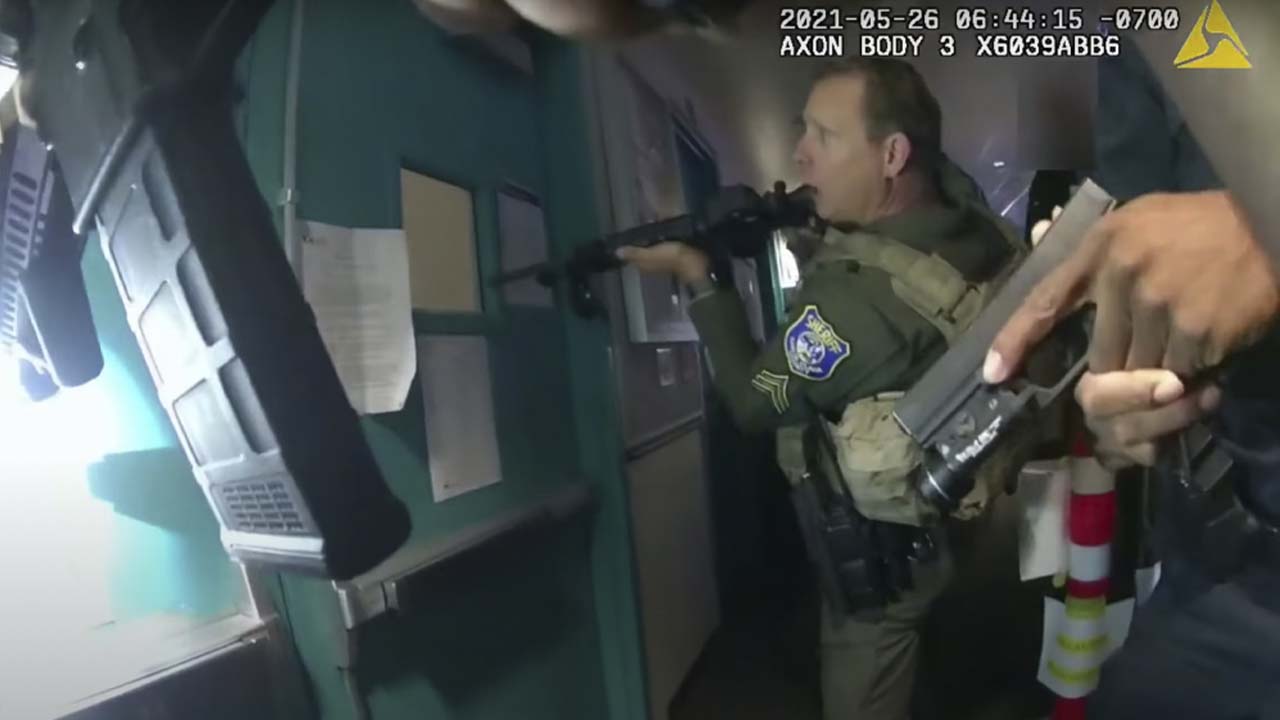 Deputies advance at a bus and rail yard in San Jose on May 26, 2021. A mass shooting there killed nine. (Santa Clara County SO via AP)
Share with friends

Gun owners would be required to carry liability insurance and pay a fee in the city of San Jose that officials say would be the first of its kind in the United States, following a trend of other Democratic-led cities that have sought to rein in violence through stricter rules.

The City Council is expected to vote on the plan Tuesday.

“San Jose has an opportunity to become a model for the rest of the nation to invest in proven strategies to reduce gun violence, domestic violence and suicide and the many other preventable harms from firearms in our communities,” San Jose Mayor Sam Liccardo said at a news conference Monday.

Other similar laws have been proposed but San Jose would be the first city in the country to pass one, according to Brady United, a national nonprofit that advocates against gun violence.

The proposed ordinance is part of a broad gun control plan that Liccardo announced following the May 26 mass shooting at the Santa Clara Valley Transportation Authority rail yard that left nine people dead, including the employee who opened fire on his colleagues then killed himself.

Having liability insurance would encourage people in the 5,500 households in San Jose who legally own at least one registered gun to have gun safes, install trigger locks and take gun safety classes, Liccardo said.

The liability insurance would cover losses or damages resulting from any negligent or accidental use of the firearm, including death, injury, or property damage, according to the ordinance. If a gun is stolen or lost, the owner of the firearm would be considered liable until the theft or loss is reported to authorities.

The requirement won’t apply to current and retired law enforcement officers or those with a license to carry concealed weapons.

The $25 fee will be collected by a yet-to-be-named nonprofit to be used for firearm safety education and training, suicide prevention, domestic violence, and mental health services.

Those who don’t insure their weapons would face unspecified fines.

Sam Paredes, executive director of Gun Owners of California, said his group will sue if the proposal takes effect, calling it “totally unconstitutional in any configuration.”

“We have freedom of religion, you can’t tax religion. We have freedom of association, we can gather together and we can’t be taxed,” he said. “The same is true with the Second Amendment. You can’t put preconditions on it.”

“The Second Amendment protects every citizen’s right to own and possess a gun. It does not mandate that taxpayers subsidize that right,” Liccardo said. He said some attorneys have already offered to defend the city pro bono.

What About Illegal Weapons?

However, the proposal does not address the massive problem of illegally obtained weapons that are stolen or purchased without background checks.

An increasing number of violent crimes nationwide are also being attributed to “ghost guns,” the untraceable firearms made from build-it-yourself kits that can be assembled in minutes.

In 2019, ghost guns were associated with a fraction of gun-related deaths in San Francisco but the following year, nearly 50% of guns recovered in homicide cases were ghost guns, San Francisco District Attorney Chesa Boudin said. In Los Angeles, the police department said the number of ghost guns it seized had increased by about 400% since 2017.

The San Jose Police Department could not say how many of the more than 200 gunfire deaths and injuries annually involved firearms obtained illegally.