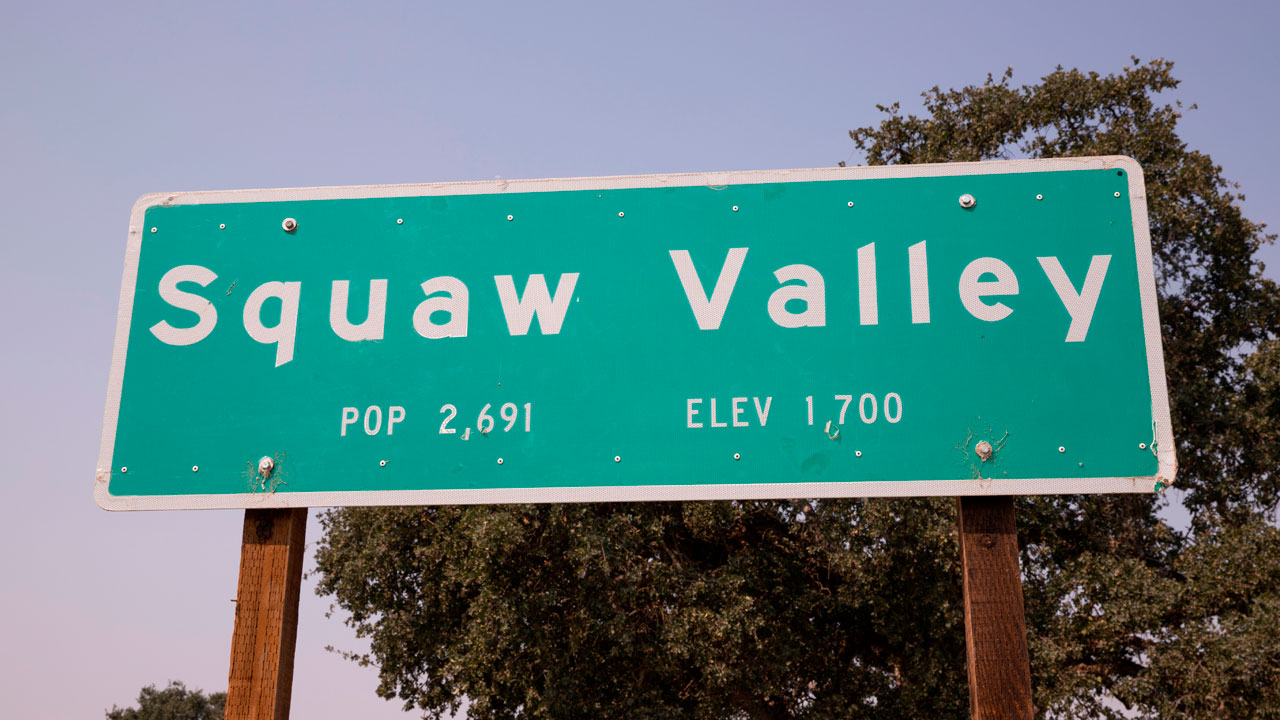 The Fresno County foothill town of Squaw Valley is embroiled in a debate over whether to change its name. (Shutterstock)
Share with friends

A battle is brewing in a small community about 30 miles east of Fresno on the Highway 180 gateway to Kings Canyon National Park.

Whether someone is passing through, heading home, or visiting the national park, a big green “Squaw Valley” sign greets all.

A petition by an indigenous man, Roman Rain Tree, seeks a new name for the Fresno County community. He says “squaw” is derogatory to indigenous women. And, a top Biden administration official, Interior Secretary Deb Haaland, concurs. She says that the name is racist.

However, many Squaw Valley residents like the name and don’t want it changed.

Billy Melton, a resident since 1995 says he’s never heard of the name being labeled as derogatory — even amongst the indigenous locals. 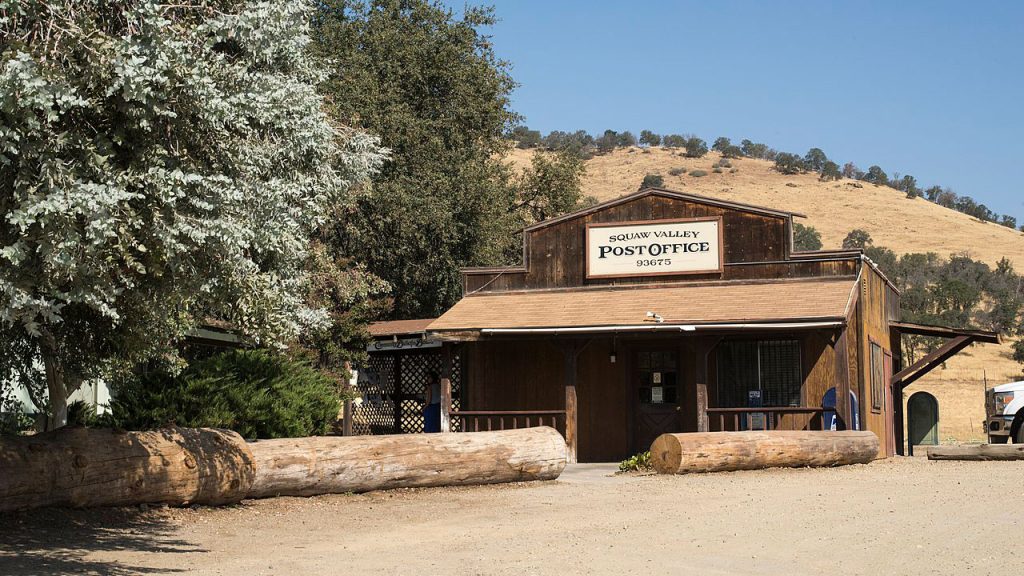 The historic post office in Squaw Valley along Highway 180. (Wikipedia)

A Petition To Change The Name

In 2020, Rain Tree proposed renaming the town to “Nuum Valley.” A petition on change.org backing the change has more than 35,000 signatures.

Since then, there have been heated discussions about the origins of Squaw Valley’s name, what it means to each individual, how much a change would cost, and who would pay for it.

Rain Tree, who lives a few miles west of the town of about 3,600 people, said he grew up in the area and spent summers with his mother and grandmother in nearby Dunlap.

“In 2013 I asked my mother if she thought our people, all the tribes in S-Valley, would ever gain federal acknowledgment while our ancestral homeland, the center of our universe, remain identified by a pejorative?” said Rain Tree. “She challenged me to demonstrate that the pen is mightier than the sword.”

Rain Tree identifies himself as Choinumni and is also a member of the Dunlap Band of Mono Indians, a neighboring tribe. After his mother died, he felt compelled to look for ways in which he could bring respect to the area.

He contacted the area’s county supervisor, Nathan Magsig, and then went on to propose a formal petition for action by the Fresno County Board of Supervisors.

Magsig responded by suggesting that Rain Tree needed to host a community meeting and offer the townspeople an opportunity to chime in.

Community meetings took place on Zoom, according to Melton. Other residents say they never heard about the online meetings because not everyone has access to the internet.

April Parker, who identifies as a Native American elder, says she is from the Seneca Nation of Indians in Buffalo, New York. She finds nothing offensive about the name Squaw Valley.

“I live in the town and spoke up at the meeting, but it was very one-sided,” said Parker. “We the people who live here and pay taxes and support our town are the only people who have any right to change the name.”

Shirley Guevara, who serves as the vice-chair for the Dunlap Band of Mono Indians, and her daughter, Taweah Garcia, who is also a tribal member, say they fully support Rain Tree’s effort.

“This is something that we have known all of our lives, that the word ‘squaw’ has a negative connotation to it,” said Garcia.

Morningstar Gali is the California tribal and community liaison for the International Indian Treaty Council and is also Guevara’s niece. Gali says some of those against a change say that ‘squaw” derives from an old Algonquin word used in respect to native women.

“As native women right here, we don’t actually feel that this term is respectful to us in any way,” said Gali.

Melton, however, says he has always thought of “squaw” as a respectful name for an indigenous woman. Meanwhile, Magsig says that a local tribe named the town 100 years ago.

“For whatever reason, nobody wants to look at the genesis of the name for this region,” said Magsig. “All they want to talk about is how that name is perceived today because the name has not always been steeped in controversy.”

How Was The Town Named?

An old newspaper article published by the Madera Tribune shows that the federal government recognized the town’s name as Squaw Valley in 1957.

The town wanted official recognition for the name because of concerns about confusion with the Lake Tahoe ski area that was set to host the 1960 Winter Olympics. That Squaw Valley recently changed its name to Palisades Tahoe.

The U.S. board of geographic names determined that its historic usage entitled the Fresno County community to have the area designated as Squaw Valley on all official maps and documents. 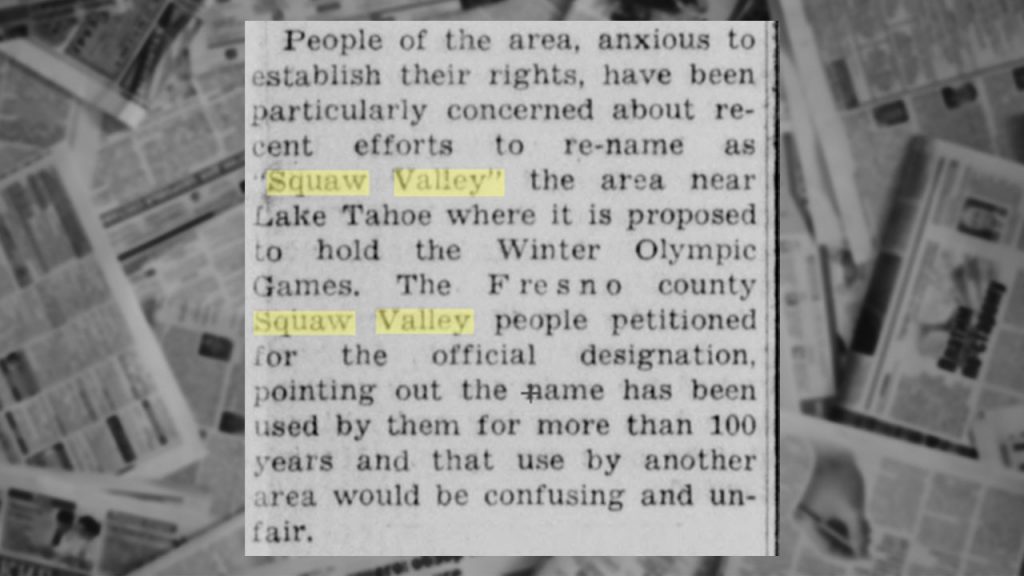 A Facebook account that holds an impressive collection of images and postcards from the central San Joaquin Valley shared a picture of the Squaw Valley store in a 2015 Facebook post. The post  claimed  that the image was taken in 1906 and the “area was inhabited by a large group of Indian women — hence the name.” 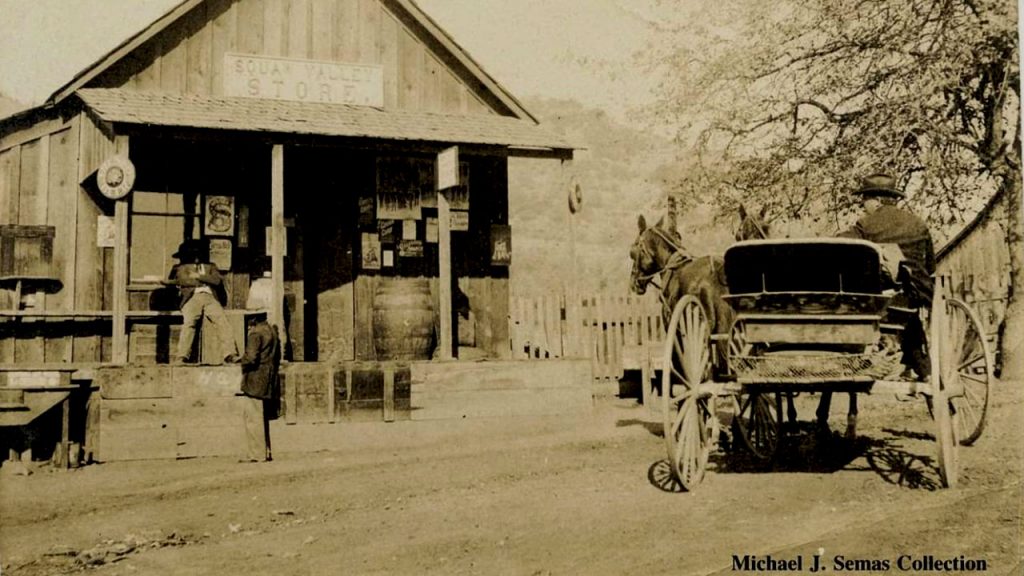 A photo of the Squaw Valley store taken circa 1906 (Michael J. Semas Collection)

How Have Local Tribes Responded To Renaming Efforts?

Ken Woodrow, a tribal chairperson of the Wuksachi Tribe-Eshom Valley Band, says indigenous people in the area have never liked the name.

According to Woodrow, the original name used by the closest indigenous tribe to the area before whites settled there was “Bear Valley.”

Rain Tree is now thinking of changing the name to “Yokuts Valley” or “Yokutch Valley.” Yokuts settled up and down the Valley, establishing 63 separate tribes, according to the Fresno County Historical Society. They were related by blood and language.

None of the tribes in the area today is federally recognized. Some of the tribes have not been vocal on the name issue because they fear it could affect gaining federal recognition, Rain Tree said.

“Every single tribal chair has told me they unequivocally support the removal, but only as a private resident not in the capacity for tribal leadership,” said Rain Tree. 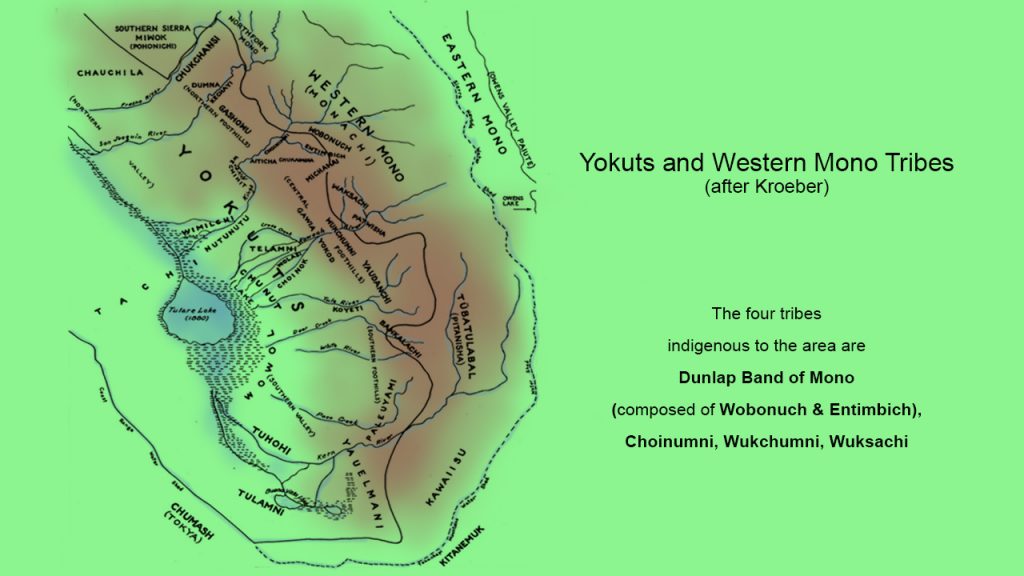 According to the U.S. Department of the Interior Indian Affairs most of today’s federally recognized tribes received that status through treaties, acts of Congress, presidential executive orders,  other federal administrative actions, or federal court decisions.

A report from the UCLA Indian’s Studies Center finds that more than 55 tribes in California are unrecognized by the federal government. 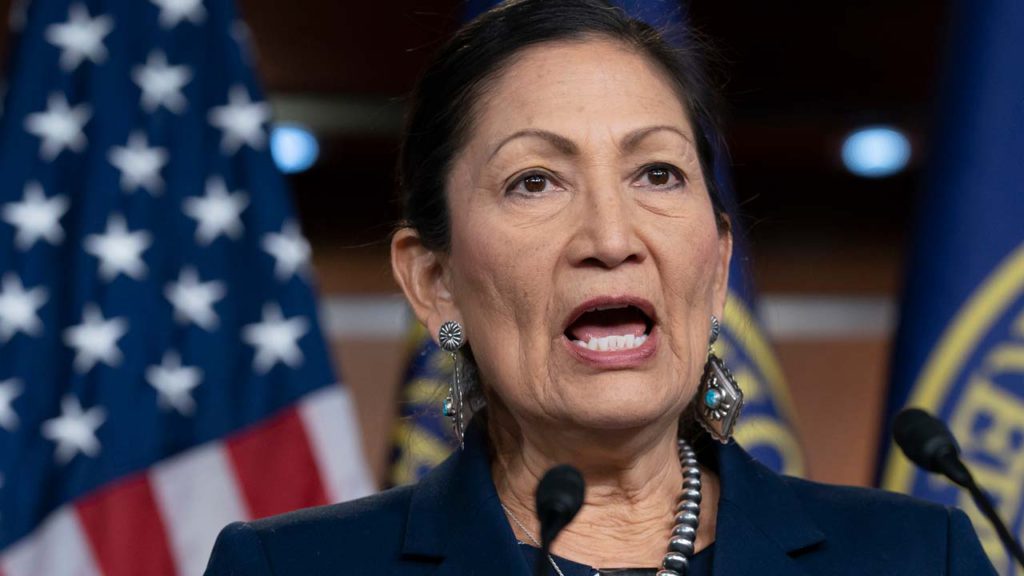 Interior Secretary Deb Haaland, a former House member, is the first Native American to lead the powerful federal agency that has wielded influence over the nation’s tribes for generations. (AP File)

A public community meeting to discuss the name change and costs is still being worked out between Rain Tree and Magsig.

In the end, the decision to rename the town could end up as a federal issue.

Woodrow says there also could be an Assembly bill coming to change the name.

In November 2021, Interior Secretary Deb Haaland formally declared “squaw” a derogatory term. Haaland, a member of the Pueblo of Laguna and a 35th generation New Mexican, is the first Native American to serve as a cabinet secretary.

Through a secretarial order, Haaland put together a federal task force to find replacement names for all valleys, lakes, creeks, and other sites on federal land bearing the name.

According to a database from the Board on Geographic Names, there are more than 650 federal land units that contain the word “squaw.”

“Racist terms have no place in our vernacular or on our federal lands. Our nation’s lands and waters should be places to celebrate the outdoors and our shared cultural heritage — not to perpetuate the legacies of oppression,” said Haaland.

Do Council Hopefuls Back ‘Bredefeld Rule’ Keeping Conservative Out of Leadership?