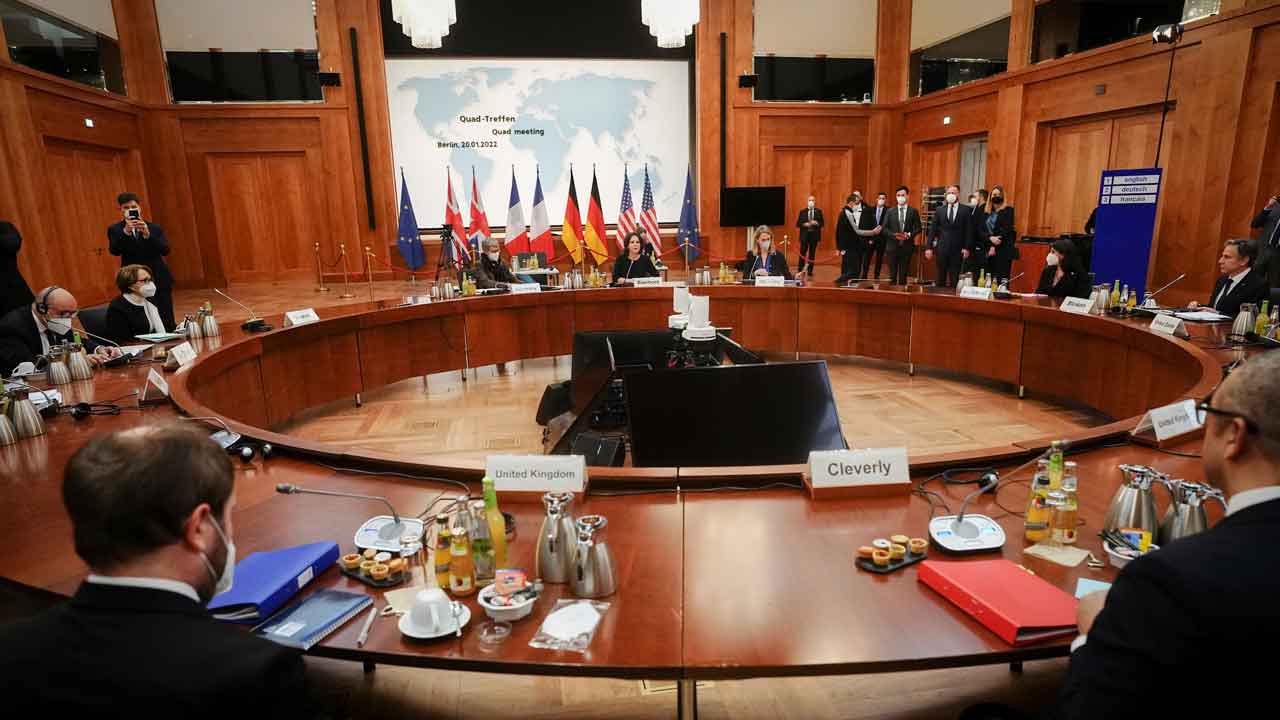 Top diplomats from the U.S., Britain, France and Germany met in Berlin to project a united front to Russia. (Kay Nietfeld/Pool via AP)
Share with friends

U.S. Secretary of State Antony Blinken warned Thursday that there would be a “swift, severe” response from the United States and its allies if Russia sends any military forces into Ukraine.

Blinken’s comments in Berlin appeared to be another effort to clear up any confusion about the position of the U.S. and its NATO allies after U.S. President Joe Biden was heavily criticized for saying a “minor incursion” by Russia would elicit a lesser response.

“If any Russian military forces move across the Ukrainian border and commit new acts of aggression against Ukraine, that will be met with a swift, severe, united response from the United States and our allies and partners,” Blinken told a news conference with his German counterpart.

Later, Blinken accused Russia of threatening the foundations of world order with its buildup of an estimated 100,000 troops near Ukraine’s border. He said Russia must face a concerted and severe global response if it invades.

The stark warning was delivered in Berlin, the formerly divided city that symbolized the Cold War split between East and West, as Blinken prepares to meet Friday in Geneva with Foreign Minister Sergey Lavrov in a high-stakes bid to ease tensions that appears likely to fail.

“These are difficult issues we are facing, and resolving them won’t happen quickly,” Blinken said. “I certainly don’t expect we’ll solve them in Geneva tomorrow.”

He said Russia’s actions toward Ukraine are an attempt to subvert international norms and just the latest in a string of Moscow’s violations of numerous treaties, agreements and other commitments it has made to respect the sovereignty and territory of other countries.

“To allow Russia to violate those principles with impunity would drag us all back to a much more dangerous and unstable time, when this continent -– and this city -– were split in two, separated by no-man’s-lands patrolled by soldiers, with the threat of all-out war hanging heavily over everyone’s lives,” Blinken told an audience at the Berlin-Brandenburg Academy of Sciences. “It would also send a message to others around the world that these principles are expendable.”

“We will not treat the principles of sovereignty or territorial integrity as negotiable,” he said, adding that the situation is “bigger than a conflict between two countries, and it’s bigger than a clash between Russia and NATO. It’s a crisis with global consequences. And it requires global attention and action.”

The speech came after Blinken and top diplomats from Britain, France and Germany met in Berlin to project a united front to Russia over concerns that it may be planning to invade Ukraine. A day earlier, he met Ukraine’s president in Kyiv to discuss the threat.

Biden said Wednesday that he thinks Moscow will invade and warned Russian President Vladimir Putin that his country would pay a “dear price” in lives lost and a possible cutoff from the global banking system if it does.

But, Biden also prompted consternation among allies after saying that the response to a Russian invasion “depends on what it does.” “It’s one thing if it’s a minor incursion and then we end up having a fight about what to do and not do, et cetera,” he said.

Biden added on Thursday that “Russia has a long history of using measures other than overt military action to carry out aggression — paramilitary tactics, so-called gray zone attacks and actions by Russian soldiers not wearing Russian uniforms.”

Blinken took pains Thursday to stress the U.S. and its partners were united, noting that American diplomats have held more than 100 meetings with allies in recent weeks “to ensure that we are speaking and acting together with one voice when it comes to Russia.”

“That unity gives us strength, a strength I might add that Russia does not and cannot match,” he said. “It’s why we build voluntary alliances and partnerships in the first place. It’s also why Russia recklessly seeks to divide us.”

Russia denies it is planning an invasion and, in turn, accused the West on Thursday of plotting “provocations” in Ukraine, citing the delivery of weapons to the country by British military transport planes in recent days.

Russian Foreign Ministry spokeswoman Maria Zakharova alleged that Ukrainian and Western talk of an imminent Russian attack was a “cover for staging large-scale provocations of their own, including those of military character.”

Russia wants binding security guarantees, including a permanent prohibition on Ukrainian membership in NATO, to which Kyiv aspires, and the removal of most of the U.S. and allied military presence in eastern Europe.

The U.S. and its European partners say they are willing to consider certain less-dramatic gestures but that the Russian demands are out of the question and that Putin knows they are nonstarters. That, Blinken said, is proof of Putin’s ulterior motive.

“So far, our good-faith gestures have been rebuffed -– because, in truth, this crisis is not primarily about weapons or military bases,” he said. “It’s about the sovereignty and self-determination of Ukraine and other post-Soviet states. And at its core, it’s about Russia’s rejection of a post-Cold War Europe that is whole and free.”

Amid concerns that Putin may not be moved by threats of sanctions and that an invasion will not draw as strong an international response as the U.S. believes is warranted, Blinken made a direct appeal to the Russian people to oppose any intervention.

“You deserve to live with security and dignity, like all people everywhere, and no one -– not Ukraine, not the United States, not the countries of NATO -– is seeking to jeopardize that. But what really risks your security is a pointless war with your neighbors in Ukraine, with all the costs that come with it -– most of all, for the young people who will risk or even give their lives to it,” he said.

The U.S. and its NATO allies face a difficult task on the Ukraine crisis. Biden has said he is not planning to send combat troops in the case of a further Russian invasion. But he could pursue a range of less-dramatic yet still risky military options, including supporting a post-invasion Ukrainian resistance.

The rationale for not directly joining a Russia-Ukraine war is simple. The U.S. has no treaty obligation to Ukraine, and war with Russia would be an enormous gamble. But doing too little has risks, too.