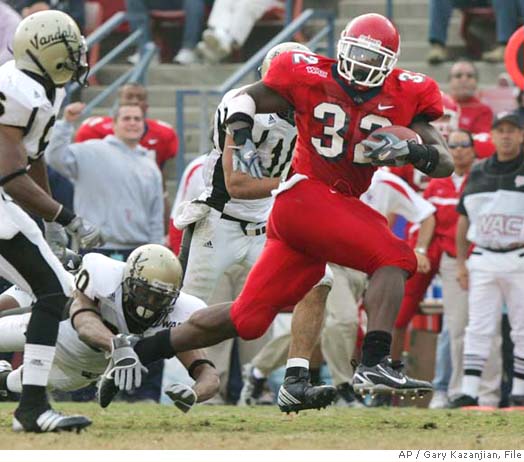 Dwayne Wright, who rushed for 1,462 yards and 11 TDs at Fresno State in 2006, is the new head football coach at Roosevelt High. (AP File)
Share with friends

Wright, 38, has been an assistant in the Rough Riders program. He is also a paraeducator at the school working with high-need students.

As a minister at Amazing Grace ministries, he often speaks to youth groups.

Formerly a counselor at Williams Elementary School, Wright told KSEE-24 in 2018 about the importance of connecting with students.

“The NFL was great, but that was just a step for me getting into education and helping students in Fresno and all over California,” Wright said at that time.

Watch: Dwayne Wright’s Mission Is to Serve Students, Be a Role Model

“Coach Wright has a high level of energy and drive, and a strong ethical fiber that aligns with our vision for the program. He will be the kind of leader and mentor that will help our student-athletes thrive. We are excited for a new chapter of Rough Rider football under Coach Wright,” said Principal Michael Allen in a Fresno Unified news release.

Roosevelt finished this season with a 6-5 record and 2-2 in the North Yosemite League. The Rough Riders defeated Tehachapi 41-20 in the playoffs before exiting with a 42-14 loss to Independence High of Bakersfield.

Wright twice eclipsed 1,000 yards rushing in a season for Fresno State and was a fourth-round draft pick of the Buffalo Bills in 2007.

Heng Enters House Race Even as the Lines Keep Changing