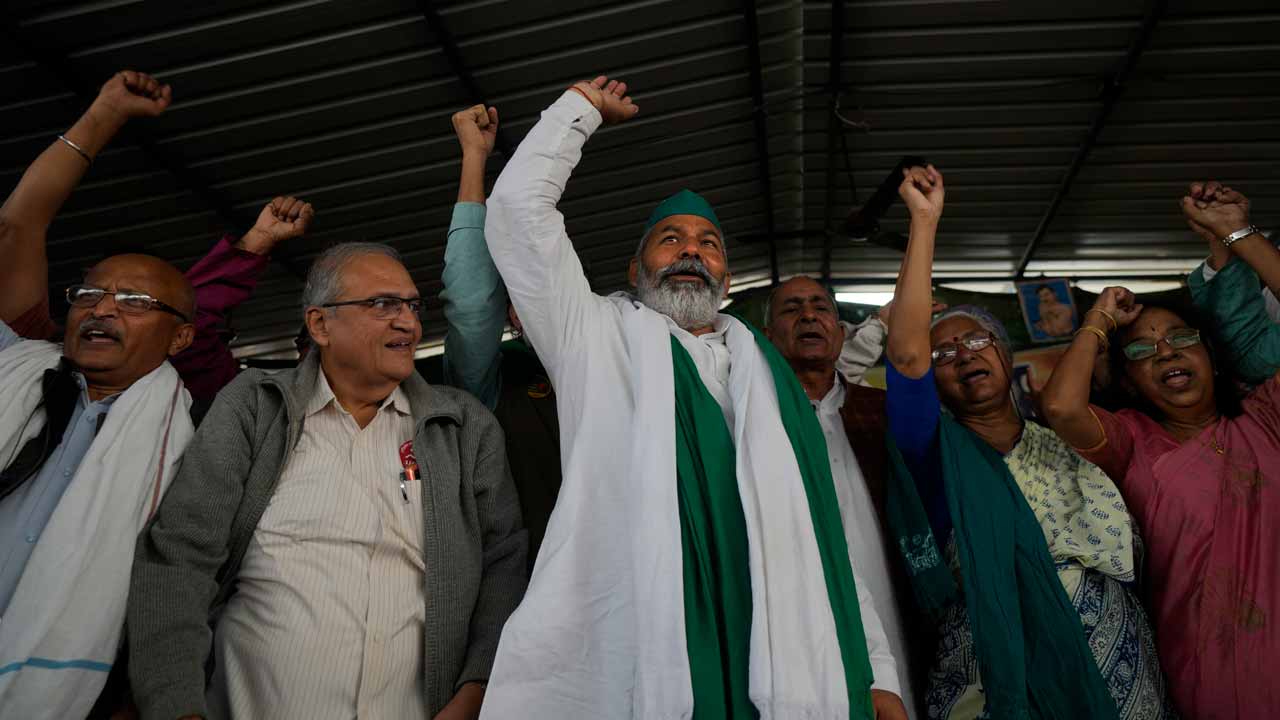 Farmer leaders protest during a rally at on the outskirts of New Delhi, India on Friday. (AP Photo/Manish Swarup)
Share with friends

NEW DELHI — Thousands of jubilant Indian farmers waved green and white flags on Friday as they celebrated victory in forcing Prime Minister Narendra Modi to withdraw three agriculture laws the farmers feared would drastically reduce their incomes and leave them at the mercy of corporations.

Using tractors, jeeps and cars, farmers from New Delhi’s neighboring states began a year-long protest last November on the highways on the outskirts of the capital, braving a harsh winter, a scorching summer and a devastating coronavirus surge.

The three laws were aimed at deregulating India’s agriculture sector. They would have eliminated government oversight of crop sales and allowed for direct negotiations between corporations and farmers. Modi’s government described the policy changes as much-needed free market reforms. But many farmers feared they would affect their their already meager incomes to the benefit of big businesses.

Farmer groups say they will continue to camp out as parliament begins a new session this week.

Rakesh Tikait, a top farmer leader, said they want government assurances of guaranteed prices for certain essential crops, like wheat and rice — a system introduced in the 1960s to help India shore up its food reserves and prevent shortages. He demanded that the government set up a committee to settle their demand.

“We are not going away until our other demands are met,” he said. There was no immediate response by the government.

Lal Kumar, a 42-year-old farmer, said “Modi has accepted defeat.” With his low farm income, Kumar said he was not able to look after his family properly.

Farmers worried that the now-withdrawn laws would have left them at the mercy of corporations that would have no legal obligation to pay them guaranteed prices.

For Modi’s government, the demonstrations were its biggest challenge yet. Experts say key state elections in February-March could be a major reason behind Modi’s reversal.

Farmers form the most influential voting bloc in India and politicians have long considered it unwise to alienate them.

Elections next year will cover Uttar Pradesh, India’s largest and most populated, Uttarakhand and Punjab states, where Modi’s party hopes to win them back or shore up its rule. The three states have a sizeable farmer population, particularly Punjab.

Modi’s Bharatiya Janati Party is in charge in Uttar Pradesh but is under immense pressure over its response to the pandemic and the struggling economy. If farmers desert his party, it will not only shrink its prospects to form the state government for a second term but also weaken its chances to get an overwhelming majority in 2024 national elections.

Dozens of Farmers Died During Protest

Over the past year, dozens of farmers died due to suicide, bad weather and COVID-19 during the demonstrations, which drew international support.

The protest has been largely peaceful. However, violence erupted on Jan. 26 when thousands of farmers stormed New Delhi’s historic Red Fort and briefly took over it over and hoisted a Sikh religious flag. Most are members of the Sikh minority.

At least one protester died, and several were injured, as were more than 390 police officers.