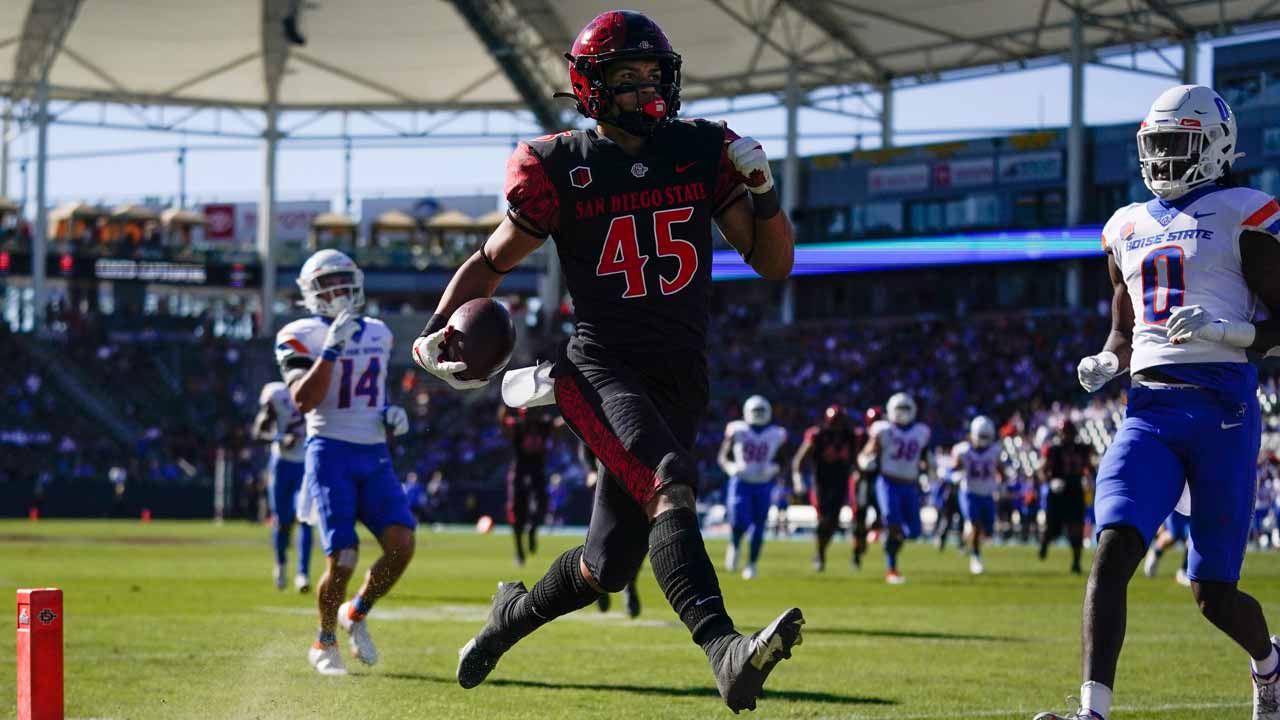 San Diego State wide receiver Jesse Matthews (45) runs to the end zone for a touchdown during the first half against Boise State in Carson on Friday. (AP Photo/Ashley Landis)
Share with friends

CARSON — Jordon Brookshire led No. 22 San Diego State to 24 unanswered points after replacing Lucas Johnson late in the first half, and the Aztecs claimed the Mountain West’s West Division title with a 27-16 victory over Boise State on Friday.

Brookshire passed for 192 yards and a touchdown and rushed for 46 yards and another score for the Aztecs (11-1, 7-1), who celebrated at their temporary home in the Los Angeles suburbs after completing their first 11-win regular season in 99 years of football.

The Aztecs, who have never had a 12-win season, will host the Mountain West title game next Saturday, Dec. 4, against Air Force or Utah State.

Fresno State saw its conference championship hopes dashed with the San Diego State victory. The Bulldogs needed a Broncos win in order to advance and play for the MWC title.

San Diego State erased an early 13-point deficit with a bounce-back effort from its vaunted defense, which shut out the Broncos (7-5, 5-3) over the final 38 minutes.

Brookshire also transformed the struggling San Diego State offense when he took over on the penultimate drive of the first half. On their next four drives, the Aztecs turned a 13-point deficit into an 11-point lead.

Kurt Rafdal and Khalil Shakir caught early TD passes from Hank Bachmeier for the Broncos, whose four-game winning streak ended. Boise State has its first five-loss season since 2013 under first-year head coach Andy Avalos, a native of nearby Corona, California.

Patrick McMorris made two of the Aztecs’ three interceptions, and Jonah Tavai got three of their four sacks while the defense harassed and hit Bachmeier throughout the second half, forcing backup Jack Sears to play the final two series.

Brookshire began the season as the Aztecs’ starting quarterback, but Johnson took over after two games when Brookshire injured his foot. Brookshire returned and struggled through two more starts before Johnson reassumed the starting job for the next six games, with Brookshire bumped to the third string behind freshman Will Haskell.

Johnson was 9 of 20 for 98 yards when Brookshire relieved him and immediately led the Aztecs 78 yards for their first TD on Matthews’ 29-yard catch-and-run. Brookshire strung together another quick drive ending with Matt Araiza’s 37-yard field goal 3 seconds before halftime.

The Aztecs went ahead 20-16 to open the second half on a 75-yard drive that included a third-and-11 conversion and two fourth-down conversions, including Bell’s 2-yard TD run. McMorris’ second interception then led to a drive ending in Brookshire’s 16-yard TD run through the heart of Boise State’s defense.

Boise State: A team that scored 128 points in its last four games got off to a strong start against the conference’s best defense, but couldn’t sustain it. The Broncos aren’t alone in struggling against the Aztecs’ heavy hitters, but it’s a regular season-ending disappointment after an encouraging stretch under Avalos.

San Diego State: The Aztecs earned one more game at Dignity Health Sports Park, located 116 miles northwest of their campus. San Diego State has spent the last two seasons playing on the LA Galaxy’s home field while the $310 million Aztec Stadium is being constructed for a 2022 opening on the site of the demolished Jack Murphy Stadium in San Diego’s Mission Valley. The Aztecs are 9-2 in Carson, including 6-1 this year.