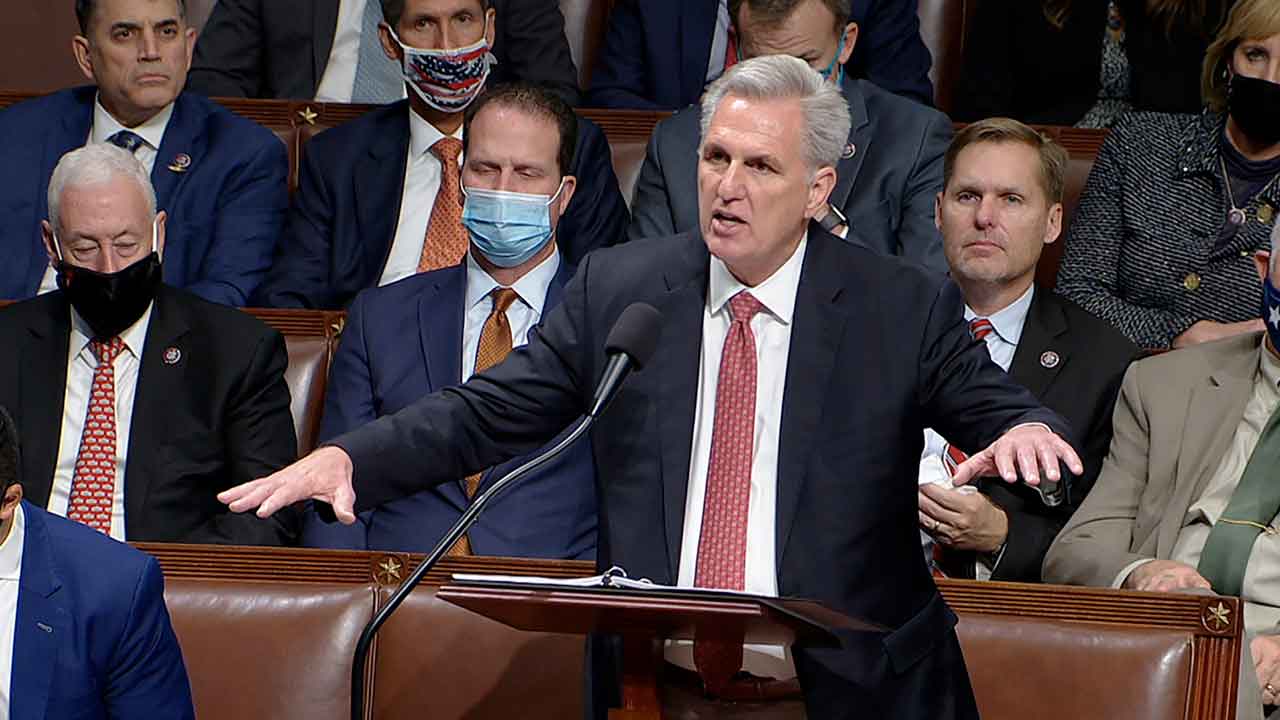 In this image from House Television, House Minority Leader Kevin McCarthy of Bakersfield speaks on the House floor during debate on the Democrats' expansive social and environment bill. (House Television via AP)
Share with friends

Sneering with disdain one minute, spilling sarcasm the next, McCarthy carried on for more than eight hours as Thursday night became Friday morning. He spewed a tirade of grievances that reached far beyond Biden’s legislative package, morphing into a monologue of complaints over what’s wrong with the country and the Democrats who control Washington.

Far from the “happy conservative” he claimed to be, the California Republican debuted a new role: angry heir to the Donald Trump legacy, picking up where the former president left off, mercilessly attacking his political opponents and their ideas with a ferocity that is rare even for the divided halls of Congress. The speech was a fact-checker’s bonanza.

“If I sound angry, I am,” he said as the speech began.

“I’m just getting geared up, go just sit,” he said several hours later. At another point, he said, “I know you don’t like me, but that’s OK.”

The drawn-out speech provided a politically pained capstone to an extremely tense week in what has been one of the more divisive and dangerous years in Congress.

Monday started with celebration, a rare bipartisan achievement, as Biden signed the related $1 trillion infrastructure bill into law. By midweek the House censured one of its own, Rep. Paul Gosar, R-Ariz., for posting a graphic video depicting violence against fellow elected officials. And as Friday began, McCarthy was deep into his stemwinder, shutting down business as usual.

Overheated rhetoric is nothing new in politics, but the post-Trump era has set the bar for a troubling new normal, a climate that has allowed fiery speeches to quickly devolve into more dangerous terrain — like the former president’s own rally cry that sparked the Jan. 6 insurrection at the Capitol trying to overturn Biden’s election victory.

McCarthy’s speech began as almost any other during the final debate on Biden’s bill. Democrats were laboring to wrap up work on the package of social services and climate change programs, shelving their own differences to deliver on the president’s domestic priorities.

Typically, floor speeches last one minute during the debate, but McCarthy used the prerogative granted party leaders to speak as long as they wish. As the minutes stretched to hours it was clear McCarthy’s speech was becoming something else — a moment.

He tore into Biden’s package as reckless overspending, chided Speaker Nancy Pelosi’s running of the House and swerved from topic to topic — inflation, immigration, the threat of a rising China, his childhood in California, the Lincoln presidency, the Jim Crow era, even the influence of the movie “Red Dawn” on his politics — all while stabbing the air, scowling across the aisle, his voice cracking at times.

McCarthy called on a few Democrats to join the Republicans in opposing Biden’s package, trying to deny the party the votes it will need for passage. There appeared to be no takers.

Dozens of Republicans, some sitting directly behind McCarthy, urged him on. Democrats on the other side booed, and some tweeted snickering replies.

“Loved it,” said Rep. Greg Pence, R-Ind., the brother of former Vice President Mike Pence. “This is a historical moment for Kevin, for sure.”

Tweeted Rep. Adam Schiff, D-Calif., the Intelligence Committee chairman: “If you took the worst orator in the world/Gave him the worst speech in the world/And made him read it for the longest time in the world/That would be a lot like listening to Kevin McCarthy tonight. Except, probably better.”

It’s no secret Democrats are facing a potentially tough midterm election next fall that has put their slim majority at risk. If Republicans take control, McCarthy is in line to become speaker, a job he tried, and failed, to attain before, only to bow out when it was clear he would not have the support of his Republican peers.

McCarthy’s overnight performance could be seen as an audition of sorts, an appeal to the Republican colleagues who denied him the job last time.

It could also be seen as a performance for another audience — of one. Earlier Thursday, McCarthy said he had received a phone call from Trump, who was playing golf but had dialed him up. McCarthy would not disclose what was said, just that they talked.

Theirs has been a rocky relationship at times, even though McCarthy had been among the first in Congress to support Trump’s 2016 campaign and enjoyed special status from the former president as “My Kevin.”

Republicans in the House have stayed close to the former president, emulating his style. The House Republican campaign committee recently held a fundraiser with Trump, and the party has determined that his support will be vital if they hope to win back control of Congress.

Unlike the Senate, which is known for its lengthy filibuster-style speeches, such addresses in the House are rare. Pelosi had held a modern-day record, having dug in with her own eight-hour floor speech in 2018 in support of immigration law changes, reading heartfelt letters from immigrants, some seeking protection from deportation.

The House returned after dawn Friday, passing the Biden package and sending it to the Senate.

Democratic Rep. Sheila Jackson Lee of Texas, who is part of the vote-counting whip team, said it did not appear that McCarthy’s speech changed any support for Biden’s bill on her side of the aisle.

“I think Kevin is also trying to show his conference that he’s a tough guy,” said Jackson Lee. “And he has the right to do that. And when I was in there, I showed him the respect that a person on the floor deserves. But, frankly, there are desperate people in my district who need every single aspect of this bill.”