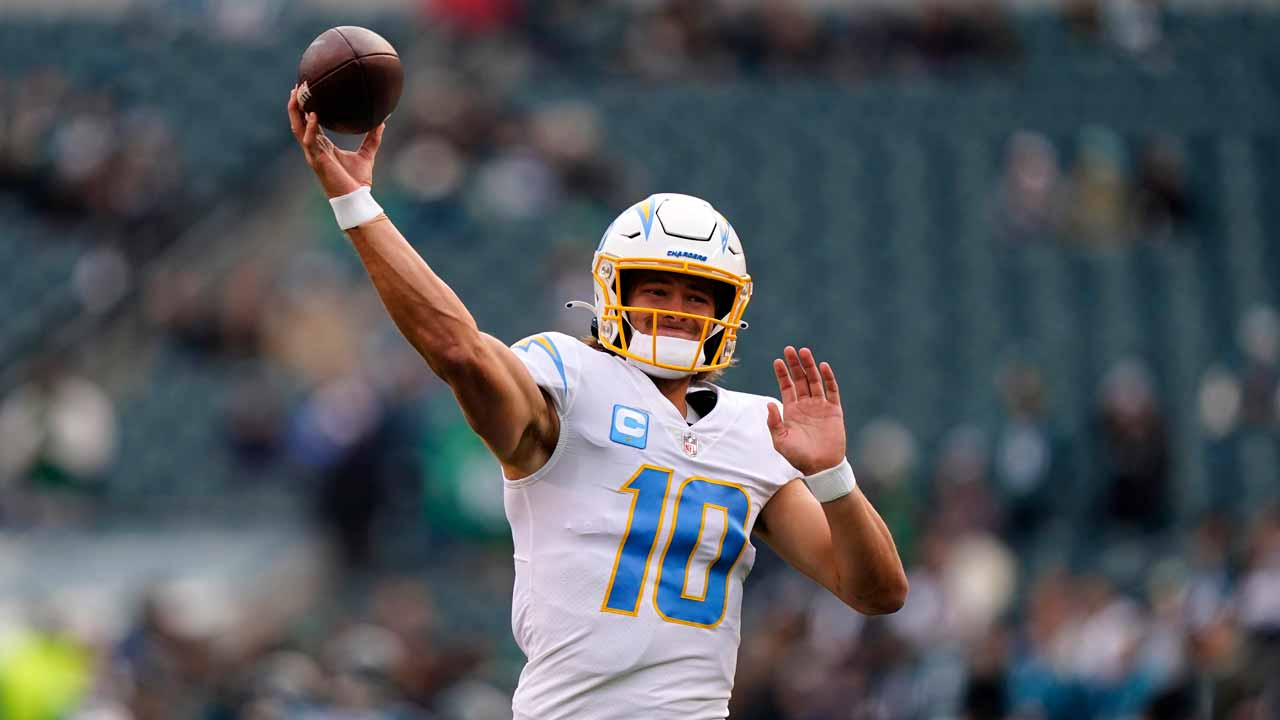 David Carr says that the Los Angeles Chargers must entrust Justin Herbert to make the right calls at the line of scrimmage. (AP File)
Share with friends

Justin Herbert, the gifted second-year quarterback of the Los Angeles Chargers, has all the tools to become a difference-maker for years to come.

However, the Chargers have lost three of their last four games — beating only Philadelphia — and no longer look like the same offense that put up 47 points against Cleveland in a come-from-behind victory.

So, what has happened to the Chargers after their promising 4-1 start?

According to first-year coach Brandon Staley, the opposition is taking away the deep part of the field — similar to what defenses have done to Kansas City’s Pat Mahomes this season.

But something even bigger is bogging down the Chargers. Baltimore, New England, and Minnesota all pressured Herbert in third-down situations and in the red zone. That’s where NFL games are won or lost, and the Chargers are coming up short.

Instead of the center calling out the quarterback protection schemes on critical downs, Herbert — who has a much better view of the field — should make the calls.

If the Chargers want to make noise in the AFC, they have to take the training wheels off Herbert. He’s had enough experience to emulate what the league’s best QBs do at the line of scrimmage. Sunday night’s home game against Pittsburgh is the perfect time to start.

What’s Wrong With the Rams?

It’s hard to believe that a team with Aaron Donald could be labeled “soft,” but that’s exactly what the Rams are.

San Francisco’s 31-10 pounding of the Rams followed a 28-16 loss to a Tennessee team that is of the most physical in the NFL despite the loss of Derrick Henry.

Coach Sean McVay says that this week’s bye gives the 7-3 Rams time to fix what’s wrong. I’m not convinced of that because the Rams don’t have the defensive personnel — aside from Donald — to stand their ground at the point of attack.

What’s more, ball control is the right tactic for opponents to keep the high-powered Rams offense off the field and to negate the pass rush of newly acquired Von Miller.

For Los Angeles to get back on track, McVay must go back to what took the Rams to the Super Bowl a couple of seasons back. Re-establish the Rams’ running game for a ball-control element of his own. At this point, that’s the best way of protecting the Rams’ defense. 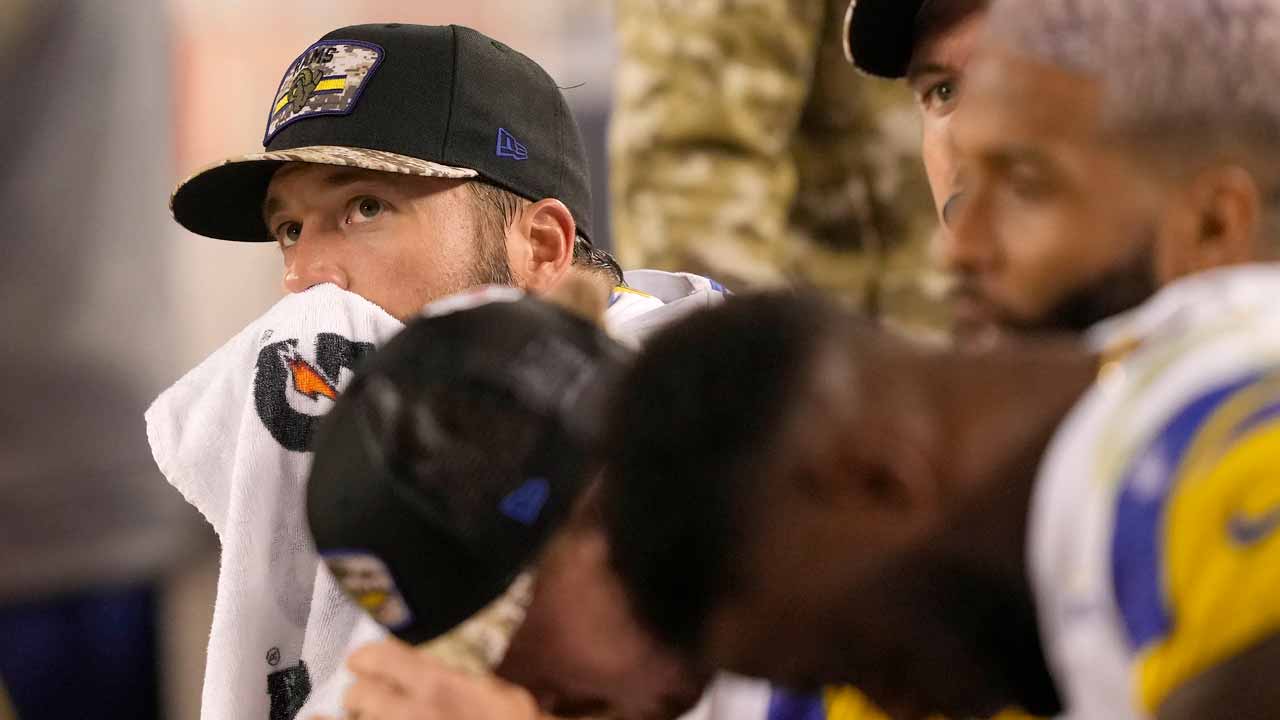 The Los Angeles Rams have lost two straight, and it’s apparent that they have trouble against the NFL’s more physical teams. (AP File)

Patriots Are the Real Deal

“The @Patriots guaranteed $163 million in free agency and people rolled their eyes. Those add-ons have been worth every penny. They, then, nailed the draft with three huge pieces in Jones, Barmore, and Stevenson. Teams spend decades re-building. It took NE a year.” — @PSchrags pic.twitter.com/gPqRNM4Rcu

Jones is throwing the ball with perfect anticipation, which is the key to connecting with closely covered receivers.

In the 45-7 win over Cleveland, the Patriots put everything on the plate for Jones. Even though he’s a rookie, he aced the test.

With the Patriots back to what has brought them so much success — multiple tight end formations, savvy QB play, and tough defense — New England is very much in contention to win the AFC.

It’s clear that Baker Mayfield is a competent quarterback, but not someone who can elevate Cleveland in the face of big challenges.

Cleveland has built its team around a dominant running game and the hope that the defense will realize its considerable potential.

Thus, it makes no sense to reward Mayfield with the break-the-bank contract he’s hoping for. He reminds me a lot of Jared Goff, who couldn’t hit the big plays in the passing game for the Rams. Now, Goff is in Detroit. 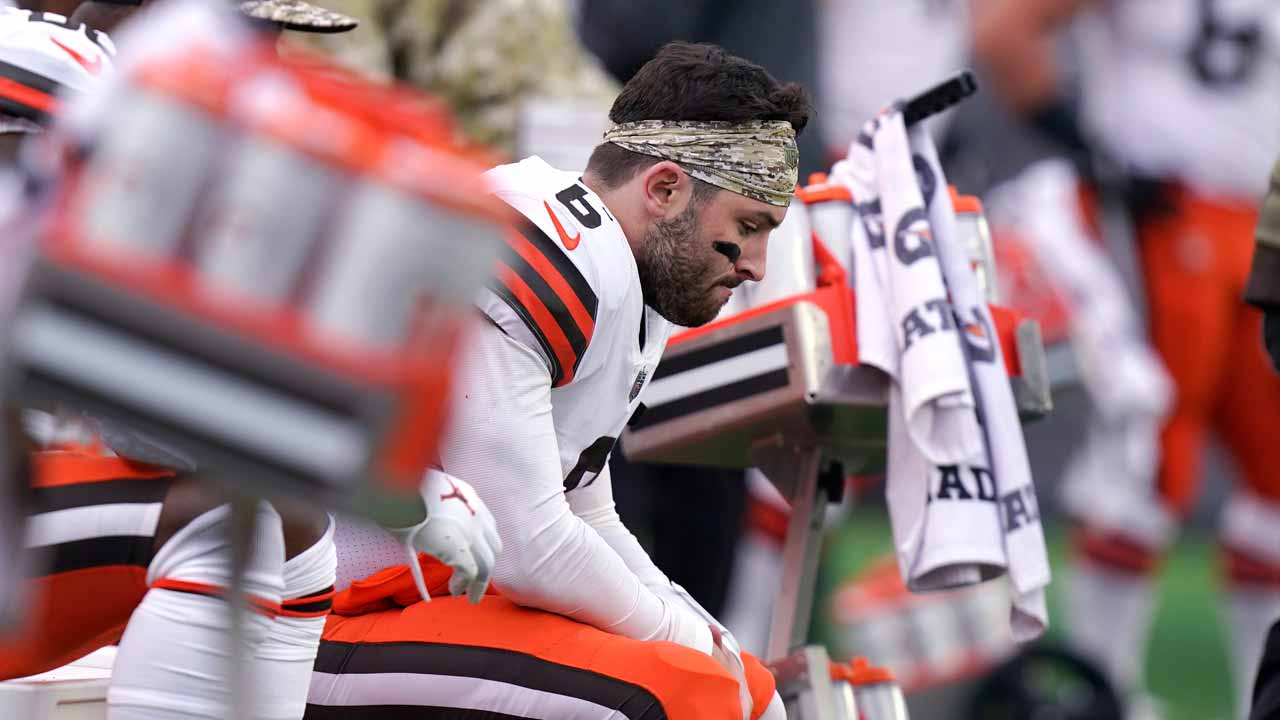 Cleveland QB Baker Mayfield is competent, but not a passer who can carry his team in tough times, writes David Carr. (AP File)

A Move the Ravens Must Regret

It’s already been a season of highs and lows for the 6-3 Baltimore Ravens, who inexplicably put up just 10 points in losing at Miami.

Perhaps the one constant: wishing they still had linebacker Matthew Judon. With the Patriots, he’s wreaking havoc and has 9.5 sacks already.

Instead of re-signing Judon, who at 29 is in his prime, the Ravens let him test the free-agent market after two straight Pro Bowl seasons.

The Patriots swooped in with a four-year, $56 million offer, and have allowed the second-fewest points in the AFC.

1. Dallas (7-2) — After sleep-walking through an upset loss at Denver, the Cowboys had their eyes wide open and pounded Atlanta.  We’ll see if they are worthy of the top spot Sunday at Kansas City. (Last week: No. 1)

2. Tennessee (8-2) — The Titans have won six in a row, and that’s a tribute to coach Mike Vrabel. Not only do the Titans have a solid roster, but they also have an identity. Their situation reminds me of what we had when I played for the New York Giants under Tom Coughlin. (Last week: unranked)

3. Arizona (8-2) — Getting blown out by Carolina was about two things: The return of Christian McCaffrey to the Panthers and Kyler Murray being on the Cardinals’ sidelines. My confidence in the Cardinals hasn’t been shaken. (Last week: No. 3)

4. Green Bay (8-2) — While the headlines are always about Aaron Rodgers, the Packers’ defense gets stingier by the week. The Pack has allowed 180 points — just two more than NFC-best New Orleans — after blanking Seattle. (Last week: No. 2)

5. New England (6-4) — After starting 1-3, the Patriots are ascending. New England and Buffalo play twice in December, and those games will decide the AFC East.  (Last week: unranked)

28. Atlanta Falcons (4-5) — The Falcons are ranked here despite winning more games than nine other teams. That’s because they lead the league in doing the least with the most. Their performance against Dallas can be described in one word: inexcusable. (Last week: unranked)

29. New York Jets/Giants (5-13) — In a rebuilding year, the Jets turn to 36-year-old Joe Flacco to start at QB against Miami? Flacco might give them the best chance of winning, but young Mike White needs the experience of facing the Dolphins’ pass rush. The Giants will be in the Monday night spotlight against battered Tampa Bay. Let’s see if Daniel Jones can capitalize. (Last week: Jets/Giants No. 28)

30. Jacksonville (2-7) — Defensive end Josh Allen has been a terror with three sacks, an interception, and a fumble recovery in the last three games. However, the Jaguars are up against San Francisco’s Mr. Everything, Deebo Samuel, and have lost 13 straight against NFC teams. (Last week: No. 29)

32. Houston (1-8) — The Texans have lost eight straight and are only scoring 14 points a game. The news gets worse. They play at Tennessee on Sunday and will face the Titans again in January.  (Last week: No. 31)