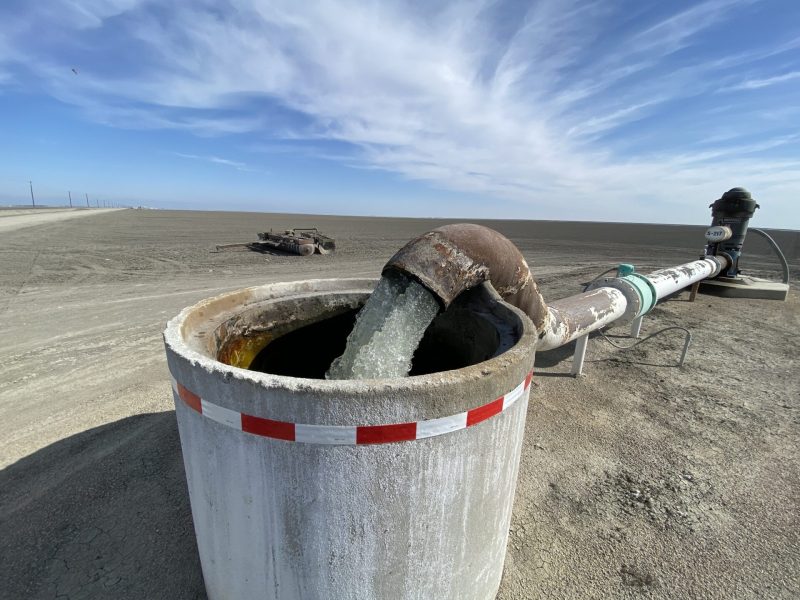 Groundwater gushes from a well on Pueblo Avenue in the Tulare Lake bed in Kings County. (SJV Water/Lois Henry)
Share with friends

As California’s Central Valley water managers nervously await the first official Department of Water Resources responses to plans for how they expect to fix massive groundwater over-pumping, some were dismayed to “stumble” on comments from a different, and very powerful, state water agency.

Since the Water Board is the ultimate enforcement arm of the state’s Sustainable Groundwater Management Act, the significance of these comments was immediately noted by water managers.

The Water Board found a great deal lacking in the Tulare Lake subbasin groundwater plan.

Among other problems, the Water Board felt the Tulare Lake plan allows too much continued groundwater over-drafting that will potentially harm water quality and domestic wells and exacerbate already troubling land subsidence.

The plan allows so much continued pumping that it anticipates the small town of Corcoran, which has already sunk more than 11 feet, to sink up to another 11 feet over the next 19 years.

Gallock said all of the Water Board’s comments, dated Aug. 23, 2021, are relevant to projects the groundwater agencies are already implementing but the comments weren’t sent to the groundwater agencies. They were sent directly to DWR and posted on the department’s SGMA website under a tab called “Submitted After Comment Period.”

Plans for critically overdrafted subbasins, which includes most of the Central Valley, were submitted in January 2020. The public comment period closed in May that year. Gallock said groundwater agencies in Tulare Lake were alerted to the Water Board’s comments after someone stumbled on them through the SGMA website about a month ago.

“I am surprised at the manner in which they approached this,” said Kole Upton, president of the Chowchilla Water District groundwater agency.

Concerns About Domestic Wells in Chowchilla

The Water Board’s main concerns with the Chowchilla plan are that it doesn’t explain how its proposed groundwater levels may impact domestic wells and that some of its proposals to bring up those levels rely on new water rights that may or may not be granted. The Water Board is also in charge of granting water rights.

“We’re still getting facts on the inventory of domestic wells. We can’t address what we don’t know,” Upton said.

The Water Board submitted comment letters dated Aug. 23 on three other groundwater plans, including North and South Yuba, Eastern San Joaquin, and Merced.

Upton, Gallock, and other groundwater agency managers said it’s unclear how much weight the Water Board’s comments will have with DWR, which they expect will send formal comments on the plans sometime before the end of this year or within the first part of 2022.

“This is not what I thought the role of the Water Board would be,” Gallock said. “We thought they would be a backstop for enforcement but it appears they’re going to be much more proactive in our (plans).”

Under SGMA, once the plans were submitted in Jan. 2020, the clock started running for DWR to review them and make initial assessments. If plans aren’t approved, it’s expected DWR will work with an agency unless the agency is recalcitrant or just not up to the task for some reason. Then DWR can refer the agency to the Water Board for enforcement.

The Water Board has a number of tough enforcement actions it can take including setting pumping limits and issuing fines, making it, essentially the state’s groundwater “cop.”

“We’re still getting facts on the inventory of domestic wells. We can’t address what we don’t know.” — Kole Upton, president, Chowchilla Water District

A spokesperson for the Water Board wrote in an email that the Board’s comments are intended to “highlight our concerns now, so that any issues can be fixed and so that plan implementation is successful going forward.”

This isn’t the first time the Water Board stepped in early on the SGMA timeline.

On Dec. 8, 2020, it submitted comments to DWR in a similar manner for five other groundwater plans: 180-400 Foot Aquifer (which covers the northern Salinas Valley area); Santa Cruz Mid-County, Paso Robles Area, Indian Wells Valley, and Cuyama Valley. And the Water Board’s comments were similarly critical of those plans on everything from groundwater quality to relying on water rights not yet in hand.

Six months later, DWR issued approvals for the 180-400 Foot Aquifer and Santa Cruz Mid-County plans. It found the Paso Robles and Cuyama Valley plans deficient and sent them back for more work. The Indian Wells Valley plan is still under review.

So, it’s hard to say what effect the Water Board comments will have. Either way, water managers can expect more.

The Water Board spokesperson said the board will continue submitting comments going forward. In fact, two more comment letters will be posted this week. He didn’t say on which groundwater plans, however.

The Water Board submitted comments on five other subbasin groundwater plans on Dec. 8, 2020:

A Chowchilla Woman, Her Murderous Husband, and Failed Gun Control