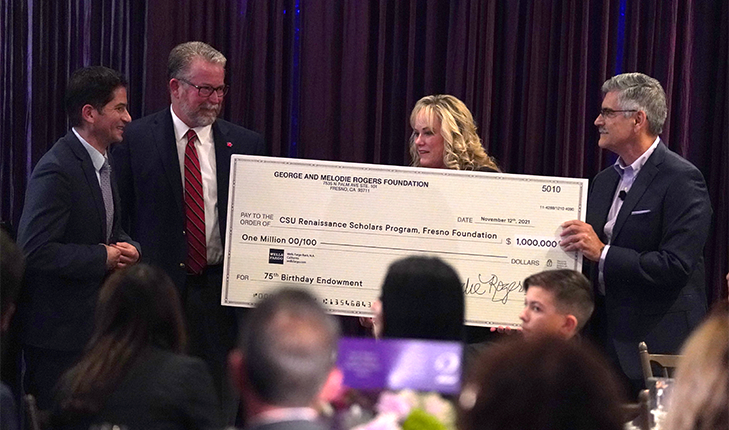 You might not know it from the headlines, but there are a lot of good people doing great things in this world.

Example A: The George and Melodie Rogers Foundation’s gift of $1 million to help Fresno State students who have been homeless or in foster care.

The gift to the university’s Renaissance Scholars Programs will bring back summer internships lost in 2015 because of funding shortfalls. Now, the interns will earn a $2,400 stipend for their work.

University officials described the gift as “transformative.” The donation was announced on Friday during a celebration of George Rogers’ life.

“The experience our students will receive through these internships represents a unique opportunity of growth and belonging; exactly what they need to become the next generation of leaders,” said Fresno State President Saúl Jiménez-Sandoval.

George Rogers, who died in February, founded and owned Fresno-based national staffing agency PrideStaff. He earned a business degree from Fresno State in 1971.

This contribution continues the Rogers family’s generosity to the community. Melodie Rogers said that this gift in her husband’s memory will help Renaissance Scholars realize their academic and life goals. Their foundation was founded in 2019.

Fresno State started Renaissance Scholars in 2008 to support students who were formerly in foster care or homeless. Among the services: admission assistance, counseling, and mentoring.