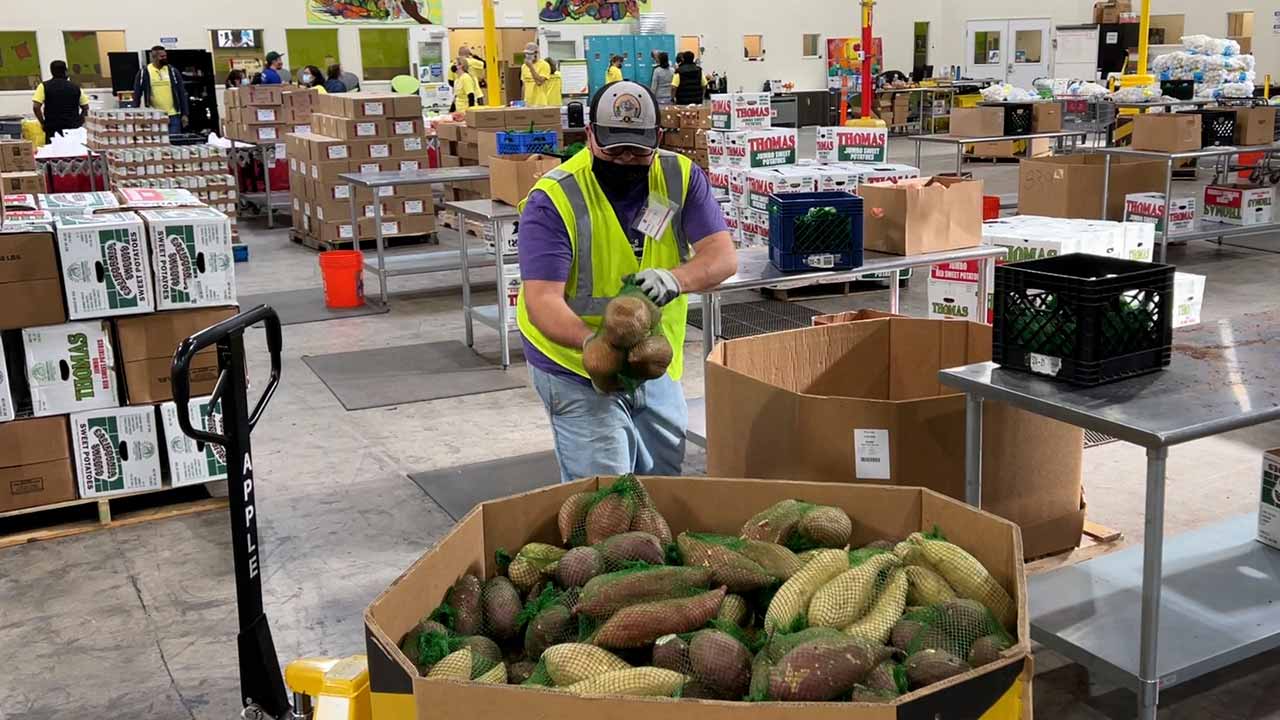 The higher costs and limited availability mean some families may get smaller servings or substitutions for staples such as peanut butter, which costs nearly double what it did a year ago. As holidays approach, some food banks worry they won’t have enough stuffing and cranberry sauce for Thanksgiving and Christmas.

“What happens when food prices go up is food insecurity for those who are experiencing it just gets worse,” said Katie Fitzgerald, chief operating officer of Feeding America, a nonprofit organization that coordinates the efforts of more than 200 food banks across the country.

Food banks that expanded to meet unprecedented demand brought on by the pandemic won’t be able to absorb forever food costs that are two to three times what they used to be, she said.

Supply chain disruptions, lower inventory and labor shortages have all contributed to increased costs for charities on which tens of millions of people in the U.S. rely on for nutrition. Donated food is more expensive to move because transportation costs are up, and bottlenecks at factories and ports make it difficult to get goods of all kinds.

If a food bank has to swap out for smaller sizes of canned tuna or make substitutions in order to stretch their dollars, Fitzgerald said, it’s like adding “insult to injury” to a family reeling from uncertainty.

In the prohibitively expensive San Francisco Bay Area, the Alameda County Community Food Bank in Oakland is spending an extra $60,000 a month on food. Combined with increased demand, it is now shelling out $1 million a month to distribute 4.5 million pounds of food, said Michael Altfest, the Oakland food bank’s director of community engagement.

Pre-pandemic, it was spending a quarter of the money for 2.5 million pounds of food.

The cost of canned green beans and peaches is up nearly 9% for them, Altfest said; canned tuna and frozen tilapia up more than 6%; and a case of 5-pound frozen chickens for holiday tables is up 13%. The price for dry oatmeal has climbed 17%.

Many People Saying They Can’t Afford to Buy Food

On Wednesdays, hundreds of people line up outside a church in east Oakland for its weekly food giveaway. Shiloh Mercy House feeds about 300 families on those days, far less than the 1,100 families it was nourishing at the height of the pandemic, said Jason Bautista, the charity’s event manager. But he’s still seeing new people every week.

“And a lot of people are just saying they can’t afford food,” he said. “I mean they have the money to buy certain things, but it’s just not stretching.”

Families can also use a community market Shiloh opened in May. Refrigerators contain cartons of milk and eggs while sacks of hamburger buns and crusty baguettes sit on shelves.

Oakland resident Sonia Lujan-Perez, 45, picked up chicken, celery, onions bread and and potatoes — enough to supplement a Thanksgiving meal for herself, 3-year-old daughter and 18-year-old son. The state of California pays her to care for daughter Melanie, who has special needs, but it’s not enough with monthly rent at $2,200 and the cost of milk, citrus, spinach and chicken so high.

“That is wonderful for me because I will save a lot of money,” she said, adding that the holiday season is rough with Christmas toys for the children.

Many people also rely on other government aid, including the federal Supplemental Nutrition Assistance Program, or SNAP.

Kate Waters, a spokeswoman for the USDA, which administers the SNAP program, said there were no immediate plans for an emergency boost in SNAP benefits to compensate for the rising food costs. But she said that previous moves by the Biden administration such as the permanent increase in SNAP benefits earlier this year and a fresh wave of funding for food banks should help ease the burden. In addition, Waters said the fact that schools are open and offering free lunches and, in some cases, free breakfast, should also help.

Bryan Nichols, vice president of sales for Transnational Foods Inc., which delivers to more than 100 food banks associated with Feeding America, said canned foods from Asia— such as fruit cocktail, pears and mandarin oranges— have been stuck overseas because of a lack of shipping container space.

Issues in supply seem to be improving and prices stabilizing, but he expects costs to stay high after so many people got out of the shipping business during the pandemic. “An average container coming from Asia prior to COVID would cost about $4,000. Today, that same container is about $18,000,” he said.

At the Care and Share Food Bank for Southern Colorado in Colorado Springs, CEO Lynne Telford says the cost for a truckload of peanut butter —40,000 pounds (18,100 kilograms)_has soared 80% from June 2019 to $51,000 in August. Mac and cheese is up 19% from a year ago and the wholesale cost of ground beef has increased 5% in three months. They’re spending more money to buy food to make up for waning donations and there’s less to choose from.

The upcoming holidays worry her. For one thing, the donation cost to buy a frozen turkey has increased from $10 to $15 per bird.

“The other thing is that we’re not getting enough holiday food, like stuffing and cranberry sauce. So we’re having to supplement with other kinds of food, which you know, makes us sad,” said Telford, whose food bank fed more than 200,000 people last year, distributing 25 million pounds of food.

Alameda County Community Food Bank says it is set for Thanksgiving, with cases of canned cranberry and boxes of mashed potatoes among items stacked in its expanded warehouse. Food resourcing director Wilken Louie ordered eight truckloads of frozen 5-pound chickens —which translates into more than 60,000 birds— to give away free, as well as half-turkeys available at cost.

For that, Martha Hasal is grateful.

“It’s going to be an expensive Thanksgiving, turkey is not going to cost like the way it was,” said Hasal as she loaded up on on cauliflower and onions on behalf of the Bay Area American Indian Council. “And they’re not giving out turkey. So thank God they’re giving out the chicken.”