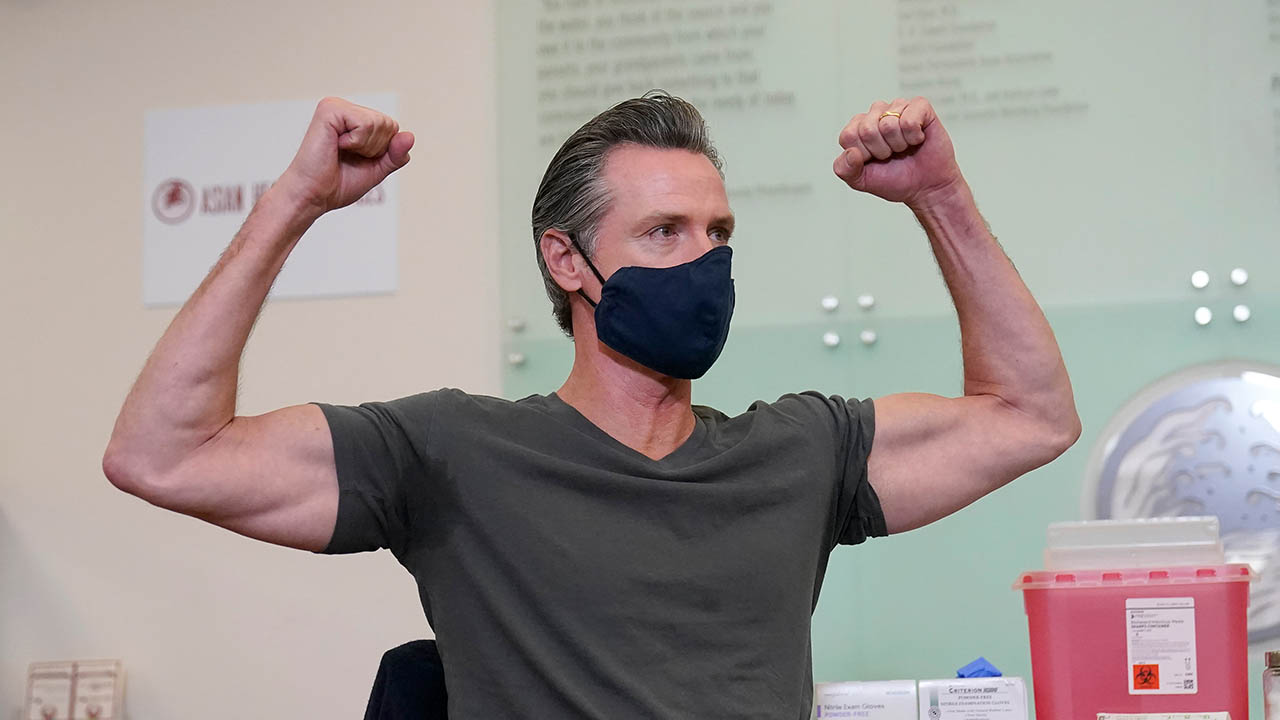 Gov. Gavin Newsom gestures after receiving a COVID vaccine booster shot on Oct. 27. He has made no public appearances since then. (AP Photo/Jeff Chiu)
Share with friends

A week after abruptly canceling plans to attend the United Nations climate summit in Scotland, Gov. Gavin has receded from public view to deal with with unspecific family obligations.

When the surprising announcement was made Oct. 29, a spokesperson said Newsom planned to participate virtually in the conference this week. But the California delegation’s schedule at the meeting this week, released by the governor’s office, did not include Newsom.

Instead, the schedule included in-person appearances by Lt. Gov. Eleni Kounalakis, who Newsom tapped to lead the state delegation in his absence; Sam Aseffa, director of the Governor’s Office of Planning and Research; David Hochschild, chair of the California Energy Commission and California Natural Resources Agency Secretary Wade Crowfoot.

After the federal government late Tuesday authorized Pfzier’s coronavirus vaccine for emergency use for kids 5 to 11, California implemented what state officials deemed a “robust vaccination program.” It’s the kind of announcement that Newsom typically makes in-person in front of TV cameras.

But the governor’s office announced the plan with an emailed news release. His last public appearance was Oct. 27, when he received a coronavirus booster shot.

Newsom’s office did not respond to questions Friday about what the governor has been doing this week.

Newsom spokesperson Erin Mellon said the governor will appear virtually at the U.N. conference next week.

“The Governor will participate in a couple events next week focused on global efforts to advance zero emission vehicles and to move beyond oil,” she said Thursday.

Newsom submitted some prerecorded remarks to a transit conference earlier this week and his office announced some appointments to state agencies and boards. He also posted a photo on his Instagram account with his wife and four children, aged 5 to 12, dressed as pirates on Halloween.

His Twitter account went dark from Oct. 28 until Tuesday, when he tweeted Election Day support to fellow Democratic Govs. Phil Murphy of New Jersey and Terry McAuliffe of Virginia, who were seeking reelection. As the week went on, Newson’s Twitter account was more active.

It’s rare, but not unprecedented, for Newsom to go a whole week without some type of appearance. Such absences are usually explained, including when Newsom leaves the state for vacation.

In this case, the only statement from Newsom’s office came Oct. 29 and referred to unspecified family obligations. No additional information about the family’s circumstances has been released.

It’s a relatively slow time in Sacramento as the state Legislature is not in session and won’t meet again until January. Recent storms mean no major wildfires are burning out of control, as has been the case in recent years.

Kounalakis returned from Scotland on Thursday. Assembly Speaker Anthony Rendon will lead a second delegation of state lawmakers to Scotland next week for a series of meetings with world leaders and a tour of off-shore wind energy in Aberdeen, Scotland.