Fresno State's Jake Haener has been sacked 14 times and absorbed countless hits, but he keeps getting up. (GV Wire/Randy Reed)
Share with friends

Hit Jake Haener with your best shot, he’s going to get back up.

The resilient Fresno State senior quarterback has shown countless times this season that he’s staying in the game after absorbing a big hit in the pocket.

The question is, will Haener have to rely on his toughness Saturday versus Boise State? Or will his offensive line provide a perfect pocket for Haener to launch the Bulldogs’ passing game?

A victory against the Mountain West’s historically dominant program is crucial in Fresno State’s drive to secure a bid in the conference championship game.

Fresno State, which is ranked No. 25 in the AP poll, enters the 4 p.m. home game atop the West Division at 4-1 and 7-2 overall. The Mountain Division Broncos are 2-2 and 4-4.  CBS Sports Network is airing the game. A sellout crowd is expected.

Haener was knocked around by UCLA, but led the Bulldogs to victory. He had to leave the game temporarily after a roughing-the-passer call in the Hawaii loss and took several hits in last week’s win at San Diego State.

“It’s the nature of the game. You’re going to get hit,” DeBoer said.

But, how many shots can the senior take?

“One hit is too many” offensive coordinator Ryan Grubb said.

Grubb said that, for the most part, the offensive line is doing its job. However, he wants the referees to take a closer look at what happens to Haener after he delivers a pass.

“The most significant hits that Jake took in the football game were late hits,” Grubb said of the San Deigo State game. “So there’s a piece of that too when Jake’s back there that he’s being taken care of by the game operation as well. The hardest hit he took, he got a flag on. That was clearly an illegal hit.”

The stat sheet shows Haener has been sacked 14 times (the team has allowed two other sacks on backup QB Jaylen Henderson) — about the median mark for all FBS teams. It also show a more unofficial seven QB hurries, or times rushed or knocked down. The real number may be bigger.

“We’ve done a better job and you see that in our sack totals coming back down. And, you know, I think Jake’s been feeling better in practice, and I think you see his production continuing to go back up because he’s out there all week long,” DeBoer said. 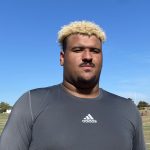 “He does not deserve to be on the ground. He plays his balls off every play. And when we need to do the same to keep him safe.” — Left tackle Dontae Bull on QB Jake Haener

“If Jake is touched by my guy, that’s on me completely. No one else’s fault, no matter if I have help or not. I should handle my job and keep my buddy up. He doesn’t deserve to be on the ground as much as he has been,” Bull said.

What does Bull, a native of Victoria, British Columbia, and the offensive line think when Haener gets knocked down?

“We got to respond. We got to get him up, make sure he’s all right, and we got to remind the guys that we can’t let that stuff happen anymore. He does not deserve to be on the ground. He plays his balls off every play. And when we need to do the same to keep him safe,” Bull said.

There is a special bond between Bull and the quarterback he protects.

“Jake’s my best friend, so we have really very close bond together,” Bull said.

“He is extremely efficient. His accuracy, his arm strength, the platforms he can throw from. He’s got some very talented wide receivers and tight ends to go along with it. But he’s got a quick release and stays on time to within the progressions,” Avalos said at his weekly news conference.

The Broncos’ defense has recorded 17 sacks, tied for eighth in the conference.

US Mandates Vaccines or Tests for Big Companies by Jan. 4