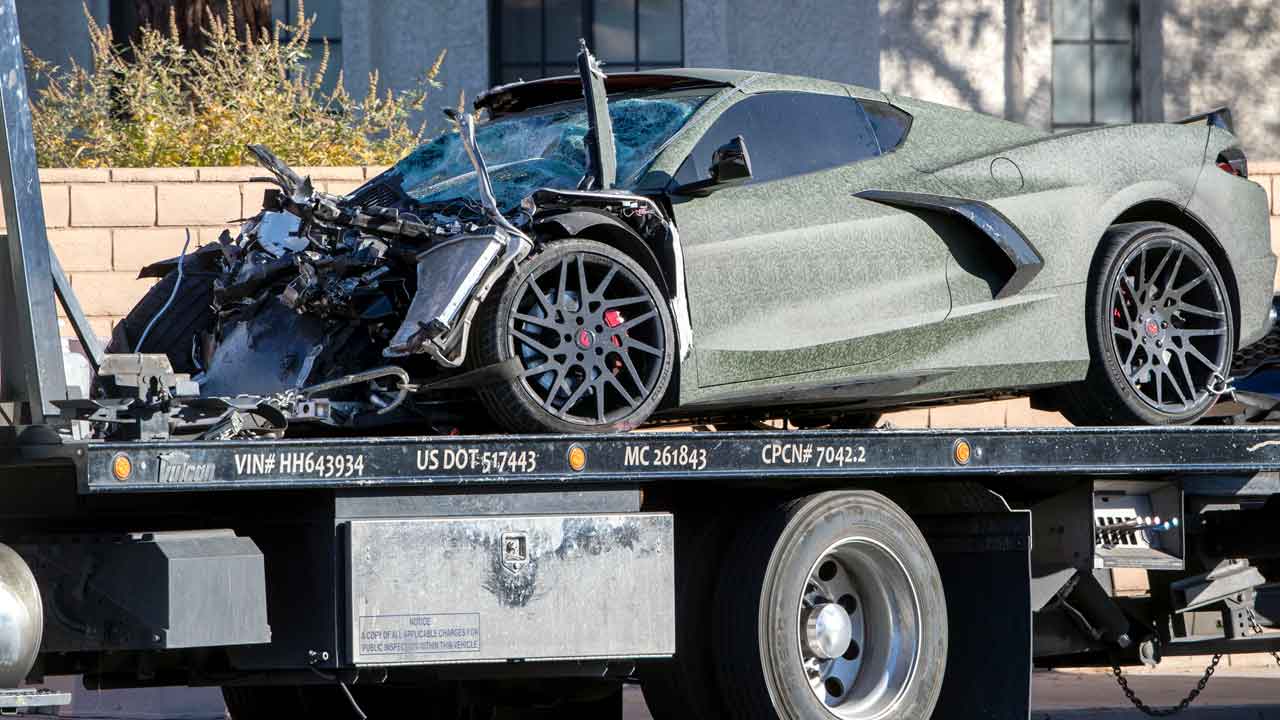 The Raiders released Ruggs late Tuesday, just hours after the crash and shortly after he was released from a hospital and booked into a Las Vegas jail.

The 22-year-old former first-round NFL draft pick remained seated in a wheelchair with a foam brace on his neck and jail guards as his elbows during his initial court appearance Wednesday on pending felony charges of driving under the influence of alcohol resulting in death and reckless driving.

The extent of his injuries was not disclosed, although Clark County District Attorney Steve Wolfson said outside court that he believed Ruggs suffered a leg injury.

Ruggs’ girlfriend, identified by police as Kiara Je’nai Kilgo-Washington, 22, of Las Vegas, was with him in the car and injured in the crash. She underwent surgery Tuesday for a severe arm injury, authorities said.

According to police, Tina O. Tintor was the name of the Las Vegas woman who died with her dog in a wrecked and burned Toyota Rav4. Records show she lived several blocks from where the crash occurred.

Four men, who Wolfson later identified as family members, attended the hearing but declined to speak with reporters. 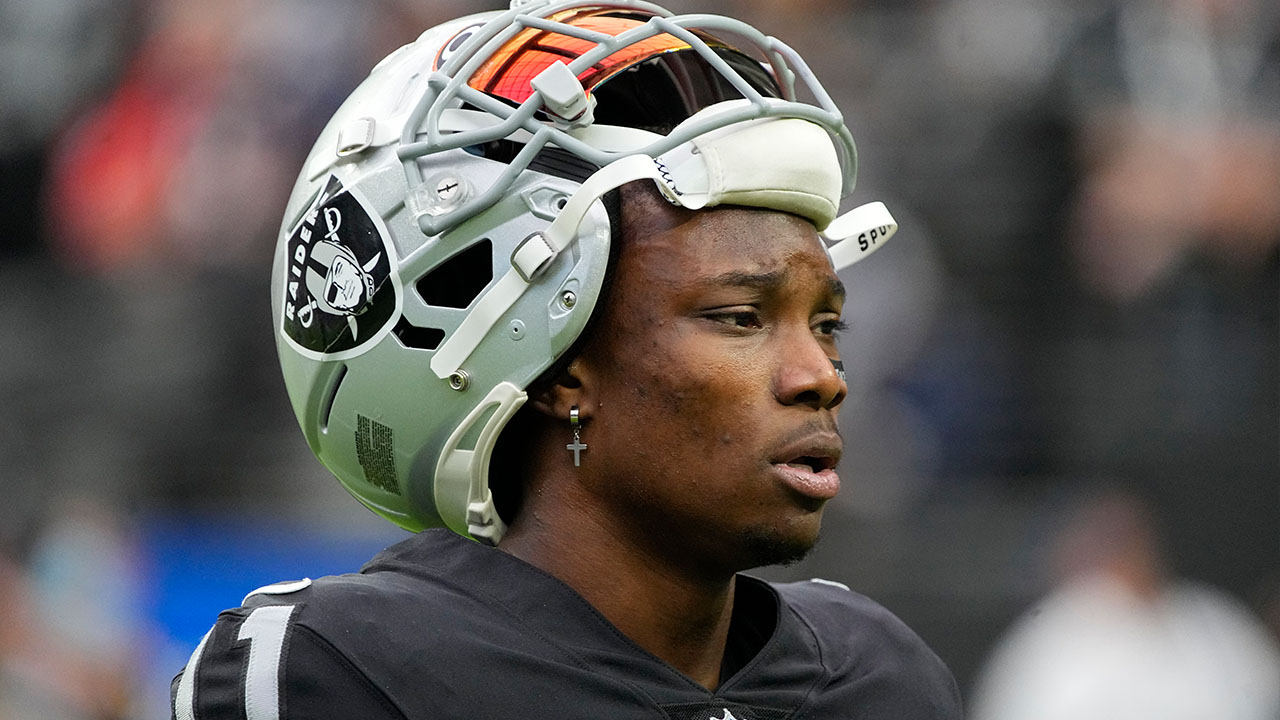 Las Vegas Raiders wide receiver Henry Ruggs III walks on the field before an NFL football game against the Chicago Bears, Oct. 10, 2021, in Las Vegas. Ruggs was released by the Raiders after allegedly driving at 156 mph with a blood-alcohol content twice Nevada’s legal limit when his Corvette slammed into the rear of a vehicle that burned, killing a 23-year-old woman. (AP File)

Las Vegas Justice of the Peace Joe M. Bonaventure said he was troubled by his initial review of the case against Ruggs, adding that in 16 years on the bench he had never heard of a crash involving a vehicle traveling so fast.

Nevertheless, he rejected prosecutor Eric Bauman’s request to set Ruggs’ bail at $1 million and instead set the amount at $150,000 with strict conditions including home confinement, electronic monitoring, no alcohol, no driving, and the surrender of Ruggs’ passport.

Ruggs’ attorneys, David Chesnoff and Richard Schonfeld, had argued that bail is by law meant to ensure their client returns to court, not to punish him.

Bonaventure, who in January 2008 returned former football star O.J. Simpson to prison for violating terms of his pretrial release in an armed robbery case, warned Ruggs that if he didn’t comply with restrictions he faced re-arrest and a return to jail.

Chesnoff said later that Ruggs should be able to post $150,000 bail.

Wolfson said outside court that he intends to file a second felony DUI charge against Ruggs related to injuries to Kilgo-Washington. Bonaventure noted the couple has a 3-year-old daughter together.

The district attorney said he might also file a weapon charge against Ruggs related to possessing a gun while under the influence of alcohol. Ruggs had a loaded gun in the car at the time of the crash.

Bauman told the judge that airbag computer records showed the Corvette decelerated from 156 mph to 127 mph before it slammed into the Toyota at about 3:40 a.m. Tuesday, rupturing the Toyota’s fuel tank and igniting a fireball.

Bauman said Ruggs was uncooperative with police and medical workers, and his blood-alcohol level taken within the required two hours after the crash was 0.16%. Police said previously in a statement that Ruggs “showed signs of impairment.”

“This is particularly tragic,” the prosecutor told the judge. He said that since 2013, the NFL Players Association has contracted with rideshare services to provide free transportation to members “specifically to prevent tragedies such as this.”

Probation is not an option in Nevada for a conviction on a charge of DUI causing death or DUI causing substantial bodily injury. Both carry a possible sentence of two to 20 years in state prison. Added to a possible one to six years for reckless driving, Bauman told Bonaventure that Ruggs could face up to 46 years behind bars if convicted.

Property records show Ruggs owns a $1.1 million home in a neighborhood not far from where the crash occurred.

Ruggs was supposed to be a cornerstone for the Raiders. He was picked 12th overall in the 2020 draft after three years at Alabama, including helping the Crimson Tide win the NCAA championship as a freshman in 2017.

Ruggs’ crash occurred three weeks after Jon Gruden abruptly resigned as Raiders coach over emails he sent before being hired by the team in 2018. Gruden stepped down after The New York Times reported that the emails had racist, homophobic and misogynistic comments.

The AFC West-leading Raiders (5-2) have won two in a row under interim coach Rich Bisaccia and now return to the field this week without their leading receiver in yardage. They’ll visit the New York Giants (2-6) on Sunday.