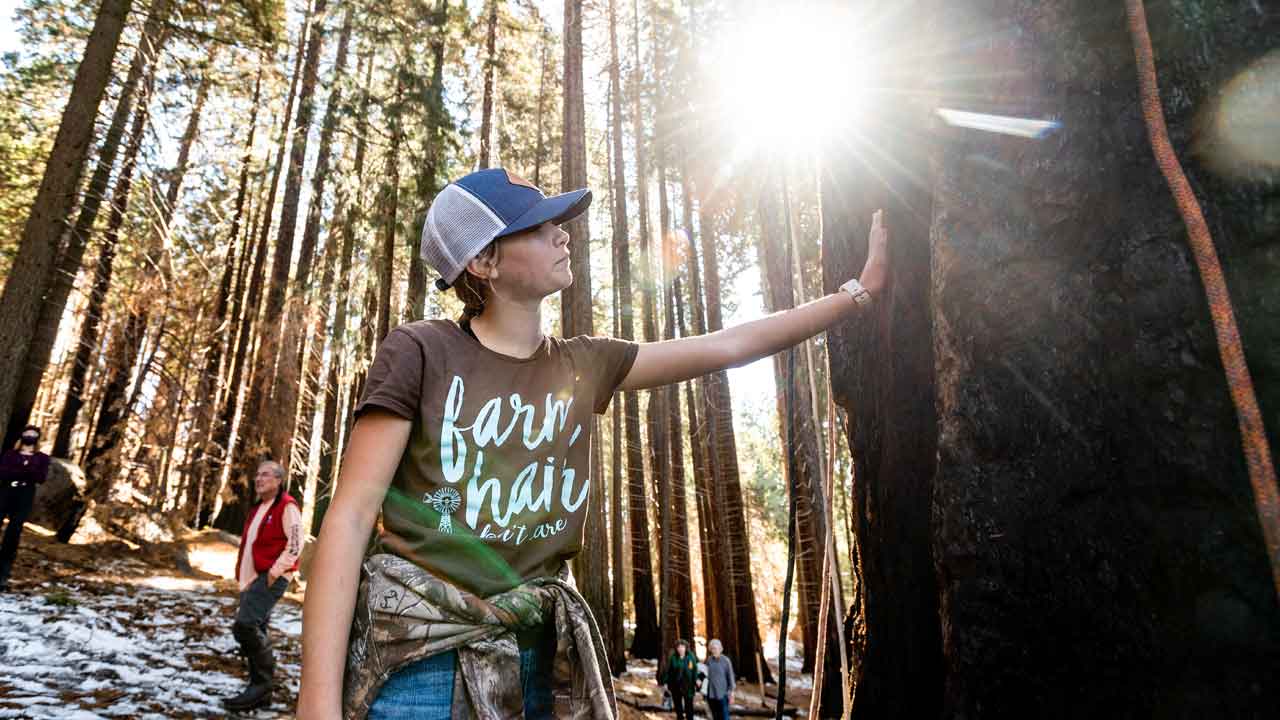 SEQUOIA CREST— Ashtyn Perry was barely as tall as the shovel she stomped into barren ground where a wildfire last year ravaged the Tulare County community of Sequoia Crest and destroyed dozens of its signature behemoth trees.

The 13-year-old with a broad smile and a braid running to her waist had a higher purpose that — if successful — she’ll never live to see: to plant a baby sequoia that could grow into a giant and live for millennia.

“It’s really cool knowing it could be a big tree in like a thousand years,” she said.

Unusual Project to Save Majestic Trees

The bright green seedling that barely reached Perry’s knees is part of an unusual project to plant offspring from some of the largest and oldest trees on the planet to see if genes that allowed the parent to survive so long will protect new growth from the perils of climate change.

The effort led by the Archangel Ancient Tree Archive, a Michigan nonprofit that preserves the genetics of old-growth trees, is one of many extraordinary measures being taken to save giant sequoias that were once considered nearly fire-proof but are at risk of being wiped out by more intense wildfires.

The giant sequoia is the world’s largest tree by volume and closely related to the redwood, the world’s tallest. Sequoias grow naturally only in a 260-mile belt of forest on the western slopes of the Sierra Nevada mountains. They have a massive trunk and can grow over 300 feet tall. The coast redwood is more slender and is native near the Pacific Ocean in Northern California.

Giant sequoias — and redwoods — are some of the best fire-adapted plants. Thick bark protects their trunks, and their canopies can be so high they are out of reach of flames. Sequoias even rely on fire to help open their cones to disperse seeds, and flames clear undergrowth so seedlings can take root and get sunlight.

In recorded history, large sequoias had never incinerated before 2015. Destruction of the majestic trees hit unprecedented levels last year when 10% to 14% of the estimated 75,000 trees larger than 4 feet in diameter burned. Thousands more potentially were lost this year during fires that burned into 27 groves — about a third of all groves — in Sequoia National Park and the adjacent Sequoia National Forest. Scientists are still tallying the damage.

Climate change and a century of policies emphasizing extinguishing wildland blazes rather than letting some burn to prevent bigger future fires are to blame, said Christy Brigham, chief of resource management and science at Sequoia and Kings Canyon National Parks. Hotter droughts have led to more intense fires that have burned through fuels accumulated through fire suppression.

Last year’s destruction to the sequoias brought Brigham to tears.

“They’re so big and so old and so individual and iconic and quirky that even people who don’t love trees, love them. They speak for all the trees,” Brigham said. “The fact that we’ve now created fires that they can’t survive is very heartbreaking.”

To save the trees this year, extreme measures were taken, including wrapping trunks of the largest trees in a fire-resistant foil, setting up sprinklers, raking the flammable matter from around the trees and even using gel in the canopies to repel flames.

But those labor-intensive measures are not practical, Brigham said. More needs to be done before fire approaches, including thinning vegetation and using prescribed burns to reduce the buildup of vegetation. They are also thinking about replanting.

One of the areas that burned intensely last year was the Alder Creek grove, where the Sequoia Crest community has stood since the middle of last century. Half the 100 homes and cabins were destroyed, leaving empty concrete foundations next to charred tree stumps. Some blackened giants still stand sentry on steep hillsides.

It was in that grove, one of the few privately owned, that Archangel had gathered cones and taken clippings over the past decade to clone and preserve the genes of two of the oldest and largest trees. One of those trees, named Stagg, the world’s fifth-largest, survived while the fire killed one named Waterfall.

“Talk about divine providence,” said David Milarch, co-founder of Archangel. “Little did we know that Waterfall would burn down two years ago and we’d have the only seedlings of that tree.”

Milarch’s mission is to archive the genetics of ancient trees, breed them and replant them. He believes the oldest trees have superior genes that enabled them to live through drought, disease and fire and will give their offspring a better chance of survival.

When Milarch took clippings and cones from Stagg and Waterfall, the grove was still privately owned. But it was bought two years ago by Save the Redwoods League.

The league is already replanting in the grove to study if seedlings can survive where high-severity fire destroyed any ability for trees to naturally reproduce, said Joanna Nelson, science director for the organization.

While Nelson wouldn’t rule out using seedlings from Stagg, estimated to be 3,000 years old, the project is designed to find the best genetic diversity to increase their survival.

“That genetic makeup served that tree very well for the past 3,000 years,” Nelson said. “However, we know that the next 3,000 years are going to be more difficult –- in terms of warming and drying land and air and bigger wildfires that are more frequent. We have conditions coming that these trees haven’t experienced.”

Nelson applauded the effort by Sequoia Crest to replant.

Residents who lost homes and those who were spared banded together to excavate water pipes to provide irrigation for the seedlings and, along with Archangel workers and volunteers, dug holes under a thin coat of snow last week and planted small green flags to mark planting locations.

Uta Kogelsberger, whose cabin was destroyed, said she doesn’t plan to rebuild but wants to leave a legacy she will probably never see.

“We are all in some ways responsible for these fires — the way we’ve been treating our planet,” Kogelsberger said. “The loss of the cabin was absolutely devastating, but the loss of the amazing ecosystem that surrounds it is just beyond compare. You know, you can replace a house, but you cannot replace a 2,000 to 3,000-year-old sequoia tree.”

Residents were joined last week by a science class of 7th and 8th graders from Springville, which sits at the bottom of the mountain, to help plant 150 of the 7-year-old seedlings.

Teacher Vicki Matthews drove the school bus up the cliff-hanging road above the Tule River canyon and into an evergreen forest that first turned a rusty shade from drought or fire damage and then gave way to entire stands of black trees silhouetted against the snow.

The 35 students fanned out across an area once known as “downtown” Sequoia Crest, where the original homes were built and now a sad scene of destruction with stumps poking from the snow like tombstones.

Ashtyn and two friends carefully removed the little tree from its pot, untangled the roots and planted it near a charred rock, packing the soil around it. They named it “Timmy the Tree.”

Ashtyn said she’d like to return once a year to see how it’s growing. She hopes it becomes a giant.

What’s the Next Gig for Fresno’s Audra McDonald?