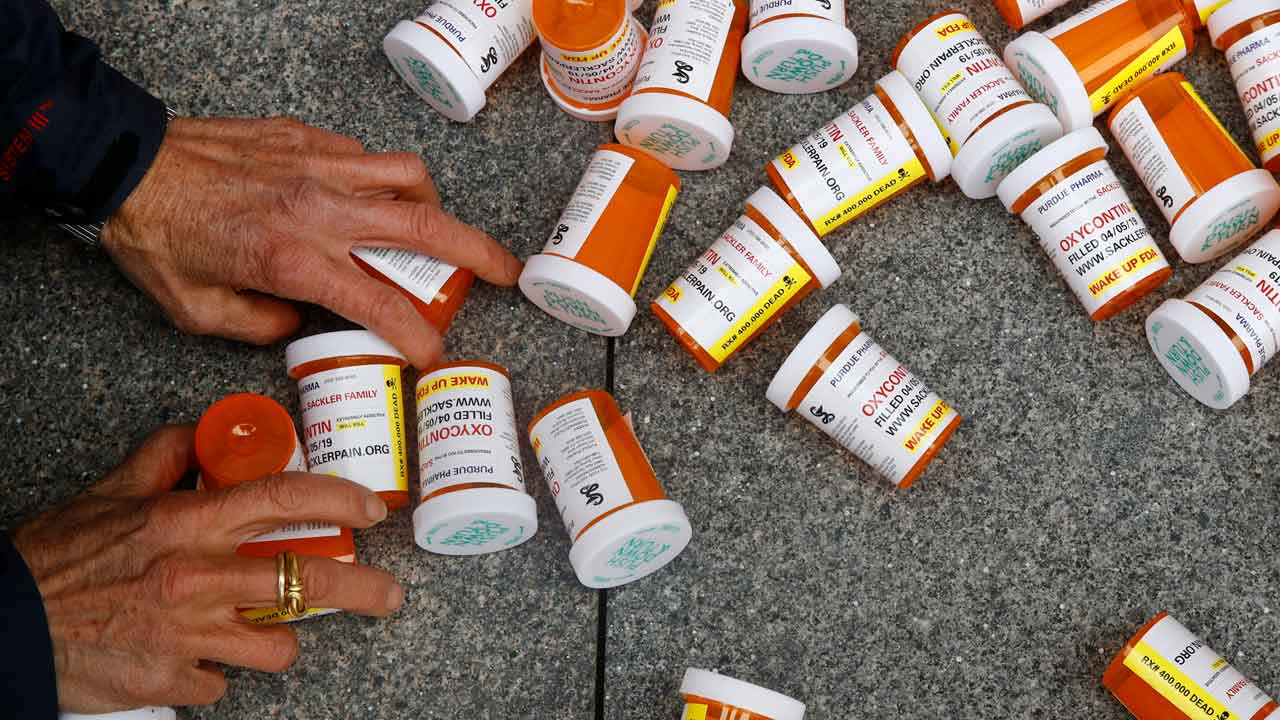 A protester gathers containers that look like OxyContin bottles at an anti-opioid demonstration. (AP Fileo/Patrick Semansky)
Share with friends

LOS ANGELES — A California judge has ruled for top drug manufacturers as local governments seek billions of dollars to cover their costs from the nation’s opioid epidemic.

“There is simply no evidence to show that the rise in prescriptions was not the result of the medically appropriate provision of pain medications to patients in need,” Wilson wrote in a ruling of more than 40 pages.

Los Angeles, Orange and Santa Clara counties and the city of Oakland argued that the pharmaceutical companies misled both doctors and patients by downplaying the risks of addictions, overdoses, deaths and other health complications while overstating the benefits for long-term health conditions.

The plaintiffs said they were disappointed by the ruling but planned to appeal to “ensure no opioid manufacturer can engage in reckless corporate practices that compromise public health in the state for their own profit.”

The companies had argued in court filings “that opioid medications are an appropriate treatment for many chronic-pain patients” and that much of their marketing mimicked approved warnings by the U.S. Food and Drug Administration.

‘Opening the Floodgates” for Opioid Use

Historically, the local jurisdictions say, the powerful drugs had been used only immediately after surgeries or for other acute, short-term pain, or for cancer or palliative care.

The drugmakers “successfully transformed the way doctors treat chronic pain, opening the floodgates of opioid prescribing and use,” the lawsuit contended. “This explosion in opioid prescriptions and use has padded Defendants’ profit margins at the expense of chronic pain patients.”

The federal government says nearly a half-million Americans have died from opioid abuse since 2001.

All sides have acknowledged that there is an opioid abuse epidemic.

In a statement, Johnson & Johnson said the “crisis is a tremendously complex public health issue,” but the decision showed it engaged in “appropriate and responsible” marketing of its prescription painkillers.

Endo International said the decision was “thorough and thoughtful” following months of testimony and that the company’s “lawful conduct did not cause the widespread public nuisance at issue” in the lawsuit.

Teva said it was pleased with the ruling but “a clear win for the many patients in the U.S. who suffer from opioid addiction will only come when comprehensive settlements are finalized and resources are made available to all who need them.”

2nd of Many Cases Expected to Go to Trial

The plaintiffs projected that, based on experts’ estimates, it could cost $50 billion to provide comprehensive opioid abatement programs in the four jurisdictions that filed the lawsuit. The money would go for things like ongoing opioid abuse prevention and treatment programs in Los Angeles and Santa Clara counties.

The California case was the first such U.S. lawsuit when it was filed in 2014, prosecutors said at the time. But thousands of similar lawsuits have since been filed nationwide by cities, counties and states.

It was just the second such case to go to trial, after an Oklahoma judge ordered Johnson & Johnson to pay $465 million in 2019. The company is appealing that decision.

Johnson & Johnson and those three companies in July were in the final stages of negotiating a $26 billion settlement covering thousands of government lawsuits, though it could take months to get final approval from state and local governments.

New York state separately has a $1 billion-plus deal involving the three drug distributors. But it is going to trial against are Teva Pharmaceutical Industries, Endo International and AbbVie Inc., the same defendants as in the California case.

Without admitting wrongdoing, Johnson & Johnson previously settled with New York for $230 million before a trial started there against manufacturers, regional distribution companies and pharmacies. Johnson & Johnson has said it is prepared to contribute up to $5 billion to a national settlement.

The deals did not stop the trials in West Virginia and California. The weekslong California trial started April 19.