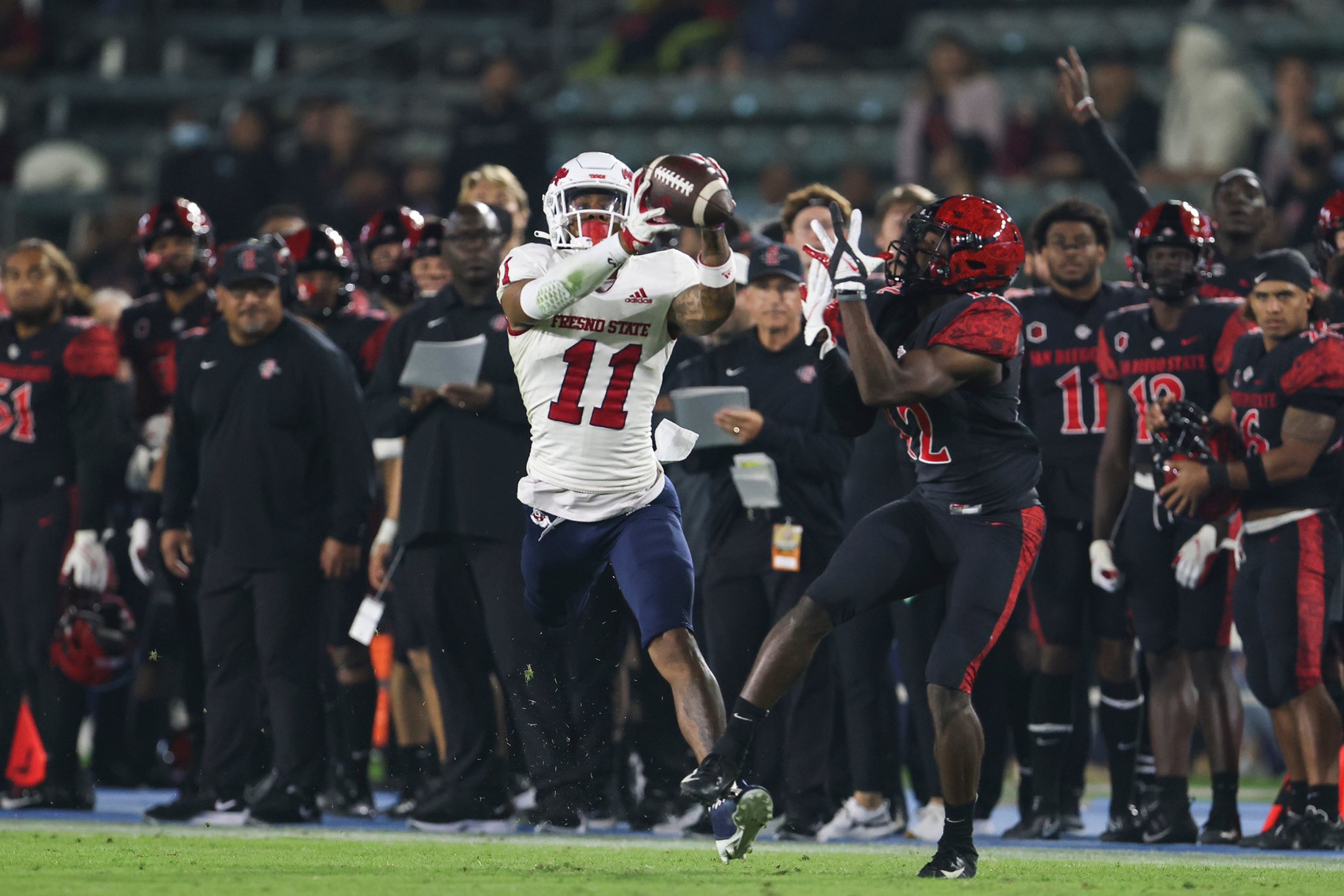 The road to the Mountain West western division championship runs through Fresno.

Fresno State knocked #21/#20 San Diego State from the ranks of the unbeaten with a 30-20 victory, Saturday night in Carson, California. With the win, the Bulldogs (7-2, 4-1 Mountain West Conference) are in sole possession of the division with three conference games remaining.

The Bulldogs also regained possession of the Old Oil Can trophy.

“Awesome atmosphere, a huge team win for us, just from the defense, really doing a great job,” head coach Kalen DeBoer said after the game. “I think the physicality we brought right off the bat kind of set the tone.” 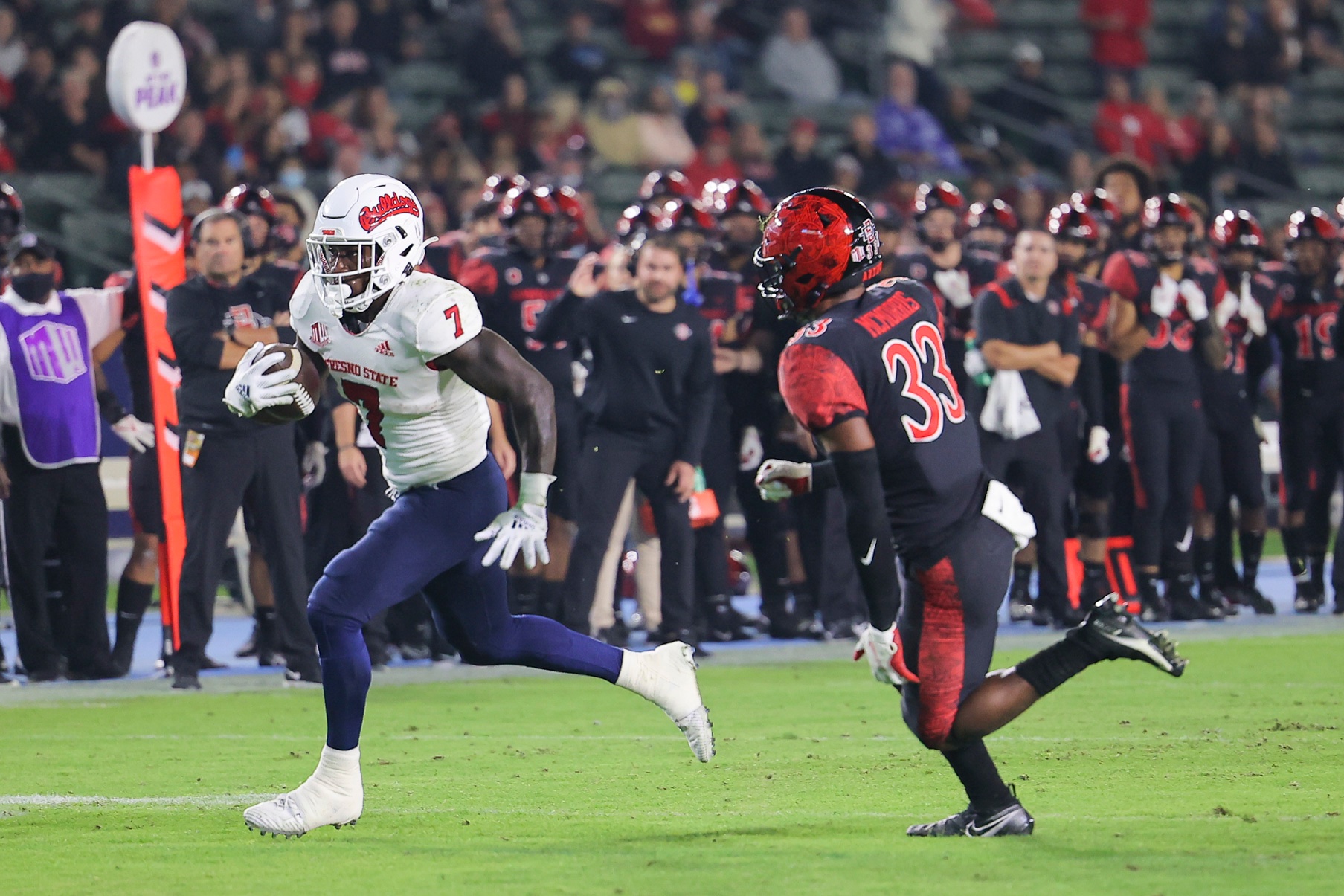 The Bulldogs had to win the field position battle. Irrelevant.

Quarterback Jake Haener returned to putting up Jake Haener-type numbers. He passed for 306 yards, with 1 touchdown on 25-for-42 throwing. He showed resiliency, taking multiple hits during the game. Even when a penalty wiped out a long gain in the first half, he found Josh Kelly on a 69 yard pass on the next play. It was one of four consecutive scoring drives in the first half.

“I got hit a couple of times pretty good. I’m definitely going to be feeling it in the morning. That’s football, got to keep playing with the punches. I’m just glad we got the win,” Haener said post-game.

Starting in place of an injured Ronnie Rivers, running back Jordan Mims set a personal rushing best for the second consecutive week, with 186 yards and two touchdowns.

And, for the second consecutive week, the Bulldogs defense bent but did not break. Top Aztec running back Greg Bell was shut down for much of the first half, and only came alive with his expected bursts of power midway through the third quarter. Lucas Johnson, the quarterback, led the San Diego State rushing attack for much of the game. Bell and Johnson finished with 63 and 60 yards respectively.

For a team that ran nearly twice as much as it passed, the Aztecs put the ball in the air a season high 38 times. Heading into the game, San Diego State averaged 200 rushing yards a game. Against the Bulldogs, they gained 165.

The Bulldogs defense forced two Johnson interceptions, including a first quarter pick halting any Aztec momentum. Three plays after allowing a 39-yard pass, safety Evan Williams made up for it with his third interception of the year. He also batted away a two-point conversion late in the third quarter.

In all, San Diego State turned over the ball three times, setting up 15 points off turnovers.

The Aztecs offense crossed midfield or better 11 times on 14 drives. But it only managed three scores. Because San Diego State was constantly in Fresno State territory, it neutralized Matt Araiza, the top punter in the nation. He didn’t need to flip the field, but did have five of his six punts inside the 20. 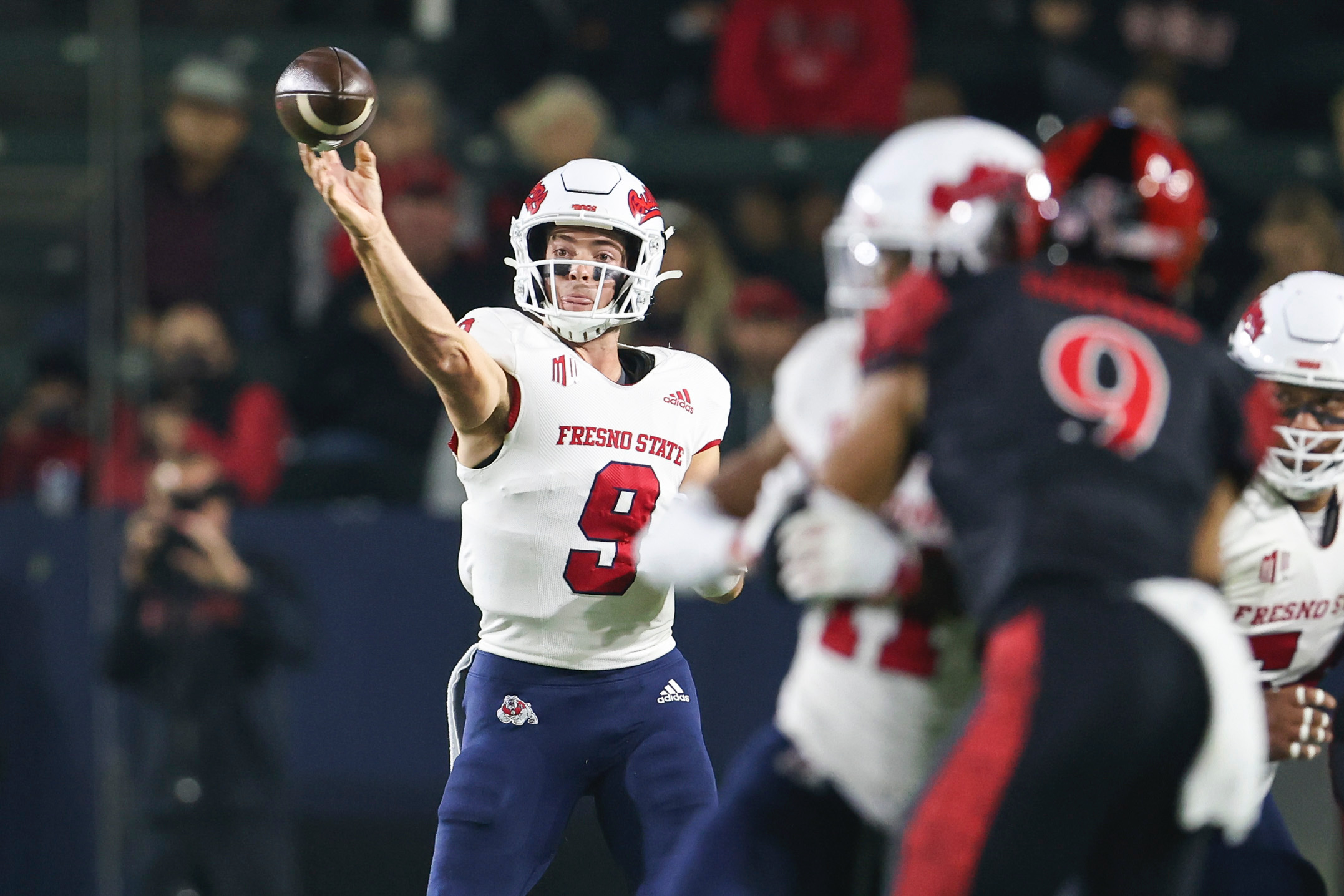 Jake Haener passed for more than 300 yards and a touchdown in a 30-20 victory at San Diego State. (Fresno State athletics/Samuel Marshall Photography)

The Bulldogs suffered a double whammy on a would-be first down in the third quarter. Haener completed the 21-yard pass to Jalen Cropper, who apparently hurt his right knee toward the sideline. Cropper fumbled the ball, as the Aztecs recovered. He was carted off the field, ruled out for the remainder of the game. He later returned to the sideline, but with the knee taped up.

Cropper’s condition will be evaluated on Sunday.

“Definitely a kind of a freakish play. Things are going really good and and just I don’t even know exactly how it happened. He planted his foot, slipped… So I just know that he’s in pain.”

DeBoer praised others who picked up the slack.

With a second victory over a Top 25 team this season, could Fresno State return to the rankings?

“We just beat a Top 25 team and we’ve shown we can we can do that,” DeBoer said. “We got to keep the pedal down and it will take care of itself. If we don’t get in this week, if we keep winning, it will happen. So I think we’re a very good football team. I really do.”

Several teams in the lower half of the AP rankings lost, allowing for a possible opening for the Bulldogs.

Fresno State spent two weeks in the Top 25, peaking as high as 18.

Boise State Up Next

Fresno State running back Ronnie Rivers missed the game, out with a lower leg injury. Rivers suffered the malady last week during his 64-yard touchdown run versus Nevada.

The start of the game did not air on CBS Sports Network because the previous game, Boise State at Colorado State, went long. Even finding the game online through the network’s website could be a challenge. The network picked up the games 20 minutes later, about halfway through the first quarter. The superimposed yellow first-and-ten line, a modern-day TV football staple, was seen intermittently.