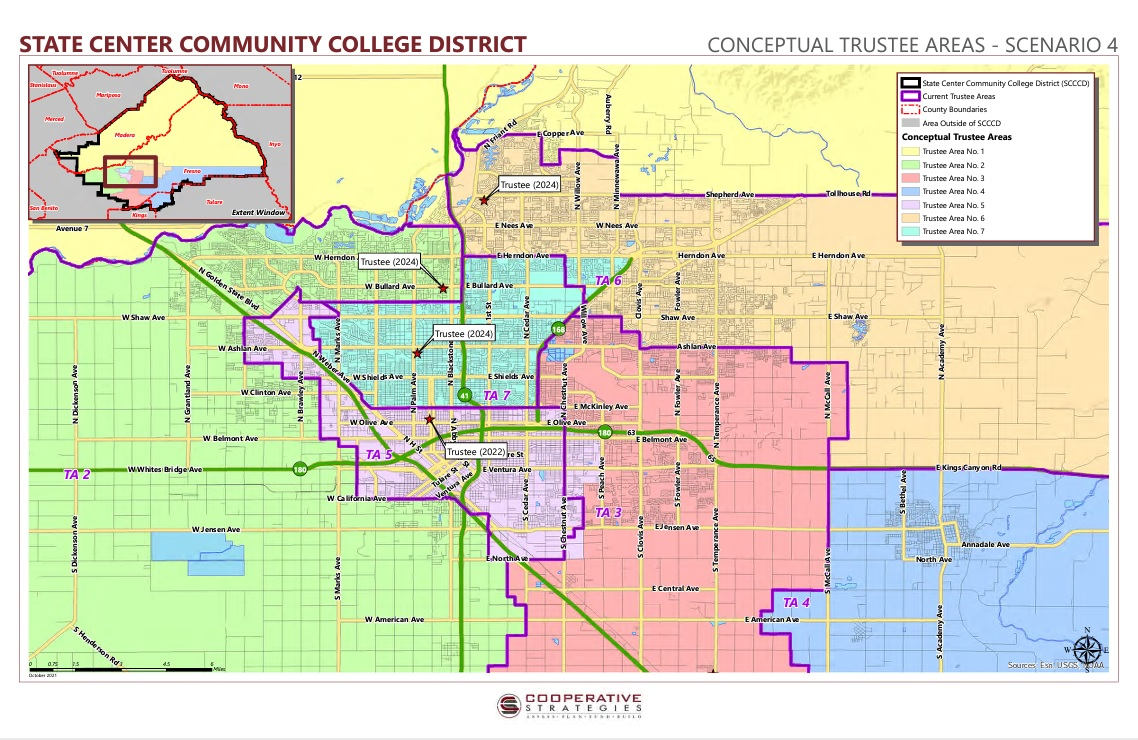 Growth northward in Fresno and in Clovis has created a significant imbalance among the seven State Center Community College District areas.

The district, which stretches from near Yosemite southward into Kings County, is preparing redistricting models that will help even out the trustee areas.

But proposed revisions, which trustees will review Tuesday and the public can learn more about at town hall meetings in November and December, would affect only residents of Fresno or county islands in the city.

Unlike school districts, where trustee areas closely follow the lines of school attendance areas, residents within the district are not constrained to attend the nearest campus, although they typically do.

Area 6, which is represented by Trustee Deborah Ikeda and covers northeast Fresno and Clovis, would lose some acreage in the four scenarios, although that area would both lose and gain ground in Scenario 3.

In all four proposed scenarios, there would be no boundary change for Area 1, which is represented by Trustee Bobby Kahn. That area, the district’s largest geographically, takes in most of Madera County and the northernmost part of Fresno and Fresno County north of Shepherd Avenue and of Copper Avenue to the west.

Scenario 1, with the second-largest variance of 3.8%, would require few changes to boundary lines. In that scenario, a portion of Area 6 north of Herndon Avenue and east of Highway 41 to Willow Avenue would be moved into Area 7, the central Fresno district represented by Trustee Richard Caglia.

Meanwhile, a section between Weber and Marks avenues would shift from Area 5, the central-west Fresno area represented by Board President Annalisa Perea, to Area 7. Area 7 would also expand to the southeast past Olive Avenue to Peach Avenue, but the southernmost neighborhoods south of California Avenue would shift to Trustee Area 3, represented by Trustee Danielle Parra. 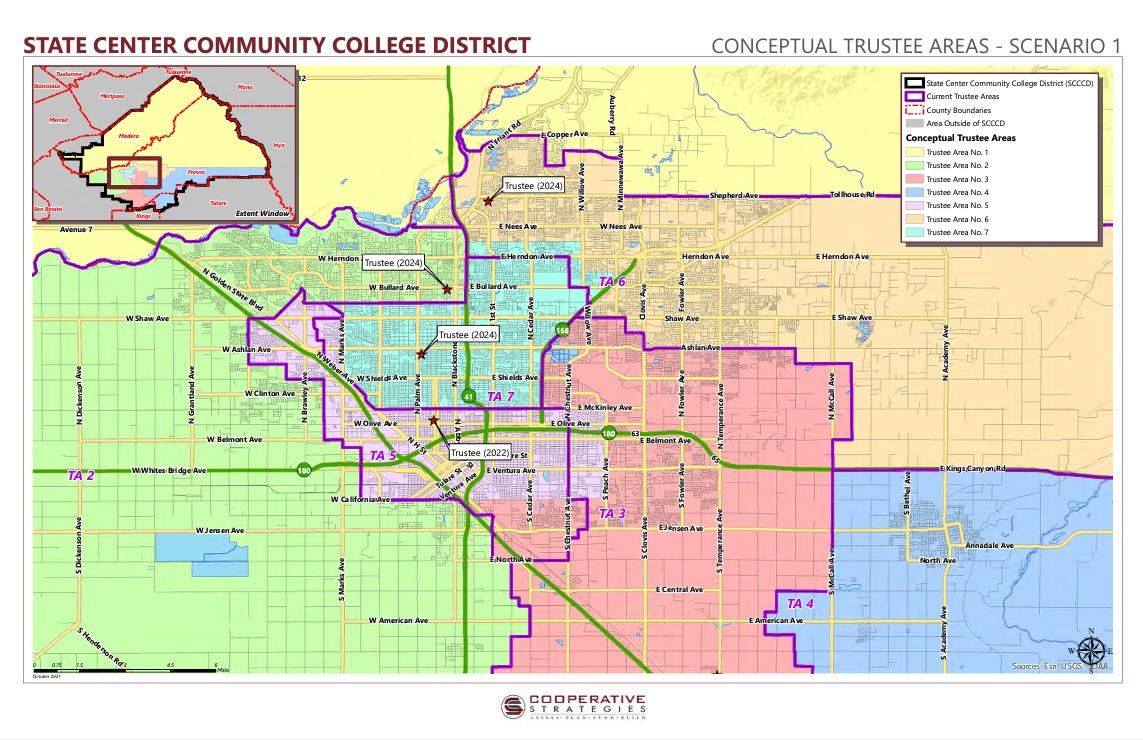 Scenario 2: Area 5 Would Take in More of West Fresno

This scenario, with a slightly lower variance of 3.5% from the ideal trustee area population, would move a portion of Area 6 south of Herndon and west of Highway 168 into Area 7.

The northwest portion of Area 5 would shift into Area 2, which is represented by Trustee Nasreen Johnson. Area 5 would extend westward farther into west Fresno, extending south of Shields to Highway 180 and a few blocks south of California Avenue.

Area 5 also would spread eastward from Chestnut Avenue to Peach Avenue, taking up a portion of Area 3. Meanwhile, Area 3 would take up the section now in Area 5 north of Jensen Avenue as well as a slice of Area 2 along East Avenue south of North Avenue. 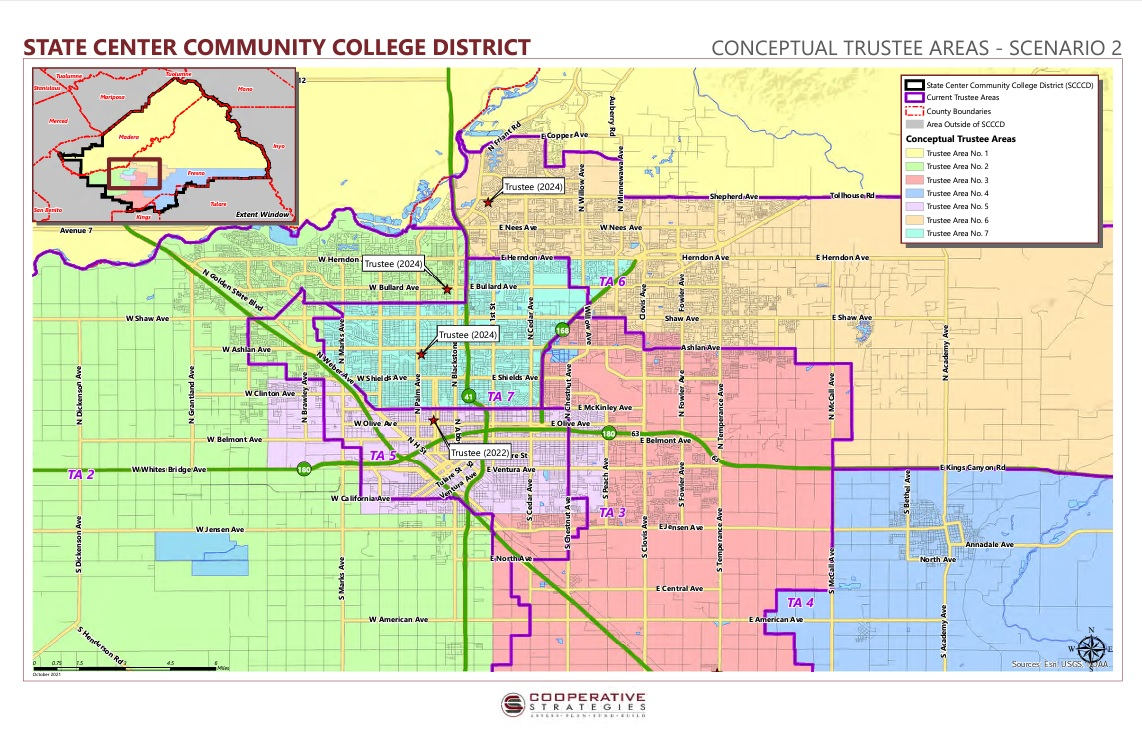 Scenario 3 would have the smallest variance at 2.3%. In this proposal, Area 7 would extend eastward into Area 6 from Herndon Avenue to Shaw Avenue between Chestnut and Willow avenues and then just east of Minnewawa Avenue in Clovis. Area 6 would gain a section south of Ashlan Avenue between Highland and Del Rey avenues south of Highway 180 that’s now in Area 3.

South of Highway 180, a section between Highland and McCall Avenues south to Central Avenue, and then west to DeWolf Avenue and southward would shift from Area 3 to Area 4, which includes east-central and southeast Fresno and is represented by Magdalena Gomez. Area 3 would pick up a section of Area 2 from Cedar Avenue Avenue to Highway 41 south of Church Avenue. Area 3 also would pick up a portion of Area 5 from Church to North avenues and Willow to East avenues.

Area 5 would gain a few blocks from Area 2 north of Shields Avenue from Polk to Blythe avenues and a few more blocks south of Bullard and Barstow avenues between Polk and Valentine avenues. Area 5 also would pick up a section of Area 7 south of Shaw between Valentine and Marks, then south of Ashlan east to West Avenue and south to McKinley Avenue. 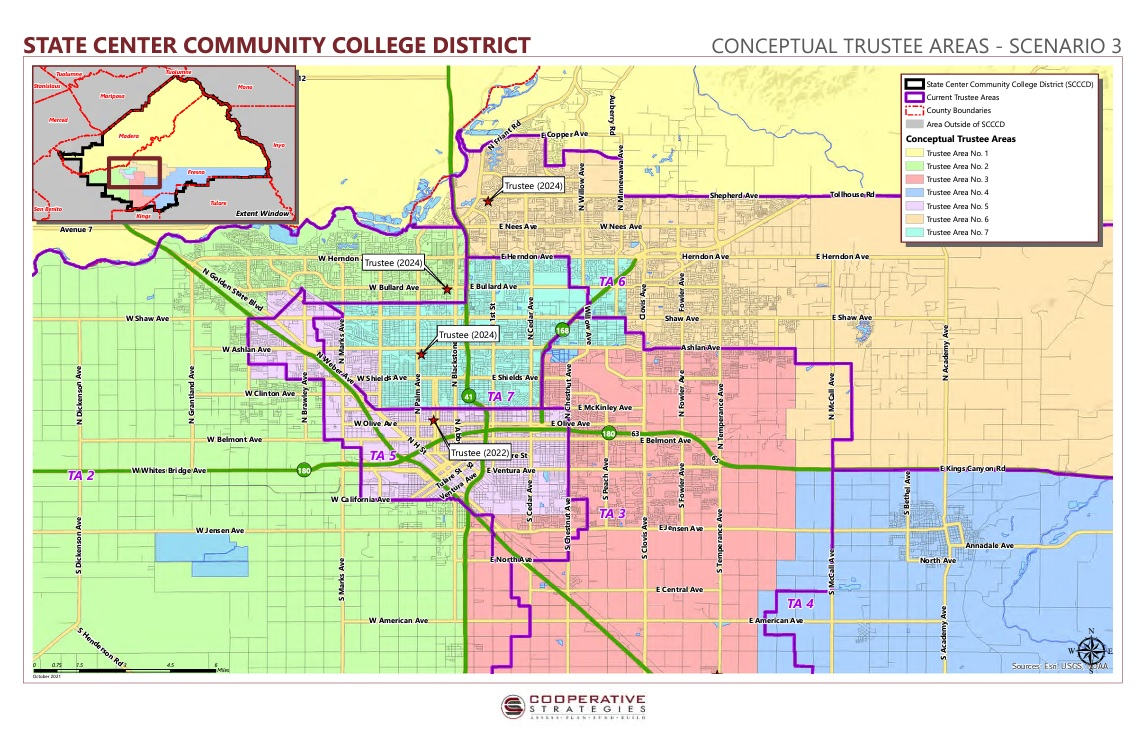 Scenario 4 would require only a few boundary line shifts but would have the largest variance at 5.7%. Similar to Scenario 2, a portion of Area 6 south of Herndon and west of Highway 168 would move into Area 7.

Meanwhile, Area 5 would gain a portion of Area 3 south of Highway 180 to North Avenue from Chestnut Avenue to Willow Avenue, and from Highway 180 south to Butler Avenue between Chestnut and Peach avenues.

In each of the scenarios, the residences of the current trustees would be maintained within the areas they now serve. Perea, however, has declared her candidacy for Fresno City Council in 2022.

A trio of candidates have filed their campaign finance documents to run for the Area 5 seat: Destiny Rodriguez, Gilbert Felix, and Heather Brown.

State Center trustees are scheduled to review the redistricting proposals at Tuesday’s board meeting. In addition, the district has scheduled two town hall meetings for the public to comment on the proposals and suggest revisions.

The public may email questions or comments regarding trustee area boundary adjustments to Ethel Meyer at ethel.meyer @scccd.edu.

The board is scheduled to vote on the final redistricting map in early 2022.

Have an Opinion on Proposed West Herndon Costco? Here’s Your Chance to Weigh In.