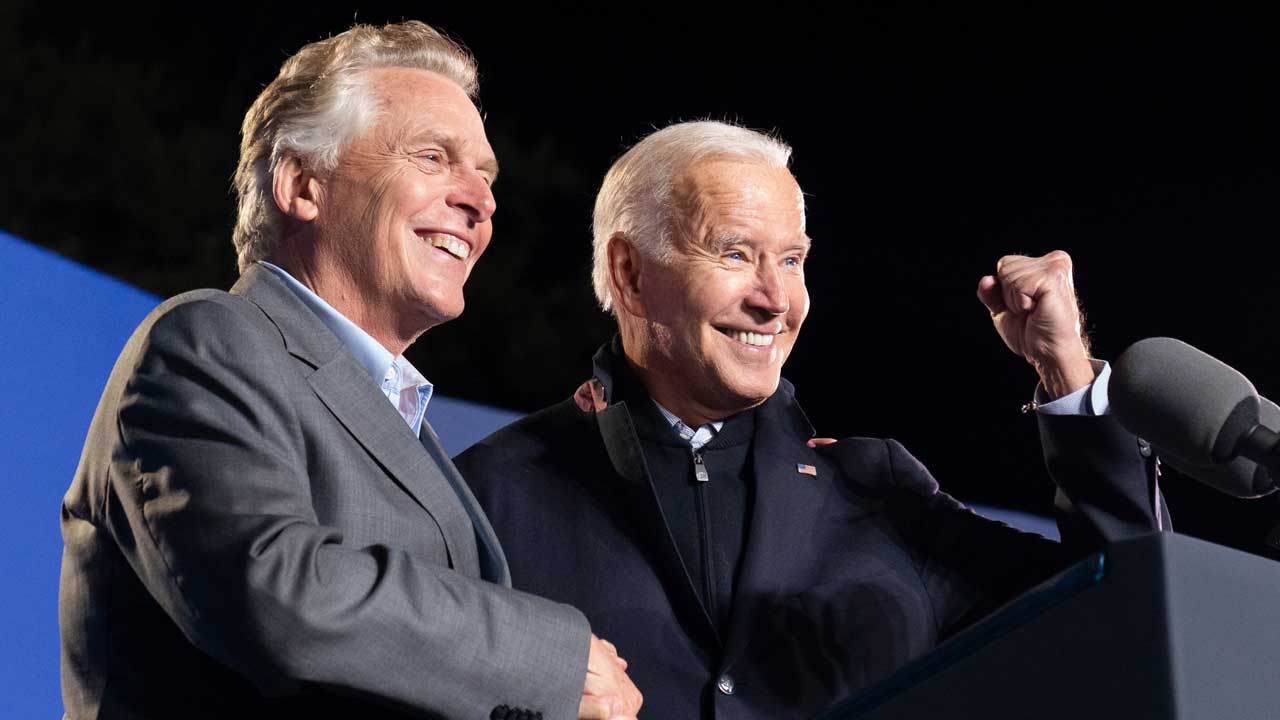 ROANOKE, Va. — As Terry McAuliffe made his case for the Democratic nomination for governor of Virginia this summer, he argued the state wanted “seasoned” leadership. The former governor, like the new President Joe Biden, had broad appeal that would keep up Virginians’ enthusiasm for voting against Republicans, his campaign argued.

Less than a week before Election Day, even McAuliffe’s allies are wondering if he was wrong.

The Democrat is locked in a dead heat against a political neophyte who is threatening to become the first Republican to win statewide office here in more than a decade. This, in a state Biden won by 10 percentage points last year.

Publicly, McAuliffe is confident in his campaign against Republican businessman Glenn Youngkin, but the finger-pointing and handwringing has begun among Democrats who are openly contemplating the possibility of a worst-case scenario on Nov. 2.

“Everybody is nervous,” said Abbi Easter, who lives in the Richmond suburbs and sits on the state Democratic Party’s steering committee.

McAuliffe’s team privately points to the drag of Biden’s weakened standing among Virginia voters, a shift that began in August after the U.S. withdrawal from Afghanistan. That exacerbated traditional headwinds for candidates whose party occupies the White House. In 2013, McAuliffe himself became the first Virginia candidate in 40 years to win the governor’s office while his party was in power.

McAuliffe allies also suggest they may have underestimated the extent to which his status as an experienced politician may hurt him in a political environment that continues to favor outsiders. Even before becoming governor, McAuliffe had been active in national politics for decades. He served as a former Democratic National Committee chairman and a chief fundraiser for Bill and Hillary Clinton.

Loss Could Trigger Panic Among Democrats

A McAuliffe loss on Tuesday would reverberate across the national political landscape, likely triggering all-out panic among Democrats. For Republicans, it would be a burst of confidence and a roadmap for finding their way through post-Trump divisions ahead of 2022 midterm elections, which will decide control of Congress and dozens of state capitals.

In the 2021 election’s closing days, one McAuliffe aide conceded Republicans are more excited about scoring a dramatic upset that would send a message to the country than Democrats are about preserving the status quo — especially as many polls suggest that voters believe the country is on the wrong track.

“You don’t have to be enthusiastic to go to the doctor or the dentist to still do it every single year,” Hurst said. “It’s time for us to go out and do our jobs.”

While history is not on his side, some of McAuliffe’s challenges are of his own making.

In the final debate against Youngkin late last month, McAuliffe’s answered a question about parents’ efforts to ban some books from school libraries.

“I don’t think parents should be telling schools what they should teach,” McAuliffe quipped.

The comment played into Youngkin’s push to win over a crucial bloc of suburban voters, who shifted sharply away from the GOP during Donald Trump’s presidency. Youngkin’s team immediately began running attack ads highlighting the comment as part of a “Parents Matter” campaign.

The education debate turned to an overt play to energize Youngkin’s far-right base, however, when he released a new television ad featuring a mother who sought to have the book “Beloved” banned from classrooms in suburban Washington. The acclaimed 1987 novel by Nobel laureate Toni Morrison is about an escaped slave who kills her infant daughter rather than allowing the girl to be returned to the plantation.

The intensifying messages have been amplified by the massive sums of money each of the candidates has raised and spent — most of it on television ads.

Each candidate has raised more than $58 million in the election so far, according to the most recent campaign finance reports. The combined $117 million raised nearly doubled the previous record for a Virginia governor’s election. Youngkin, a wealthy former private equity executive, has lent his campaign $20 million from his personal fortune, according to the Virginia Public Access Project.

McAuliffe’s team decided long ago to devote the bulk of his fundraising haul to a message focused on national issues — specifically, Trump — instead of his accomplishments while governor, which included a strong state economy and a surge in funding for education. McAuliffe often mentions such governing accomplishments at his events on the campaign trail, but his television commercials, which is how most voters interact with the campaign, have most recently been aimed at tying Youngkin to Trump and the GOP’s push to curtail abortion rights.

Easter said it remains to be seen whether Democrats can still win by embracing an anti-Trump message now that he is no longer in office.

Some issues in the race have been out of McAuliffe’s control.

The surge of the delta variant over the summer boosted support for McAuliffe’s strict approach on vaccines and other public health measures, including mask mandates. The Democrat used the issue to link Youngkin to Trump and other GOP leaders who have resisted the federal Center for Disease Control’s recommendations.

Youngkin’s team privately acknowledged in the early fall that the pandemic focus was hurting his campaign. But as COVID cases declined in the weeks leading up to the election, voters’ focus shifted elsewhere — including toward Washington.

Few Democrats on the ground here believe that the Democratic-controlled Congress’ inability so far to enact Biden’s sweeping agenda is a defining issue in the Virginia contest, but it is certainly not helping as McAuliffe struggles to give Democratic voters something to get excited about.

“You know how we get. I do this, too,” she said. “We wring our hands a little bit. Look, we always knew this was going to be a tough race, right? We got a lot on the line here.”