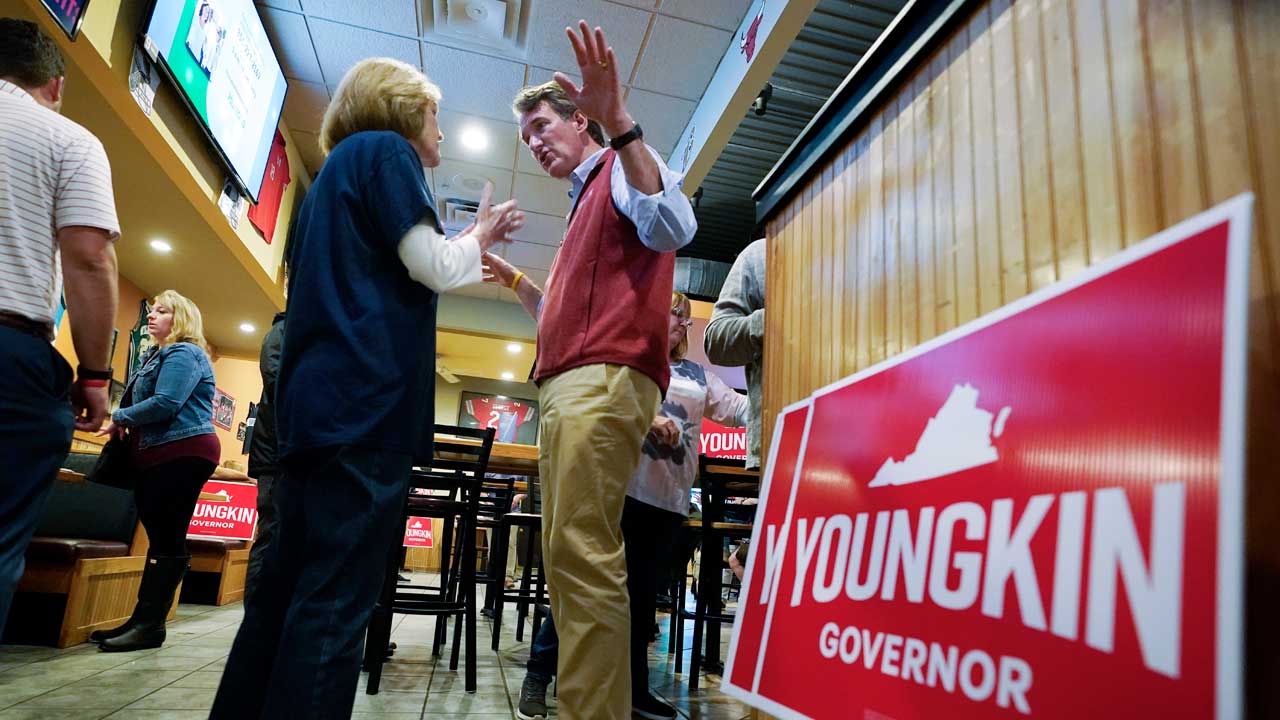 ASHLAND, Va. — Glenn Youngkin wants voters in Virginia to hear an urgent message: Your children are in danger.

In a speech in Northern Virginia’s suburbs last week, the Republican candidate for governor highlighted the murky case of a student who allegedly committed sex crimes in two area schools. He said the incidents, which have sparked community outrage, are the result of failed Democratic leadership.

“What other tragedy awaits Virginia’s children?” an atypically grim-faced Youngkin asked from the podium, flanked by a collection of parents and schoolchildren.

On the eve of the Nov. 2 election, Youngkin’s dark message represents a new front in his monthslong push to repair the Republican Party’s standing in the suburbs, where college-educated moms and dads forcefully turned against Donald Trump’s GOP.

Shying away from Trump and his divisive rhetoric for much of the year, Youngkin has adopted a suburban strategy that instead emphasizes an approachable image and “kitchen table” issues like taxes, public safety and education. He’s also tried to link his education platform to the frustrations of Virginia activist groups — many of them run by officials with former ties to the Trump administration, the Republican Party or both — already upset by school coronavirus pandemic restrictions and transgender policies, as well as classroom curricula they see as too liberal and un-American.

Youngkin’s final-days focus on sexual predators in schools, hardly a widespread issue, will test the limits of his suburban outreach and provide lessons for Republicans aiming to retake control of Congress next year.

Tactic Could be Model for Races in Other States

In competitive suburban districts from California to Connecticut, Republicans are heading into the midterms searching for a post-Trump playbook to rebalance the political landscape. If Youngkin wins, many GOP candidates will likely embrace his rhetoric. A loss, however, could signal that the hard-line approach has limited appeal beyond the Republican base.

Less than two weeks before Election Day in Virginia, there are signs that Youngkin’s strategy is working.

Democrat Terry McAuliffe’s campaign privately concedes the race is a toss-up, despite built-in advantages in a state President Joe Biden carried by 10 percentage points last fall. New polling from Monmouth University, which has the race tied, suggested that Youngkin may be gaining some support among those deciding between the two candidates in the final months of the campaign, including in the Northern Virginia suburbs.

Patrick Murray, director of the independent Monmouth University Polling Institute, also cited a shift in voters’ top issues away from the pandemic, which tends to favor Democrats, and toward the economy and education, where the politics are murkier.

McAuliffe’s fight to maintain his party’s advantage with suburban voters has centered on linking Youngkin to Trump, who was twice rejected by Virginia voters. McAuliffe released an ad this week in which his opponent and Trump use nearly identical language. While Trump has endorsed Youngkin and the two share positions on several policies, the Virginia Republican has spent millions of dollars from his personal fortune on television ads defining himself as a moderate Republican businessman.

Youngkin chief strategist Jeff Roe says the campaign has targeted a universe of roughly 15% of the electorate that he calls “Peloton dads and soccer moms,” a group of persuadable independents that tend to be college-educated, white and suburban. To reach them, Youngkin has rolled out a consistent advertising strategy and campaign events focused on local issues.

McAuliffe “is running a campaign on issues nobody’s talking about and running against somebody who’s not on the ballot. No wonder he’s not doing well,” Roe said. “We’re talking to people about issues they care about and we’re running against Terry McAuliffe.”

Some Democrats are concerned.

In the Richmond suburbs, Alsuin Preis, a member of the Henrico County Democrats executive committee, said she’s skeptical Youngkin will sway many Democratic women, but she worries he might appeal to anti-Trump Republicans. She has noticed a surge of Youngkin yard signs in her neighborhood, a swing district that shifted blue after Trump’s election.

“Glenn Youngkin has given them permission to not be ashamed anymore,” she said of her Republican neighbors.

Two decades ago, George W. Bush focused on education to portray himself as a “compassionate conservative.” Youngkin is trying to do the same by talking up his own plans to raise teacher pay and boost education spending. Both are also McAuliffe priorities.

But a pair of recent cases of alleged high school sexual assault have allowed Youngkin to connect his education platform to the prospect of violence in schools.

The first occurred in a restroom at Stone Bridge High School in Ashburn, in Northern Virginia’s Loudoun County, on May 28. The father of the victim was arrested during a school board meeting the following month, as officials were discussing transgender school bathroom policies, after an altercation with another parent. On Oct. 6, a separate incident occurred at Broad Run High School, about 3 miles (4.8 kilometers) from Stone Bridge.

The Loudoun County Sheriff’s Office said in a statement that a 14-year-old male was arrested in connection with the May 28 assault and charged with two counts of forcible sodomy. Police have since announced that the same suspect has been charged with sexual battery and abduction of a fellow student in the Oct. 6 incident.

Youngkin’s decision to address the incidents during the closing days of his campaign does carry risk. On Friday, the state police confirmed it was investigating multiple threats against a county prosecutor, who criticized Youngkin in a TV interview for “inflaming” the community.

Youngkin’s Campaign Presents Issue as Sticking Up for Parents

Still, the cases have supplemented what Youngkin’s campaign already saw as an issue of strength during the race’s home stretch: standing up for parents.

“It’s less about ideology. Now we’re talking about a parent’s role as it influences the safety of their child,” said Alleigh Marré, a Virginia mother and former Trump administration staffer who leads an organization called Free to Learn Coalition. “I think most parents, when they look at what occurred in Loudoun, they see a father who was sticking up for his daughter who was a survivor of sexual assault and yet the repercussions came back to the dad.”

Earlier this year, her group spent heavily on ads criticizing school districts in Virginia, New York and Arizona for politicizing classrooms. This past week, its political advocacy arm, Free to Learn Action, announced a $1 million-plus buy on digital and television advertising statewide in Virginia that will run through Election Day and aims to expose school “policies that would silence parents,” while highlighting McAuliffe’s debate comment that parents shouldn’t tell schools what books to teach.

On the ground in northern Virginia, Briana Howard, a 32-year-old mom of a second grader in Fairfax County schools, said her family struggled during last year’s classroom closures. She supported them initially, but felt they went on for far too long.

Howard said she typically votes for Democrats and voted for Biden last year but is supporting Youngkin because of his stance on education and her frustration with Democrats, who she feels have catered to teachers unions instead of families.

She attended one of Youngkin’s recent rallies and described being “very moved” to hear that he was taking the alleged sexual assaults seriously and demanding an investigation.