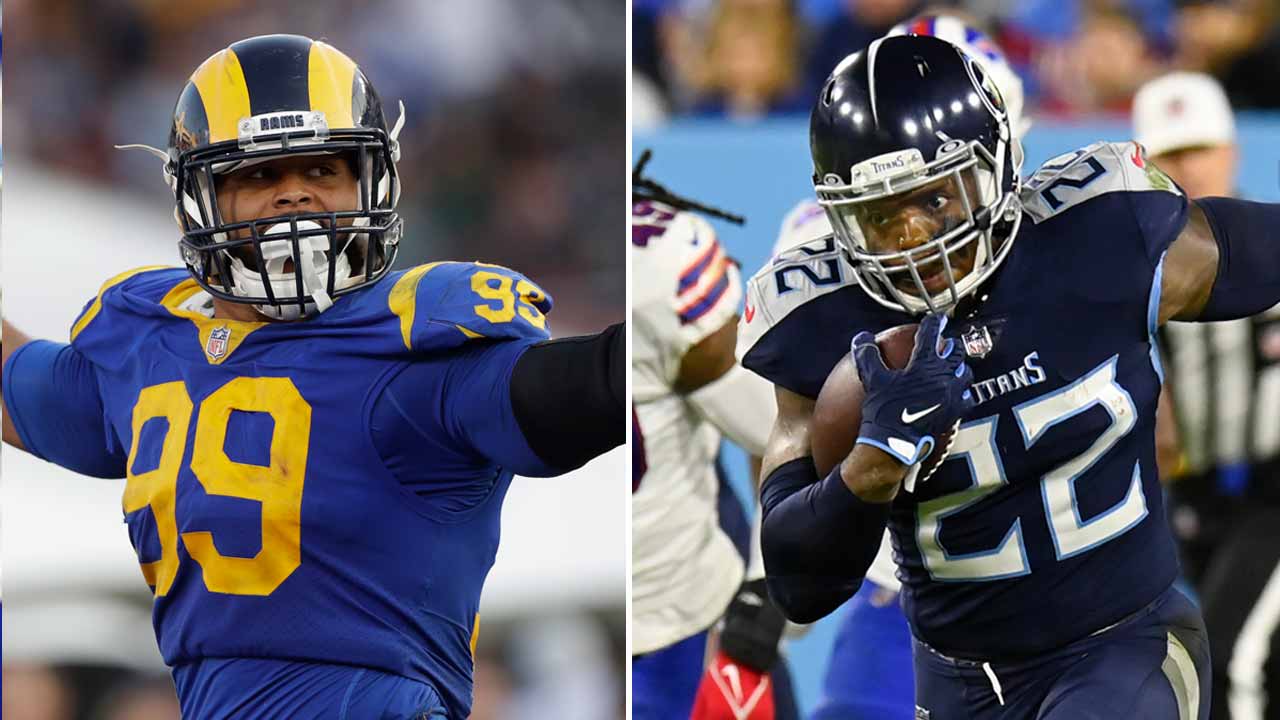 This might be the age of the quarterback, but Aaron Donald (left) and Derrick Henry are the NFL's two most dominant players. (AP File)
Share with friends

Mark your calendar for Sunday, Nov. 7, because that’s when the NFL’s two most dominant players will collide — possibly triggering an earthquake.

The Tennessee Titans will play at the Los Angeles Rams in front of NBC’s Sunday Night Football cameras. Meaning: Titans running back Derrick Henry squares off against Rams defensive tackle Aaron Donald in a matchup of two certain Hall of Famers.

As we saw on Monday night, there’s no running back now — nor in NFL history — that combines Henry’s brawn and speed.

On his 76-yard touchdown against Buffalo, the 6-foot-3, 247-pounder reached 21.8 miles per hour. That’s the fastest in the league this year. And, at his quickest on that run, he covered 32 feet a second. Looking at it another way, that’s more than the distance required for a first down in a single tick of the second hand on your watch.

What makes Henry so special is that he can bull his way into the end zone from a yard or two out, or he can take it all the way to the house from 99 yards away — as he did in 2018. Now, in his sixth season, Henry has 99 career rushing TDs and a scoring run of at least 74 yards every year except his rookie campaign.

Some backs pile up big yards in meaningless games, but Henry totaled 143 yards rushing and three touchdowns in a must-win game for the Titans against a Buffalo team known for toughness and pride in its defense.

There’s no way that a human being as massive as Donald should be so quick. Combine these unique physical attributes with a high motor and a determination to win and the result is a superstar who doesn’t take a down off. That’s rare in the NFL, where Pro Bowlers often coast when the game’s out of hand or sometimes don’t show up at all on a given Sunday.

Aaron Donald out here having a field day already.pic.twitter.com/YcEjYQTASp

The Rams No. 99 has been the AP Defensive Player of the Year three times. He’s led the league in tackles for a loss twice and sacks once. And, he has been first-team All-Pro six times.

Donald Is an Offensive Coordinator’s Nightmare

But the numbers and the awards don’t tell the whole story about Donald’s impact. He’s all that offensive coordinators think about the week they play the Rams. If you ask an offensive lineman to single-block him, Donald’s going to ruin your day. Double-block or triple-block him and other Rams defenders are free to shut down the play.

A natural question is, have Henry and Donald tangled before?

In 2017 — Henry’s second season — the Titans hosted the Rams on Christmas Eve. Henry was the backup to DeMarco Murray and together they combined for 73 yards on 23 carries, a miserable average of 3.2 yards, in a 27-23 Rams’ win.

Donald had two tackles and forced a fumble. But, with the Titans double-teaming Donald, linebacker Corey Littleton had seven tackles, a sack, an interception, and two QB hits in what might have been the best game he’s ever played.

Four seasons later, Donald and Henry are at the top of their games. Come Nov. 7, kick back and enjoy the paradox of an unstoppable force meeting an immovable object.

1. Arizona (6-0) — Head coach sidelined on short notice by a positive COVID test? That didn’t slow down QB Kyler Murray as he threw for four TDs in a blowout of Cleveland. (Last week: No. 2)

2. Buffalo (4-2) — The Bills got gashed by Derrick Henry, which is pretty much a regular event in the NFL. There will be a return to business-as-usual for Buffalo on Sunday against the reeling Dolphins.  (Last week: No. 1)

3. Los Angeles Rams (5-1) — QB Matt Stafford faces Jared Goff in a Trading Places matchup against the Lions. The only question is whether coach Sean McVay slams down his headset if the Rams lead by less than four TDs at halftime. (Last week: No. 3)

4. Dallas (5-1) — The Cowboys passed the Bill Belichick-at-home test by a whisker last week in overtime. Now Dak Prescott gets a bye week to recover from a strained calf muscle. Talk about perfect timing. (Last week: No. 4)

28. Miami (1-5) — The trend line isn’t good for the Dolphins, who are in their third year of a rebuild under coach Brian Flores and couldn’t even beat Jacksonville. The biggest question: Is Tua Tagovailoa capable of developing into a playoff-caliber QB? 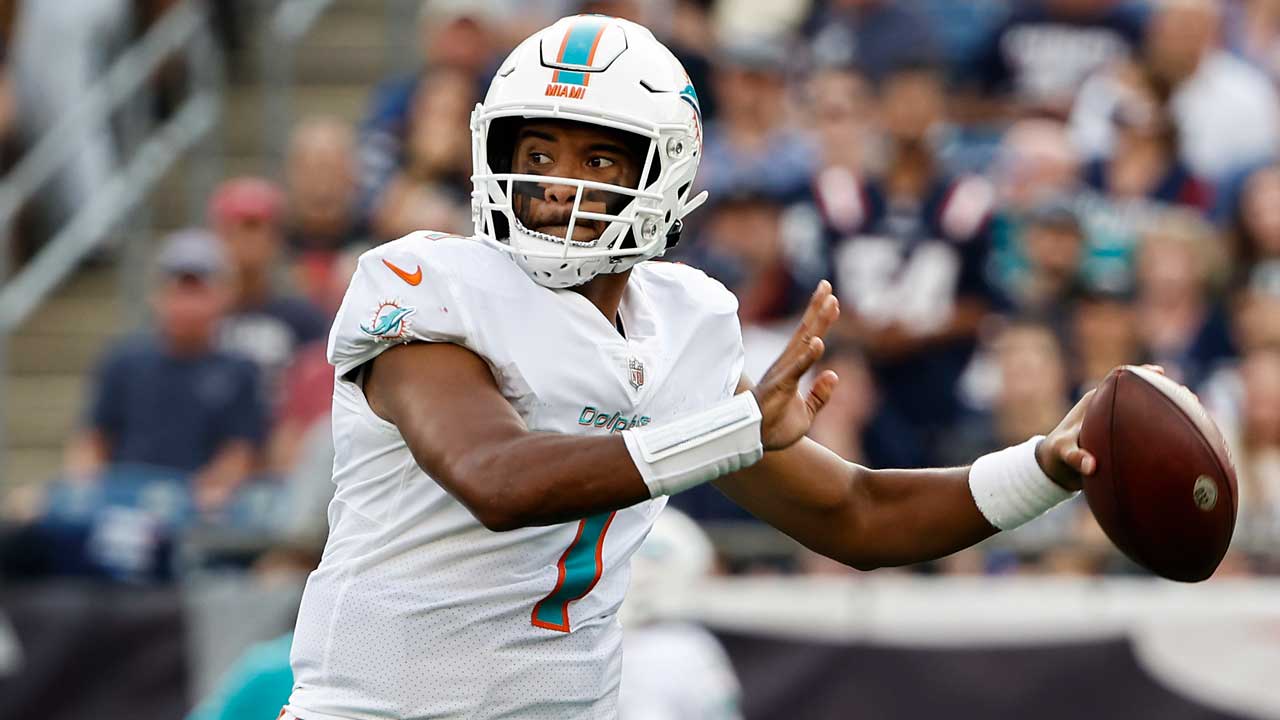 How much longer will the Dolphins give Tua Tagovailoa to demonstrate he’ll become a playoff-caliber QB? (AP File)

29. New York Jets/Giants (2-9) —The Jets had a bye week, giving them two full weeks to prep for a road assignment against a 2-4 Patriots team that desperately wants to make the playoffs. The Giants are 1-5, just as they were last season after six weeks under Joe Judge. Says the coach: “The fish stinks from the head down. … There’s no excuses.”  (Last week: Jets/Giants No. 29)

30. Jacksonville (1-5) — Urban Meyer clearly is more interested in winning games by running the ball than in developing QB Trevor Lawrence. Meanwhile, the Jaguars can proclaim themselves Champions of Florida.

31. Houston (1-5) — The Texans’ ball-control effort failed miserably against Indianapolis in a 31-3 loss. Now they travel to Arizona for another whipping. (Last week: No. 31)

32. Detroit (0-6) —  The Lions started against Cincinnati last Sunday with a three-yard run, an illegal formation, and a false start. Google “long suffering” and you’ll see a picture of Lions fans.  (Last week: No. 30)