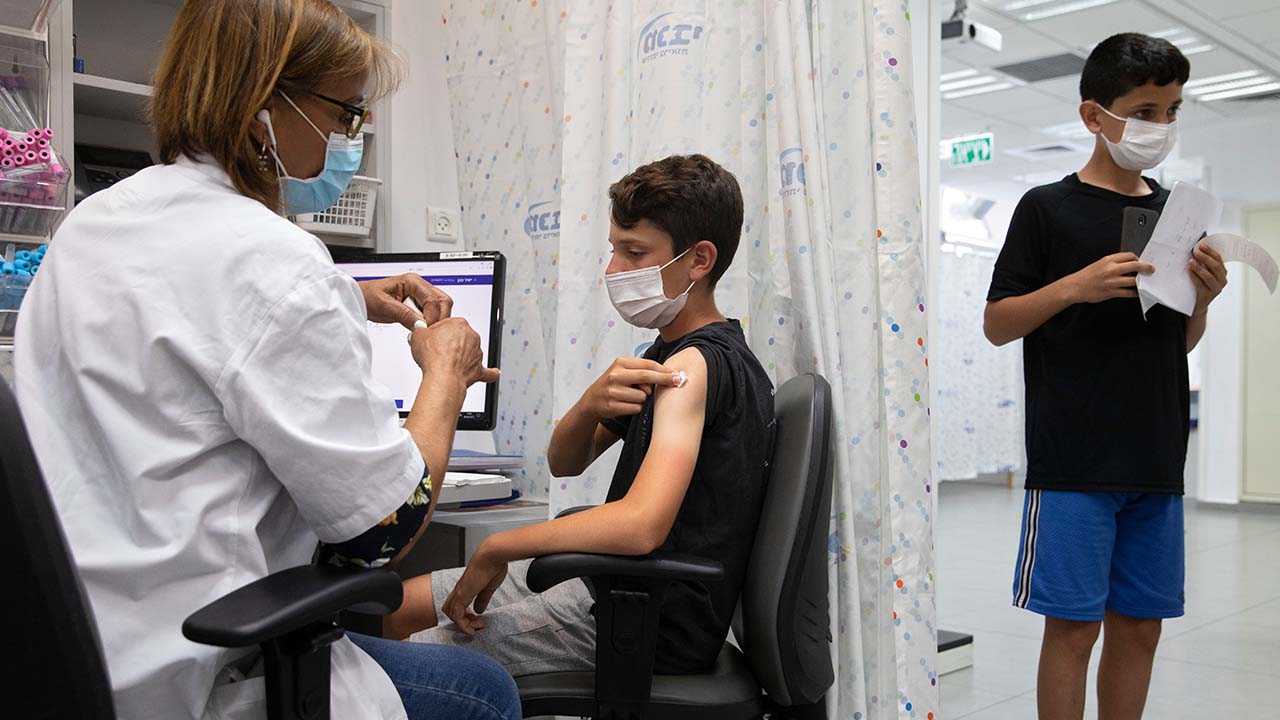 In this June 6, 2021, photo, a youngster receives a Pfizer COVID-19 vaccine in the Israeli city of Rishon LeZion. (AP File)
Share with friends

WASHINGTON — Children ages 5 to 11 will soon be able to get a COVID-19 shot at their pediatrician’s office, local pharmacy, and potentially even their school, the White House said Wednesday as it detailed plans for the expected authorization of the Pfizer shot for elementary school youngsters in a matter of weeks.

Federal regulators will meet over the next two weeks to weigh the safety and effectiveness of giving low-dose shots to the roughly 28 million children in that age group.

Within hours of formal approval, which is expected after the Food and Drug Administration signs off and a Centers for Disease Control and Prevention advisory panel meets on Nov. 2-3, millions of doses will begin going out to providers across the country, along with the smaller needles needed for injecting young children.

Within days of that, the vaccine will be ready to go into arms on a wide scale.

The Pfizer vaccine requires two doses three weeks apart and a two-week wait for full protection to kick in, meaning the first youngsters in line will be fully covered by Christmas.

Some Parents Eager for Kids to Get Vaccinated

Some parents can hardly wait.

Dr. Sterling Ransone said his rural Deltaville, Virginia, office is already getting calls from people asking for appointments for their children and saying, “I want my shot now.”

“Judging by the number of calls, I think we’re going to be slammed for the first several weeks,” said Ransone, president of the American Academy of Family Physicians.

Justin Shady, a film and TV writer in Chicago, said his 6-year-old daughter, Grey, got nervous when he told her she would be getting the shots soon. But he is bribing her with a trip to Disney World, and “she’s all in.’’

The family likes to travel, “we really just want to get back in the swing of seeing the world,’’ Shady said.

As for youngsters under 5, Pfizer and Moderna are studying their vaccines in children down to 6 months old, with results expected later in the year.

The Biden administration noted that the expansion of shots to children under 12 will not look like the start of the country’s vaccine rollout 10 months ago, when limited doses and inadequate capacity meant a painstaking wait for many Americans.

“Getting our kids vaccinated, we have the prospect of protecting them, but also getting all of those activities back that are so important to our children.” — U.S. Surgeon General Dr. Vivek Murthy

The country now has ample supplies of the Pfizer shot to vaccinate the children who will soon be eligible, officials said, and they have been working for months to ensure widespread availability of shots. About 15 million doses will be shipped to providers across the U.S. in the first week after approval, the White House said.

More than 25,000 pediatricians and primary care providers have already signed on to dispense the vaccine to elementary school children, the White House said, in addition to the tens of thousands of drugstores that are already administering shots to adults.

Hundreds of school- and community-based clinics will also be funded and supported by the Federal Emergency Management Agency to help speed the process.

The White House is also preparing a stepped-up campaign to educate parents and children about the safety of the shots and the ease of getting them. As has been the case for adult vaccinations, the administration believes trusted messengers — educators, doctors and community leaders — will be vital to encouraging vaccinations.

Dr. Lisa Reed, medical director for family medicine at MAHEC, a western North Carolina safety net provider that serves patients from rural Appalachia and more urban communities such as the tourist town of Asheville, said it is going to take effort to get some families on board.

Reed said she lives “in a community that has a lot of vaccine hesitancy, unfortunately.”

“Some have lower health literacy or belong to ethnic groups that are more hesitant in general’’ because of a history of mistrust, she said. And Asheville, she said, has a sizeable population of well-educated adults who are longtime vaccine skeptics.

While children run a lower risk than older people of getting seriously ill from COVID-19, at least 637 people age 18 or under have died from the virus in the U.S., according to the CDC. Six million U.S. children been infected, 1 million of them since early September amid the spread of the more contagious delta variant, the American Academy of Pediatrics says.

Health officials believe that expanding the vaccine drive will not only curb the alarming number of infections in children but also reduce the spread of the virus to vulnerable adults. It could also help schools stay open and youngsters get back on track academically, and contribute to the nation’s broader recovery from the pandemic.

“COVID has also disrupted our kids’ lives. It’s made school harder, it’s disrupted their ability to see friends and family, it’s made youth sports more challenging,” U.S. Surgeon General Dr. Vivek Murthy told NBC. “Getting our kids vaccinated, we have the prospect of protecting them, but also getting all of those activities back that are so important to our children.”

Murthy said the administration, which is imposing vaccine mandates for millions of adults, is leaving it up to state and local officials to decide whether to require schoolchildren to get vaccinated. But he said such measures would be “a reasonable thing to consider.”

Home Values in Fresno and US Climb