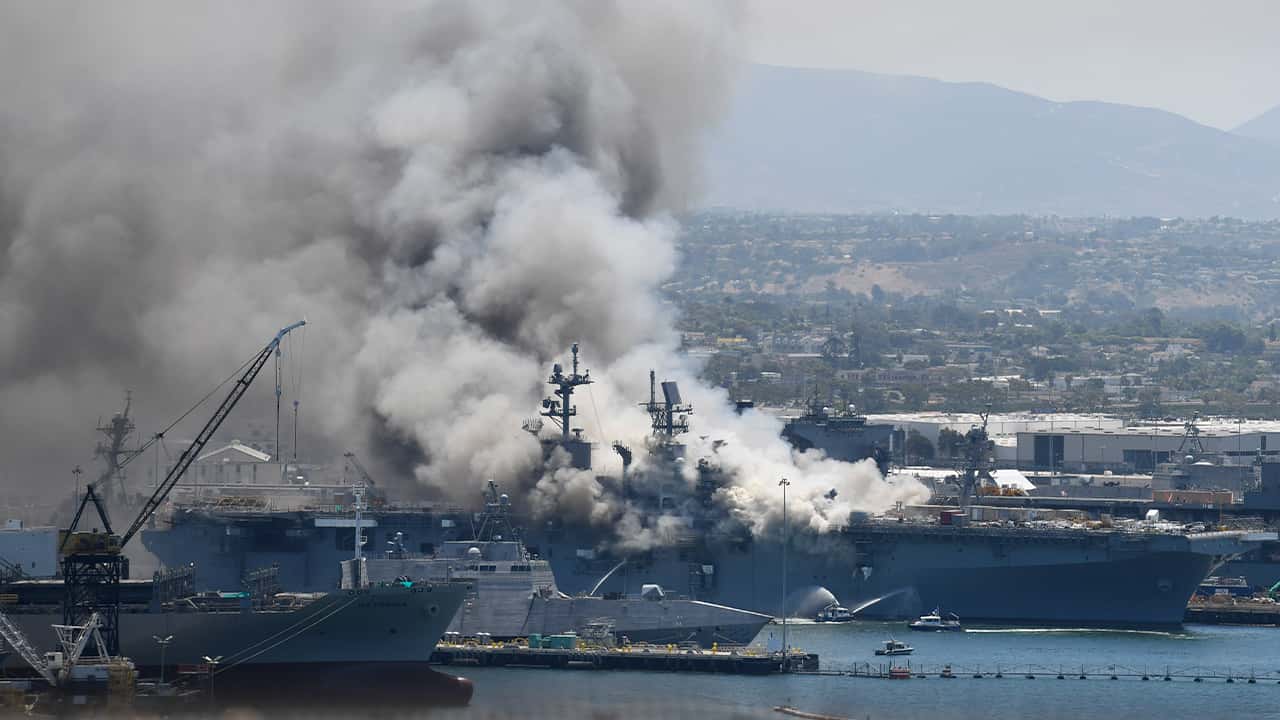 WASHINGTON — A Navy report has concluded there were sweeping failures by commanders, crew members, and others that fueled the July 2020 arson fire that destroyed the USS Bonhomme Richard, calling the massive five-day blaze in San Diego preventable and unacceptable.

Maintenance reports were falsified, and 87% of the fire stations on board had equipment problems or had not been inspected.

While one sailor has been charged with setting the fire, the more than 400-page report, obtained by The Associated Press, lists three dozen officers and sailors whose failings either directly led to the ship’s loss or contributed to it. The findings detailed widespread lapses in training, coordination, communication, fire preparedness, equipment maintenance, and overall command and control.

“Although the fire was started by an act of arson, the ship was lost due to an inability to extinguish the fire,” the report said, concluding that “repeated failures” by an “inadequately prepared crew” delivered “an ineffective fire response.”

It slammed commanders of the amphibious assault ship for poor oversight and said the main firefighting foam system wasn’t used because it hadn’t been maintained properly and the crew didn’t know how to use it.

The report describes a ship in disarray, with combustible materials stacked, scattered, and stored improperly. It said maintenance reports were falsified, and that 87% of the fire stations on board had equipment problems or had not been inspected.

It also found that crew members did not ring the bells and alert sailors that there was a fire until a full 10 minutes after it was discovered. Those crucial minutes, the report said, caused delays in crews putting on fire gear, assembling hose teams and responding to the fire.

Sailors also failed to push the button that would have activated the firefighting foam system, even though it was accessible and could have slowed the progress of the fire. “No member of the crew interviewed considered this action or had specific knowledge as to the location of the button or its function,” the report said.

The report spreads blame across a wide range of ranks and responsibilities, from the now-retired three-star admiral who headed Naval Surface Force Pacific Fleet — Vice Adm. Richard Brown — to senior commanders, petty officers, lieutenants, and civilian program managers. A total of 17 were cited for failures that “directly” led to the loss of the ship, while 17 others “contributed” to the loss of the ship. Two other sailors were faulted for not effectively helping the fire response.

Adm. William Lescher, the vice chief of naval operations, has designated the commander of U.S. Pacific Fleet to handle any disciplinary actions for military members. It’s not clear if any have yet been relieved of command or removed from jobs as a result of the fire.

The report only provides names for senior naval officers. Others were described only by their job or rank.

More broadly, the crew was slammed for “a pattern of failed drills, minimal crew participation, an absence of basic knowledge on firefighting” and an inability to coordinate with civilian firefighters.

The ship was undergoing a two-year $250 million upgrade pierside in San Diego when the fire broke out. About 138 sailors were on board, and nearly 60 were treated for heat exhaustion, smoke inhalation and minor injuries. The failure to extinguish or contain the fire led to temperatures exceeding 1,200 degrees Fahrenheit in some areas, melting sections of the ship into molten metal that flowed into other parts of the ship.

Due to the damage, the Navy decommissioned the ship in April. In August, Seaman Apprentice Ryan Mays was charged with aggravated arson and the willful hazarding of a vessel. He has denied setting the fire.

The blaze began in the lower storage area, which Mays’ duty station had access to, according to a court document. Investigators found three of four fire stations on the ship had evidence of tampering, including disconnected fire hoses, and highly flammable liquid was found near the ignition site.