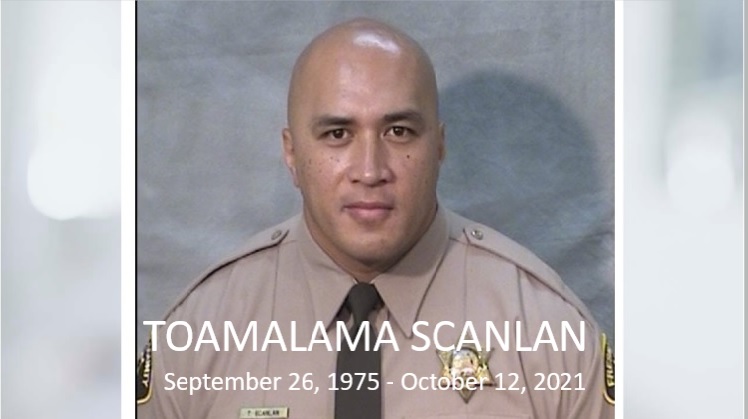 Toamalama Scanlan, 46, died Tuesday at a hospital in Paramount from injuries suffered in a 2016 shooting. (Fresno County Sheriff's Office)
Share with friends

The procession is expected to enter Fresno County at about 2 p.m. The route will take his body in front of the Fresno County Jail and Sheriff’s Office headquarters before ending at Chapel of the Light, 1620 W. Belmont Ave.

Scanlan, who was severely injured during a shooting in the main jail lobby in 2016, died Tuesday at Kindred Hospital in Paramount, the Sheriff’s Office said.

Thong Vang of Fresno opened fire in the lobby, seriously injuring Scanlan and fellow officer Juanita Davila, both of whom were unarmed. Vang was convicted on two counts of attempted murder and sentenced to 112 years in prison.

Since the shooting Scanlan, 46, had been hospitalized and trying to recover from severely debilitating injuries.

Began Career With Probation Office in 1998

Scanlan began his career with Fresno County Probation in 1998 and then joined the Sheriff’s Office eight years later. He was promoted to Correctional Officer IV in 2012.

Scanlan played defensive end for the Fresno State football team in the mid-1990s. Although undersized, Scanlan earned the praise of Coach Jim Sweeny for his relentless pass rushes.

He is survived by his wife, Tepatasi, and six children.