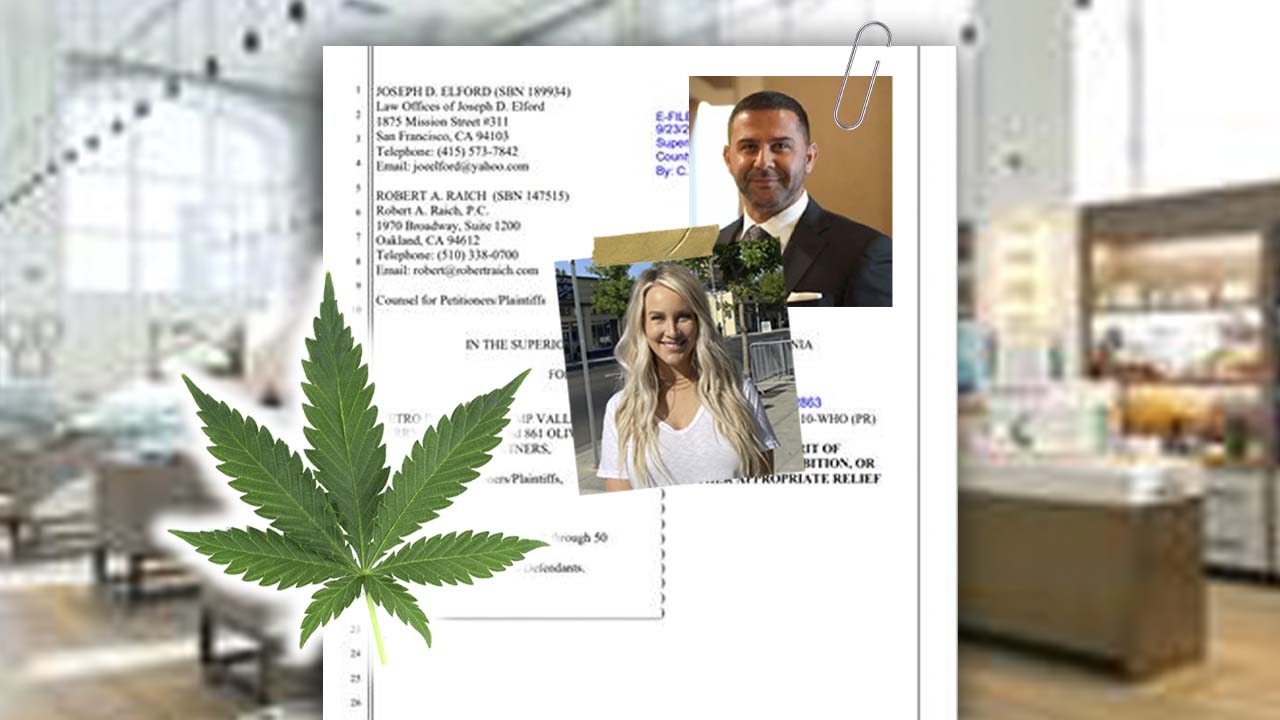 A new lawsuit claims that the city of Fresno’s scoring system for retail cannabis applicants was flawed and unfair. The plaintiffs are asking a judge to put a halt to the system.

Pietro De Santis and Kerry Burrough were among 113 applicants hoping to strike it rich in the “green rush.” But, they said, because of the vague nature of how the applications were scored, they may have lost out on millions of dollars.

“Once we received the breakdown of the scoring, our scores were blatantly wrong.” — Kerry Burrough, cannabis license applicant

“We just want the scoring redone. We want it to be a fair scoring and give us an opportunity to be able to be re-scored or appeal our (current) scoring,” Burrough said.

The lawsuit, filed last month in Fresno County Superior Court, alleges the city’s process wasn’t transparent nor was it carried out according to the laws passed by the Fresno City Council.

“In making its determinations to deny Petitioners’ applications, the City violated not one, but several tenants of constitutional due process,” the lawsuit alleges.

The lawsuit asks for a judge to prevent the city from issuing more commercial cannabis licenses and to invalidate the 21 issued licenses. It also asks the judge to reinstate the applications filed by separate groups led by De Santis and Burrough.

The case is Pietro De Santis vs. City of Fresno. The city had not been served as of Monday with the lawsuit. No court date has been set.

Issuing the cannabis licenses is the responsibility of Fresno City Manager Thomas Esqueda.

“We’ve been carrying it out the system consistent with our understanding of the intent of the ordinance. So that’s where I need to understand what are these comments about the fairness and how does that relate to how the ordinance was written?” said Esqueda, who hadn’t seen the lawsuit.

“If we did what we’re supposed to do and people say the ordinance is wrong, well, then let’s fix that.”

Two — a store-branded Atrium and one branded The Green Door — were at the intersections of Blackstone and Gettsyburg avenues. Despite their proximity to each other, the stores were in separate city council districts. Licenses are limited to three per district. Because cannabis retail locations have to be 800 feet apart, only one of those locations was eligible for approval.

A third De Santis application was for another Atrium at 1133 E. Olive Ave.

Burrough and her business partners applied to open Towertopia in the former Chicken Pie Shop at 861 E. Olive Ave. They have invested more than $1 million so far in buying the former eatery and adjacent parking lot, Burrough said.

Towertopia estimated being in the black in the first year and a $4.2 million net income by year five. 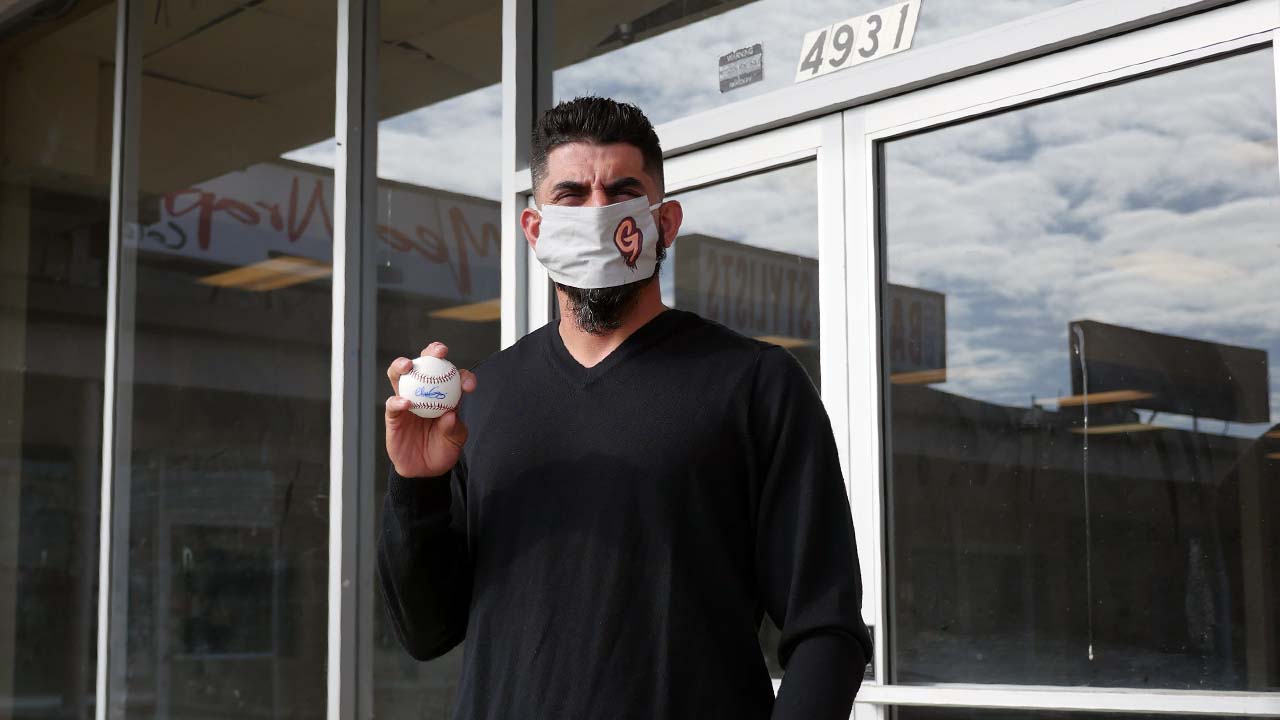 The lawsuit alleges that the city manager did not follow the direction of the city council for an objective scoring system. It called the process “arbitrary” and claimed that it deprived applicants of their due process rights by not revealing details of the scores. 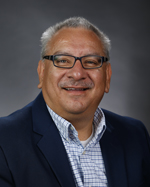 “If we did what we’re supposed to do and people say the ordinance is wrong, well, then let’s fix that.” — Fresno City Manager Thomas Esqueda

“The City Manager, instead, set forth a tangled list of criteria that were not objective and did not provide a scoring system (or quantitative equivalent) tethered to the criteria articulated by the City Council,” the lawsuit alleges. “Petitioners and the public will be left guessing how CCB Permit applications are evaluated, which opens the door for arbitrariness, corruption, and graft.”

More than 110 applicants filed for the chance to land one of the 21 permits. Originally the plan called for 14 permits but the city council added seven more.

Retail cannabis applicants faced four phases of scrutiny to land one of the coveted licenses.

Phase II was a review of the application, with a perfect score totaling 1,600 points. The lawsuit says that how applicants earned points wasn’t made clear.

Atrium Fresno South, on Olive Avenue, scored last among the District 1 applicants with a 59% score. Towertopia placed eighth in the same district (72%).

De Santis’s applications on the Blackstone/Gettysburg corridor finished 10th out of 11 applicants in District 4 (59%); and eighth out of 10 (59%) in District 7.

“Based on the information provided during the CCB Permit application process: it has been determined that your application WILL NOT proceed to the next phase of the application review process at this time and is considered denied,” the city told De Santis in a June 25 letter.

Related Story: ‘If You Build It, They Will Come’: California Desert Cashes in on ...

Burrough discovered how Towertopia scored in Phase II through a Public Records Act request. The city eventually posted the specific scoring on its website.

Towertopia received a zero in several areas, including where customers can file a complaint. But Burrough discovered errors in other criteria that received a zero score.

“Once we received the breakdown of the scoring, our scores were blatantly wrong,” Burrough said.

Those errors cost her moving on to the next round, Burrough said.

“Even if we got 50% scoring on the ones where they said no information was provided, we would have still made top five and moved on to Phase III (interview round),” Burrough said. “I’m fine not getting a license if I’m the one who messed up on the interview process. That’s fine. Not even making it to that process is what really hurt us.” 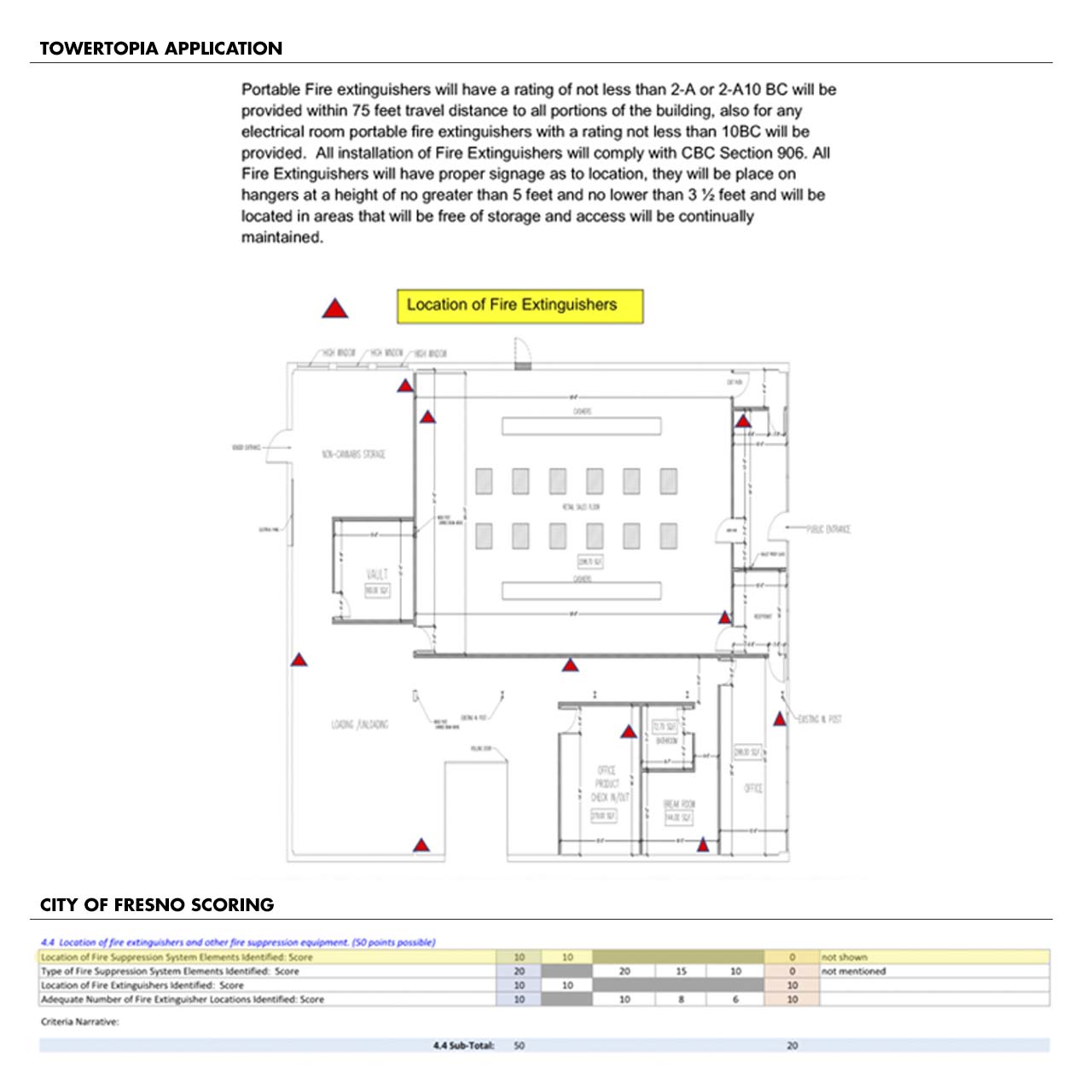 A look at Towertopia’s application regarding fire extinguishers, and the city’s scoring of that criteria.

Only city council members, the mayor, or “approved applicants” are allowed to appeal the 21 preliminary retail licenses.

Council members have challenged five of the preliminary licenses. The council is scheduled to hear those appeals at an Oct. 27 meeting.

“It’ll be interesting. They haven’t given too much information on how that meeting is going to play out. We’ll definitely be there,” Burrough said. “We’ll have this support from city members and other business owners in the area.”

GV Wire is aware of at least one other potential litigant. George Boyadjian filed a claim for damages with the city. He applied for a social equity permit but was disqualified for contacting the city council — a violation of the cannabis application process.

That claim is pending.