Blowin' in the Wind: Giants Edge Dodgers 1-0 on Longoria HR 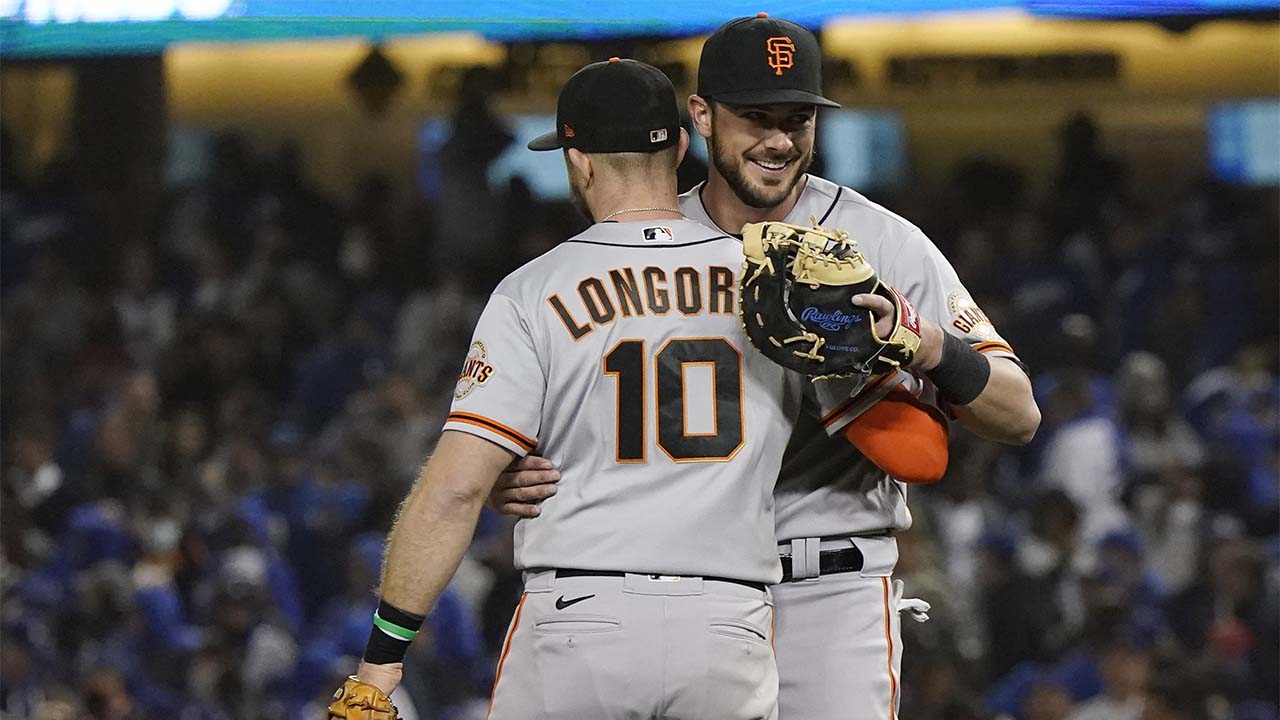 Longoria’s shot in the fifth inning held up, giving the Giants a 1-0 win over the Los Angeles Dodgers on a cold, blustery Monday night with conditions more akin to San Francisco. The Giants took a 2-1 lead in the NL Division Series.

“I don’t remember a lot of nights at Dodger Stadium where the wind was blowing like that,” said San Francisco manager Gabe Kapler, who grew up in Los Angeles. “Super strange.”

Strong Winds a Factor in the Game

The gusty winds whipped the flags in center field and even caused Scherzer to stumble delivering an early pitch.

“The wind was really pushing me towards home plate,” said Scherzer, who lost a postseason game he started for the first time since Oct. 12, 2017, against the Chicago Cubs.

Los Angeles nearly tied it with two outs in the ninth, when Lux launched a long drive to left-center with an exit velocity of 107 mph and an estimated batting average of .890, according to Statcast. But the wind knocked it down and the ball was caught on the warning track, leaving Lux in disbelief.

“My stomach pretty much sank when he hit it. I couldn’t believe that it didn’t go,” Longoria said. “I guess it was our night.”

Taylor flied out to deep right-center with a runner on in the sixth.

“I think any other night the CT ball, the Gavin Lux ball, would have been home runs, yeah,” Dodgers manager Dave Roberts said.

It was the Giants’ second shutout in the best-of-five playoff after winning the opener 4-0.

‘Crazy’ Environment With Sound Dampened by the Wind

Game 4 is Tuesday at Dodger Stadium and Game 5 would be in San Francisco on Thursday, if necessary.

The Dodgers routed their longtime rivals 9-2 to win Game 2, but mustered just five hits back at home. NL batting champion Trea Turner and Mookie Betts each went 0 for 4, and Corey Seager was 0 for 4 with a walk.

“I thought we took some good at-bats and we just didn’t get rewarded,” Roberts said.

Longoria broke out of an 0-for-23 slump in a big way with his leadoff shot on an 0-2 pitch to left-center. It was his first postseason homer since the 2013 ALDS with Tampa Bay.

“Just this environment … this is crazy,” Longoria said. “What a wild night, too — the wind. I mean, I think that the sound in here was kind of dampened by the wind.”

After the home run, Scherzer retired his final six batters. But the Dodgers lost for the first time in his 13 starts with the team since being acquired from Washington at the July 30 trade deadline.

“You get to the postseason, you can always lose by one pitch. That comes into play. Tonight I lost it on one pitch,” Scherzer said.

The Giants’ other two hits were singles by Buster Posey and Kris Bryant. Their final 15 batters were retired, including in the ninth when Dodgers closer Kenley Jansen struck out the side.

Tyler Rogers got the win with 1 2/3 innings of relief. Rookie right-hander Camilo Doval pitched two perfect innings for the save.

Napkins, peanut bags and plastic bags blew on the warning track and through the stands. A dusty haze obliterated the usual picturesque view of the San Gabriel Mountains and kept a pregame flyover from being seen except on the videoboard. A fan’s white cap came flying out of the stands and landed on the field in the second inning.

The fierce wind blew steadily from left field to right throughout the game, ruffling the pants of the pitchers on the mound.

“It’s just part of the game, Mother Nature, and you have to respect that,” said Albert Pujols, who had two of the Dodgers’ three hits.

Scherzer gave up one run and three hits in seven innings. The three-time Cy Young Award winner struck out 10 — his fifth career double-digit postseason strikeout total — and walked one on 110 pitches.

The tension was palpable into the later innings.

Pinch-hitter Steven Souza Jr. and Will Smith had one-out singles in the seventh, the Dodgers’ first back-to-back hits of the game, off submariner Rogers. Pinch-hitter Austin Barnes struck out swinging.

With the sellout crowd of 53,299 on its feet chanting, “Let’s go, Dodgers!”, Betts hit a screaming liner into the glove of leaping shortstop Brandon Crawford to end the threat.

“Just catch the ball, that’s all I’m thinking,” Crawford said. “It had a little bit of topspin on it and it was right over my head so I was able to jump and hope it was in my glove.”

The Dodgers had three hits — all singles — through six innings.

Their first hit came off the bat of the 41-year-old Pujols, whose bloop single to right led off the third in his 75th career postseason game. Along with Pujols, the Dodgers started 37-year-old Scherzer and 36-year-old Justin Turner at third.

It was Pujols’ first start and hit in the playoffs since the 2014 ALDS with the Los Angeles Angels. The three-time NL MVP hit .294 against left-handed pitching during the regular season.

Pujols singled again leading off the fifth for his first multi-hit postseason game since his three-homer performance in Game 3 of the 2011 World Series for St. Louis.

Giants left fielder LaMonte Wade Jr.’s mother missed the first three games of the NLDS because she’s in a competition of her own — a table tennis tournament.

“Shows where her priorities are, but, no, she’s having fun with it. I get videos from my dad,” Wade said. “They will definitely be watching.”

Giants: 2B Tommy LaStella exited in the sixth because of left Achilles tightness.

The only other time the Giants won a postseason game 1-0 on a home run it came on a drive by Casey Stengel in the 1923 World Series against the New York Yankees. Stengel, of course, later became a Hall of Fame manager for the Yankees.

Dodgers: Roberts said in regards to a starter that “everything’s on the table.”