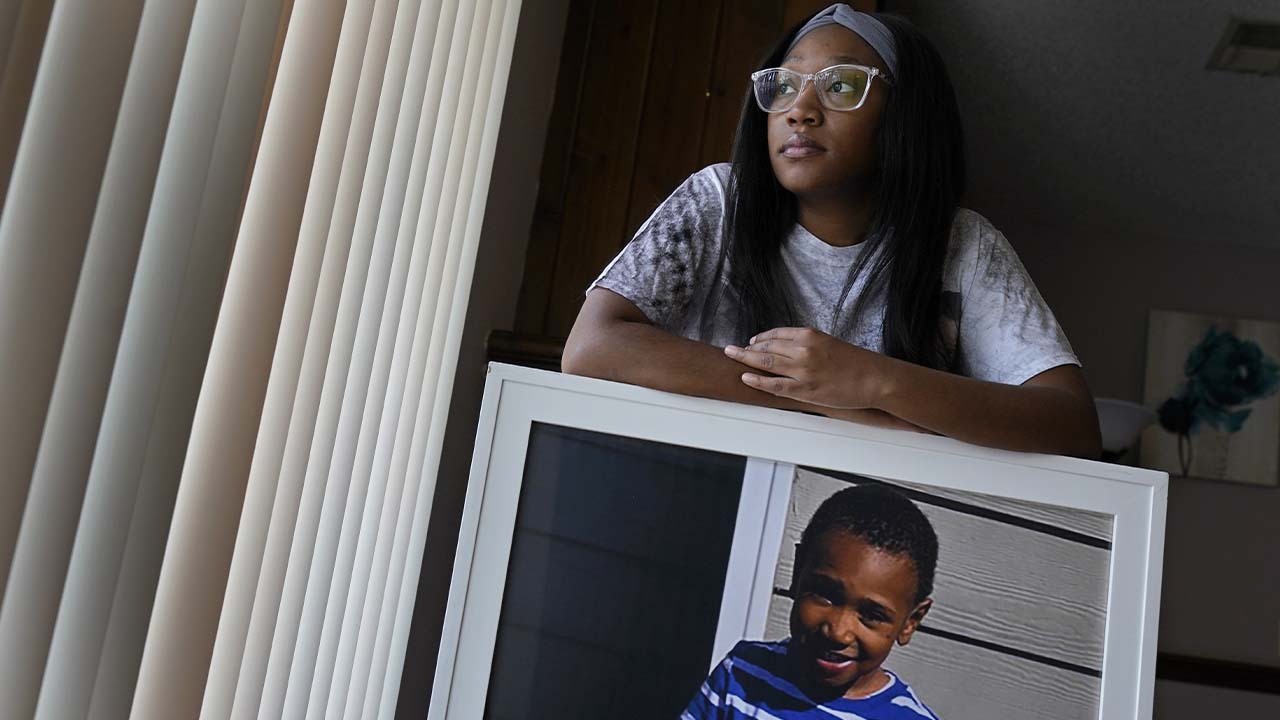 Charron Powell with a photo of her son, LeGend Talieferro, who was 4 years old when he was fatally shot in 2020. (AP Photo/Charlie Riedel)
Share with friends

ST. LOUIS — Gun violence is killing an increasing number of American children, from toddlers caught in crossfires to teenagers gunned down in turf wars, drug squabbles or for posting the wrong thing on social media.

Shootings involving children and teenagers have been on the rise in recent years, and 2021 is no exception. Experts say idleness caused by the COVID-19 pandemic shares the blame with easy access to guns and disputes that too often end with gunfire.

Homicides Among the Young Rose Over 20%

LeGend Taliferro, a 4-year-old boy who loved dinosaurs and basketball, was sleeping on the floor in an apartment in Kansas City, Missouri, when he was shot on June 29, 2020. A man who had been involved in a dispute with LeGend’s father is awaiting trial for second-degree murder. A probable cause statement said the suspected shooter had been trying to find LeGend’s dad after that altercation.

“Why do we have to resort to violence because we’re mad?” LeGend’s mother, Charron Powell, asks. “What are other ways we can figure out an issue without harming somebody?”

The U.S. saw 991 gun violence deaths among people 17 or younger in 2019, according to the website Gun Violence Archive, which tracks shootings from more than 7,500 law enforcement, media, government and commercial sources. That number spiked to 1,375 in 2020 and this year is on pace to be worse. Through Monday, shootings had claimed 1,179 young lives and left 3,292 youths injured.

FBI data backs that up. The agency released a report on Sept. 28 showing homicides in the U.S. increased nearly 30% in 2020, and homicides among people ages 19 and younger rose more than 21%.

In St. Louis, 9-year-old Caion Greene died in March when someone opened fire on his family’s car. A 17-year-old is charged in the crime. Police and prosecutors have declined to discuss a motive or say what prompted the shooting.

Two Minneapolis children were gunned down in May. Nine-year-old Trinity Ottoson-Smith was shot in the head while jumping on a trampoline. Police said she was the unintended victim of a bullet meant for someone else. No arrests have been made. Six-year-old Aniya Allen was shot when her mother drove her car through a gun battle.

On Oct. 2 in Milwaukee, an 11-year-old girl was killed and a 5-year-old girl was injured when someone fired into their family’s car from another vehicle. Police have not said if they know of a motive and are seeking information from the public.

More Often, the Victims Are Teenagers

Jamari Williams and Kentrell McNeal, both 15-year-old students at Simeon Career Academy High School in Chicago, were killed in separate shootings on Sept. 21. No arrests have been made and police declined to speculate on what led to the shootings.

At Philadelphia’s Simon Gratz High School Mastery Charter, five students were killed and nine others were shot or shot at during the last school year. Just weeks into the new school year, two students and a recent graduate have been killed. The school offers a space for memorials to slain students, often helps with funeral expenses and offers counseling services.

A March report from the Children’s Defense Fund found that child and teen shooting deaths reached a 19-year high in 2017 and have remained elevated. Black children and teenagers were four times more likely than whites to be fatally shot.

Guns More Available on the Street After Pandemic Sales

The fund’s president and CEO, the Rev. Starsky Wilson, said a spike in gun sales during the pandemic has made things worse.

“There are more guns available on the street and there are folks with less opportunity to engage in productive activity,” Wilson said. “A combination of those two is really challenging.”

“Social media makes it so easy to throw that disrespect,” Smith said. “They’re doing it in real time.”

“It’s not uncommon that we see a child with a big scar and we say, ‘What happened?’ and they say, ‘Oh, I was shot once before,'” Clukies said.

“It’s so frustrating as a medical provider because we obviously pride ourselves in taking amazing care of kids and saving lives and fixing lives, but these injuries are preventable,” Clukies said. “There’s nothing that compares to having to tell a parent that their child passed away from a completely preventable thing.”

The Justice Department sought to address the violence through “Operation Legend,”named for LeGend Taliferro. His mother takes comfort in the fact that her son’s death helped spur a national effort that resulted in hundreds of arrests. Still, the pain never goes away.

“It’s really a mental battle to get through every day,” Powell said. “It’s really difficult to know he’s not here and I won’t hear his voice.”

On the day before Father’s Day last year, someone fired shots at a group of boys on the front porch of a Chicago home. The bullet missed the boys but pierced a window into the dining room where 13-year-old Amaria Jones was showing her mom a dance routine she was perfecting for TikTok.

The bullet shattered a TV and everyone scattered for safety. When Amaria’s mother returned, she found her daughter on the floor, holding her wounded neck and trying to call out, “Mom.” Amaria was pronounced dead at a hospital. No arrests have been made.

“I grew up in this neighborhood and I’ve been around a lot of gun violence,” Mercedes Jones, Amaria’s 28-year-old sister, said. “I’ve ducked bullets flying near my head. I’m used to that. Not Amaria. She didn’t hang out like me. She didn’t know that lifestyle.”

Shootings Are as Brutal as They Are Brazen

While small children are often caught in the crossfire, teenagers are most commonly targeted — often by other teenagers — in drive-by shootings on interstate highways or gunned down in broad daylight on urban streets.

Shaquille Barbour of Philadelphia was killed June 6, a week before his high school graduation — shot 13 times as he rode his bike home from a corner store. No arrests have been made, and police aren’t offering a motive.

His father, Joseph Barbour, still struggles to hold back the anger.

“I don’t think people know how hard it is, not to want to retaliate,” he said. “These kids are on the street, and it feels like they’re hunters. They brag and taunt people after they kill someone, too.”

Smith, the Philadelphia detective, said the shootings are as brutal as they are brazen.

“They will empty an entire magazine into someone’s torso or their head,” he said. “They call it walking a person down. They shoot a person and incapacitate them … then walk them down, walk until they are standing over them and unload their firearm into that individual.”

Efforts and Ideas to Slow the Violence are Varied

Studies have shown that victims of violence are at an elevated risk of becoming violent themselves. So St. Louis Children’s Hospital developed its Victims of Violence program that seeks to reduce recidivism by pairing surviving shooting victims with mentors and offering counseling, mediation and a link to social service agencies.

In Philadelphia, Chief Inspector Frank Vanore said police also monitor social media and if they’re aware of a feud, a team of officers and community leaders meet with those involved in the dispute.

A pilot program this year at Philadelphia’s Simon Gratz high will provide intensive services to students in danger of becoming a victim — or a perpetrator — of gun violence.

“We are going to have capacity to get about 60 students into the program but with the number of students we’ve lost, the amount of violence and guns that Philadelphia is seeing, we know there will be more students who need this program than we can get in,” Dunn said. “We know it.”