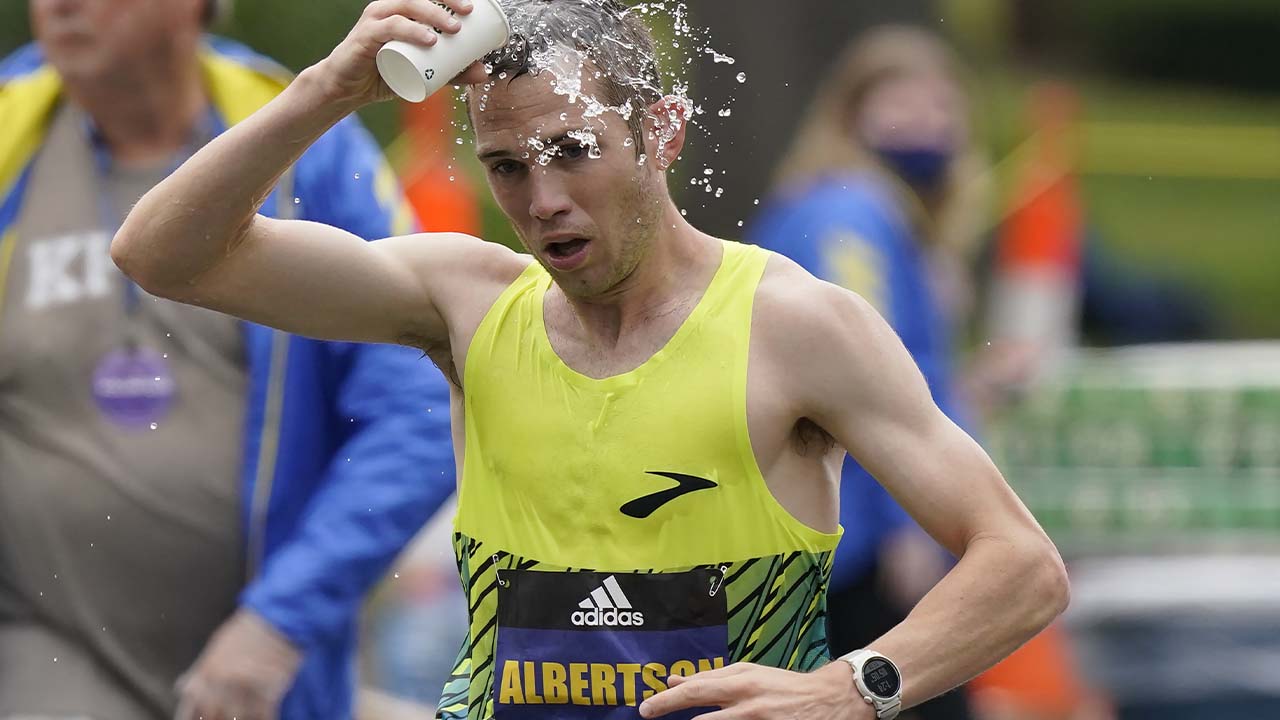 CJ Albertson, of Fresno, pours water on his head while running in the 125th Boston Marathon. He finished 10th overall. (AP/Steven Senne)
Share with friends

Yes, that was Clovis Community College coach CJ Albertson celebrating his 28th birthday by leading the Boston Marathon for more than half of the race on Monday.

“I’m the best downhill runner in the world and I honestly wholeheartedly believe that. I wasn’t running hard, I’m just really good at downhills.” — CJ Albertson of Fresno

Television cameras focused on Alberston all the way to the Newton Hills as he lead by as many as two minutes. He finally got caught near Boston College and finished 10th overall in his first Boston Marathon.

Albertson is the world record holder in the 50K (31.07 miles). He ran his first marathon three years ago and later qualified for the Olympic trials.

He told reporters in Boston after the race that he tried to keep things interesting during the pandemic by binging on Peloton classes — he finished atop the leaderboard 57 times and set a record by running a 2:09 marathon on the treadmill. 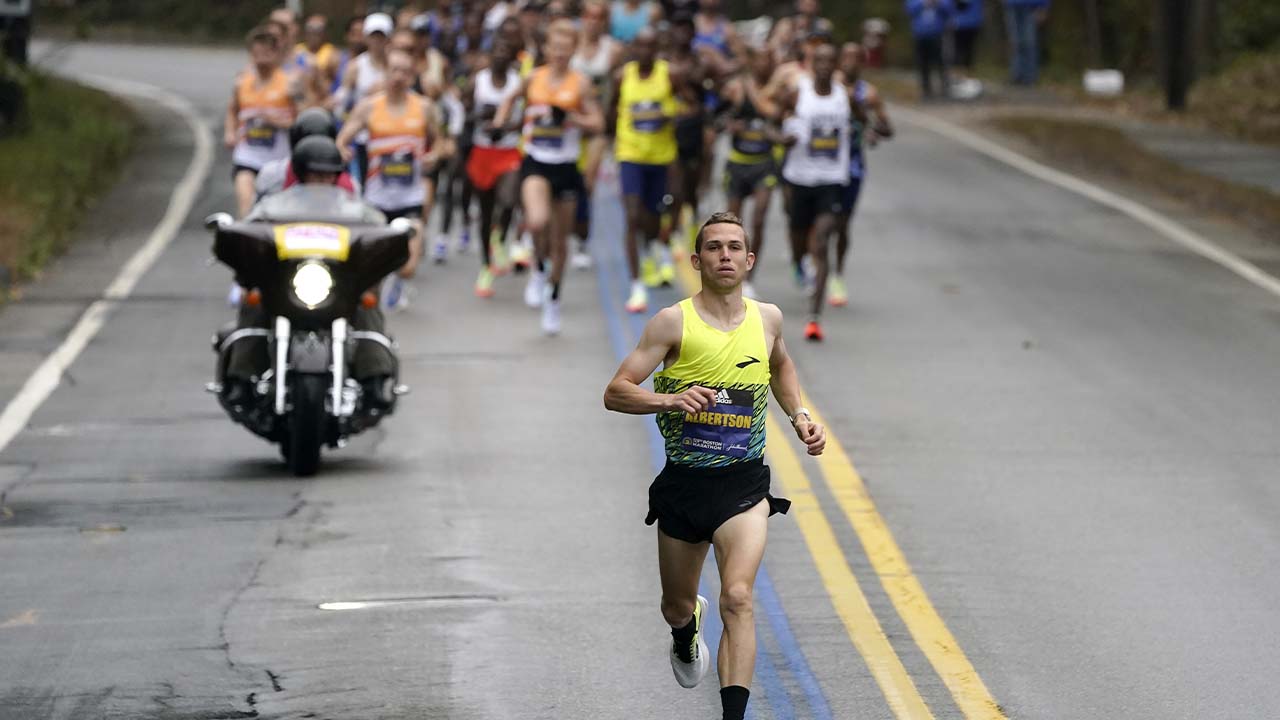 “I was just bored and unmotivated, trying to find something to do. I just made stuff up,” Albertson said. “Having a race like Boston … actually racing and competing with the world’s best in one of the best atmospheres there is to run in — second to Fresno — nothing else compares. This was an amazing day.

“I’m the best downhill runner in the world and I honestly wholeheartedly believe that. I wasn’t running hard, I’m just really good at downhills. I knew that if I hung back with the pack, anytime we hit a hill I’d hit a drop and there was no way I’d be competitive at all.”

Benson Kipruto and Diana Kipyogei completed a Kenyan sweep — the eighth since 2000 at the world’s oldest and most prestigious 26.2-miler, which moved from its traditional spring date for the first time in its 125-year history because of the coronavirus outbreak.

Participants in the field of 18,000 — down from more than 30,000 in pre-pandemic days — needed to test negative for the coronavirus or prove they were vaccinated before picking up their bib numbers. Masks were required indoors in Boston and on the buses out to the start; they also were handed out along with the finishers’ medals and fruit on Boylston Street.

Alberston surprised many watchers by ripping through the first mile in 4:30 and building a big lead.

“I wanted to run 19 minutes for the first four miles and was a little quicker than that,” Albertson said. I didn’t realize how much downhill there was. I just ran my race.”

Albertson was born and raised in Fresno and graduated from Buchanan High School, where he was part of seven Valley Championships teams (four in track, three in cross country), and a Central Section individual champion in cross country and track.

Albertson and his wife are expecting a baby in three weeks. 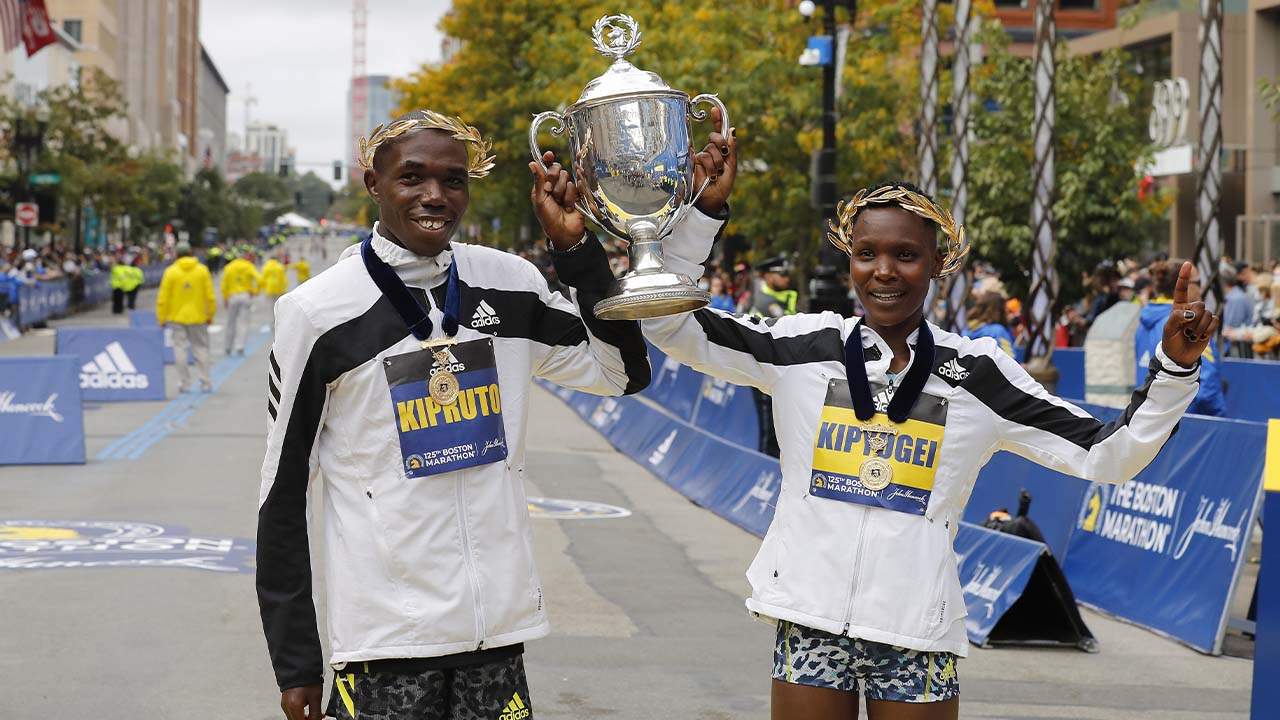 Benson Kipruto, left, and Diana Kipyogei, both of Kenya, celebrate winning the men’s and women’s divisions of the 125th Boston Marathon on Monday, Oct. 11, 2021, in Boston. (AP/Winslow Townson)