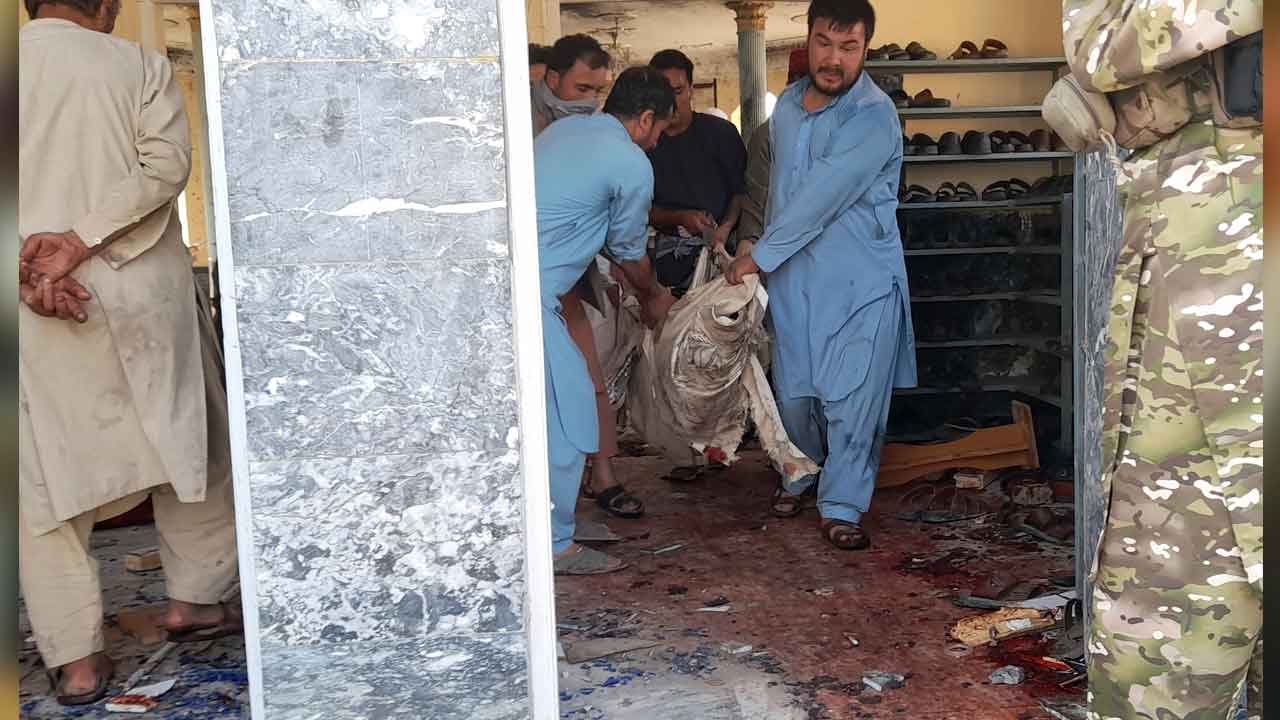 People carry the body of a victim following a bombing in Kunduz province, northern Afghanistan on Friday. (AP Photo/Abdullah Sahil)
Share with friends

KABUL, Afghanistan — The militant Islamic State group has claimed responsibility for a suicide bombing at a Shiite Muslim mosque in northern Afghanistan that killed at least 46 people and wounded dozens.

The claim, carried by the IS-linked Aamaq news agency and cited by the SITE Intelligence Group, which monitors militant postings, came just hours after the blast tore through the packed mosque in the city of Kunduz on Friday.

The attack was the latest in a series of IS bombings and shootings that have targeted Afghanistan’s new Taliban rulers, as well as religious institutions and members of the country’s minority Shiites.

KABUL, Afghanistan (AP) — A blast went off Friday at a mosque packed with Shiite Muslim worshippers in northern Afghanistan, killing at least 46 people and wounding dozens in the latest security challenge to the Taliban as they transition from insurgency to governance.

The explosion tore through a mosque in the city of Kunduz during noon prayers, the highlight of the Muslim religious week. It blew out windows, charred the ceiling and scattered debris and twisted metal across the floor. Rescuers carried one body out on a stretcher and another in a blanket. Blood stains covered the front steps.

Area resident Hussaindad Rezayee said he rushed to the mosque when he heard the explosion, just as prayers started. “I came to look for my relatives, the mosque was full,” he said.

There was no immediate claim of responsibility for what Kunduz police said may have been a suicide attack. But militants from a local Islamic State affiliate have a long history of attacking Afghanistan’s ethnic and religious minorities.

The worshippers targeted Friday were Hazaras, who have long suffered from double discrimination as an ethnic minority and as followers of Shiite Islam in a majority Sunni country.

The Islamic State group has been behind a rise in attacks, including against the Taliban, since the departure of U.S. and NATO forces from Afghanistan at the end of August. IS and the Taliban, who seized control of the country with the exit of the foreign troops, are strategic rivals. IS militants have targeted Taliban positions and attempted to recruit members from their ranks.

In the past, the Taliban managed to contain the IS threat in tandem with U.S. and Afghan airstrikes. Without these, it remains unclear whether the Taliban can suppress what appears to be a growing IS footprint. The militants, once confined to the east, have penetrated the capital of Kabul and other provinces with new attacks.

This comes at a critical moment, as the Taliban attempt to consolidate power and transform their guerrilla fighters into a structured police and security force. But while the group attempts to project an air of authority through reports of raids and arrests of IS members, it remains unclear if it has the capability to protect soft targets, including religious institutions.

In Kunduz, police officials were still picking up the pieces Friday at the Gozar-e-Sayed Abad Mosque.

Citing preliminary reports, the deputy Taliban police chief of Kunduz province, Dost Mohammad Obaida, said more than 100 people had been killed or wounded, and that he believed the dead outnumbered the wounded.

Hours after his initial statement, Taliban spokesman Bilal Karimi told The Associated Press that 46 worshipers were killed and 143 wounded in the explosion. He said an investigation was underway to determine the perpetrators .

The death toll of 46 is the highest in an attack since foreign troops left Afghanistan.

The United Nations mission in Afghanistan condemned the attack as “part of a disturbing pattern of violence” targeting religious institutions.

Obaida, the deputy police chief, pledged to protect minorities in the province. “I assure our Shiite brothers that the Taliban are prepared to ensure their safety,” he said.

The new tone struck by the Taliban, at least in Kunduz, is in sharp contrast to the well-documented history of Taliban fighters committing a litany of atrocities against minorities, including Hazaras. The Taliban, now feeling the weight of governing, employed similar tactics to those of IS during their 20-year insurgency, including suicide bombings and shooting ambushes.

And they have not halted attacks on Hazaras.

Earlier this week, a report by Amnesty International found the Taliban unlawfully killed 13 Hazaras, including a 17-year-old girl, in Daykundi province, after members of the security forces of the former government surrendered.

In Kunduz province, Hazaras make up about 6% of the province’s population of nearly 1 million people. The province also has a large ethnic Uzbek population that has been targeted for recruitment by the IS, which is closely aligned with the militant Islamic Movement of Uzbekistan.

Third Attack on Place of Worship in a Week

Friday’s attack was the third to target a place of worship or religious study in a week.

IS has also claimed two deadly bombings in Kabul, including the horrific Aug. 26 bombing that killed at least 169 Afghans and 13 U.S. military personnel outside of Kabul airport in the final days of the chaotic American pullout from Afghanistan.

IS also claimed a bombing on Sunday outside Kabul’s Eid Gah Mosque that killed at least five civilians. Another attack on a madrassa, a religious school, in Khost province on Wednesday was not claimed.

If Friday’s attack is claimed by IS, it will also be worrying for Afghanistan’s northern Central Asian neighbors and Russia, which has been courting the Taliban for years as an ally against the creeping IS in the region.