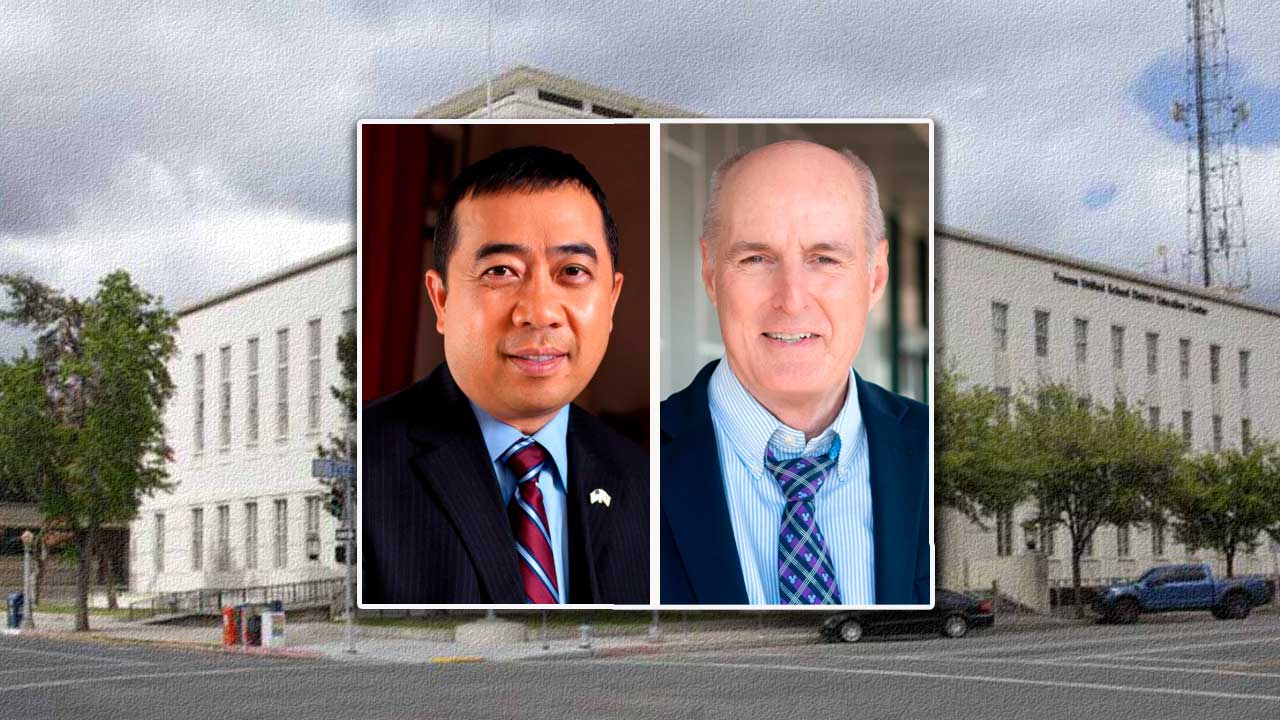 Blong Xiong, left, and Kurt Madden are running for Fresno Unified School Board in the special and regular elections of 2022. (GV Wire/Randy Reed)
Share with friends

Former City Councilman Blong Xiong really does mean to run in April’s special election for the Fresno Unified Area 5 seat, even though the Fresno County campaign website has his campaign’s statement of organization slated for 2024.

Xiong said Friday that when his campaign committee documents were being recorded, there was not yet an option for the 2022 special election for the Fresno High area seat on the School Board, so he put in a placeholder for the 2024 election.

Xiong, now the executive director of the Asian Business Institute and Resource Center, served two four-year terms on the Fresno council before he was termed out. His runs for Congress in 2012 and Fresno County Board of Supervisors in 2014 were unsuccessful.

Xiong and Allen are joined in the Area 5 race by Andy Levine, a Fresno State part-time sociology professor and senior consultant with the nonprofit Faith in the Valley. The winner of the April 12 special election will fill the remainder of the term won last year by Carol Mills, who died July 20 after battling Lou Gehrig’s disease.

Meanwhile, the district’s Bullard High Area 7 race in 2024 is about to get a little more crowded. Kurt Madden, who retired last year as Fresno Unified’s IT honcho, says he’s getting ready to open up a campaign committee but hasn’t filed a campaign intention statement  yet.

Madden is the CEO of Career Nexus, a community initiative of the Fresno Business Council and one of the 19 initiatives of the region’s 10-year investment plan, Fresno DRIVE.

He’s one of two challengers trying to unseat incumbent Terry Slatic, who was elected to his first term in November 2018. Longtime school psychologist Susan Wittrup declared her candidacy earlier.

Assemblyman Kevin Riley, a Republican from the Sacramento suburb of Rocklin, wanted to know why Facebook without any warning whatsoever removed the 18,000-member Reopen California Schools group.

“Facebook must immediately restore Reopen California Schools,” Kiley said Friday in a news release. “Over the last year and half, this group has been a leading voice for parents and a vital source of accurate, up-to-date information about what is happening in schools across our state. Its parent volunteers have worked tirelessly to counter the misinformation propagated by Gavin Newsom, teachers’ unions, and other corrupt officials who have sought to exploit the pandemic for political and financial gain.”

Riley said that Facebook’s censorship was “particularly troubling” since Reopen California Schools is engaged in litigation against the governor, whose decision to close schools and much of the state’s businesses to in-person activities in an effort to slow the spread of the coronavirus helped fuel the unsuccessful campaign to recall him.

The group’s founder noted that members were having difficult connecting to the group starting Wednesday afternoon. A fair number of those group members live here in the Valley.

But apparently it was just a two-day ban — by Friday afternoon, group members were celebrating the group’s return to Facebook, as announced on Twitter.

Thank you @KevinKileyCA, @CBSSacramento, @RedState, @EpochTimes, @politico and others whose pressure/reporting helped FB fix this egregious suppression of parent voices.

Sadly, other groups don’t get this kind of support and succumb to censorship. https://t.co/4VqvLCi5iV